iTunes 12.4 — Apple has released iTunes 12.4 with some design tweaks to simplify the previously ghastly interface. The most notable change is the return of the sidebar as a prominent default screen element. Apple replaced the media kind buttons with a pop-up menu, called the Media Picker, for choosing which media type to view. The company also eliminated the View Options menu — instead, use View > View Options. Finally, the Back and Forward buttons now work across the entire interface, instead of just in the iTunes Store. For more details, see Kirk McElhearn’s write-up for Macworld, as well as a list of minor changes on his personal blog. (Free, 233 MB via direct download or via Software Update, 10.8.5+)

Microsoft Office 2016 15.22 — Microsoft has issued version 15.22 of its Office 2016 suite, which adds support for saving a PowerPoint slide deck as a PDF by using the Save As command. The release adds full support for Arabic and Hebrew in Outlook (including right-to-left layout and editing), enables you to play videos with closed captions or multiple audio tracks in PowerPoint slideshows, and adds more styles for bulleted and numbered lists in Outlook. It also includes version 3.5 of Microsoft Auto Update for Mac to fix an issue that caused the app to crash after downloading updates, and adds
support for the two levels of updates (Slow and Fast) offered by the Office Insider program. On the security front, both Office 2016 15.22 and Office 2011 14.6.4 patch a memory corruption vulnerability that could allow remote users access to execute arbitrary code via an Office document. ($149.99 for one-time purchase, free update through Microsoft AutoUpdate, release notes, 10.10+)

Fantastical 2.2.2 — Flexibits has released Fantastical 2.2.2, adding support for Google Apps rooms and resources when adding invitees, plus support for Public Folders in Exchange. The calendar app adds an option to duplicate events as a reminder from the Edit menu, improves the layout for overlapping events in Day and Week views, adds an option to hide reminders when printing, improves handling of “No response requested” events on Exchange, resolves an issue that prevented some Exchange accounts from syncing in OS X 10.10 Yosemite, and enables you to drag items into a list to reschedule them. ($49.99 new from Flexibits
and the Mac App Store, free update, 13.3 MB, release notes, 10.10+)

Default Folder X 5.0.4 — St. Clair Software has released Default Folder X 5.0.4, a maintenance release for the Open/Save dialog enhancement utility that brings some tweaks and bug fixes. The update now enables you to create a new folder set directly from the Folder Set menu, adds an option to sort the menus for subfolders of recent folders by name instead of by date, allows the toolbar to be aligned with the top of file dialogs (as well as the middle), ensures that a default folder set used once in one application isn’t continually employed in other apps, resolves compatibility issues with Magnet and HyperDock,
and eliminates several crashes and hangs. ($34.95 new, $14.95 upgrade from version 4, TidBITS members save $10 on new copies and $5 on upgrades, 8.7 MB, release notes, 10.10+)

Gemini 2 — MacPaw has released Gemini 2, a major new version of the duplicate file finder utility. In addition to detecting exact duplicates of apps, images, documents, videos, and audio files on your Mac, Gemini 2 can now find “similars” — files that are not 100 percent identical but that could be considered redundant. That might include photos shot from slightly different angles or different file formats of the same song. After scanning, Gemini 2 displays similar files, enabling you to compare them and then decide which to keep. 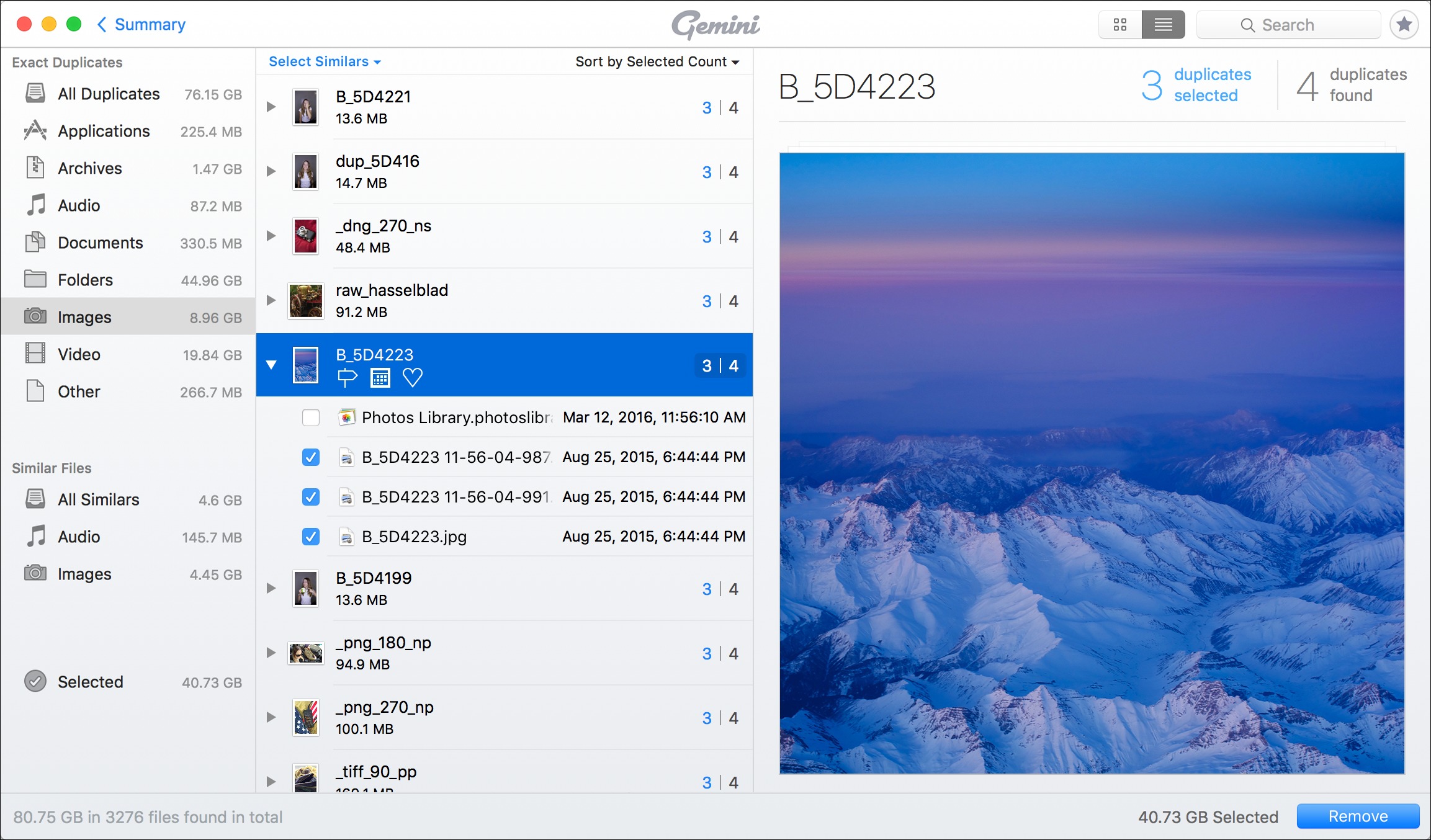 This new release applies a Smart Selection algorithm that remembers rules for files removal, works with iTunes and Photos libraries, and enables you to retrieve a previous scanning session (rather than start a new one from scratch). Regularly priced at $19.95, MacPaw is offering a 50 percent discount on Gemini 2 through 18 May 2016 (as well as the rest of its software titles, including CleanMyMac, CleanMyDrive, Hider, and Encrypto). An upgrade from any previous license costs $9.97, and upgrades purchased through 18 May 2016 receive a second
complimentary gift license. ($19.95 new from MacPaw and the Mac App Store, $9.97 upgrade, 34.8 MB, release notes, 10.10+)