In this age of digital communication, old-fashioned terrestrial radio is still relevant for music, news, sports, and talk. Algorithmic radio alternatives like Pandora are no help when you want local weather warnings, and podcasts aren’t useful when you want live election results or sports scores.

Radio has a lot of advantages: it’s free, local, live, and simple. But it also has a lot of drawbacks. AM/FM radios aren’t as commonplace as they once were, and for many of us can be found only in our cars. Even if you have a radio in your living room or at your desk, it can be hard to get a strong signal from your desired station. And the local aspect is a double-edged sword, as not all programs are available in all markets — try finding a Chicago Cubs game to listen to in the Nashville broadcast area!

The Internet service TuneIn solves these problems by bringing live radio to your Web browser or iOS device via the free TuneIn Radio app (it’s also available in various smart TVs and media-streaming boxes from companies like Roku, and it’s even built into over 55 vehicles). TuneIn isn’t the first company to do this, but a few things set it apart from the alternatives: the interface is straightforward and clean, there’s no pressure to sign up for an account or hand over personal information, and it integrates sources outside of traditional radio, like computer-generated music stations and
podcasts. TuneIn is used by a reported 60 million people worldwide, and it boasts access to 100,000 live radio stations and 4 million on-demand programs.

A search box is the most prominent feature on TuneIn’s home page. If you know exactly what you’re looking for, the search field makes it easy to enter a station’s call sign (“WBUZ”), a genre (“bluegrass”), or a show name (“Acoustic Cafe”). You can also search more broadly, so a search on “Seattle” returns the city name as a genre that encompasses a variety of Seattle-area terrestrial stations, broadcasts related to the Seattle Mariners baseball team and the Seattle Seahawks football team, Internet radio stations with the word “Seattle” in their titles, and even individual show episodes that include “Seattle.”

Unsure what to search for? You can browse TuneIn’s content in the toolbar at the top of the page, split into categories like Local, Music, Sports, News, and Talk. You can also browse stations by location, if you want to scan for interesting stations from Australia, for instance.

TuneIn isn’t limited to radio, as it also hosts Pandora-like artist stations, podcasts, and, if you sign up for TuneIn Premium, audiobooks. More on that shortly.

To play anything in the search results, hover over the album art icon, which causes it to morph into a play button. Clicking the name of the entry reveals additional details, such as broadcast schedules for particular programs. Some talk radio shows list not only live broadcasts but also past episodes. 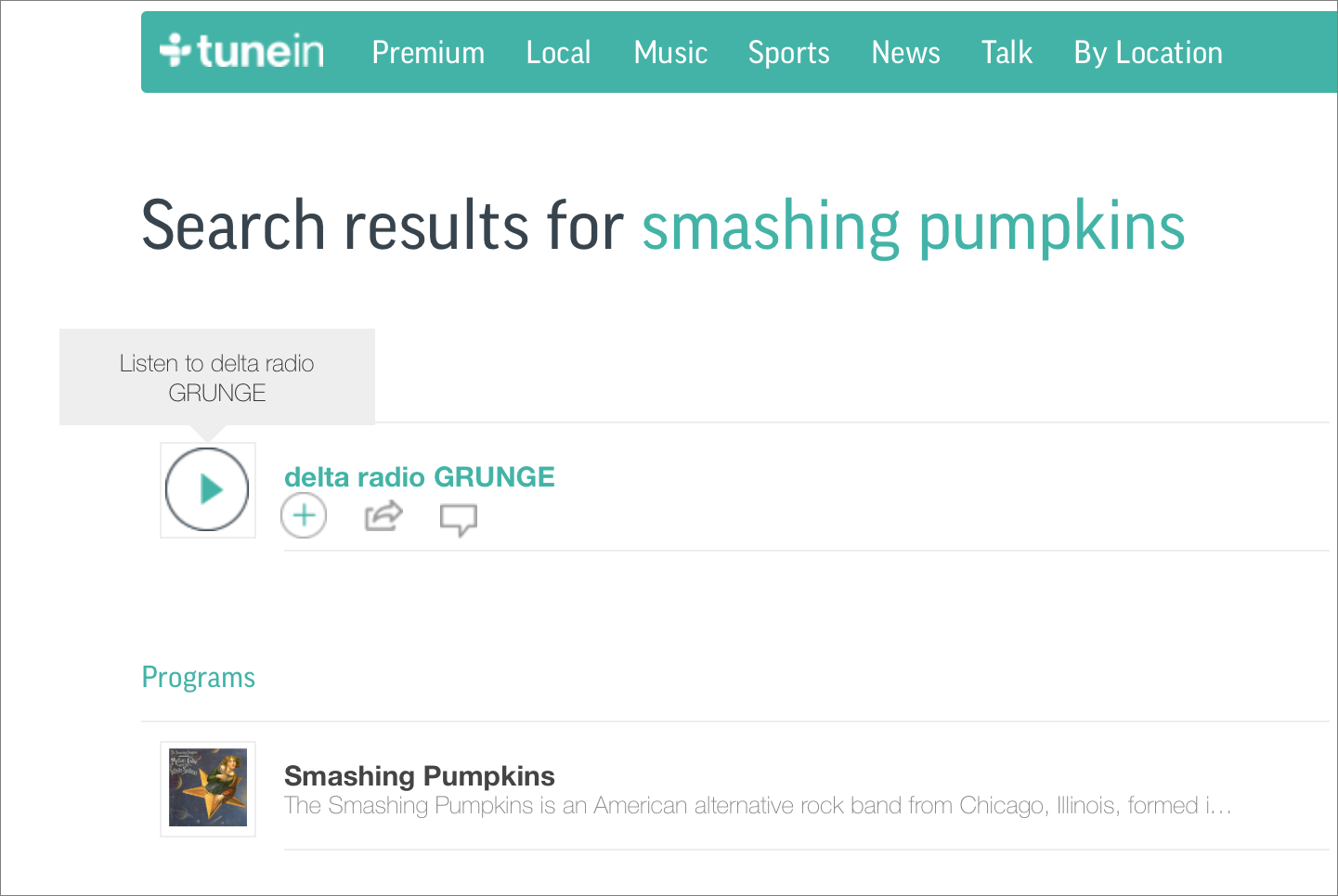 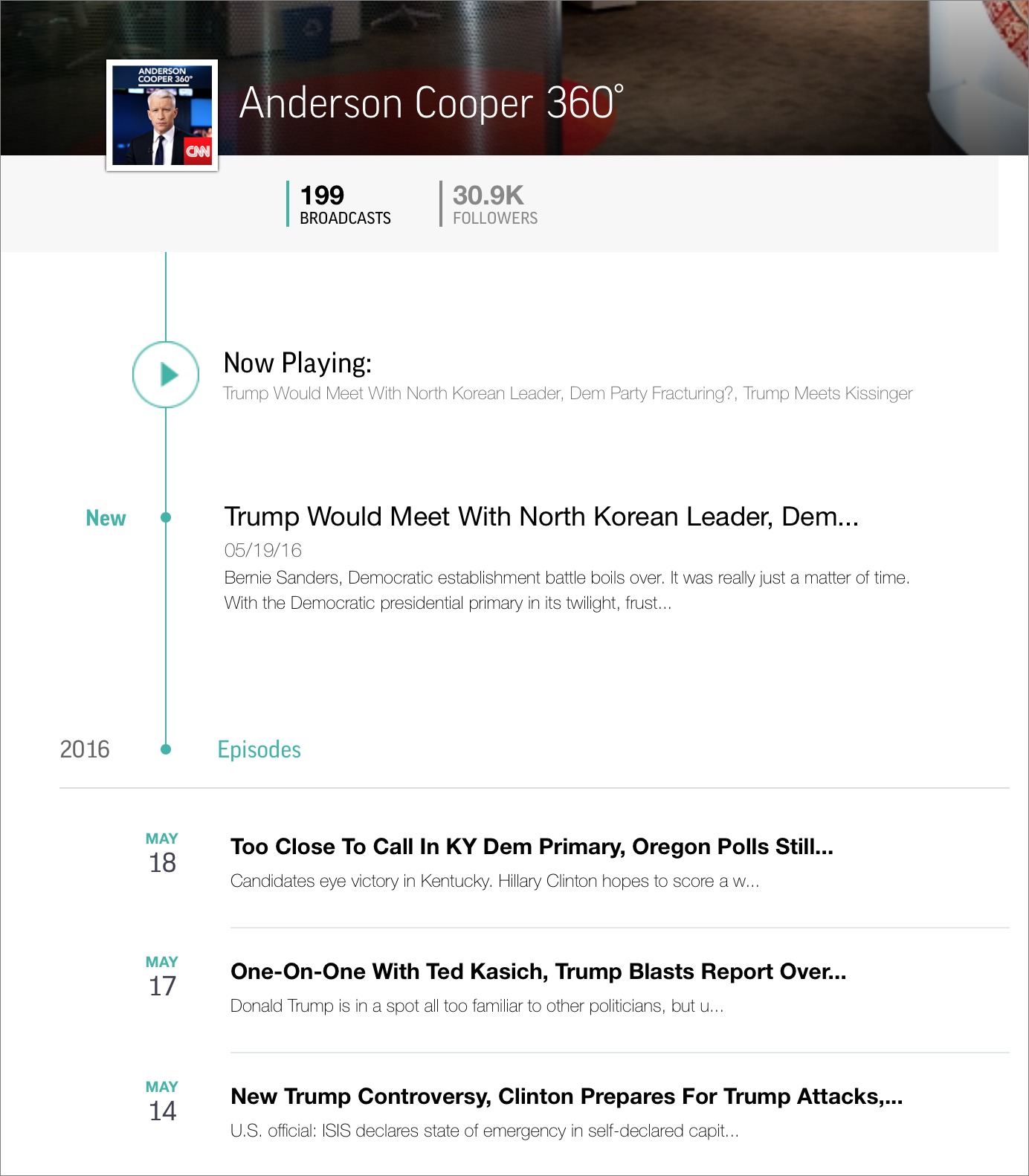 Whenever you’re playing an audio stream, a toolbar with playback controls appears at the bottom of the page. You can even keep browsing without stopping playback. One nice touch is that you can pause a live broadcast and later pick up where you left off. I’m not sure how long you can pause live radio, but I have paused a program
overnight and returned to it the next day with no issues. As with all methods of playing Internet radio stations, the quality can vary; I doubt TuneIn has any control over the streaming software or upstream bandwidth used by the radio stations to which it provides access.

The free TuneIn Radio app works similarly to TuneIn’s Web site but is focused more on browsing than on search. The first tab, Home, displays a number of stations split into categories. Nonetheless, the Search tab lets you search for whatever you want. For those in Apple’s platform ecosystem, the TuneIn Radio app offers an Apple Watch app and CarPlay integration, though no Apple TV app. A separate $9.99 TuneIn Radio Pro app
eliminates banner ads and gives you the option to record what you’re listening to and listen to it later offline, although only within the app itself. TuneIn also makes a version of its app for Android. 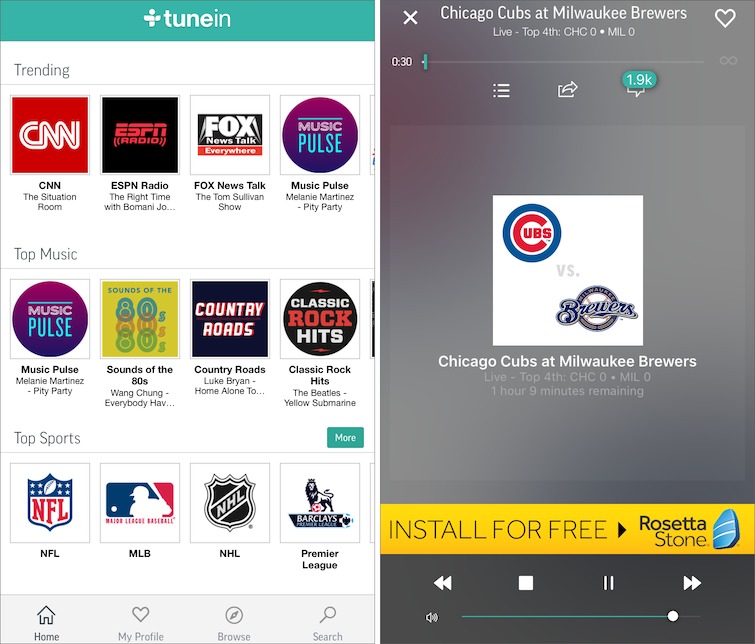 Basic use of TuneIn is free, supported by audio ads that play whenever you first start playing and banner ads in the free mobile apps. Note that commercial stations broadcasting over TuneIn play their own ads, in addition to those TuneIn adds. TuneIn’s additional audio ads aren’t terribly intrusive, perhaps because we’re all used to hearing them on the radio, and they don’t play that often.

However, paying $7.99 per month gets you TuneIn Premium, which removes banner ads from the mobile apps and adds over 600 commercial-free radio stations, a collection of 40,000 audiobooks, and live games from sports stations from Major League Baseball, the National Basketball Association, the National Football League, and Barclays Premier League (soccer). TuneIn Premium also offers some language-learning stations.

If you’re a sports fan, TuneIn Premium may be tempting, but you may not have to pay to listen to sports. ESPN Radio is a free station, and many stations may have live broadcasts of their local sporting events.

TuneIn’s audiobook collection is a bit more exciting, especially since TuneIn Premium is just over half the cost of a standard $14.95 per month Audible subscription. The selection seems to be good. At a glance, I spotted all of George R.R. Martin’s “A Song of Ice and Fire” series, Suzanne Collins’s “The Hunger Games” series, much of Stephen King’s “The Dark Tower,” Aziz Ansari’s “Modern Romance,” Lois Lowry’s “The Giver,” Max Brooks’s “World War Z,” Ernest Cline’s “Ready Player One,” and Amy Poehler’s “Yes Please.”

The potentially significant downside to using TuneIn for audiobooks is that it works only in a streaming mode. That may be acceptable if you listen while on Wi-Fi or if you have an unlimited data plan and solid cellular connectivity, but for most people, the combination of spotty cellular connectivity and data overage fees will weigh against TuneIn audiobook accompaniment on long road trips.

In sum, TuneIn is perfect for those who don’t want to lose touch with a hometown or college radio station, and for people who want to explore music via Internet radio rather than through a free Spotify subscription. It might be a good solution for staying up with a favorite sports team in another location, but your level of success will vary with the sport and the team. For high-profile American sports and English soccer, a TuneIn Premium subscription could be worthwhile if you can’t find a free alternative, but the service’s lack of offline capabilities render the audiobook subscription less appealing.

Comments About TuneIn to Radio Stations Worldwide, Plus Sports and Audiobooks