Alfred 3.0.1 — Running with Crayons has issued Alfred 3.0, a major new release for the keyboard-driven launcher with new features and under-the-hood improvements, plus an overhauled theme editor and improved file navigation. You can download and run Alfred for free with basic functionality, but purchasing the Alfred Powerpack is necessary for access to several of the additions and improvements in version 3, including improved workflow flexibility and object layout; enhanced Clipboard History with the capability to copy images, file lists, and hex colors; and the addition of snippet
auto-expansion (see this announcement blog post for details). Alfred now requires OS X 10.9 Mavericks to take advantage of newer OS X technologies.

Shortly after 3.0’s release, version 3.0.1 appeared, with the maintenance update improving the reliability of automatic snippet expansion (including allowing spaces in snippet keywords), fixing a bug with AppleScript files running twice, improving the reliability of initial migration, and fixing iTunes indexing progress display with some track names. If you purchased a Powerpack license in 2016, you will receive a free upgrade to Alfred 3. For licenses purchased before 2016, you can turn your single user license into a Mega Supporter license (which provides free lifetime upgrades) for £15 (the difference between the £17 single user license and the £32 Mega Supporter license). (Free, £17 for Powerpack, 2.8 MB, release notes, 10.9+)

Slack for Mac 2.0.3 — Slack has released version 2.0.3 of its Mac desktop client with a resolution to the app forgetting some of your teams after a crash and fixes for problems that have affected the sign-in process for some users of the group messaging system and productivity tool. The energetically written release notes (see more about how the Slack team approaches writing release notes) also include this nugget:

There was an understandable backlash to the backslash that attached itself to the front of single or double quotes when replying to notifications, so we took that slapdash backslash and burned it like the bug it was.

Read/post comments about Slack for Mac 2.0.3.

Evernote 6.7 — Evernote has released version 6.7 of its eponymous information management app with changes to the switcher (Command-J) that enable you to switch between tags (in addition to notes and notebooks); the switcher’s matching algorithm can also now recognize possible misspelled searches. The update resolves several crashing bugs, improves sync performance, fixes a bug that prevented high-DPI images from being cropped accurately, corrects an issue that rendered links as plain text, improves business card scan accuracy for ScanSnap Evernote Edition scanners, and fixes a bug that prevents some PDFs from displaying
correctly after being annotated. Note that the Mac App Store remains stuck at version 6.6.1 as of this writing. (Free from Evernote or the Mac App Store, 53.6 MB, release notes, 10.9+)

Cyberduck 5.0 — The Cyberduck team has released version 5.0 of the open-source file transfer app, bringing back support for Google Drive so you can access files without syncing to your desktop. In addition to an updated user interface with new streamlined monochrome toolbar icons, Cyberduck 5 adds an option to use AWS KMS-Managed Keys (SSE-KMS) for server side encryption on Amazon S3, allows repeat failed transfers for single segments of multipart large file transfer (S3, OpenStack Swift, Backblaze B2), and adds support for the Spectra BlackPearl Deep Storage Gateway. Cyberduck is free, though you can support it via a donation or a
$23.99 purchase made through the Mac App Store. (Free, 89.6 MB, release notes) 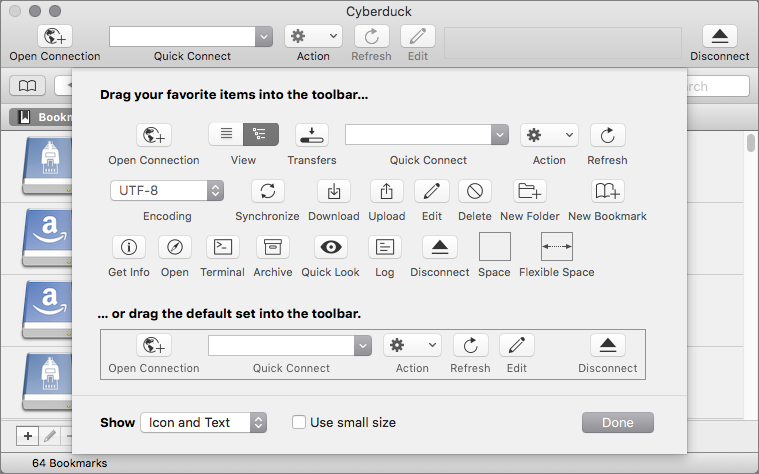 Read/post comments about Tinderbox 6.6 and Storyspace 3.1.2.

CrashPlan 4.7 — Code42 Software has released CrashPlan 4.7, a maintenance update with a number of fixes for the Internet backup software. The update now prevents Time Machine from backing up the CrashPlan app bundle, which was causing high CPU usage for some users. It also fixes a bug that prevented some dialogs from being closed when CrashPlan was in full screen mode in OS X 10.11 El Capitan, translates the menu bar app to non-English localizations, and ensures that files with leading or trailing spaces in the filename backed up from an OS X or Linux computer can be restored to a Windows PC. Note that
CrashPlan 4.7 is the final supported version for 10.7.5 Lion and 10.8 Mountain Lion (as well as Windows XP and Windows Vista). (Free with a 30-day trial of CrashPlan’s online backup service, 73.8 MB, release notes, 10.7.5+)

GraphicConverter 10 — Lemkesoft’s GraphicConverter — the “Swiss Army knife” of graphics programs that can import over 200 different graphic file formats and export almost 80 formats — has been updated to version 10. This major new release adds face recognition capabilities, a Collage feature, a Picture Package feature that simplifies printing multiple copies of an image on one sheet of paper, the capability to use grayscale pictures as custom brushes, simplified access to metadata like EXIF and IPTC, and support for converting Apple’s Live Photos format into an animated GIF. Amongst the vast
number of additions and improvements, GraphicConverter 10 also improves LZW compression of TIFF images, adds a button to open custom fill patterns in the Pattern palette, enhances smart cropping in live previews, enhances the Shadow command, and adds a menu item for scaling images to Facebook sizes.

RapidWeaver 7.0.1 — Realmac has released RapidWeaver 7, a major update to the Web design and publishing software that boasts over 50 new features and enhancements. RapidWeaver gains an overhauled FTP engine for improved speed (and adds an FTP path browser for visually selecting a publishing location), adds a built-in Web server for previewing your entire site within the app, adds the SEO Health Check to help improve your search engine optimization, enables you to store resources inside a Portable Document (so you can move the project between multiple Macs), adds four new responsive design themes, adds a Project
Backup feature, and reduces the app’s user interface “chrome” to provide more work space. The update also removes Quick Look support to reduce file sizes significantly, improves how the Theme Browser handles duplicates, and adds a Web Server Logs window to help diagnose page errors.

Shortly after the release of version 7.0, Realmac issued version 7.0.1 to fix an issue where themes would not be installed in the correct location, resolve a bug that prevented add-on migration from version 6.x, and prompt the user to restart after installing new plug-ins. RapidWeaver is priced at $99, and you can upgrade to version 7 for $59.99 if you have an existing license. ($99 new, $59 upgrade, 87.8 MB, release notes, 10.11+)

Mailplane 3.6.3 — Uncomplex has released Mailplane 3.6.3, reducing the click area of the close tab button to help prevent accidental tab closures. The Gmail-specific email client also adds a Save to Todoist option that sets the email message as a comment instead of putting everything into the content, enables you to set a compression factor if resizing or converting to a JPEG image, plays a sound when a new chat message arrives, updates WebKit to the same version found in Safari 9.1.1, and fixes Mail > Discard and the trash toolbar button for Google Inbox. ($24.95 new, free update, 23.4 MB, release notes, 10.10+)

Capto 1.0.1 — Global Delight has issued Capto 1.0.1, the first maintenance update to the screen capture utility formerly known as Voila. The release now enables you to preview captured images inside the organizer, improves the speed of video exports, lets you shrink the Capto window, adds an option to migrate Voila data into Capto at any time, and fixes a bug that prevented videos from exporting in their original resolution when dragged and dropped outside the app. If you have a Voila or Boom 2 license, you are eligible for a 50 percent discount on Capto through Global Delight’s storefront. Capto is free for those who
purchased a license to Voila on or after 1 October 2015. ($29.99 new from Global Delight with a 25 percent discount for TidBITS members or from the Mac App Store, 20.7 MB, 10.10.5+)

PopChar X 7.5 — Ergonis Software has pushed out PopChar X 7.5, adding support for combined emojis in the Apple Color Emoji font (characters created from “zero width joiner” character sequences, such as couple and family icons). The character discovery utility adds font format information (OpenType, TrueType, PostScript) to the Font Info view, allows use of the Enter key in the keyboard shortcut for opening the PopChar window, enables you to start a search for characters without having to select the search field first, and fixes a bug that resulted in a large empty space when looking for a character in a
collapsed group. (€29.99 new with a 25 percent discount for TidBITS members, free update, 4.6 MB, release notes, 10.6+)

TextExpander 6.0.5 — Smile has released TextExpander 6.0.5 with an improved Snippet Editor that offers better image import and a fix for an issue where the fill-in editor could dismiss slowly. The update to the text-expansion utility also restores Print Group and Print All Groups, retains uncommitted content changes when creating a new snippet, disables Add Group from File when signed out, and adds support for the URL bar in Google Chrome version 50.

1Password 6.3.1 — AgileBits has released 1Password 6.3 for Mac (dubbed “The Passion Project”) with added support for three Web browsers — Vivaldi, Brave, and Opera Developer. The password manager also adds the capability to drag and anchor the Large Type window, improves VoiceOver support (particularly when moving between the sidebar, item list, and item details), and fixes a bug that caused a system slowdown when creating the attachments directory when Time Machine is enabled. The update also changes the behavior of the Command-O keyboard shortcut in 1Password mini so that details are anchored without having to
display item details first, and Lock on Sleep now considers both display sleep and Mac sleep. Hot on the heels of 1Password 6.3, version 6.3.1 adds even more VoiceOver improvements and fixes more bugs. ($49.99 new from AgileBits and the Mac App Store with a 25 percent discount for TidBITS members when purchased from AgileBits, free update, 47.5 MB, release notes, 10.10+)

AirPort Base Station Firmware Update 7.6.7 and 7.7.7 — Apple has released firmware updates for AirPort Extreme and AirPort Time Capsule base stations with 802.11ac Wi-Fi (the tower-like models receive Firmware Update 7.7.7), as well as older AirPort Express, AirPort Extreme, and AirPort Time Capsule models with 802.11n Wi-Fi (Firmware Update 7.6.7). Both updates fix a bug that could prevent communication between clients on the same network, improve performance with an extended guest network, and sort out potential naming conflicts with Bonjour Sleep Proxy. You must update
your AirPort base station using AirPort Utility on your Mac or an iOS device with the free AirPort Utility app installed (the download isn’t available via the Apple Support Web page or Software Update). A few people are reporting problems with these updates, although it’s hard to know how widespread they are. There’s probably no harm in passing on these updates if you’re not experiencing any problems with your network now. If you do decide to update, make sure it’s when some downtime wouldn’t be catastrophic.

Read/post comments about AirPort Base Station Firmware Update 7.6.7 and 7.7.7.

Airfoil 5.1 — Rogue Amoeba has released Airfoil 5.1 with an improved Effects window, which tweaks the layout and labels while also ensuring that the window correctly remembers its state between launches. The wireless audio broadcasting app also updates the Instant On component to version 8.2.6, enables you to right-click on a speaker in the main window to hide it from view, fixes a bug that prevented a local audio play-through preference from being respected, and changes the behavior of pressing the back button when transmitting iTunes so that it rewinds to the beginning of the track rather than moving to the previous
track. The companion Airfoil Satellite iOS app also now receives Retina-quality album artwork (if accessing a Mac with a Retina display). ($29 new with a 20 percent discount for TidBITS members, $15 upgrade, 13.8 MB, release notes, 10.9+)