Apple has announced iOS 10, due this fall, with a public beta opening in July, which you can sign up for now. That said, we don’t recommend that you install beta software on your daily device.

Unfortunately, Apple is dropping support for some older devices with iOS 10: the iPhone 4S, iPad 2, third-generation iPad, and the first-generation iPad mini.

New Lock Screen — Perhaps the most distinctive visual change in iOS 10 is the new Lock screen, which features a new look for notifications. To make them stand out from the background, notifications now appear in light gray bubbles.

More functionally compelling is that you will be able to raise the iPhone to wake up the screen, like the Apple Watch. This change also solves the problem of the Touch ID sensor being so fast that the iPhone unlocks before you can see your notifications.

The Lock screen in iOS 10 will also provide easier access to widgets and the camera: swipe from the left to access a Dashboard-like screen of widgets, or from the right to access the camera.

Control Center also receives a redesign, with a new look and the capability to swipe right to see larger music controls and album art. Unfortunately, it looks like it’s still not user-customizable.

3D Touch will be more useful in iOS 10. You’ll be able to press notifications to display app data without unlocking the iPhone. For instance, you can press an iMessage notification to see that conversation. You can also clear all notifications with 3D Touch.

Similar 3D Touch improvements will also be available on the Home screen. For example, you’ll be able to 3D Touch the Weather app to see a forecast.

Siri Improvements — For years, iOS users have wanted to be able to use Siri to control third-party apps, and with iOS 10, that will finally become possible. Apple has opened Siri up to developers, so we expect Siri support to become widespread.

For instance, you’ll be able to use Siri to call a car with Uber or Lyft, send a message in Slack or WeChat, search for photos on Pinterest, make calls with Skype, send money with Square Cash, and more. Those are just some of the Siri integrations expected at iOS 10’s launch, and we’re sure that many more are on the way.

Emoji Till you Drop — Taking cues from Facebook, Google, Snapchat, and others, the keyboard and Messages apps will be much more expressive in iOS 10.

Apple called Messages iOS’s “most used app,” and it’s receiving a commensurate amount of attention. It moves well beyond simple emoji to incorporate handwritten notes, custom message bubbles, contextual animations, Slack-like reactions and link previews, and the capability to adorn messages with “invisible ink,” so that they’re obscured until the recipient chooses to reveal them. You’ll also be able to take short videos, which you can draw over. 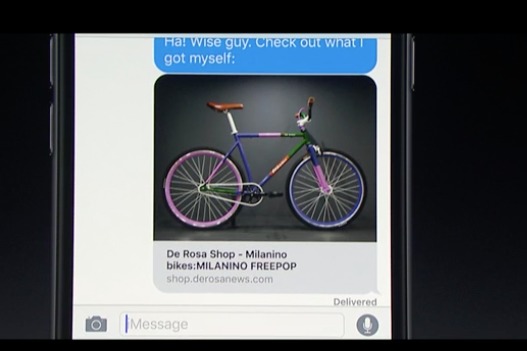 Messages is also being opened to third-party developers, who will be able to add things like stickers to photos shared via Messages. Prepare yourself for thousands of apps that let you dress up your “text” messages.

This additional expressiveness will be available outside of Messages as well. The QuickType keyboard in iOS 10 will suggest emoji as you type and will even let you tap words to replace them with the appropriate emoji. (We’re hoping for a feature that translates emoji into words so we can figure out what some of these emoji-laden messages are supposed to mean.) 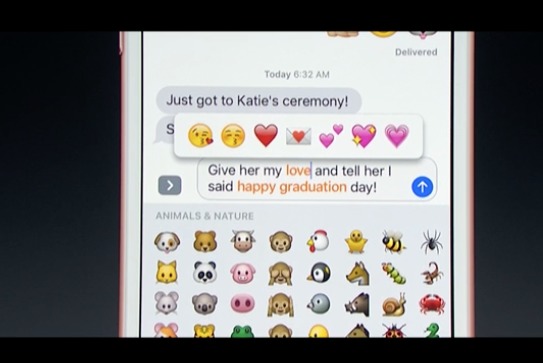 These QuickType changes aren’t just for goofing around. Apple has incorporated Siri’s AI to provide smarter typing suggestions. For instance, if you type “John’s number is…” the QuickType bar will suggest related phone numbers to insert. Apple also says that you’ll be able to type in multiple languages without switching keyboards — we’re curious to see how that will work.

The News about Music — In both Music and News in iOS 10, Apple seems to be experimenting with a new design language that includes big, bold text and large images, both good news for the many users who have struggled with the wisp-thin type of recent iOS releases.

Music in iOS 10 is being redesigned from the ground up to be more clear and simple, with a new Search tab for better discoverability. Apple Music in iOS 10 will also be able to display song lyrics. Apple Music Connect seems to have disappeared in iOS 10, joining its cousin Ping in the afterlife of failed Apple social media experiments. It’s funny; just as Apple doesn’t understand group collaboration, the company also doesn’t get social media. For Apple, it’s always about the individual.

Other than a redesign, the big news about News is that it will support subscriptions to newspapers and magazines, though Apple didn’t provide any details about how publishers might be able to charge for their content.

Photos — The Photos app sees a lot of improvements in iOS 10, especially in regards to browsing your iCloud Photo Library. As it stands, it’s easy to accumulate a huge pile of photos that is impossible to sort through, but Apple intends to change that with iOS 10.

First, Photos for iOS gains a couple of features that iPhoto veterans should remember: the option to view all photos on a map, based on embedded GPS information, and automatic sorting of photos via facial recognition.

But Apple is going deeper than mere facial recognition: Photos in iOS 10 will be able to recognize objects like horses, water, and mountains, making 11 billion calculations per photo to identify features it can categorize.

Photos will then take all of this information and automatically corral your photos into what Apple is calling Memories: automatically generated albums based on date, location, and identified people and features. In theory, Photos will generate Memories with collections of holiday and vacation photos, among other things.

Borrowing from the TimeHop app, Photos in iOS 10 will also remind you of certain Memories so you can revisit them. For instance, if you were on vacation a year ago, it might prompt you to look at those photos.

Memories will also incorporate video, automatically adjusting the play length and adding a soundtrack. You’ll be able to adjust the “mood” of a video and its playback time with a few simple controls.

These features are also coming to macOS Sierra, and the Memories will be viewable in the updated tvOS 10.

Maps — New proactive features in Maps will let you swipe up from the bottom of the screen to receive contextual destination recommendations. For instance, if you have an appointment coming up, Maps will offer directions to that location. It will also let you browse specific types of locations, such as restaurants.

The navigation display in Maps is also improving, automatically adjusting the zoom level and letting you zoom out manually to see upcoming traffic conditions.

Perhaps most importantly, Apple is also opening Maps up to developers, turning the app into a sort of location-based hub. For example, you’ll be able to make OpenTable reservations or summon a car via Uber, all without leaving Maps.

The Rest — The Phone app also gets developer extensions, so the app will finally integrate with third-party VoIP apps like Skype and Vonage. It will also be able to take advantage of spam filters to identify possible telemarketing calls! Fingers crossed that this feature works well, since we’re sick of the non-stop phone spam. 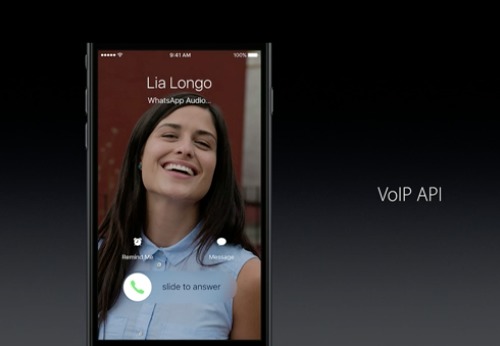 HomeKit is expanding, and along with it comes a new app, called Home, that will let you control all your HomeKit devices in one place. Home automation still largely seems to be a solution seeking a problem, but perhaps HomeKit is the standard that’s necessary to encourage innovation beyond the simple stuff.

Safari on the iPad will offer its own split-screen mode, making it possible to view two Web pages simultaneously. Given the power of Web apps and the need to work in multiple apps at once, that’s essential.

In its one nod to collaboration, Apple said the new version of Notes will allow multiple users to work on the same note at once. Notes seems like an odd place to provide real-time collaboration, but we can hope that Apple is merely dipping its toe in now and plans to make a more general collaboration capability available to developers in the future. We can dream, can’t we? (Note to Apple: please remember change tracking!)

Overall, iOS 10 looks like it will be a welcome release when it makes its public appearance in September or October. While it doesn’t offer a single marquee feature, iOS 10 bundles together so many small improvements that it should all add up to a notably better experience. Our main question is how easy it will be to incorporate these new features into your everyday use; we’ll be evaluating all that while we work on “iOS 10: A Take Control Crash Course.”