As we learned at this year’s WWDC keynote, iOS 10 will include a new Remote app that can emulate all the functions of the fourth-generation Apple TV’s Siri Remote (see “tvOS 10 to Get Improved Siri, Single Sign-on, iOS Remote App,” 13 June 2016). Add this to all the other ways of controlling an Apple TV documented in “Take Control of Apple TV,” such as the Siri Remote, the old Apple Remote, Bluetooth keyboards, and just about any remote you have around the house, and you have no lack of options.

Now there’s one more: CiderTV, an alternative to Apple’s Remote app that works in iOS, OS X, and watchOS. The CiderTV apps are free, but if you want to pair the iOS version with more than one Apple TV, you’ll have to shell out either $3.99 for a second Apple TV or $9.99 for unlimited pairing with multiple Apple TVs.

I had problems with both the OS X and watchOS variants of CiderTV. The OS X version was impressive at first, but later stopped connecting to my Apple TV for reasons I couldn’t figure out, and I found the watchOS version to be utterly inscrutable. So, I’m covering only the iOS version, with a focus on one particular feature.

The key question is: with a snazzy new Remote app on the way, why would you bother with a third-party alternative? The answer is that it offers a Today View widget for Notification Center. Even though the widget isn’t the ideal way to control an Apple TV, requiring individual button taps rather than touchpad-like swipes, what’s fantastic about it is that you can access it from the Lock screen. That solves the common problem of fumbling around on your iPhone, trying to access the Remote app, when you need to pause a movie quickly.

CiderTV’s setup is simple. Just as with Apple’s current Remote app, you go to Settings > Remotes and Devices > Remote App, select the CiderTV app under Pairable Devices, and enter the code the CiderTV iOS app provides.

To set up the Today View widget on your iPhone, pull down Notification Center by swiping down from above the top edge of the screen. Tap the Today tab, swipe down, and tap the Edit button. Swipe down until you see the listing for CiderTV, and then tap the green plus button to add it to your Today View. To access the widget, pull down Notification Center again, go to the Today View, and scroll down until you see the CiderTV widget.

By default, the widget saves space by displaying only two buttons: one to open the CiderTV app and another for Play/Pause. Tapping the down-pointing arrow reveals navigational arrows, the OK button (which acts like pressing the touchpad on the Siri Remote), and the Menu button.

The iOS app itself is not terribly interesting. Just like Apple’s official Remote app, CiderTV offers a touchpad-style swiping surface, the requisite buttons, and it lets you type searches with the onscreen keyboard. One difference is that it offers a few additional gestures. For instance, you can double-tap the touchpad to simulate the Menu button, though it would have been just as easy if the developers had provided a Menu button. They included a Menu button in the widget, but not in the app itself, which is odd. 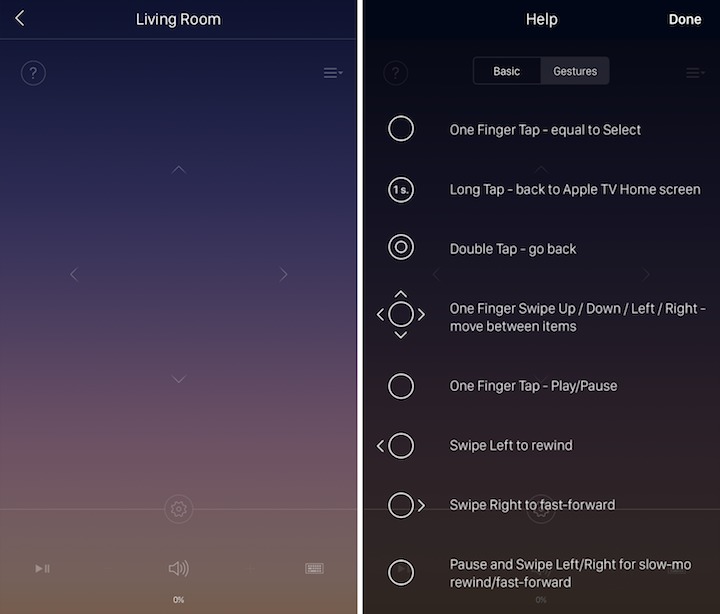 CiderTV offers another potentially useful feature: if you have a certain type of network-connected smart TV, you can use the app to control both the Apple TV and your TV’s volume. That’s nifty in theory, but it doesn’t work with my very recent TV, and chances are that it won’t work with yours. If it does, CiderTV is that much more compelling for you.

The CiderTV apps aren’t spectacular, but the Today View widget is great. Since it works fine side-by-side with the official Remote app, those who want to manage a fourth-generation Apple TV from an iPhone or iPad should give it a try.

Apple TV Entertainment iPhone, iPad, & iOS
Cookies & Privacy: We wish we were talking about chocolate-chip cookies here, but our Web site—like nearly all others—relies on a few minor digital cookies. Various laws around the world require us to tell you that fact, so consider yourself informed, if not nourished. By continuing to use this site, you agree to our use of these cookies. Cookie and Privacy Notice