I’ve never made any bones about the fact that I dislike using Apple’s Calendar app, and have long preferred BusyCal from BusyMac (which is run by John Chaffee and Dave Riggle; the same guys behind the venerable Now Up-to-Date calendar of yesteryear). BusyCal is faster, cleaner, and more obvious than Calendar, while providing a superset of Calendar’s features.

For instance, BusyCal supports the to-do items that Apple exiles to the Reminders app, offers a menu bar companion app for quick schedule checks, provides integrated weather displays, and has a List view that can be a big help when scanning through scores of events.

BusyCal 2 shipped in October 2012, and while BusyMac has pushed out numerous free updates since, the company has lately been focused on the just-published BusyCal 3 for the Mac and the initial release of BusyCal for iOS (which carries the 3.0 version as well).

The big change in BusyCal 3 is the user interface, which BusyMac refined to be more modern, with improved typography and layout. Since many interface preferences are personal, BusyCal 3 gives you even more control over the details, so you can choose among different banner styles, control on which side of an event’s name its time appears in Month view listings, and tweak the size of the text in the Calendar list sidebar. If you find anything about the new look jarring, play with the options in BusyCal > Preferences > Appearance, and don’t forget to check out the numerous commands in the View menu. 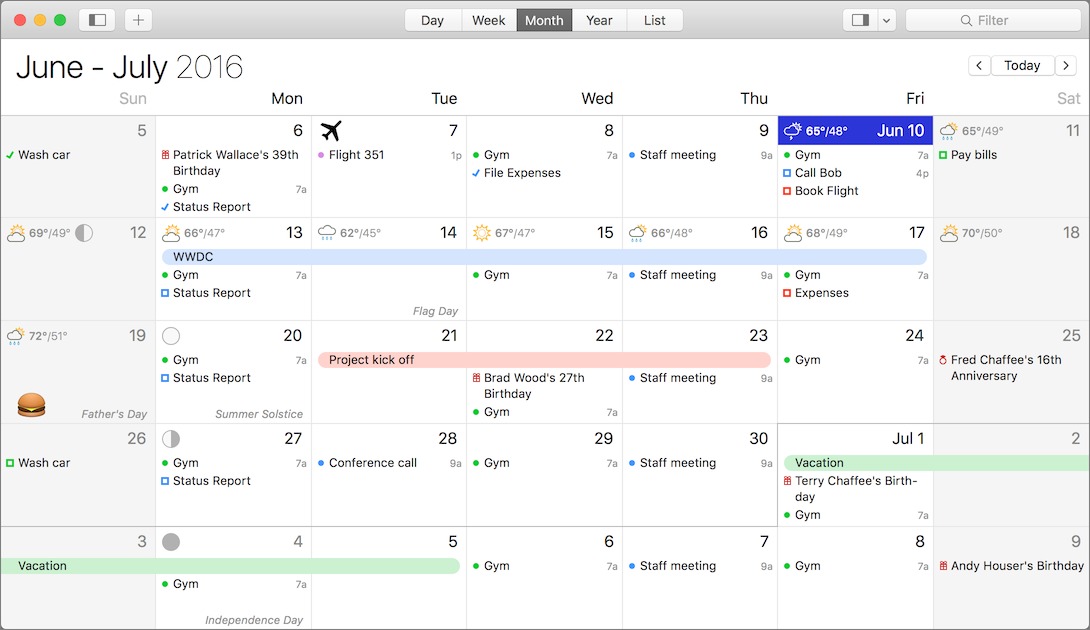 Sadly, it has become a bit harder to enter event times. In BusyCal 2, you could type “830” for 8:30 AM. That no longer works, because BusyCal 3 separates the hour and month fields in the Info panel, forcing you to type a colon, period, or tab to move from hours to minutes. Plus, you could type “1430” for 2:30 PM, but the hour field no longer accepts numbers beyond 12. (At least you can still type “10p” for 10 PM.) BusyMac tells me they’re looking at bringing BusyCal 2’s behavior back in an update.

BusyCal’s menu bar app has also received a redesign, adding a mini-month view that gives an impression of how busy you’ll be based on the density of events. It now has date-based navigation and shows the upcoming weather. On the downside, the menu bar app’s window previously had a white-on-black look that stood out well against light-colored windows; now it’s a black-on-white look that I find harder to distinguish from the background of white document windows. 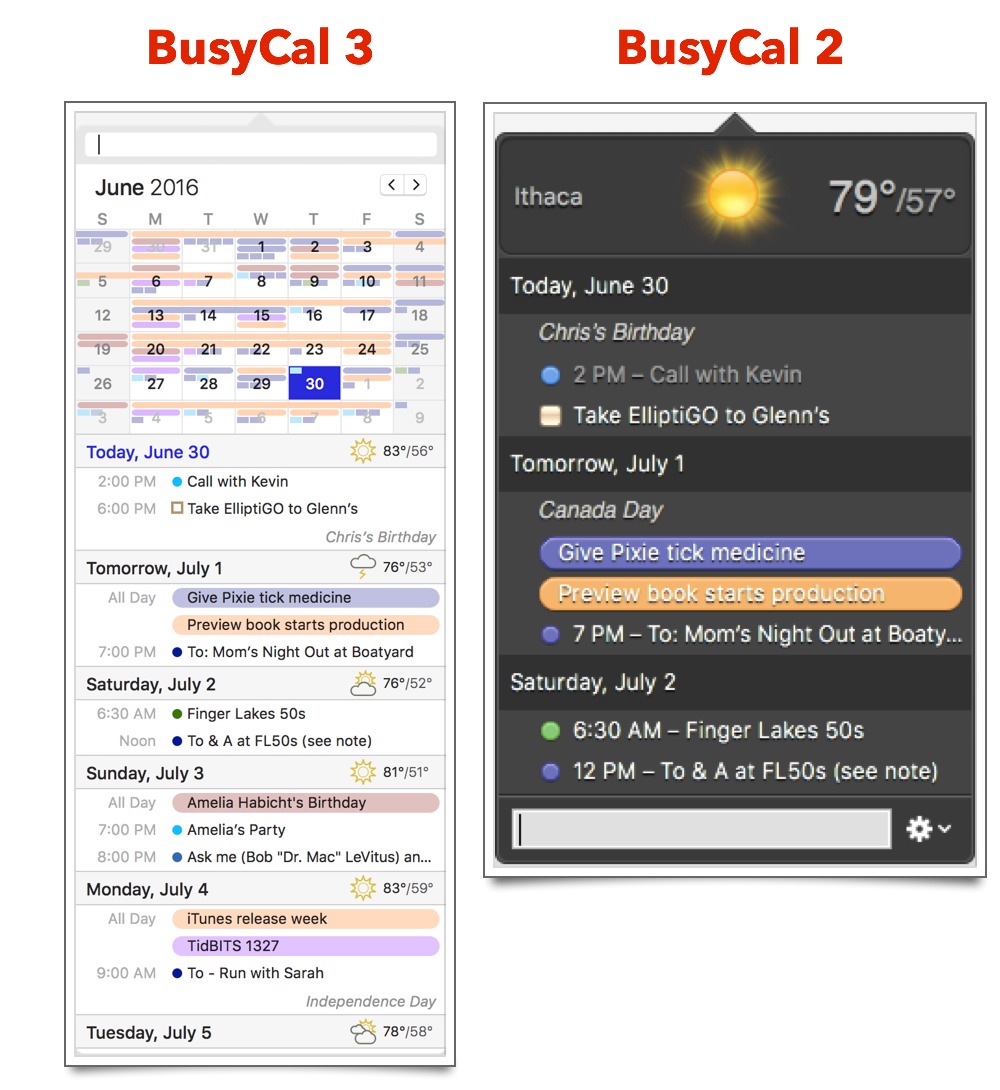 Another notable interface change is that BusyCal used to have a pair of arrow buttons on each side of the Day/Week/Month/Year/List button group at the top. Clicking an inside arrow button moved a small increment (a week, when you were in Month view) and clicking an outside arrow button moved an entire week, month, or year, depending on the view. BusyCal 3 has a Today button on the right side, with one set of arrows on either side. Those arrows act like BusyCal 2’s outside buttons; Option-click them to make
them work like the inside buttons and move in smaller increments. Or just use the Command-Left arrow (View > Previous) and Command-Right arrow (View > Next) keyboard shortcuts; again, include the Option key for incremental jumps (the 3.0.2 update added those commands back to the View menu as well). For those using a trackpad, BusyCal 3 now offers smooth date scrolling, and people with a Magic Mouse or scroll-wheel enabled mouse can use them to scroll as well.

On the functional side, BusyCal 3 now supports a feature from Calendar: optional calculation of travel time when you search for and enter a location for an event. BusyCal goes beyond what Calendar on the Mac can do in that its travel time calculation updates based on traffic conditions, so the Time To Leave alarm adjusts itself automatically.

Another new feature that may be appreciated by even more people is better support for timed to-dos. Previously, BusyCal let you manage to-dos within the app, rather than forcing you out to Apple’s Reminders app, but it couldn’t display them in chronological order with a time. Now it can, and you can even mark a timed to-do as done by clicking the checkbox next to its name in Day, Week, Month, and List views. For many people, Apple’s separation of to-dos from calendar events is awkward, so BusyCal 3’s enhanced integration is welcome.

Amid all these enhancements to the Mac version, BusyMac’s biggest news is the BusyCal for iOS app, which requires a separate $4.99 purchase. It mimics the basic feature set and look of BusyCal on the Mac, with List, Day, Week, and Month views. On the iPad, that works well, since there’s enough real estate to see an entire day in Day and Week views, and the iPad’s Retina screen makes even small text in Month view readable.

On an iPhone, List view becomes much more important, since the Day and Week views feel cramped, even though they still manage to show an entire workday. Month view is also awkward, since there’s so little room for event text and what you can see is so small. The trick is that you can tap a day in Month view for a more readable expansion of its events. Perhaps BusyCal’s choices will grow on me, but I still prefer the iPhone approach of Fantastical, which shows a low-density month view with a scrolling list of events underneath. Apple’s iOS Calendar app looks a bit like Fantastical, but is less functional since you must tap a day to see its events in the scrolling list
underneath. 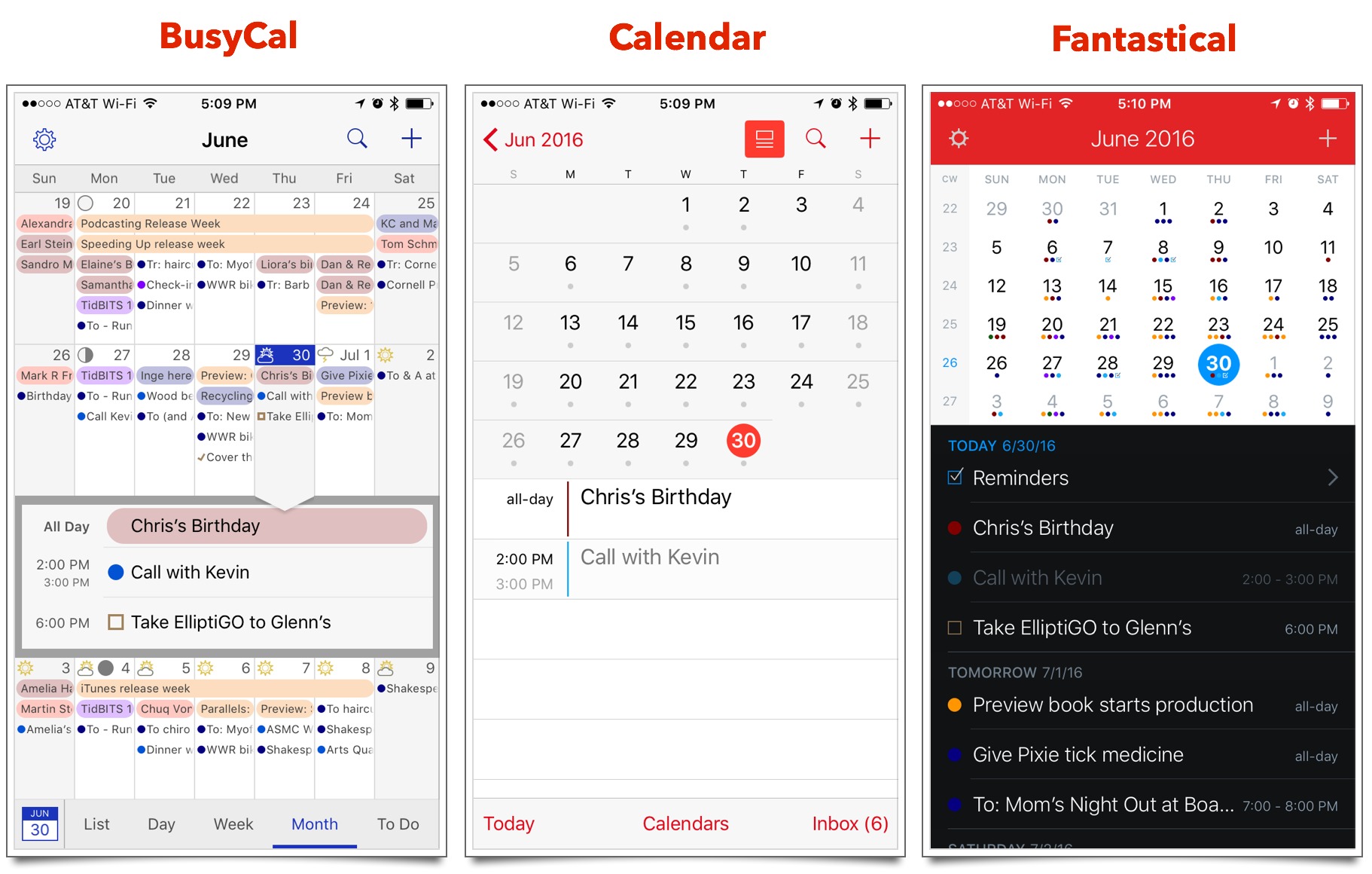 One place that BusyCal for iOS can’t match the Mac version is with Time To Leave alarms. Since BusyCal on the Mac relies on a background task to track changing traffic conditions, and iOS doesn’t allow such tasks, BusyCal lacks Time To Leave alarms on the iPhone. Ironically, Apple’s iOS Calendar app does support Time To Leave alarms, so perhaps just use it for alerts when out and about.

In the end, BusyCal 3 is more refined and more capable, while maintaining the advantages it has offered users for years. It’s not a huge update from the user perspective, but that means you won’t waste time learning new ways of working.

Those accustomed to getting every update for free in Apple’s App Stores may balk at the $29.99 upgrade price, but after nearly four years of free updates, it feels fair, and BusyMac has already released free 3.0.1 and 3.0.2 updates to fix bugs. New copies remain priced at $49.99, and as noted previously, the iOS version is $4.99. BusyCal 3 on the Mac requires OS X 10.11 El Capitan or later; BusyCal 3 for iOS needs iOS 9.3 or later and works on both the iPad and iPhone.