For cord cutters seeking to ditch ever-costlier cable and satellite TV, Sling TV is a compelling alternative, which I first wrote about in “FunBITS: Sling TV Is Made for Cord Cutters” (20 February 2015). It’s a cable-style service, with enticing and affordable packages of leading networks, but delivered online, with no need to set up a special box.

I have at times been tempted to jettison my Comcast TV service largely on the strength of Sling TV’s offerings. I’ve hesitated for a number of reasons, not least of which is that I could not access Sling TV on an Apple TV, my preferred video-streaming box.

Now that barrier has been removed. Sling TV has finally released an app for the fourth-generation Apple TV to complement its iOS and Mac apps. Sling is also offering a 32 GB Apple TV for $89, compared to the usual $149 price tag, for those who prepay three months of Sling TV.

Sling TV’s new Apple TV interface is pretty good. I don’t think it quite matches up to the Comcast X1 interface, another reason I’ve hesitated to cut the cord, but Sling has made great strides in usability since I last reviewed it.

Sling Content — Sling also has significantly expanded its content offerings. It once had only 20 or so channels, and that number is now up to about 100.

The company largely divides this lineup between two bundles, the $25-per-month Sling Blue, and the $20-per-month Sling Orange. The two have a good deal of overlap, but also differences.

Blue is a “multi-stream” service – meaning you can watch on up to three devices at once – with 42 channels, including new ones like USA, Bravo, and Syfy. It also includes local NBC stations in some markets, with more markets to come eventually.

Orange is a single-stream service with 29 channels, including new addition BBC America. Sling also offers an option to combine Blue and Orange (Sling Gray?) for a single $40-per-month fee.

If that’s not enough, you can add themed bundles, each $5, that focus on sports, children’s shows, comedy, world news (including recent addition BBC World Service), and more. HBO and Cinemax each cost an additional $15 and $10, respectively.

Sling also emphasizes Spanish-language programming, and the company has just augmented its longstanding “Best of Spanish TV” bundle with a “Caribe” bundle focused on Cuba and Puerto Rico, along with a “Colombia Extra” bundle. Such add-ons also cost $5 apiece, but Spanish speakers who want only this content, and nothing en inglés can also purchase them for $10 entirely on their own.

Interface for the Live and the Canned — Sling’s vast program options are a blend of live and on-demand content, and various networks have made different decisions as to what ratio of live and canned shows they make available.

Accordingly, Sling TV’s Apple TV interface attempts to cluster its content into corresponding sections. It doesn’t do this perfectly, but making sense of it all isn’t hard. To get started, you access the main menu by swiping downward from the top of the TV screen.

One menu option, dubbed Guide, is the busiest and a bit tricky to navigate by way of the Apple TV’s touch-based Siri Remote. All available channels appear in a strip near the top. That’s a lot of sideways thumb scrolling to find the channel you want, but you can refine selections by criteria – like sports, news, or family – via a menu underneath the channel strip. 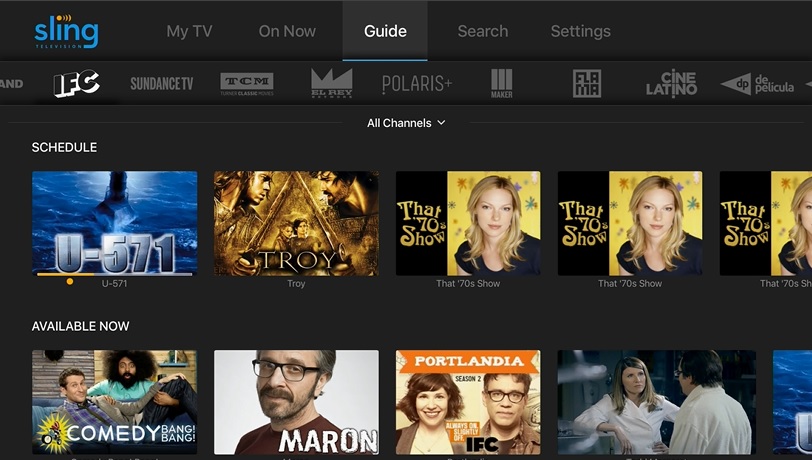 Once you select a channel, a host of options appear below. These vary by channel. In some cases, you can select live content and see a schedule of upcoming live airings. In other cases – such as HBO and Cinemax – there’s a wealth of on-demand content that you can watch at any time. It includes movies and TV shows like HBO’s “Silicon Valley” and “Game of Thrones,” for those who like Netflix-style binge watching. 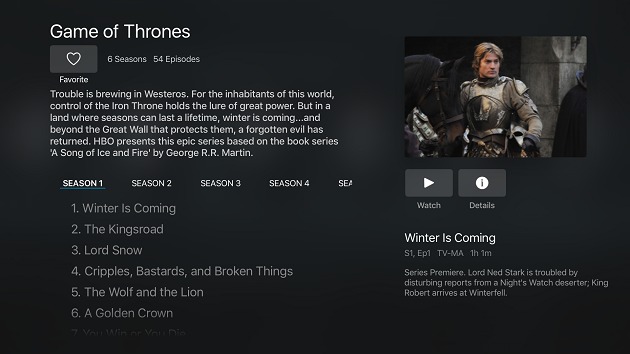 But, again, Sling organizes its content into horizontal strips that require endless sideways scrolling. It is torture, for instance, to move rightward alphabetically through dozens of films available from HBO alone.

Elsewhere in the Sling TV interface, you can pick the My TV option to see your partially viewed programs and content you’ve favorited for later viewing. Faved offerings include most-watched shows, on-demand movies, and entire channels for a customized and convenient personal menu that bypasses that awkward main channel strip. 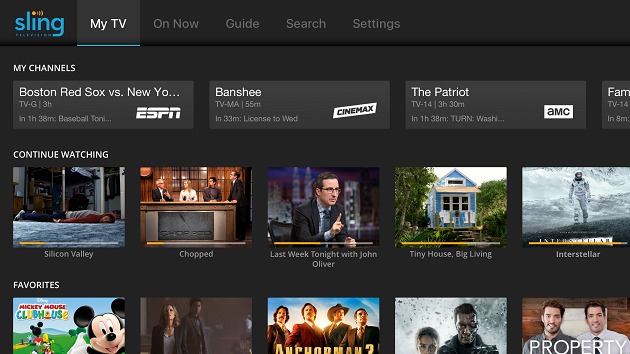 On Now shows programs that are currently playing live. 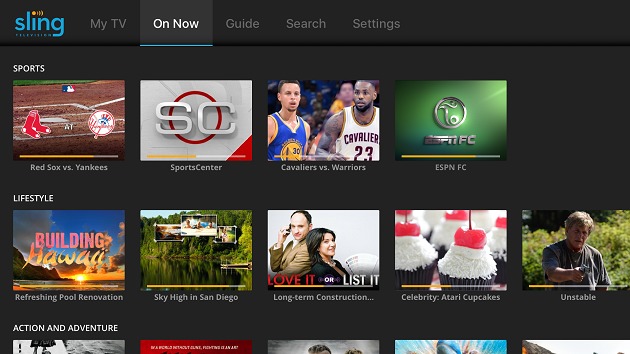 A redesigned Mini Guide lets you browse through available live content without interrupting what you are currently watching. It takes up less space than the previous Mini Guide, according to Sling. To access the Mini Guide on the Apple TV, swipe upward from the bottom of the screen. 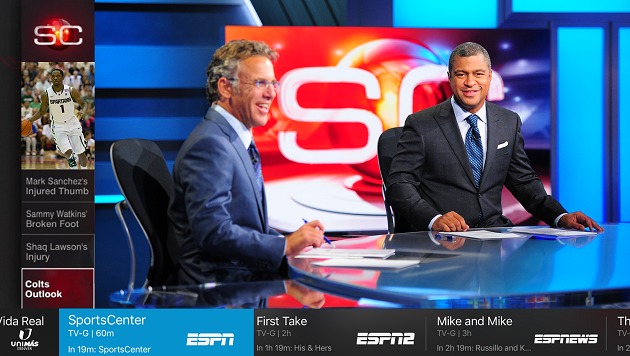 Sling TV has a search engine, which you can harness either via an on-screen alphabet interface or by using voice commands spoken to the Siri Remote. The app also provides simple parental controls that let parents prevent access to particular program ratings — along with unrated content.

Sling’s Apple TV interface is different from that on the iPad and the Mac, though not exponentially better in terms of interface design. The Apple TV app seems more reliable, though; I’ve struggled to pull up content like HBO’s “Silicon Valley” on my iPad, but that has been far less of an issue on the Apple TV. However, the Mac version has always performed reliably for me. 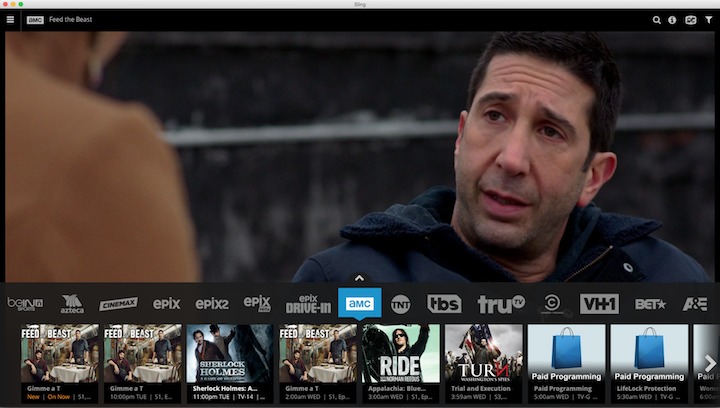 Still, Sling said the redesigned interface debuting on the Apple TV will eventually become its standard look and will migrate to other platforms in coming months. As I was finishing this article, it had already debuted on the Roku.

SlingTV provides apps for a variety of other platforms – like Google Chromecast and Amazon Fire TV streaming devices. This broad platform compatibility makes Sling TV an enticing option for those who are tempted to cut the cord amid skyrocketing cable and satellite bills.