The Walmart-led MCX consortium and its Apple Pay competitor CurrentC may be dead in the water (see “CurrentC Out of Juice,” 17 May 2016), but the retail behemoth hasn’t abandoned the dream of running its own mobile payment system. Walmart Pay, in beta since December 2015, is now available throughout all 4600+ stores in the United States via the free Walmart app for the iPhone.

Unlike Apple Pay, which uses wireless NFC technology, Walmart Pay takes its cue from the CurrentC playbook, using QR codes that you scan at checkout with the iPhone’s camera. Surprisingly, this isn’t as clumsy as it sounds, and unlike CurrentC, which insisted on linking directly to your checking account, Walmart Pay connects with a credit card, debit card, or Walmart gift card.

Before I explain how to set up Walmart Pay, you might wonder why you’d want to use it. Here are a few reasons:

Setting Up Walmart Pay — Setting up Walmart Pay is straightforward, but you’ll want to do so before heading to the store.

Open the Walmart app, and tap the Walmart Pay square in the Shop tab. On the next screen, tap Set Up Walmart Pay. Then you’ll either need to log in to your Walmart.com account or create one. Here’s an impressive detail: the app integrates with 1Password, so 1Password users can tap an icon to autofill the Walmart login credentials. 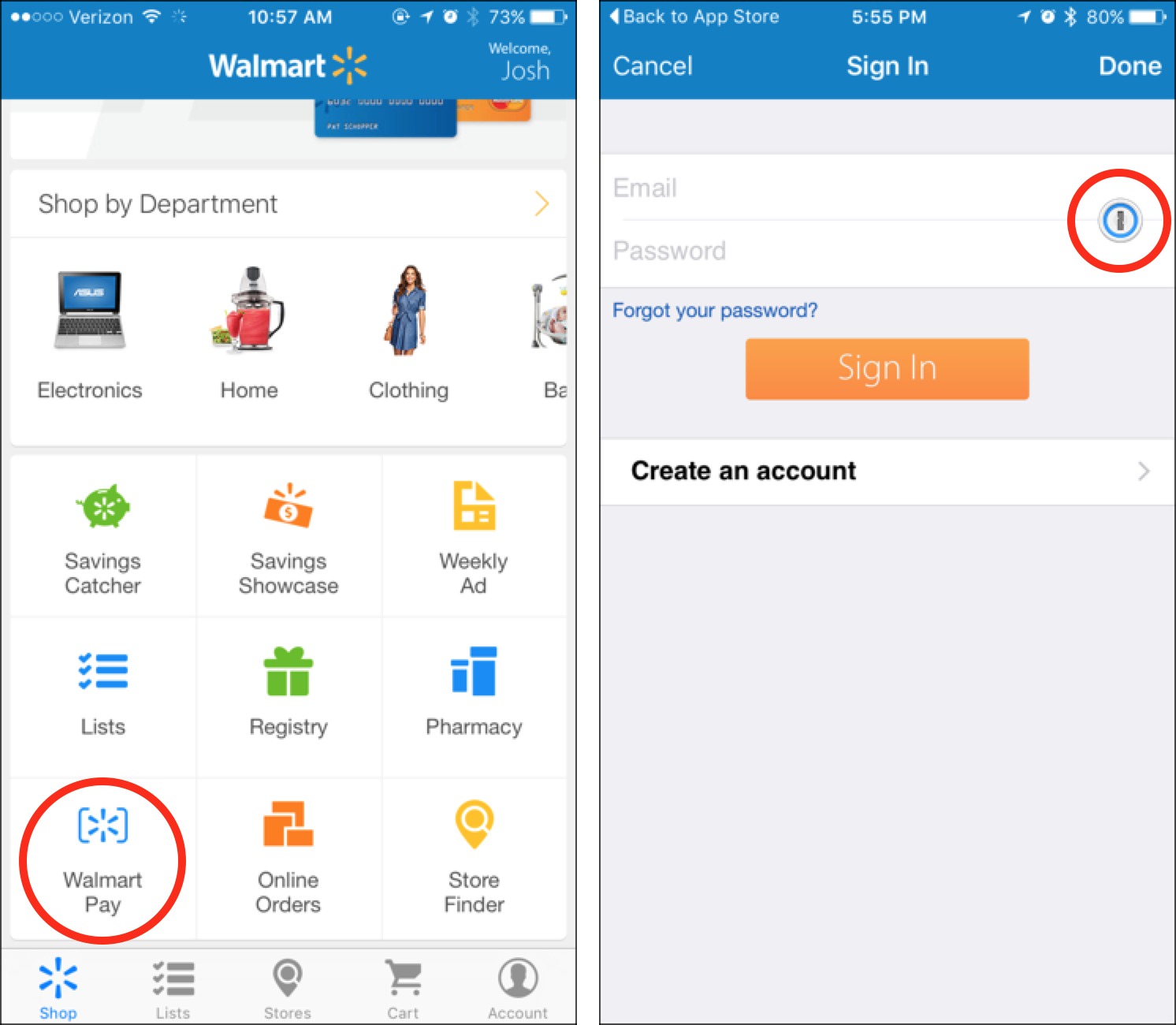 Next, you’ll need to add a payment method. If you already have a payment method linked to Walmart.com, you can select it and tap Use This Card & Continue. Otherwise, you’ll need to enter your information from a credit or debit card. After that, you also have the option of adding a Walmart gift card. Agree to the terms and conditions, re-enter your Walmart password, and then set up a PIN for Walmart Pay. After adding a PIN, you’re prompted to use Touch ID with Walmart Pay, which makes things a bit smoother.

Using Walmart Pay — Unlike Apple Pay or Apple’s Wallet app, Walmart Pay doesn’t notify you when you enter a Walmart store, so you’ll have to open the app manually. The app is location sensitive, though, so it will recognize the store, and at the top of the Shop tab, offer options for Walmart Pay, price checking, store search, and the weekly ad. 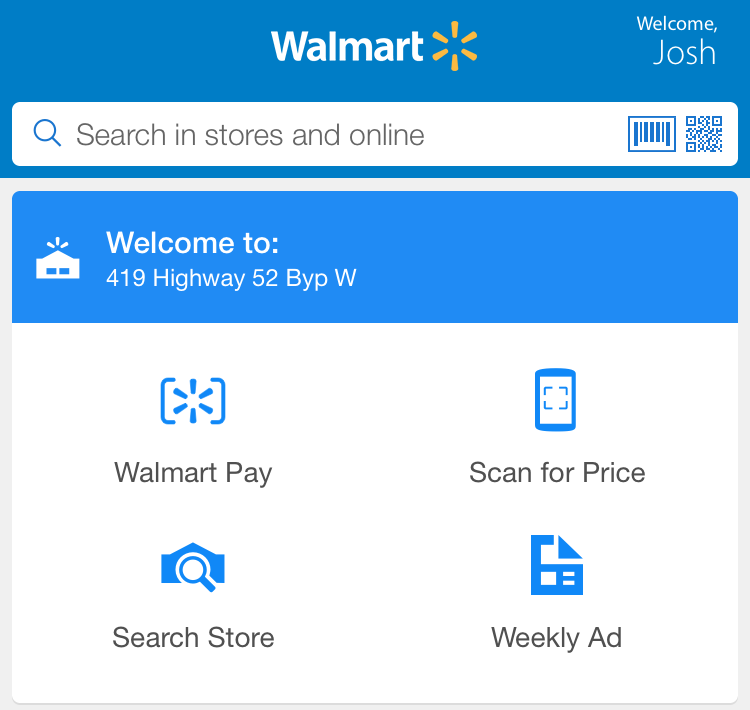 When you’re ready to check out, open the Walmart app and tap Walmart Pay. If your store is like mine, you’ll have more than enough time to do this while standing in line.

The actual Walmart Pay interface is a simple viewfinder. When you get to the register, the point-of-sale terminal displays a QR code. Center the QR code in the app’s viewfinder to link the two together and process your payment.

In theory, you can do this as soon as the clerk starts scanning your stuff. However, the QR code disappeared for a minute, and I had to press some buttons to get it back. Once I scanned the code, the process was pretty much seamless, if not quick. The transaction itself probably took at least as long as using a chip-based credit card, but it was a hands-off process.

Unlike Apple Pay, which seems to confuse every clerk I try it on, my Walmart Pay experience was relatively uneventful, though the cashier was baffled that a receipt didn’t print out. Instead, it’s sent to the Walmart app. Oddly, while you don’t receive a notification upon entering a store, you do receive one for your receipt. 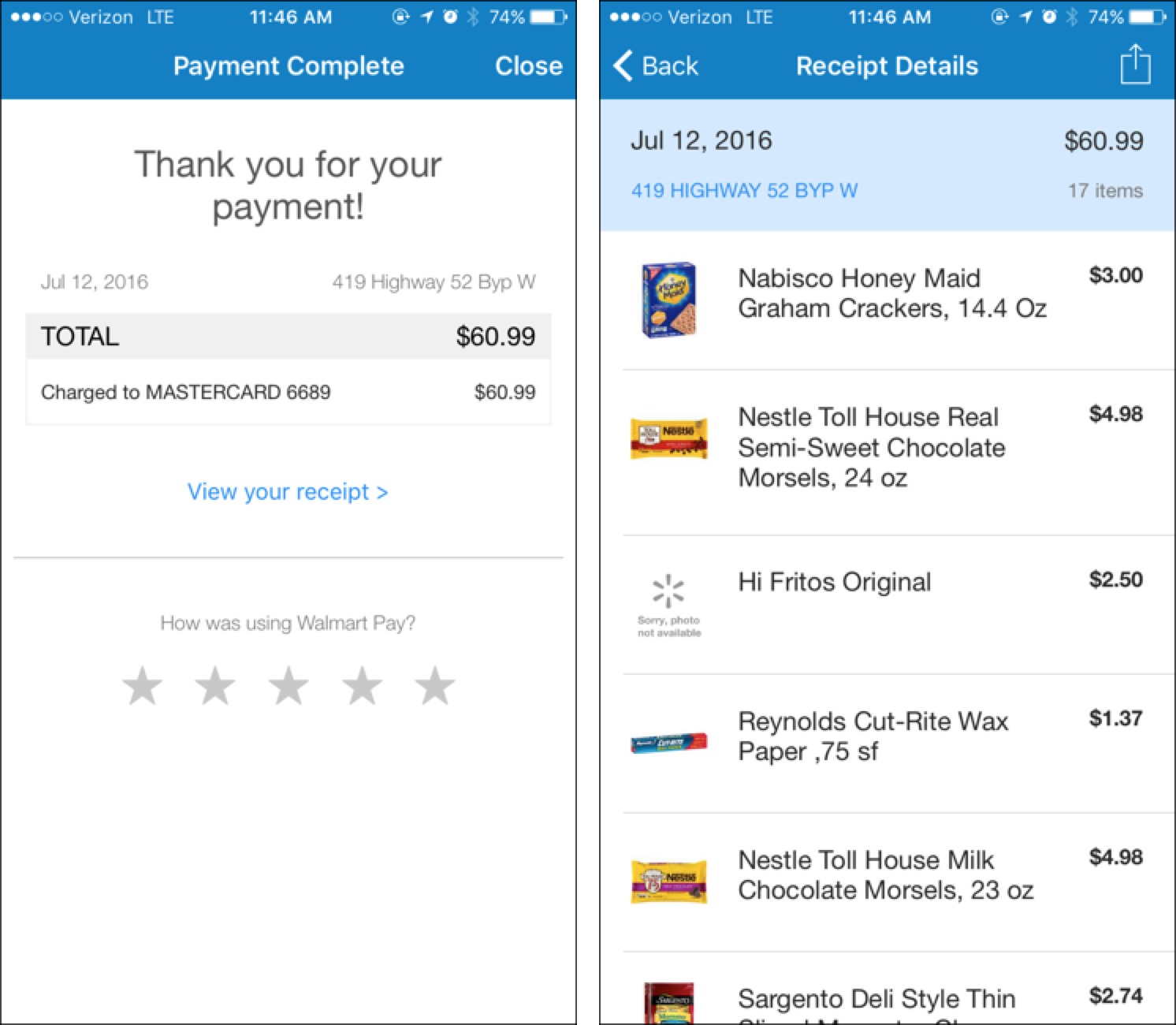 Of course, like any of the mobile payment systems on the market, there are snags. Frequent TidBITS contributor Julio Ojeda-Zapata reported several problems in his tests, including failed transactions, delayed transactions, and repeat charges for the same item.

Unfortunately, the problem with Walmart Pay is much the same as Apple Pay: it’s more trouble than just using cash or a card for not much benefit. Factor in the potential embarrassment of the system not working, and you’re left with something that isn’t much more than a novelty.

However, if you shop at Walmart regularly, it’s probably a good idea to set up Walmart Pay, just in case you leave your wallet in the car.

Comments About Walmart Pay Is Better Than You Might Expect