Earlier this year, Josh Centers and I wrote “The Power of Preview,” a series of TidBITS articles about Preview that proved extremely popular, so much so that readers asked us for a book version. “No problem,” we thought. However, while exploring features that had merited only brief mention in the articles and responding to queries from Tonya and ex-Macworld editor Scholle McFarland, we discovered that Preview was even more capable than we’d realized.

In the end, that handful of articles turned into the just-released 166-page “Take Control of Preview,” featuring largely rewritten text, expanded instructions, and much better illustrations. 14,000 words turned into 36,000 words; we bumped the number of screenshots from 62 to 107; and we added over 100 inline button graphics. It may not be obvious from the outside, but a professionally written, edited, and laid-out book requires vastly more effort than articles.

I think the original pieces were popular because Preview is an old-school Mac app, with clear menus, an extensive collection of consistent keyboard shortcuts, and a certain ineffable elegance. Unlike so many other bundled apps, there’s no iOS version to twist its interface toward touch-based interaction. Preview’s developers must somehow fly under the radar at Apple, since Preview looks and feels as though it has evolved slowly and carefully over more than a decade. It’s almost too understated, concealing its power so well that most people never realize that it’s more than a viewer for images and PDFs. I’d love to meet the Preview team someday.

If you’ve read our original series, you have a sense of how much Preview can do. If not, did you know that you can import photos directly from a camera into Preview? Or that Preview can create PDFs from your scanner? “Take Control of Preview” has step-by-step instructions, complete with expanded explanations of the scanning options and recommendations for the best results. Josh and I also teach you all about Preview’s surprisingly capable collection of image-editing tools. You’ll soon be editing imported photos by tweaking the exposure, color saturation, sharpness, and more. You can even mark up your images and PDFs with circles, arrows, and text captions, plus numerous other
shapes — try that in Photos! Your holiday cards, Facebook feed, and Web site will never be the same. I whipped up this silly author photo to showcase a few of the things Preview can do. 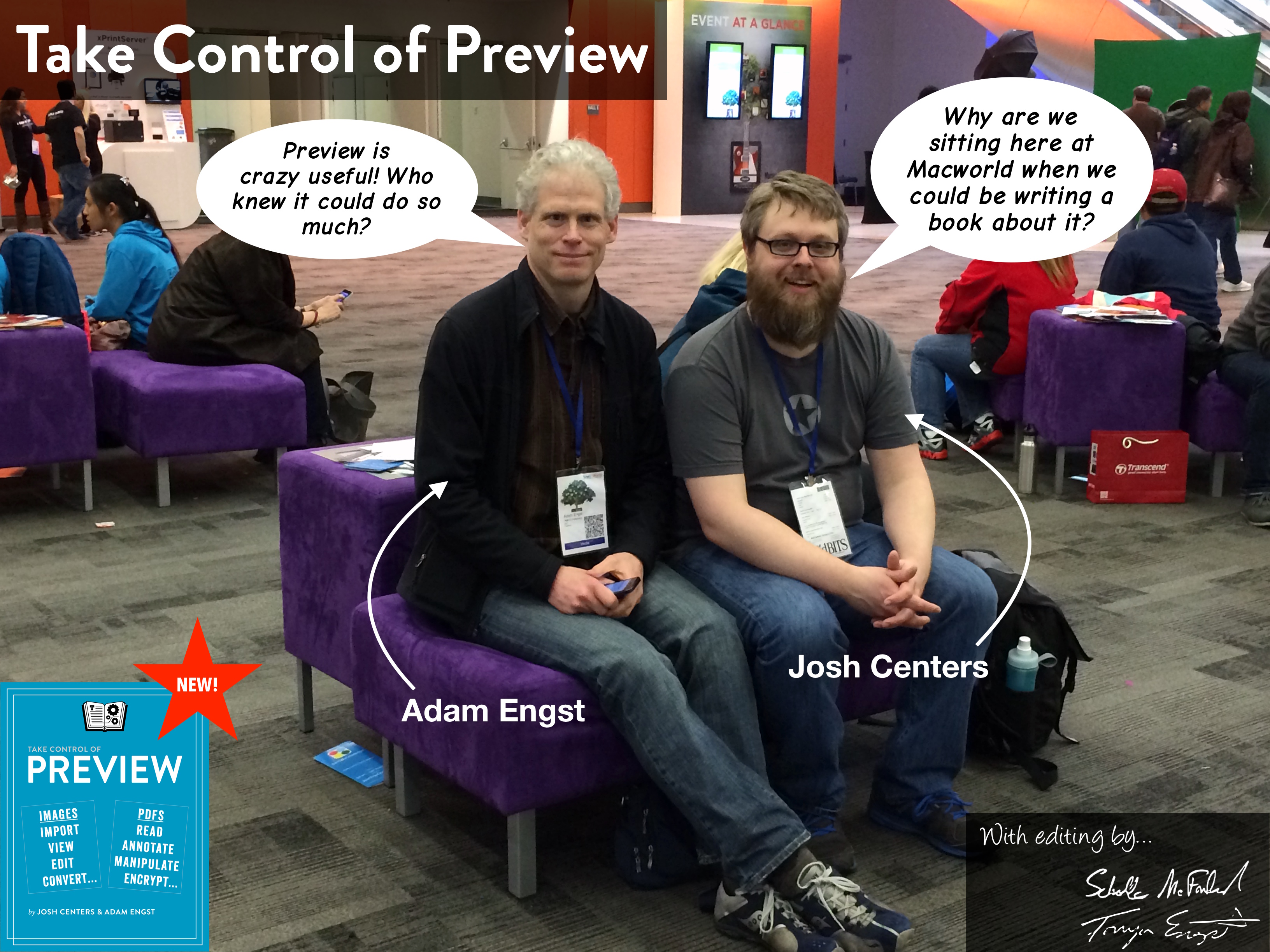 You know you can read PDFs in Preview — PDF remains the most popular format for Take Control books — but are you using the best view? For instance, have you tried a two-page, full-screen mode with the table of contents showing in the sidebar? We explain how to get that view, along with other ways to make reading PDFs as fluid as possible.

Since so many paper forms now come in PDF, “Take Control of Preview” also shows you how to fill out PDF-based forms, complete with quick insertion of your signature. Those who read digital textbooks or collaborate on documents will learn to annotate PDFs with highlights, notes, and bookmarks, and to navigate through PDFs using those annotations. You’ll even discover how to create PDFs from a scanner, the clipboard, and the Print dialog (which is ideal for creating PDF-based image catalogs!). Finally, if you want to protect your PDFs from prying eyes or keep people from copying your text, we explain the two types of PDF passwords and what each is good for.

Josh and I packed “Take Control of Preview” with real-world examples from our lives and punched it up with oodles of new tips. For instance, did you know you can edit an image in Preview while simultaneously viewing any previous version of that image?

Like all Take Control books, we’ll be keeping it up to date as necessary. I even learned a few things while working on our author photo — although you can’t control the layer order of added shapes, you can duplicate an object (and delete the original) in order to be able to place it on top of other objects. That tip and others will be working their way into future versions of the book.

Finally, I’d just like to say that if you want to see more in-depth explorations of the Mac and its bundled apps, please buy a copy. We sincerely appreciate all the kind comments we’ve gotten on the original articles, but if we’re going to devote the months of effort necessary to produce a comprehensive book that goes way beyond Apple’s online help, it has to make business sense. Thanks for the support!

Comments About “Take Control of Preview” Reveals Even More Features