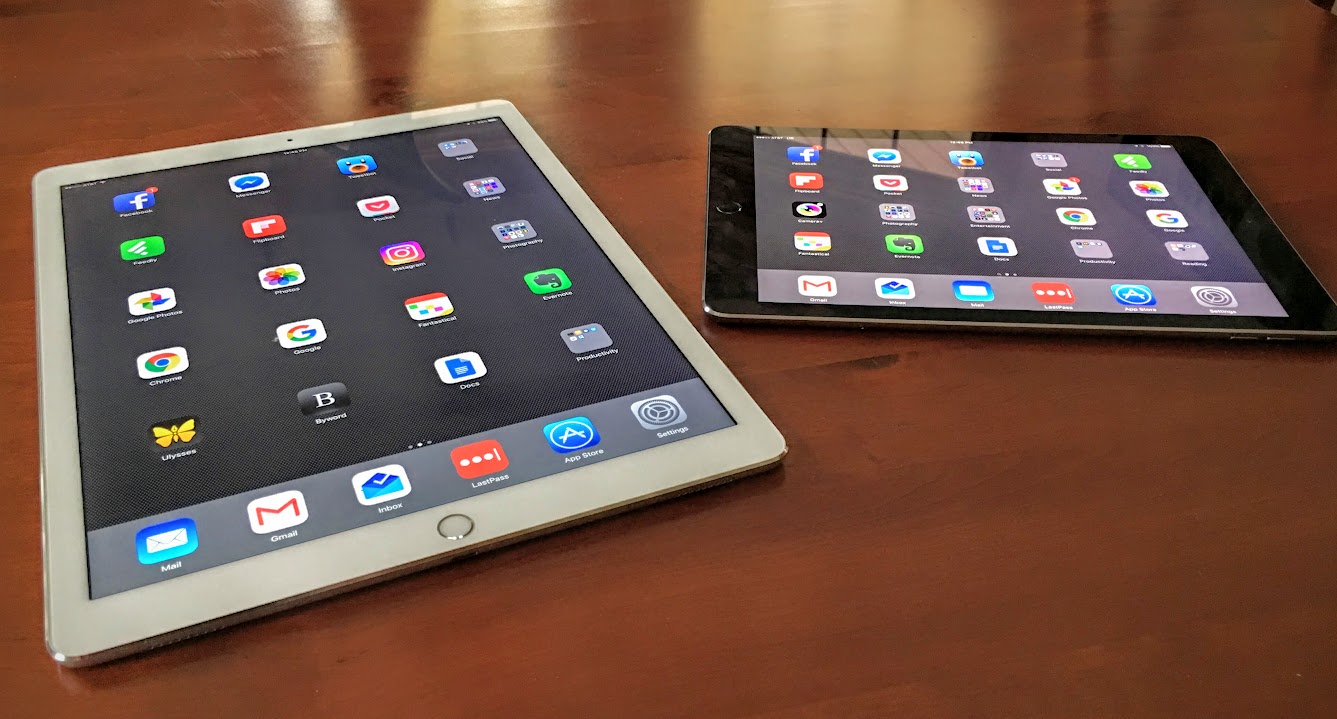 Though the iPad Pros resemble previous iPad models, they’re tricked out with a magnetic Smart Connector for use with a Smart Keyboard cover, and they also work with the new Apple Pencil stylus.

Apple’s emphasis with the iPad Pro is on productivity, an angle I’ve embraced with gusto. Though I have long been fond of writing and doing other work on an iPad, the iPad Pro has taken over for an Apple laptop as my preferred workhorse while on the go.

The question is, which iPad Pro? There’s the rub.

I’ve made extensive use of both models in recent months and love them both for different reasons. While they seem nearly identical on the surface – apart from size and weight, of course – they are quite distinct in some ways.

Advantages of the 12.9-inch iPad Pro — The larger of the iPad Pro models, though older, is superior to the small one in several tangible ways.

The Intangibles — In many ways, purchasing an iPad is a highly personal decision. One potential buyer might find the larger iPad Pro too big and heavy, while it might be just right for another. For some, the version of the Smart Keyboard for the 9.7-inch iPad might feel intolerably cramped, but not for others.

I’ll focus here on my experiences while broadening my discussion to include others who might be considering a purchase.

Conclusion — Most people won’t have both iPad Pro models available to compare. I’m lucky to have both versions on loan from Apple, which has been a revealing experience.

I’ve found a role for each tablet. The larger iPad Pro is mostly for home use – on my front-porch workstation, for instance, when I want to get some serious work done while enjoying a bit of fresh air.

The smaller iPad Pro is my mobile model. It goes with me everywhere. I tuck it into a small messenger bag if I’m walking, chuck it into my pannier when biking, and have it with me in my car at all times.

If I had to choose? I’d get the 9.7-inch model because it does everything the bigger tablet can, though sometimes in a more cramped manner, and it has some cool new features.

You’ll make your own decision based on your particular set of needs and circumstances, but you can’t lose. Both models are great, though with key differences that you should mull over carefully before making your purchase.