Apple has released the latest report detailing its continuing efforts to promote inclusion and diversity within the company. Available on a colorful, anecdote-heavy Web page that begins with a large headline reading, “The most innovative company must also be the most diverse,” the report presents interactive charts and statistics that describe the ethnic, racial, and gender distribution of its employees over the last three years.

Once you scroll past the anecdotage from eight representative employees and inspirational headlines, you get to the facts and figures. These tend to break out into two kinds of data: global gender diversity and percentages of U.S. underrepresented minorities (or “URMs”), the latter defined as “groups whose representation in tech has been historically low — Black, Hispanic, Native American, Native Hawaiian, and Other Pacific Islander.”

For a global company like Apple, such a breakdown makes a certain amount of sense: although every country in which Apple operates has roughly equal numbers of males and females, the ethnic and racial composition of different locales’ populations can vary widely. Choosing to present figures for URMs only in the United States sidesteps having to deal with which groups are underrepresented in places like Ireland or Singapore. What’s missing in the breakdown as presented, of course, is the gender diversity within individual URM groups, which would provide a more complete picture.

One of the quickest ways to change the gender and minority representation within a company is through newly hired employees, and that is the category that Apple presents first. Apple reports that 37 percent of new hires are female compared to 32 percent of current employees. Similarly, 27 percent of new recruits belong to URM groups compared to 22 percent of current employees. What’s missing here is the percentage of Apple’s total employee count that new hires constitute: if that percentage is small, even large changes in the minority and gender makeup of new hires would have a minimal effect on the company’s overall diversity. 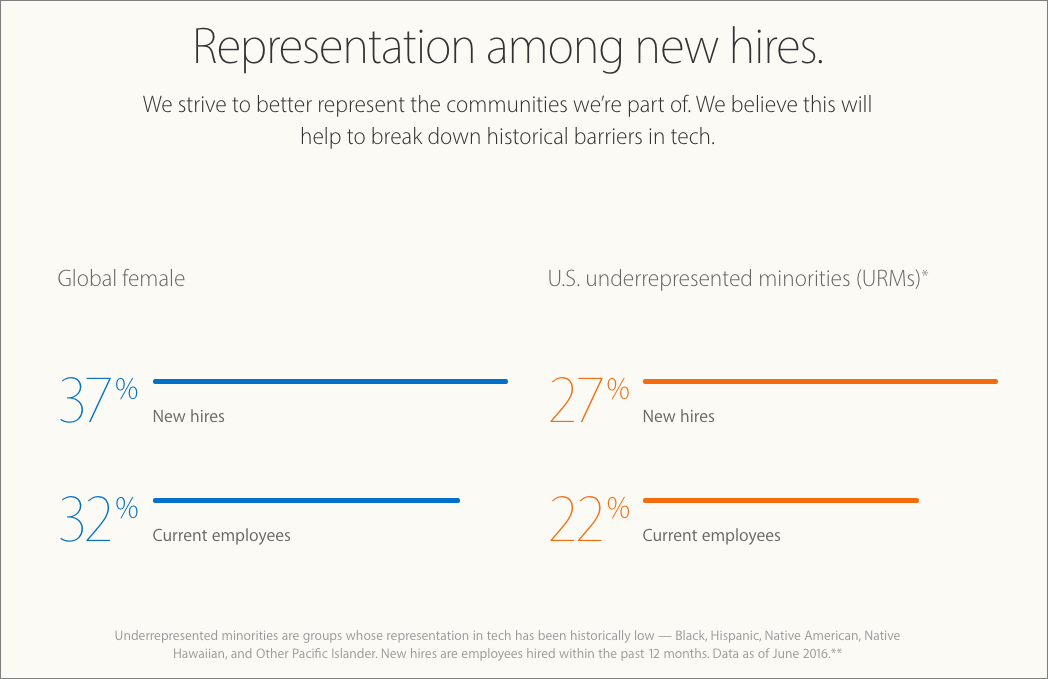 Confusingly, having said in the first set of charts that 27 percent of new hires this year are URMs, the next section of the page proclaims that 54 percent of the new hires in the United States are minorities. Apple arrives at that number by adding in employees who are Asian or multiracial; they may be minorities, but they’re not underrepresented in the tech world. 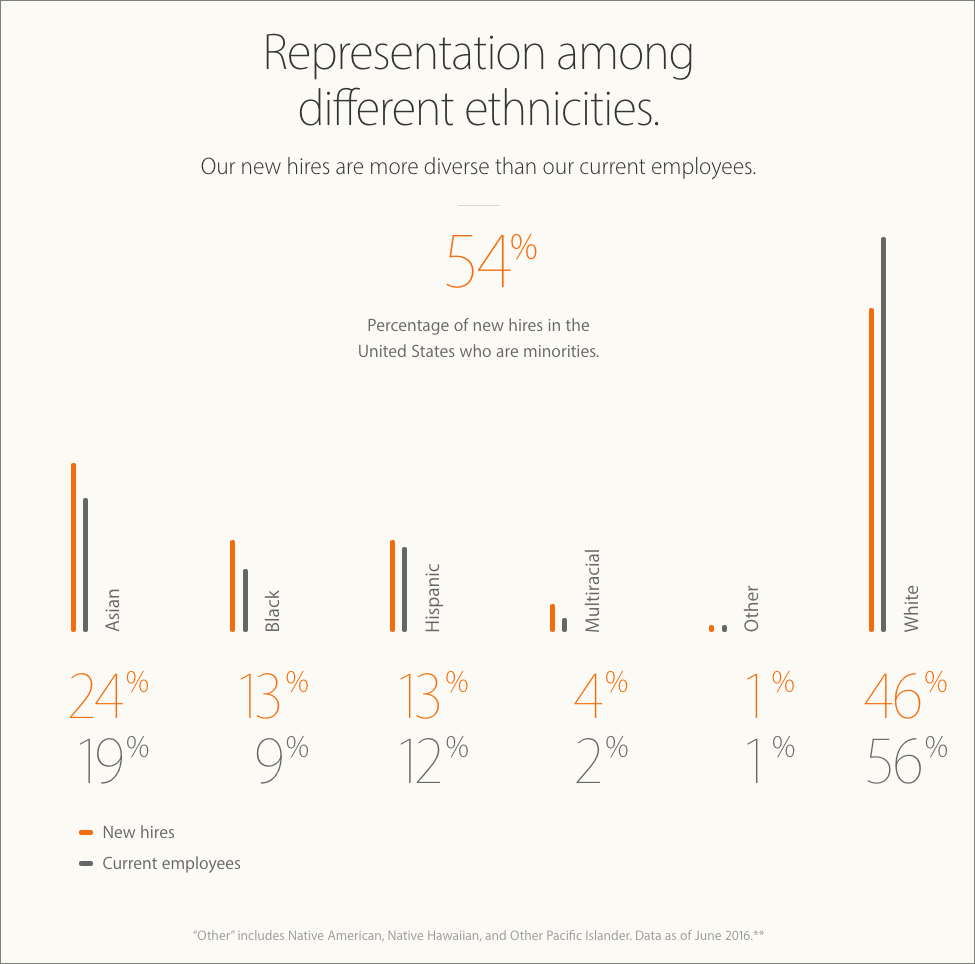 As for pay differences between groups, Apple simply says that it has “achieved pay equity in the United States for similar roles and performance,” and that it is examining salaries, bonuses, and stock grants among non-US employees and aims to address any pay inequities it finds.

The final set of interactive charts shows gender and minority representation over the last three years, broken down into job categories. Here you can see that Apple is slightly less masculine globally than it was three years ago, with men constituting 68 percent of the employee base today versus 70 percent in 2014. That small shift, however, is absent in the leadership ranks, which remained at 72 percent male from 2014 through 2016. 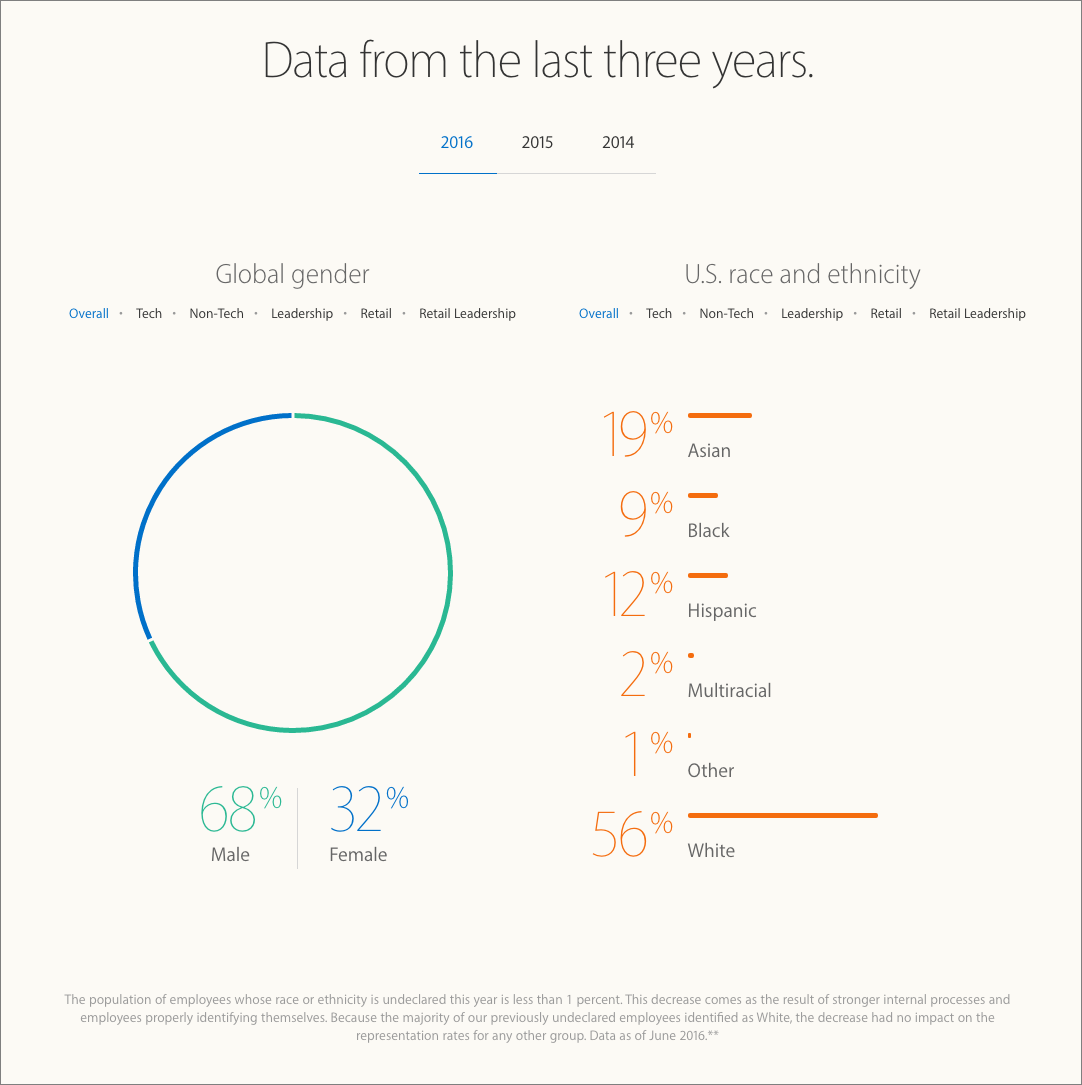 In the United States, Apple is also slightly whiter in 2016 than it was in 2014: 56 percent white this year versus 55 percent in 2014 (and the company was only 54 percent white in 2015). On the other hand, blacks make up slightly more (8 percent) of the workers in technology positions than in 2014 (6 percent). All of the figures presented, however, are not quite comparable, in that 8 percent of employees in 2014 declined to state their ethnicity; that figure is zero for 2016.

Diversity, of course, isn’t just a matter of numbers but of culture. Apple lists eleven different internal groups that provide support for minorities, such as the Apple Muslim Association and [email protected] Moreover, the diversity page links to the Creating Opportunities page, which describes the various programs and initiatives that foster technology training among underrepresented groups for which Apple provides support, such as President Obama’s ConnectED initiative and the highly regarded App Camp for Girls.

On the whole, the latest diversity report is a typical Apple product: attractive, inspiring, and with most of the operational details hidden from view. Still, market-driven as the page appears, it does seem to reflect the Apple leadership’s mindset: that diversity is important to the company and is a quality worthy of continued support.

Comments About Apple Reports on its 2016 Diversity Efforts