As a writer with a tech bent, I’ve long been obsessed with writing apps – which I define as software I would use to compose articles like this one, along with blog posts and other kinds of prose.

The sheer number and variety of writing apps for Apple users can be vertigo-inducing, and I’ve tried my share. These apps range from the complex (such as Microsoft Word and Literature & Latte’s Scrivener) to the minimalist (like Byword and iA Writer).

Some writing apps stick to a middle ground. Apple’s Pages and Google Docs are feature-rich, each in their own way, but not to the point of absurdity like the insanely complicated Word.

Then there’s Ulysses, a Mac and iOS writing app that also attempts to strike a balance between simplicity and raw power – but in a way that is a departure from the familiar.

The apps’ publisher, a German outfit called the Soulmen, updated the Mac version in March 2016 – and snagged an Apple Design Award for it during WWDC 2016. The iPad version received an update that added iPhone support. Both Ulysses apps last week underwent another, smaller upgrade to add a handful of additional features – such as blog publishing.

I’ll focus on the Mac version here but dip into aspects of the iOS app that are important.

What It Is… and Is Not — Before I go further, I should make crystal-clear what Ulysses is – and isn’t – in general terms.

Ulysses is not like Word or Pages, which blend word processing with desktop publishing to fashion complex documents that incorporate intricate layouts with all manner of imagery and typography. It’s also unlike Scrivener, which bristles with organizing features for long-form writers, such as novelists who wrestle with plot outlines, character lists, and story arcs. And it doesn’t have collaborative editing capabilities like Google Docs.

At its core, Ulysses focuses on plain text. In this regard, it’s more like those minimal apps I mentioned. They typically support Markdown, a plain-text markup language used for composing and converting to HTML and other formats. Ulysses also is Markdown-centric, with users applying the syntax by default. But Ulysses is more ambitious than other Markdown editors in its organizational capabilities, and it adds features (like image embedding) that simpler writing apps leave out.

Ulysses users don’t have to be obsessed with Markdown. I’ve yet to fathom why the language is so popular among a certain species of Apple user, but I appreciate Ulysses all the same (I wrote this article in it). I like minimalism, but at the same time, I’m a control freak about keeping things organized meticulously, and Ulysses scratches both itches nicely.

Interface Overview — As a sometime user of Byword, a popular Markdown app that is aggressively minimalist, I found Ulysses a bit daunting at first. However, its more complex interface design is easy to grasp after a while. 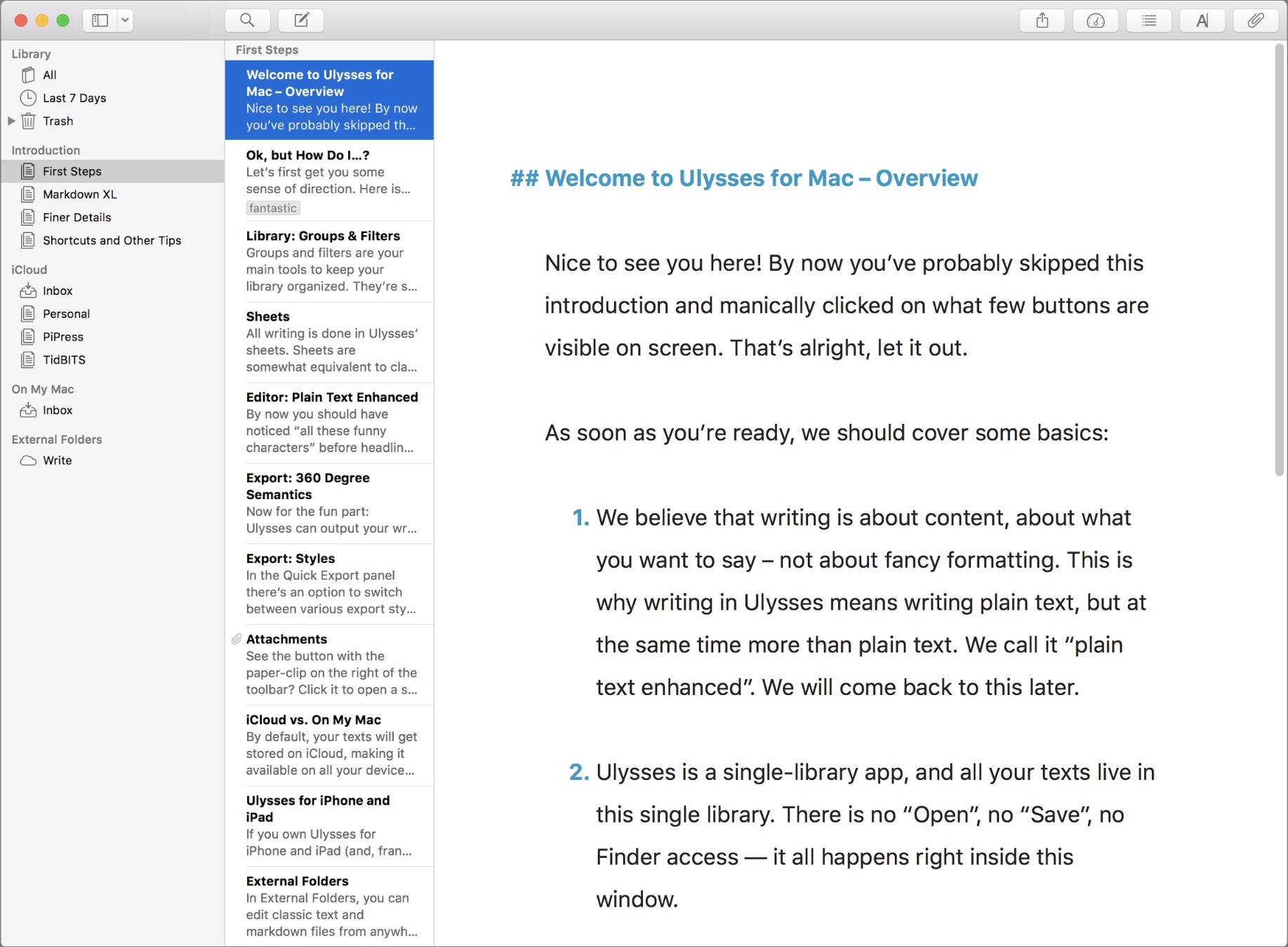 It takes a three-column approach with a composing area on the right, an organizing sidebar or “library” on the left, and a document or “sheet” listing in the middle. Sheets are organized into groups, which appear in the library. The sheet for this story is in a TidBITS group, for instance. Groups include subgroup support with a familiar nesting behavior.

Although groups map conceptually to folders and sheets to files, Ulysses departs from other plain-text editors in that you cannot readily locate its content outside the app. It’s a single-library app, and all your content lives inside, much like Apple’s Notes and Photos apps.

There is an exception to this rule: Ulysses also supports “external folders,” meaning you can point the app at a Mac folder to access and modify text files therein. It’s an imperfect option, however, because some Ulysses features (such as image embedding) don’t work in externally loaded files.

Time to Write — Composing in Ulysses is straightforward. Again, you don’t need to be a Markdown ninja because formatting is mostly automated. Highlight a word, press Command-B, and you will boldface that text — but it shows up as Markdown with two asterisks on either side. To further guide you, formatting commands also appear in a Markup pop-up menu and in a popover window that you park off to one side of your screen for reference. 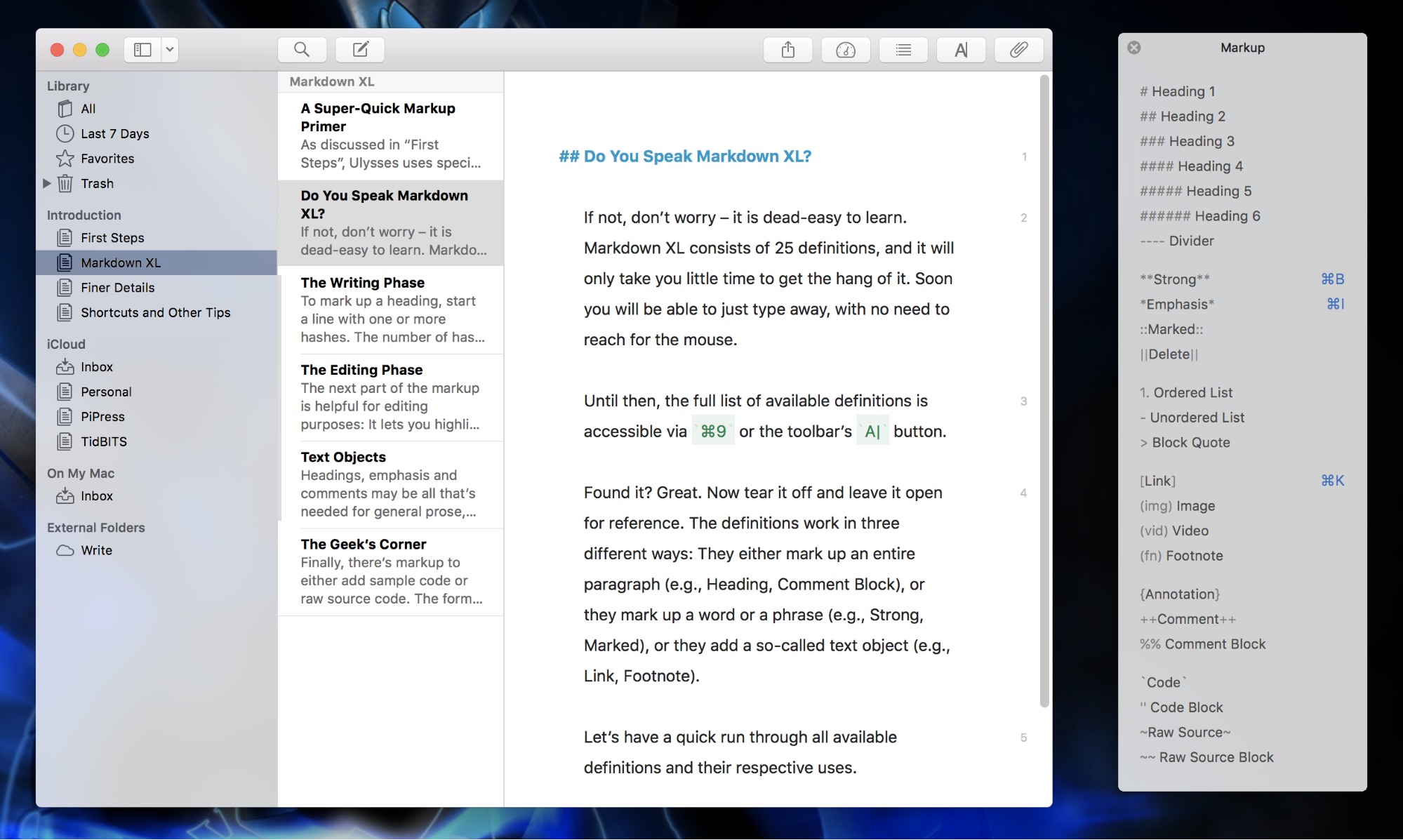 If, like me, you’re not a devotee of Markdown, you’ll have to make your peace with how weird Markdown appears (there is no rich-text composing option, as in Byword). Ulysses masks some of this complexity with colored shapes or “text objects” denoting Web addresses, image embeds, footnotes, and annotations in place of markup syntax. 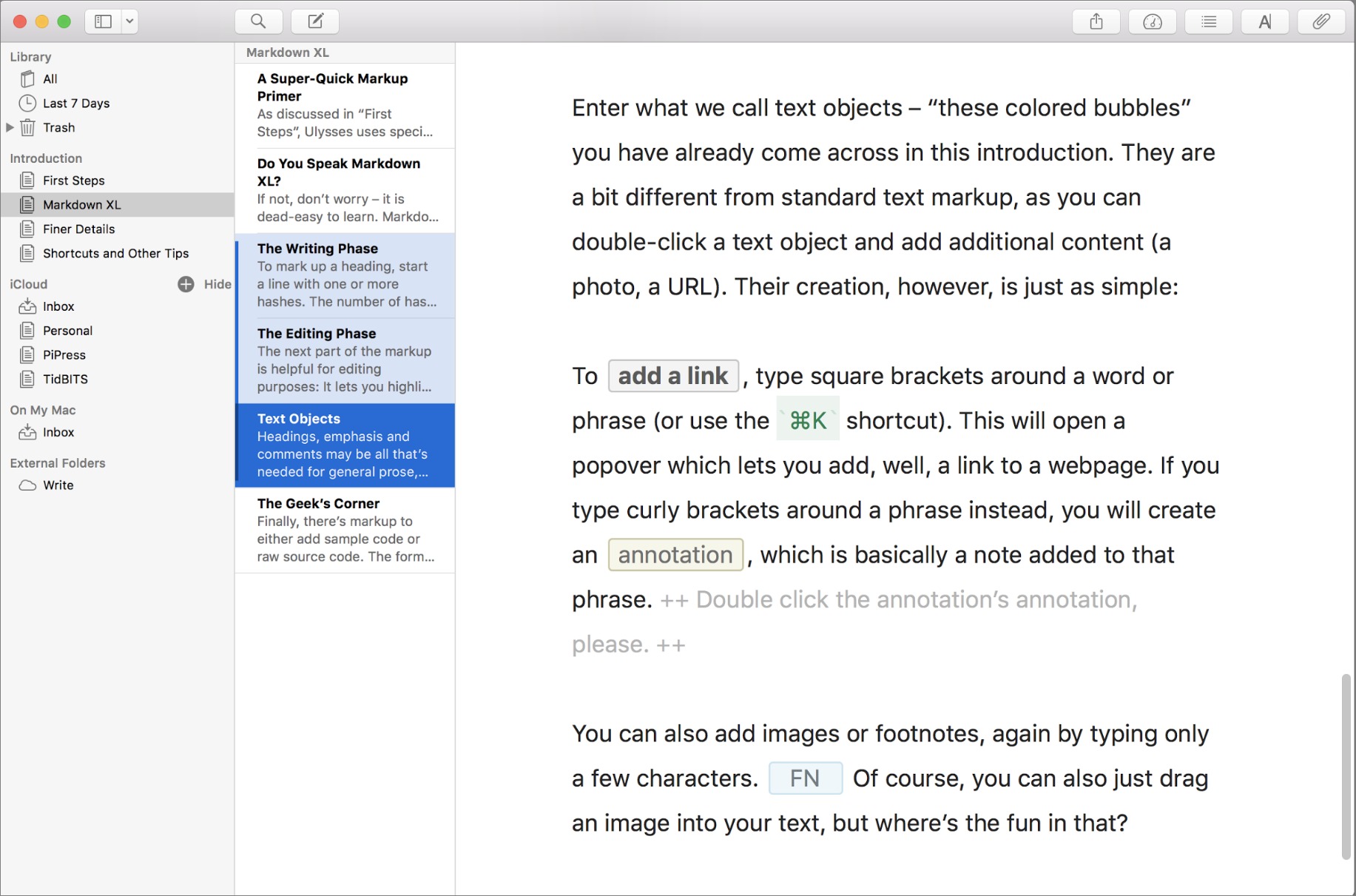 Ulysses actually uses an in-house Markdown variant it calls Markdown XL, with departures from the vanilla Markdown originally created by John Gruber of Daring Fireball fame. The differences aren’t hard to grasp, but you can switch to regular Markdown if you desire.

Ulysses adds useful tricks, such as the aforementioned image embedding. Drag a picture into the document and it’s shown as an IMG tag, but double-click it and the image appears. This feature isn’t available with documents that reside in an external folder, as noted. 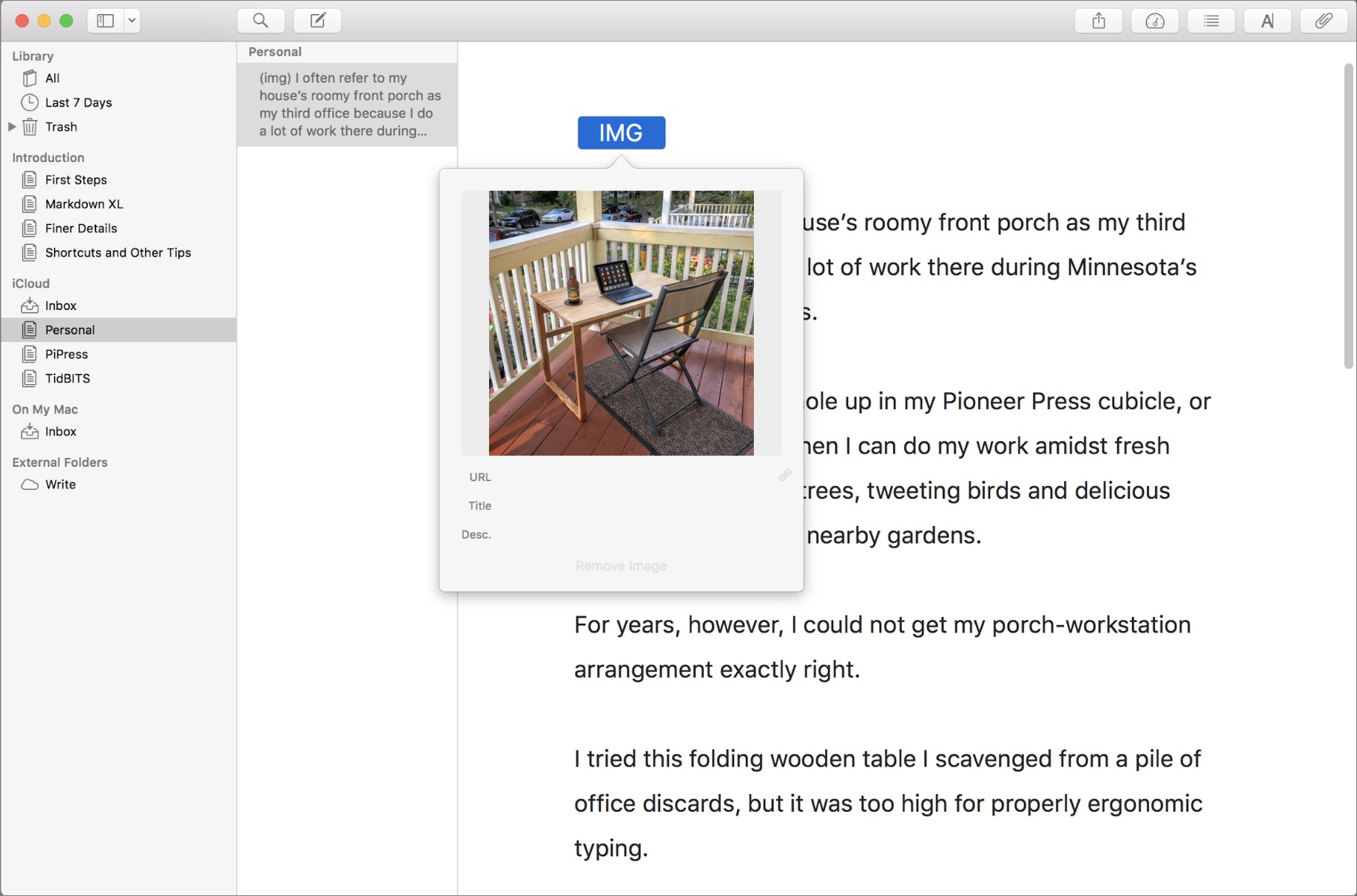 Sync and Export — Ulysses content fits into three buckets, each shown in the library. One of these is an iCloud repository, which syncs content among a user’s Macs and iOS devices. Most users would likely embrace this approach by default, but there is also an On My Mac option with content that resides only on the Mac and doesn’t sync anywhere else.

A third option, the previously mentioned External Folders bucket, has taken on greater importance with a recent update to Ulysses for iOS. That version now supports Dropbox syncing, which brings it in line with other iOS writing apps. For those using both the iOS and Mac versions of Ulysses, this means that you can anoint a Dropbox folder as a primary content repository that is available from any device.

Stashing a document in Dropbox also enables a simple collaboration scenario if two or more Ulysses users want to work on a document in a shared folder.

Regardless of where a sheet lives while in progress, you can export it in multiple ways. Format choices include plain text, HTML, EPUB, PDF, and Word’s DOCX. Those who are particular about how the output is formatted, what fonts are included, and so on can even specify a number of style parameters upon exporting a document. 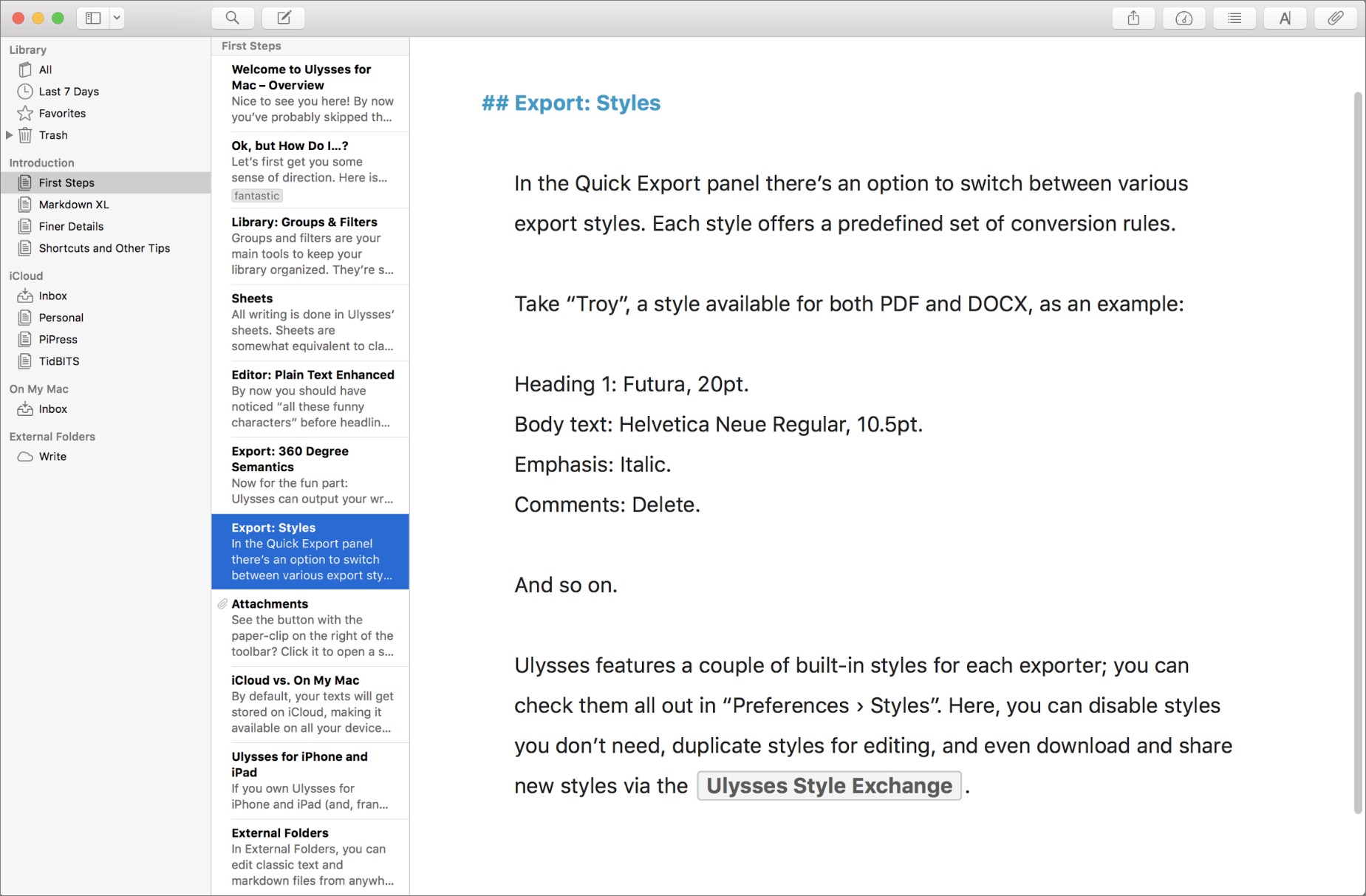 If you’re writing a book or other complex document and you need to consolidate content that has lived across more than one sheet, you can export multiple sheets at a time.

Ulysses export also includes a publishing option for bloggers. Users have been able to post content to Medium for some time, and recent upgrades added WordPress (PDF link) as a second posting destination. The Soulmen implemented this feature in a sophisticated manner, supporting both WordPress.com and self-hosted WordPress blogs. It includes HTML and Markdown as export choices, along with options to set categories, excerpts, tags, format styles, featured images, and posting times. 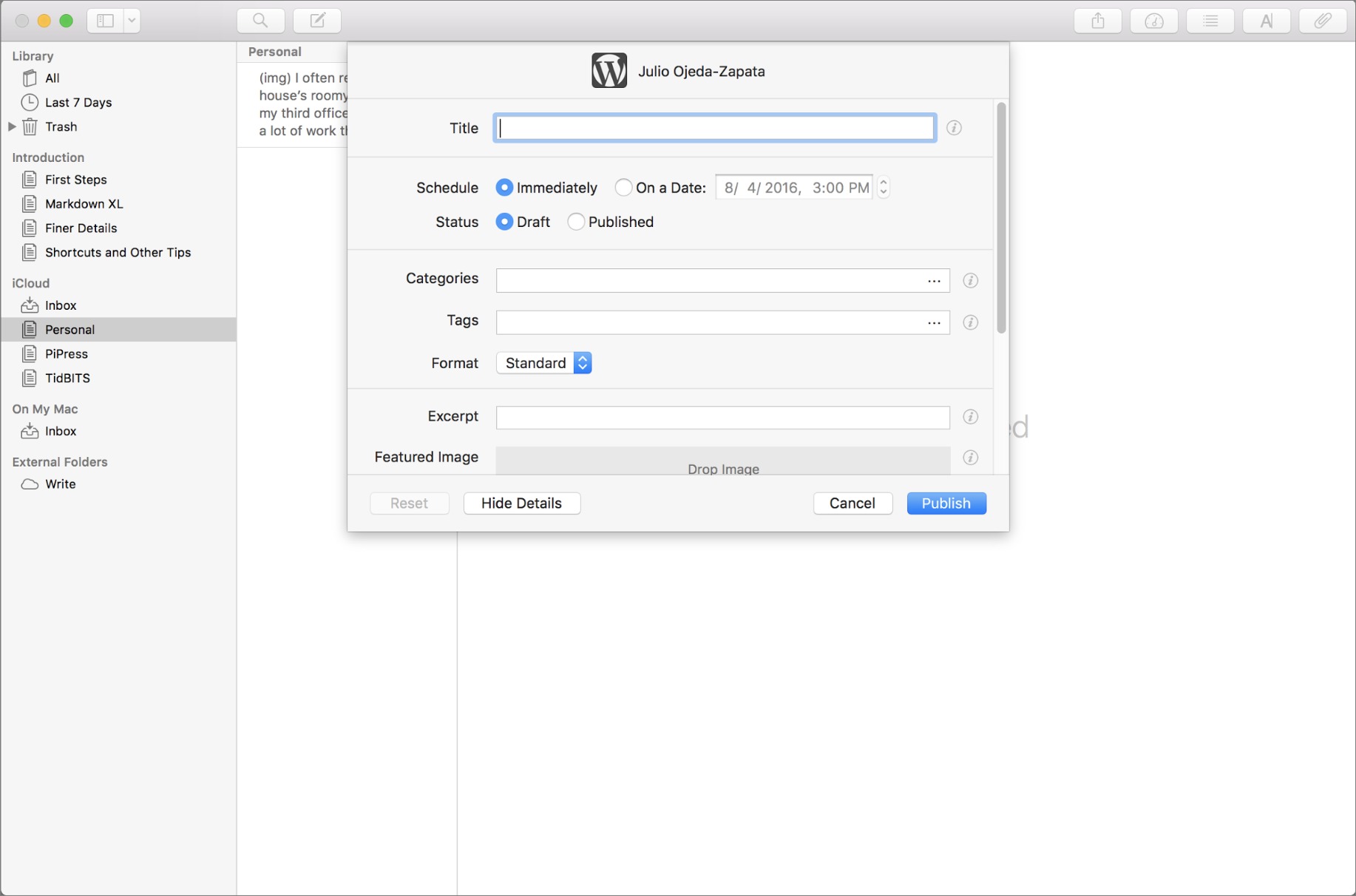 I can’t overstate how cool this is for WordPress users. I’ve been able to publish flawlessly to my personal blog, with even embedded pictures posting impeccably. I have also used Byword and WordPress’s Mac app for updating my blog, but Ulysses is shaping up to be my favorite WordPress client.

Other Features — Ulysses is a deep application, and you’ll be rewarded for poking around in its nooks and crannies. Features I found notable in the Mac app include: 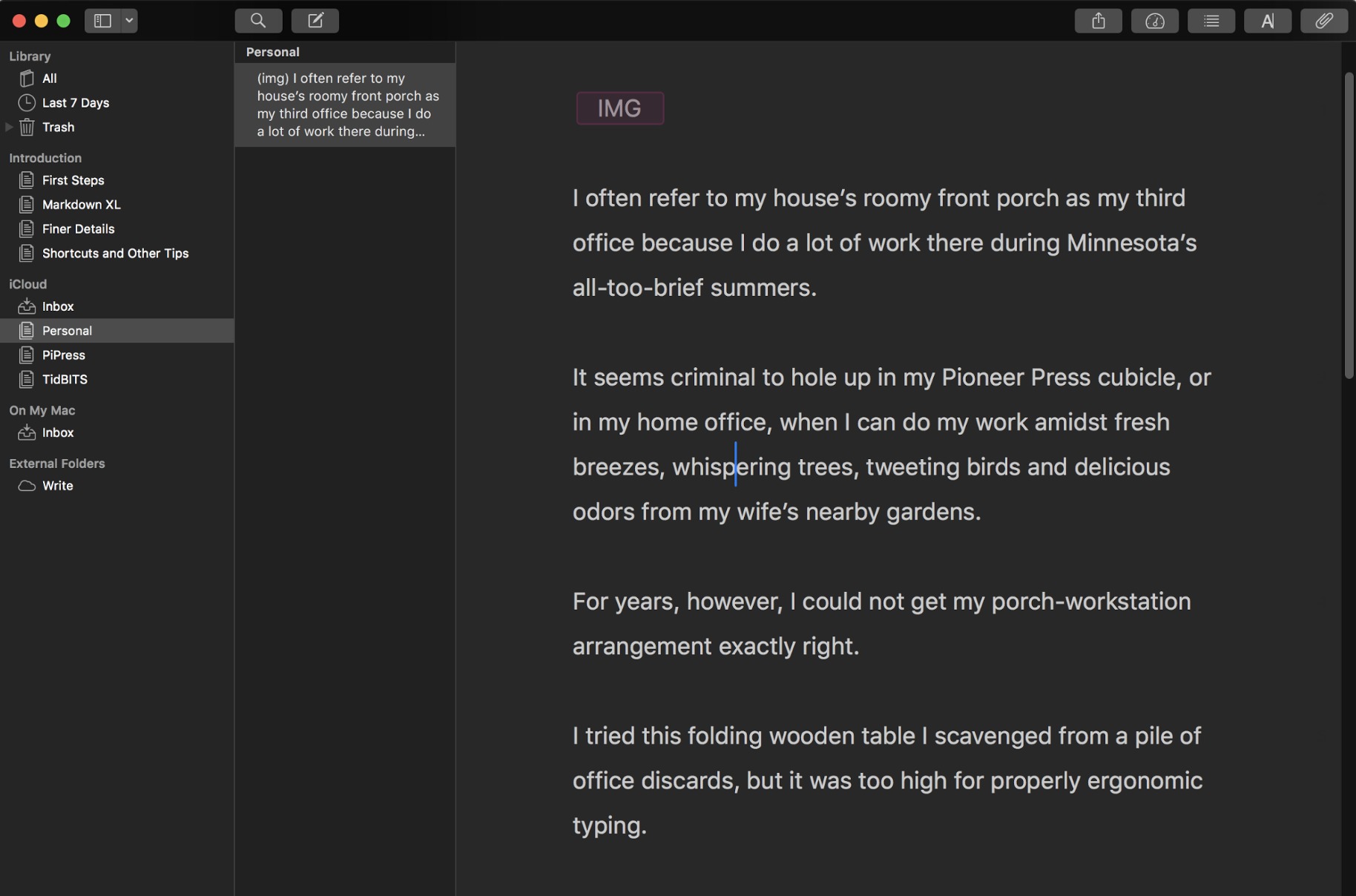 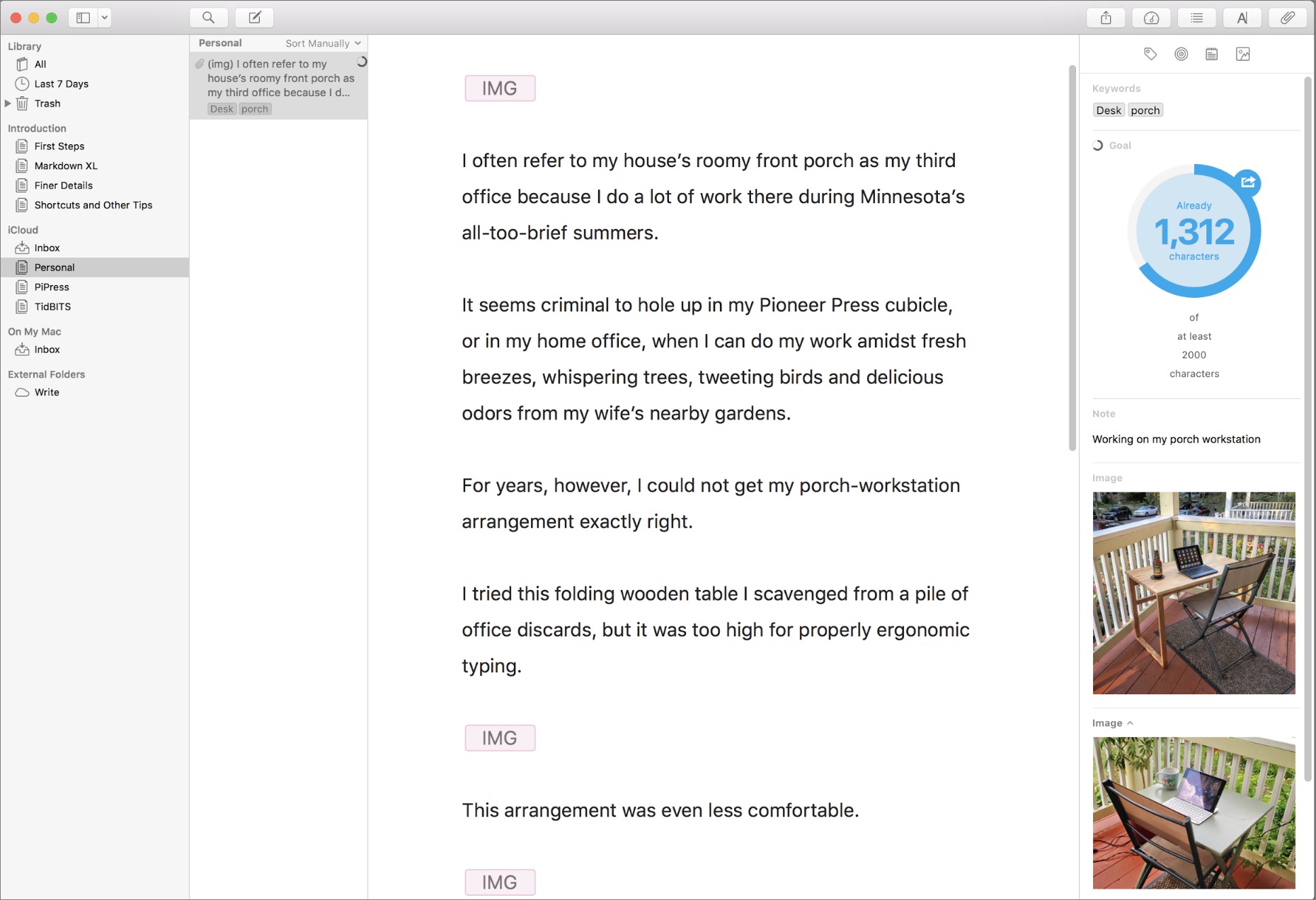 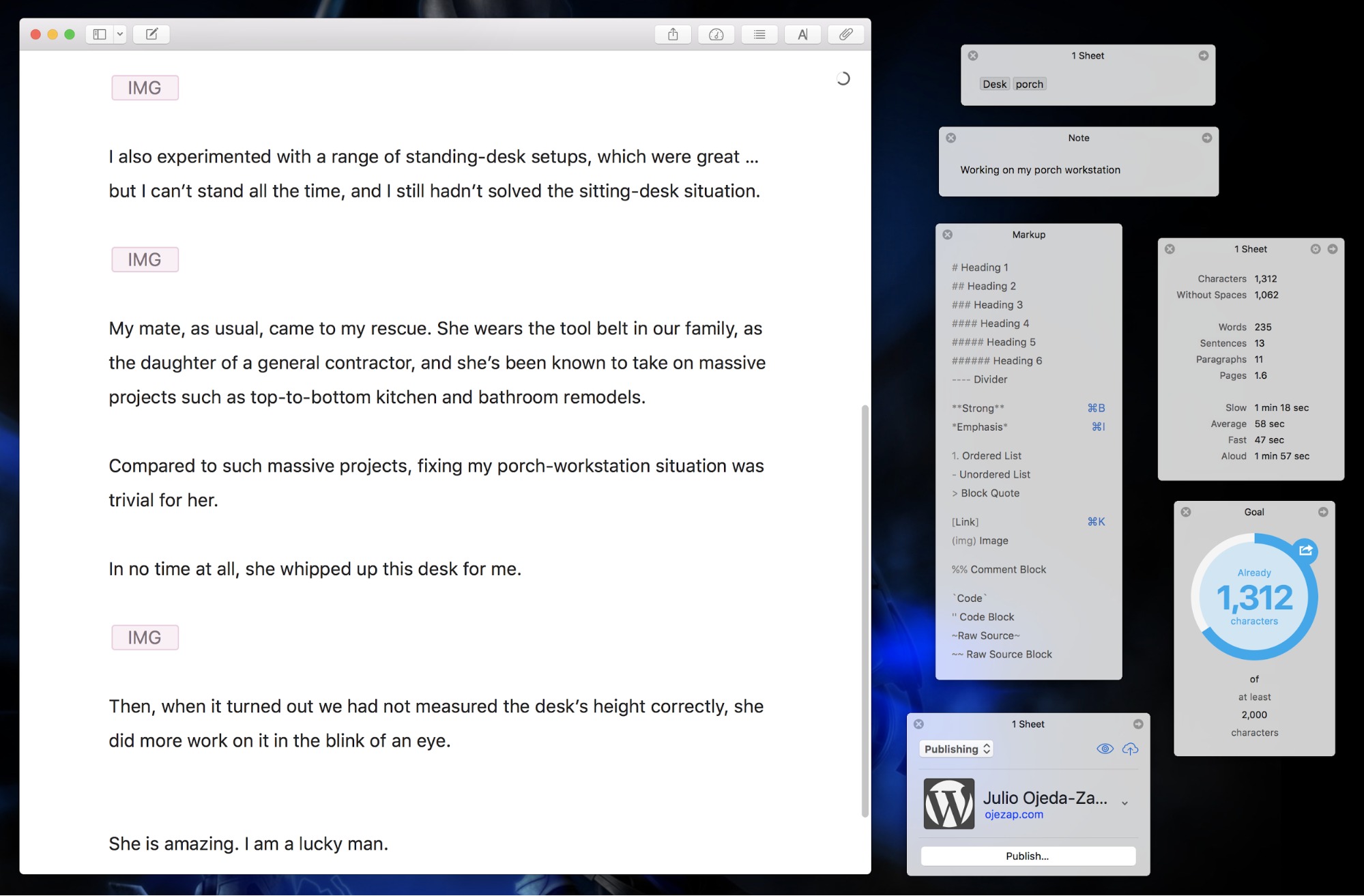 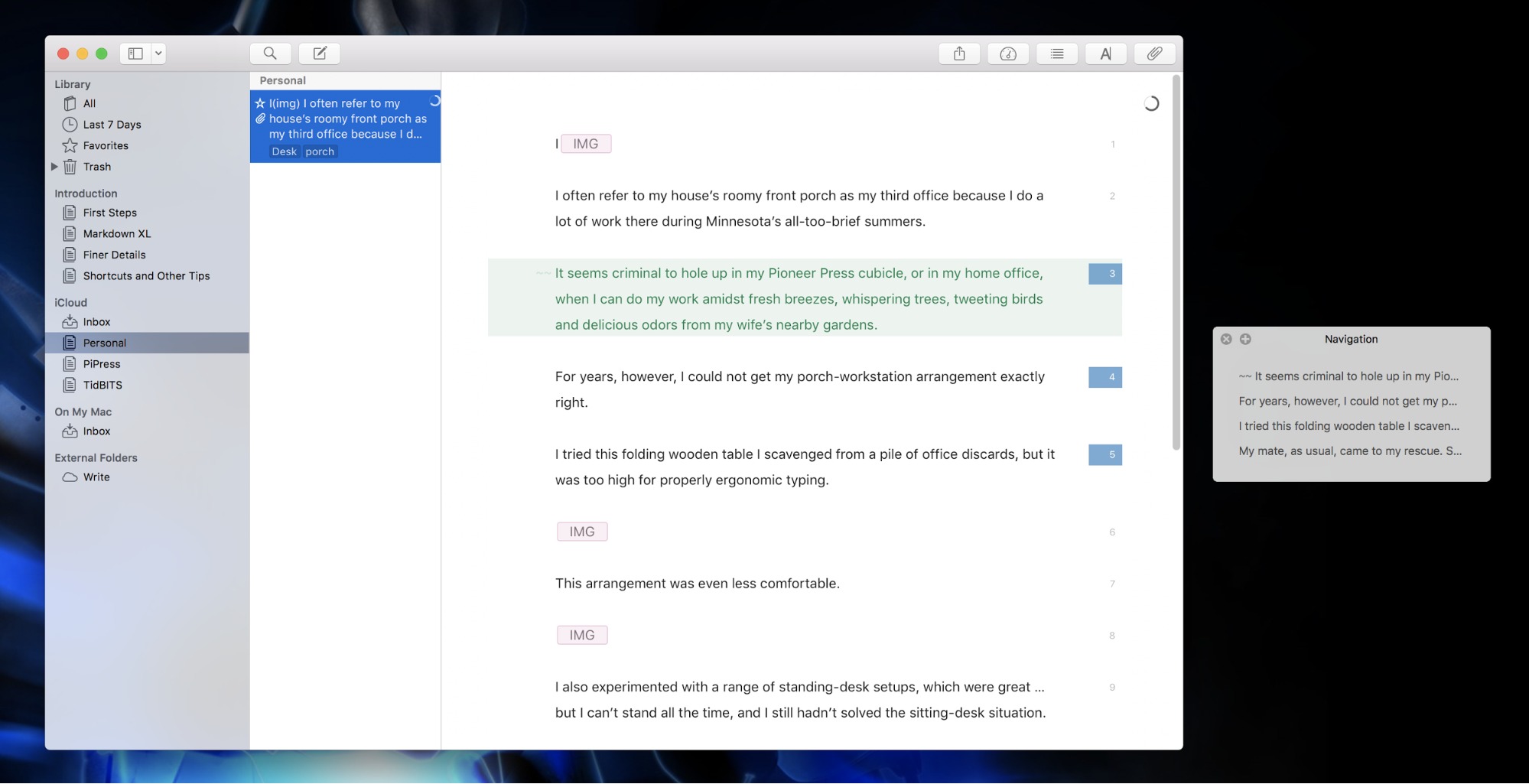 Wrap-Up — Ulysses fills a key niche as a personal writing app that packs a punch but doesn’t suffer from feature overload. It has particular appeal for writers who continually move among Macs and iOS devices and want to have a consistent work environment and no significant compromises on the iOS side.

For Markdown fans, Ulysses represents an upgrade from simple text editors while not going as far as a full-fledged word processor with a more sophisticated handling of styles and graphics. Even if Ulysses isn’t necessarily the ultimate Markdown editor for all (everyone has a favorite), it’s worth a look.

I’ve come to love Ulysses and lament that my particular circumstances keep me from using it as my default writing environment. I use Windows PCs regularly, and there is no Windows version of Ulysses (unlike Scrivener). What’s more, Google Docs is central to my work at my day-job employer and in my freelance duties, thanks to its greater collaborative capabilities.

If it were solely up to me how I put words on a screen, however, Ulysses would likely be my writing app of choice.