For many people, phone calls — at least those with real human beings, as opposed to “Rachel from Cardholder Services” — have become a thing of the past. Instead, an ever-increasing amount of real-time audio (and video) communication runs through a Mac or iPhone app.

When I need to talk with Josh about upcoming TidBITS content, we use a Slack call. Multi-person calls that Tonya and I have with Joe and Glenn and other Take Control authors take place in Skype or Google Hangouts. Even my father has asked me to use FaceTime Audio instead of the phone because he can hear me so much better that way. Podcasts like MacBreak Weekly, MacVoices, and Tech Night Owl Live all rely on Skype. Webinars run through GoToMeeting. If I help a friend or relative via screen sharing in Messages, that carries audio as well.

Amidst all that variability is one common factor — I have to mess with audio settings nearly every time! I’m not alone — the standard greeting for Internet-based calls isn’t “Hello,” but “Can you hear me?” Then we all scramble to fiddle the audio input and output settings in whatever app we happen to be in until everyone can hear everyone else. It’s nuts! Sure, phone calls can be scratchy over a cell connection, and they lack video, an associated text chat, and file and screen sharing, but when the phone rings, you can answer and be relatively assured that you’ll be able to hear the other person.

Fixing the audio settings for every call isn’t just extra work; it’s also confusing. Despite the fact that I’m not the sort who would intentionally build a complex audio setup, I’ve ended up with five choices for sound output and three for input, many of which are awkwardly named. Here’s where Apple could do some work, since good interface design lets you work without making you think about the interface.

If you Option-click the Volume menu bar icon, you can see and switch among all your outputs and inputs. Mine looks like this — let’s go through them. 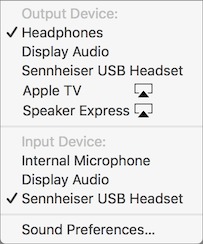 Output Device — Some of the output choices are confusing. For instance, Headphones isn’t right. I have Altec Lansing speakers plugged into my 27-inch Retina iMac, and that’s where audio plays when Headphones is selected. But I have to think about that fact every time I look at it, since I also have a Sennheiser USB headset, which is what I’d associate with the word “headphones.” There’s no way Apple could tell programmatically what you’ve plugged into the audio output jack, but External Speakers/Headphones would be a better label.

If I were to unplug my speakers, Headphones would change to Internal Speakers; as Josh explained in “The Headphone Port: The Mac’s Achilles Heel” (2 September 2015), the 3.5 mm audio output jack contains a sensor that disables the Mac’s built-in speakers when it detects a plug. For me, Internal Speakers wouldn’t be a great term either, since I have a Thunderbolt Display connected to my iMac, so “internal” could have multiple sensible interpretations. “iMac Speakers” would be better, with “iMac” replaced by the name of the Mac model in question.

Display Audio is the choice that throws me the hardest. It means the speakers built into the Thunderbolt Display, but because the word “display” works equally as well as a noun or verb, and many menus feature verbs, I have to parse it carefully every time. Since I tend to focus on the iMac’s screen for most of my work, I also usually think of it as my primary display, further muddying what Display Audio could mean. As you can see in the screenshot, because the Thunderbolt Display is both an output device and an input device, it’s replicated in the Input Device section, which forces me to look closely every time to make sure I’m working in the correct area.

From what I can see in the Audio section of System Information, Apple may not be able to learn the exact name of the device identified as Display Audio, but that may be Apple’s fault in designing the Thunderbolt Display, given that the Sennheiser headset identifies itself correctly. Just calling it Thunderbolt Display Speakers and Thunderbolt Display Microphone would be a big help. With a third party monitor, such as one from Dell, Apple should be able to identify at least the manufacturer, and thus change Display Audio to “Dell Speakers.”

The entries for Sennheiser USB Headset, Apple TV, and Speaker Express are entirely reasonable because they map directly to specific devices: in this case, my headset, Apple TV, and AirPort Express base station. I’ve used AirPort Utility to rename that particular base station to differentiate it from another called Printer Express, which shares our laser printer. If we had multiple Apple TVs, I could give them custom names via Settings > AirPlay > Apple TV Name.

Input Device — The issues for input device names are similar. Internal Microphone is a total cop-out on Apple’s part because Apple knows the Mac’s name and could change it to “iMac Microphone” or “Built-in iMac Microphone.”

Even better, Apple could give users the option of renaming all the output and input devices in the Sound preference pane. It wouldn’t require much UI — Apple could just make those names editable if you clicked them, much like clicking a file name in the Finder. Then you could give each device a name that made sense to you, just as you can with AirPort Express base stations and Apple TVs. 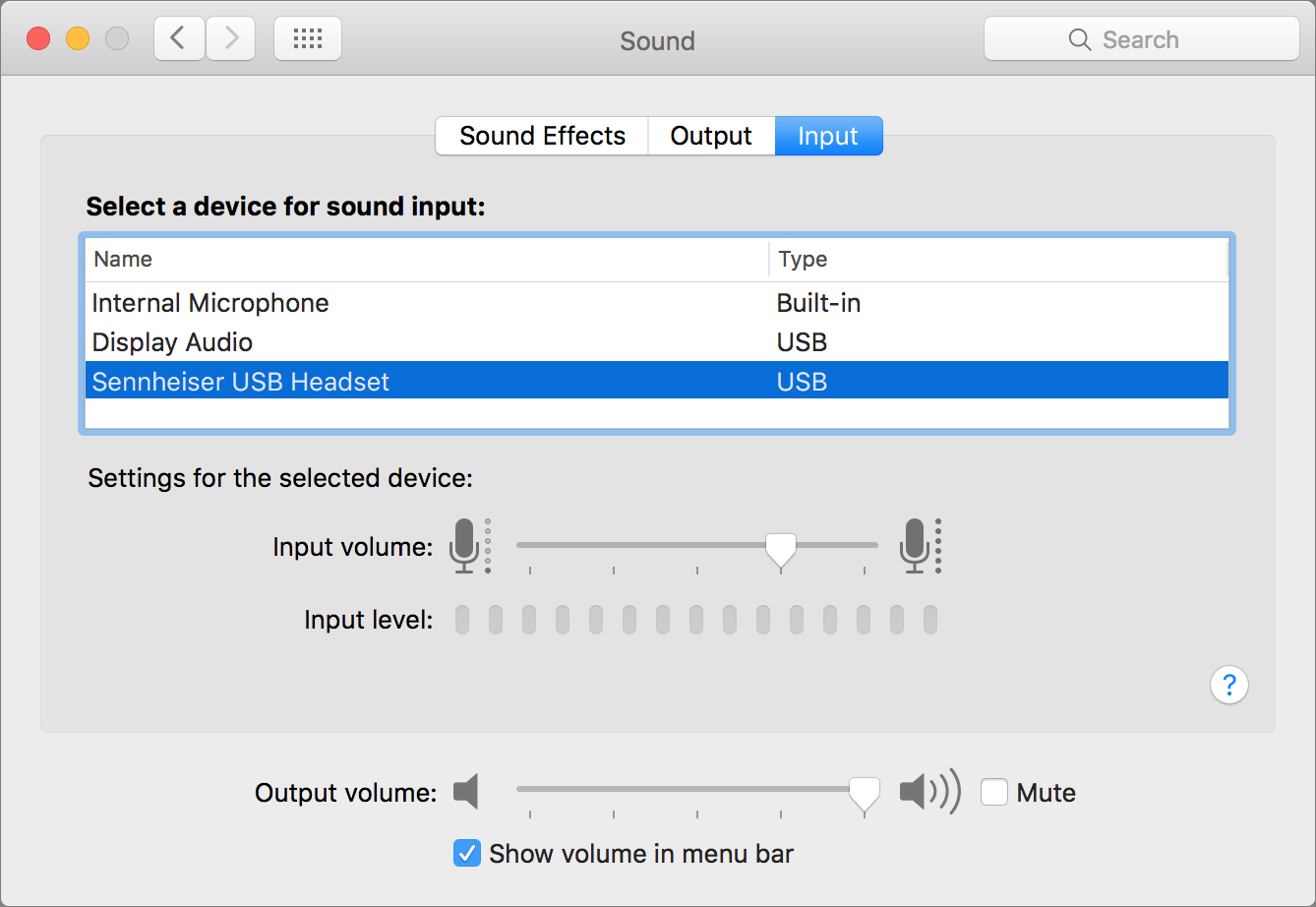 Telephony App Interfaces — This interface problem is exacerbated by the fact that the apps I regularly use for audio communication all use slightly different wording:

How any one of these apps ends up configured at any time is seemingly random. I’m sure it isn’t actually random, but since I can go days or even weeks without using a particular app, each time I do launch one, I have to make sure its audio settings match what I’m expecting. All too often, they don’t, forcing me to ponder all the options yet again while asking, “Can you hear me?” — it’s maddening.

The simple solution is for Apple to allow us to name our inputs and outputs as we like. Customized names would go a long way toward making it easy to identify particular devices at a glance.

Comments About How Apple Could Simplify Audio Input and Output Interfaces