The original Apple Watch, though groundbreaking in numerous ways, disappointed many when Apple trotted it out last year. It garnered criticism for being bulky and underpowered while lacking certain important features, such as a GPS chip and water resistance. Its screen was sometimes hard to make out in bright sunlight, too.

Apple has now announced the Apple Watch Series 2, which is the same size as the original. So much for fantasies about a thinner, less obtrusive watch. However, Apple did check off vital items on Apple Watch users’ wish lists: water resistance, more horsepower, a brighter display, and most important, a built-in GPS chip.

Apple also announced a handful of specialty models – notably a new and supposedly extra-durable white ceramic Apple Watch Edition Series 2, which replaces the gaudy gold Apple Watch Edition. Apple is also keeping the original watch model around at a lower price along with a processor upgrade and a new moniker: Apple Watch Series 1.

Let’s Go for a Run — Runners and other athletes have long been irked that the Apple Watch lacked a GPS chip, making it necessary to carry a bulky iPhone during a run in order to track the route and get performance stats. That necessity should be a thing of the past courtesy of the Apple Watch Series 2’s integrated – and, crucially, iPhone-independent – GPS chip. It enables the Apple Watch to record precise distance, pace, and speed during outdoor workouts such as walking, running, or bicycling – no iPhone required (cue singing angels and a happier publisher; see Adam Engst’s “Exercising with the Apple Watch: The
Hardware,” 15 May 2015).

At the start of a workout, according to Apple, a Series 2 watch uses a blend of Wi-Fi, GPS, and locally stockpiled satellite data to pinpoint a user’s location quickly. Upon completion of a workout, a route map with speed data appears in the watch’s Activity app. This all counts towards filling in those Stand, Move, and Exercise rings, naturally. We expect to see third-party apps from the likes of Strava and Runkeeper take advantage of the new GPS capabilities as well.

Though GPS is a genuinely welcome improvement, note that the Series 2 still lacks cellular connectivity — found in some rival timepieces — that allows for phone-independent voice calling and data transfers when away from Wi-Fi. Perhaps we’ll see that in the Series 3 in 2018.

Let’s Go Swimming — Brave owners of the original Apple Watch have been known to take their wearables into the shower or pouring rain with no consequences. Although they were rated at IPX7, Apple said that the original devices were “splash and water resistant, but not waterproof,” and recommended against submersion.

Apple is touting the Series 2 models as vastly more resistant to water, certifying them for dunks in a pool or open water at a depth of up to 50 meters (164 feet). Apple said it accomplished this by aggressively plugging up all the ingress points – with the exception of the speaker, which must be open in order to work as intended. Apple claims to have resolved that problem with a new speaker that can actively eject water (insert your own jokes here).

More Power! — The original Apple Watch was woefully slow, causing users no end of frustration. Some of its sluggishness was due to inefficiencies in watchOS 1 and watchOS 2, due to be corrected in watchOS 3, but the hardware deserved major blame too.

Apple says that its new second-generation dual-core S2 System in Package (SiP) in the Series 2 watch will take performance “to a new level,” and make the Apple Watch 50 percent faster. The S2 SiP also sports a new GPU that promises significantly improved graphics performance, to the point where it can even run video at 60 frames per second.

The upgraded innards will also drive a brighter display. At 1000 nits, it’s more than twice as bright as the original Apple Watch’s screen, and it has the distinction of being the brightest display Apple has ever shipped on any device. The new screen should be much more readable in bright sunlight, a distinct problem with the original model.

The dual-core S2 chip is going into the lower-cost Series 1 watches, too, so even budget-conscious Apple Watch buyers will get zippier performance.

The Fancier Options — Apple’s original version of the fancy Apple Watch Edition was made out of gold. Now, maybe fearing bored yawns among its monied clientele or perhaps chagrined at slow sales of expensive watches whose prices topped out at $17,000, Apple has shifted direction.

The new Apple Watch Edition Series 2 is made out of ceramic. This might conjure up images of plates or ashtrays falling to the floor and shattering – but Apple said it’s not that kind of ceramic. Far from it, Apple claims its zirconia ceramic is four times tougher than stainless steel with “a beautiful, white, pearl-like finish” that is “extremely scratch-resistant.” 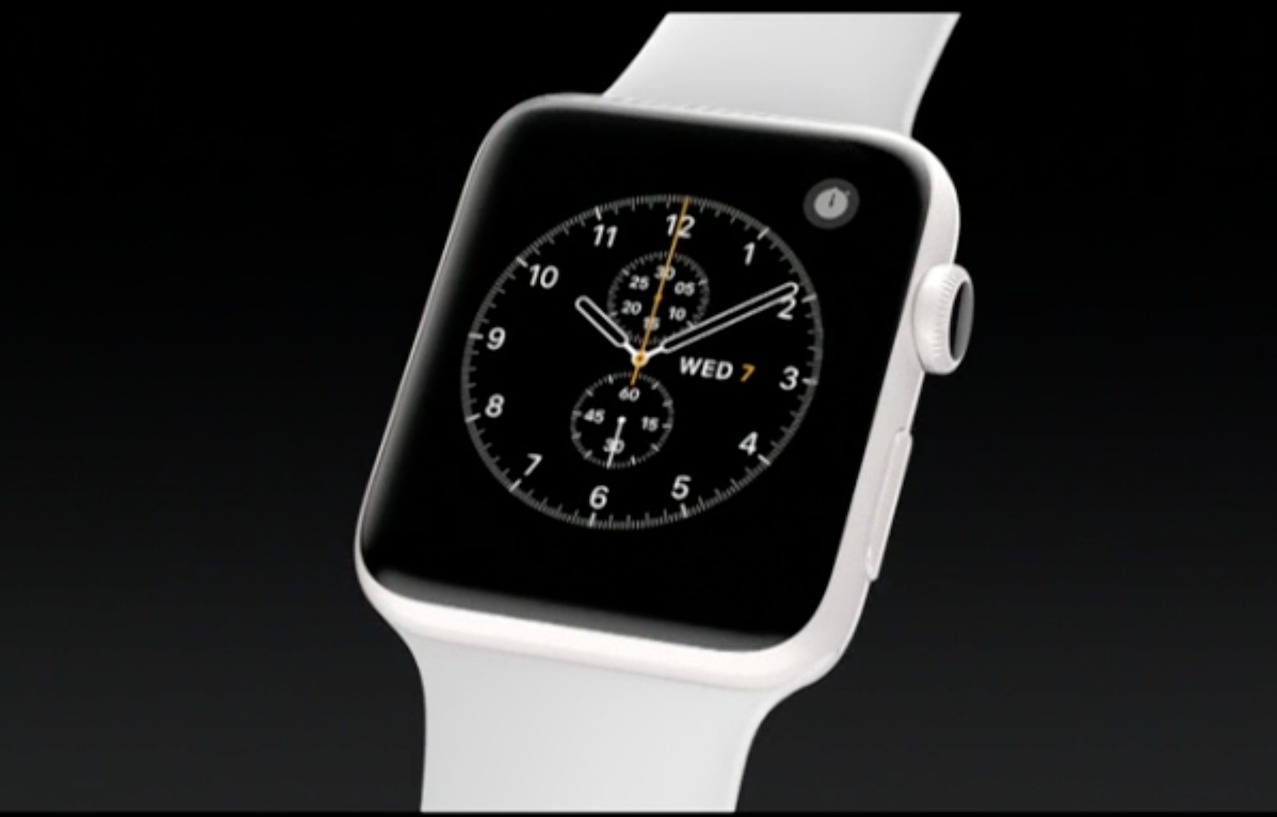 The ceramic Apple Watch Edition looks to be tricky to track down since, like its precursor, it will be sold only at a limited number of Apple stores and Apple-authorized resellers.

Apple also announced two other specialty Apple Watch options. The Apple Watch Nike+ Series 2, offered in a partnership with the footwear manufacturer, is basically a stock Series 2 watch with Nike-like aesthetics – including Swiss cheese-like, sports bands in a choice of four black and gray designs. Two of these bands have bright yellow accents (a color that Apple flaunted on-screen with a custom watch face). The watch includes the Nike+ Run Club app, too.

For those who fancy Hermès luxury products, Apple also will sell you an Apple Watch Hermès Series 2 with your choice of redesigned Hermès leather bands.

Model Breakdown — All Apple Watch models are available in the same two case sizes as before, 38mm and 42mm. Series 2 and Series 1 watches are all available in aluminum and stainless steel with gold, rose gold, silver, or space gray coloring – no surprises there.

Cost is one crucial differentiator. Series 2 watches, including the Nike+ model, start at $369 while Series 1 models now start at $269. Dropping that price is a welcome move since the Apple Watch has been regarded by many as pricey. The starting prices are for 38mm models and increase with the 42mm model and with certain bands.

On the high end, the ceramic Apple Watch Edition Series 2 begins at $1249, and the Hermès-branded model starts at $1149.

You can also preorder the Nike+ version on 9 September 2016, but it won’t become available until October. The Apple Watch Hermès Series 2 goes on sale 23 September 2016.