Apple opened its September event with a special edition of James Corden’s “Carpool Karaoke,” featuring Tim Cook, Pharrell Williams, and Corden singing “Sweet Home Alabama” as the car pulled up to the stage door entrance so Tim could walk in and begin the show. Even when he did, the presentation remained an exercise in delayed gratification, as Cook held back on the big, anticipated announcements so that he could do a bit of updating on current Apple initiatives.

If you don’t have time to watch the entire event, Apple has posted a very quick, very loud summary video to YouTube.

Cook began his on-stage stint with an Apple Music update, noting that the service now has 17 million subscribers, and he briefly described the new interface coming to Apple Music in iOS 10, which he described as “simple and intuitive.” He finished that segment of the presentation by promoting the upcoming Apple Music Festival (formerly known as the iTunes Music Festival) to be held at the Roundhouse in London from September 18th through 30th.

From music, Cook turned to the App Store. Noting that the App Store has now tallied more than 140 billion apps downloaded since its debut, he announced that the store had generated twice the revenue of its closest competitors in the previous two months and had experienced 106 percent year-over-year growth. These statistics seemed designed to mollify investors harboring worries over the company’s recent decline in profits (see “Apple Beats Expectations in Q3 2016, but Slump Continues,” 26 July 2016).

One of the factors behind the App Store’s recent growth is games — can you say Pokémon Go, which has been downloaded over 500 million times? The App Store currently carries more than 500,000 games, and Cook used that statistic as an opportunity to bring out Nintendo’s Shigeru Miyamoto, creator of the Super Mario Bros. and Legend of Zelda franchises — he’s essentially the Walt Disney of video games. With the help of a translator, Miyamoto gave a demonstration of his company’s forthcoming Super Mario Run — Nintendo’s first full iOS game, and the iconic character’s iOS debut (our 2014 April Fools article notwithstanding). In an App Store first, you can sign up to hear when Super Mario Run becomes available to purchase, which Nintendo expects to be during the 2016 holiday shopping season. Super Mario stickers will also be available in Messages with the rollout of iOS 10. 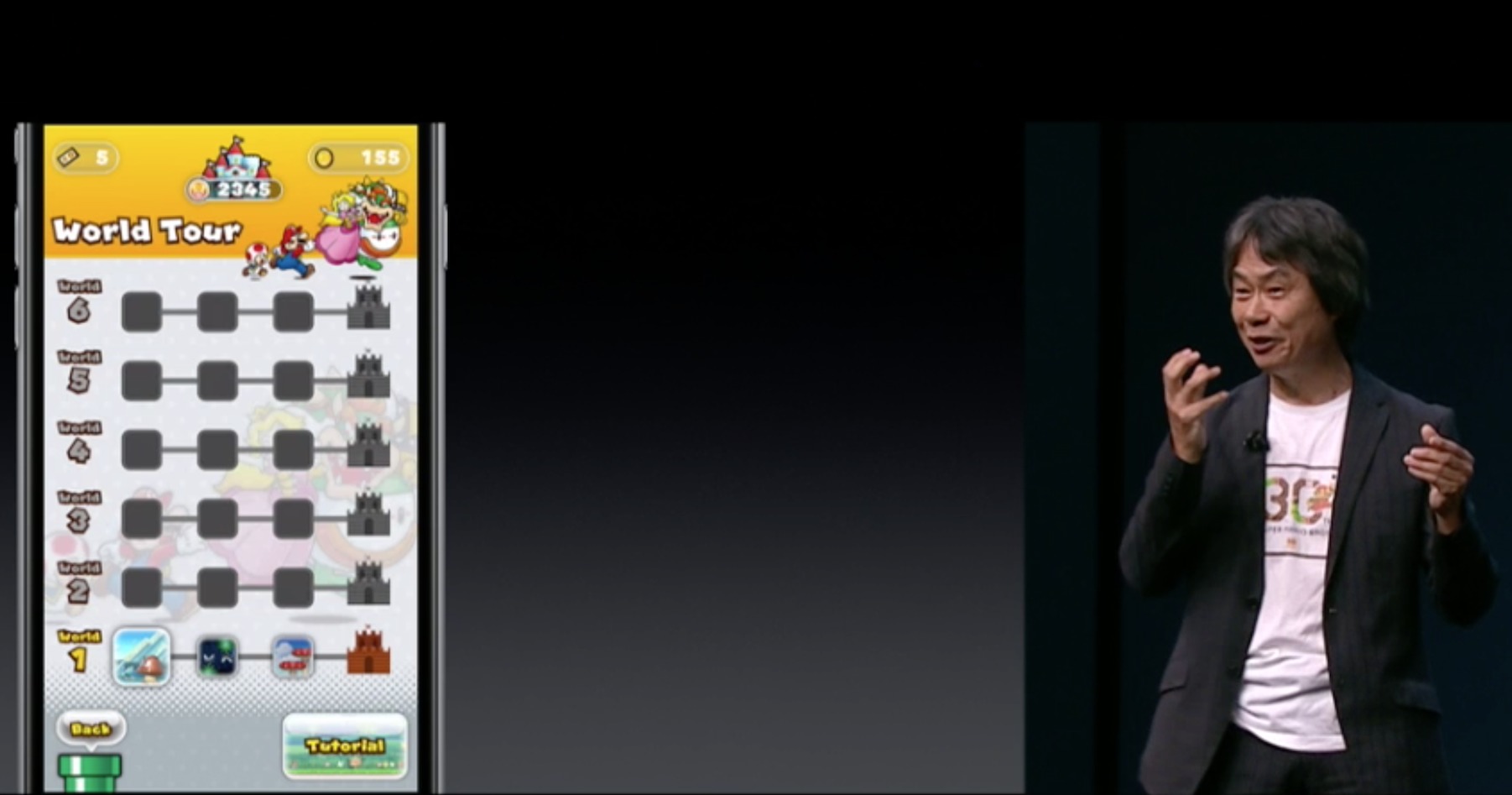 Speaking of Pokémon Go, developer Niantic announced an Apple Watch version of the game that will let players perform many common actions without having to pull out their iPhones.

But it wasn’t all fun and games in the prelude that led up to Apple’s big announcements. Apple has long been interested in education, and Cook took the opportunity to share what Apple is doing in the White House’s ConnectED program. Under this program, which provides funding, equipment, and support to “under-served” schools around the country, Apple will supply 114 schools with Macs, iPads, and Apple TVs: 4500 teachers will receive iPads and Macs, Apple TVs will be installed in every classroom in the participating schools, and more than 50,000 students will receive iPads. (This is great, and we’re not criticizing, but to give a sense of scale, there are nearly 100,000 K-12 schools in the United States and almost 55 million students, meaning that Apple’s contribution to ConnectED will affect 0.1 percent of the country’s schools and students.)

What will those students and teachers be running on that equipment? Among other things, Swift Playgrounds, a learning environment for coding that ships with iOS 10 and that is augmented with teaching guides and instructional tips.

Along with Swift Playgrounds, students will be able to use updated versions of Apple’s iWork apps. Cook ceded the stage to Susan Prescott, senior vice president of product marketing, who demonstrated the newest feature in iWork: real-time collaboration. Although iWork has long allowed document sharing on both Mac and iOS devices, real-time collaboration capabilities previously had been limited to the browser-hosted versions of the apps.

The new iWork apps, however, now support real-time collaboration natively on all devices, which Prescott illustrated by building a Keynote presentation with animations and graphics supplied by both her and collaborators. Because teaching students to work collaboratively has become an integral part of many curricula, this addition to the iWork suite promises to make the apps a more compelling option for educators, including those who are not part of the ConnectED initiative. However, collaboration is something Apple has struggled with numerous times in the past (see “iWork for iCloud Beta Recalls iWork.com,” 10 June 2013), so we’re curious to see if these new features will, in fact, prove useful to educators, or anyone else.

Following that demonstration, Cook and his compatriots took the stage to present new watches, new phones, new cameras, new earbuds, and more. You can read about those announcements in the following articles:

Finally, although Apple made no mention of the Mac or iPad during the presentation, later that day, the company published the release date for macOS 10.12 Sierra (it will debut on 20 September 2016) and adjusted the iPad lineup slightly (see “Apple Tweaks iPad Configs and Pricing,” 12 September 2016).

Apple Inc. Entertainment Tech News
Cookies & Privacy: We wish we were talking about chocolate-chip cookies here, but our Web site—like nearly all others—relies on a few minor digital cookies. Various laws around the world require us to tell you that fact, so consider yourself informed, if not nourished. By continuing to use this site, you agree to our use of these cookies. Cookie and Privacy Notice