For many years, if you needed to throw up a quick Web site, one of the easiest ways to do it was to put HTML-formatted text files and linked graphics in your Dropbox folder’s Public folder. Control-click the index.html file for your site in the Finder, choose Copy Public Link to get the URL to the page, and you had a fully functional site to share. This worked because Dropbox allowed HTML files to be rendered by the browser instead of forcing them to be treated as downloads. Dropbox hasn’t been enthused about this feature for years, but the company let it continue (see “Dropbox Public Folder Leaves and Returns,” 14 July 2012).

Unfortunately, as of 3 October 2016, Dropbox says it will no longer allow HTML files loaded in a Web browser to be rendered. The files themselves remain safe in Dropbox, but Dropbox will presumably give those who click the links the options of downloading the file or adding it to their own Dropbox folder, just as happens with non-Web file types now. Thanks to reader Vic Case for alerting us to this development; although Dropbox informed some users, neither I nor Joe Kissell, author of “Take Control of Dropbox, Second Edition” received any such notification. 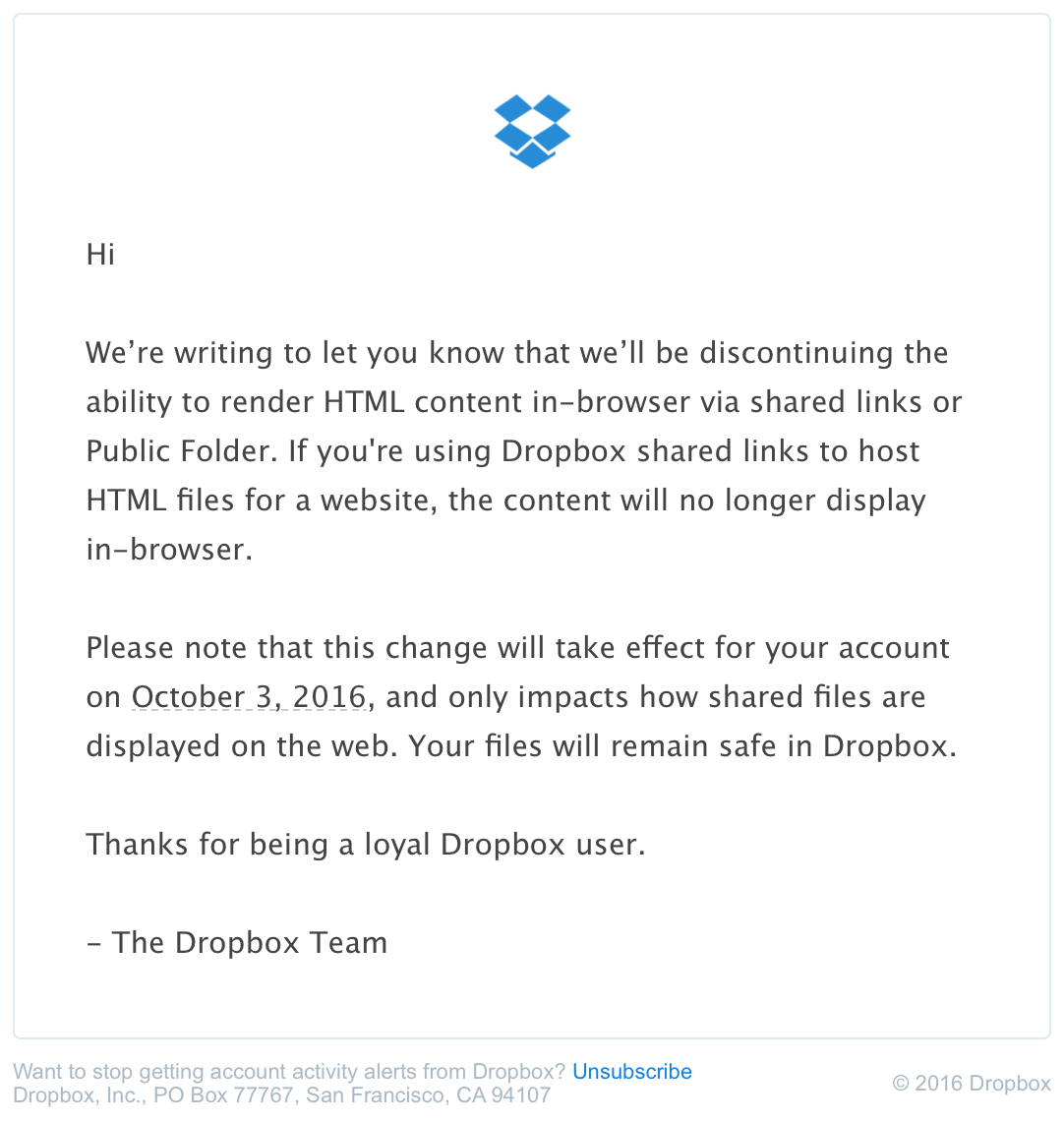 So, if you’re hosting a simple Web site via Dropbox, you have a few weeks to find an alternative host and update any links to your site. You might think that you could just switch to Google Drive, which also provided this sort of service, but Google Drive also discontinued hosting of Web pages as of 31 August 2016.

Alternatives abound, but finding one that is equivalently simple (and cheap, if you were using a free Dropbox account) could require some research. A year ago, Scott Murray, then an Assistant Professor of Design at the University of San Francisco, published a rundown of services that offer cheap or free hosting of static Web sites to help graduating seniors keep their sites alive after their student accounts were deleted. It’s now somewhat dated, with Dropbox and Google Drive gone, and some resources are appropriate only for students, but it’s still a good start.

I don’t want to make any recommendations in this area since I have no experience with any of the choices. Instead, I’ll open it up to readers — if you’re hosting a simple static Web site, where are you doing it, how much does it cost, and how happy are you with the service?