Yes, the rumors are true: the next generation of iPhone — the iPhone 7 and the iPhone 7 Plus — get rid of the nearly universal headphone jack. Why? Apple’s Senior Vice President of Worldwide Marketing Phil Schiller summed it up in a word: “Courage.” Yes, “courage,” hearkening back to Apple’s prior decisions to abandon floppy disks, optical drives, and legacy ports. Or how Apple plans to deal with the inevitable criticism.

After we stopped giggling at this pronouncement of courage, we tried to focus on how Apple made up for the missing analog jack. Every new iPhone will ship with a Lightning-to-headphone adapter so you can still plug in your existing devices. Also, the new iPhones will be bundled with Lightning-connected EarPods. Sadly, neither the adaptor nor the new EarPods allow the iPhone to be charged when they’re plugged in — we expect third-party vendors will fill in that gap. Fortunately, extra Lightning to 3.5mm Headphone Jack Adapters will cost only $9 from Apple.

However, Apple said the future is wireless, which begs the question of why the company doesn’t have the courage to go whole hog and include its new wireless AirPods in the box (the price of courage would then be $159, in case you were wondering). The good news is that Apple isn’t leaving you at the mercy of stock Bluetooth audio: the new AirPods introduce Apple’s proprietary W1 chip, which enhances the Bluetooth experience for the AirPods and other headphones from Apple subsidiary Beats (see “W1-powered AirPods Usher in a New Era of Wireless,” 7 September 2016).

How big of a deal is the lack of a headphone jack? It wasn’t popular, with a post-announcement survey of 1140 American consumers by Toluna Quicksurveys revealing that Apple’s move ranks among the least favorite changes in the iPhone 7. However, Toluna Quicksurveys added a couple of exclusive questions at our request. Of the respondents, 74 percent said that the lack of a headphone jack wouldn’t affect their purchase decision, and 56 percent of respondents went further, saying that it wouldn’t even require them to change their habits, presumably because they already rely on wireless audio or the iPhone’s built-in speakers.

Speaking of speakers, you may not need to plug in as much for audio, since the new iPhone will be the first to feature stereo speakers: one on the top and one on the bottom. Apple also said that the new iPhone 7 models produce twice the volume of the iPhone 6s units.

What else do you get in exchange for losing that headphone jack? Water and dust resistance. Apple claims the new iPhones are IP67 compliant, which means they are completely protected against dust and protected against immersion in up to 1 meter of water. IP67 is the highest level of dust protection and the third-highest level of water protection. Realistically, your iPhone 7 should be fine if you accidentally drop it in the tub, but losing it overboard in anything but shallow water may still kill it. Apple still warns that the iPhone warranty doesn’t cover liquid damage, so for safety, we
recommend assuming that the iPhone 7 is no different than previous models. Concerning dust, we hope the Lightning port doesn’t collect pocket lint like the ports in earlier models did — a blast of compressed air is often the solution to odd charging problems.

Apple has redesigned the Home button. Like the Force Touch trackpad, the Home button is now a “force sensitive” software button that Apple claims is more responsive and more reliable. Apple integrated the Home button with a new generation of the Taptic Engine, which comes with an API — we’re curious to see how developers take advantage of the new hardware. Perhaps an iPhone 7 will be able to give you text messages in Morse code?

The biggest improvements to the iPhone 7 are its cameras. Yes, cameras, because while the iPhone 7 includes one dramatically improved rear-facing camera, the iPhone 7 Plus features two cameras on the back of the case.

The camera in the iPhone 7 includes a 12-megapixel high-speed sensor with an ƒ/1.8 aperture six-element lens that Apple claims is 60 percent faster and 30 percent more energy efficient than the camera in the iPhone 6s. The flash now features four LEDs, which Apple says offer 50 percent more light, plus a flicker sensor to help the software correct for artificial lighting. Optical image stabilization, formerly exclusive to the Plus model, is now standard on the iPhone 7.

As noted, the iPhone 7 Plus features two 12-megapixel sensors: one with a wide-angle lens and the other with a telephoto lens with an ƒ/2.8 aperture. Putting these together enables two new features: 2x optical zoom (up to 10x in software) and a new depth of field effect, which produces photos in which people in the foreground are in focus while the background is blurred. While Schiller was quick to admit that the iPhone 7 Plus’s camera isn’t up to DSLR quality, it’s a big step closer. The depth of field effect, which you’ll access via a new camera mode labeled Portrait, will not be available at launch, but will instead arrive in a free iOS update “later this year.”

Both iPhone models can also capture raw images with wide-gamut color, and offer stabilization and editing for Live Photos. Apple is also releasing capture and editing APIs for Live Photos, so developers can create tools to work with them. Last but not least, the front-facing FaceTime HD Camera now offers 7-megapixel resolution, body and face detection, and automatic image stabilization.

Complementing the improved cameras is a new Retina HD display that’s 25 percent bright and offers cinematic color and built-in color management. That should be welcome news for photographers. Instagram demoed new effects and filters that take advantage of the expanded color gamut.

Under the hood, the new iPhones feature a new A-series processor, the quad-core A10 Fusion with an embedded M10 motion coprocessor. Interestingly, two of the four cores are dedicated to high performance, while the other two are optimized for power efficiency, using 20 percent of the power of the other cores. A new Apple performance controller automatically switches between the two sets, depending on what’s needed.

The A10 Fusion processor includes a new Apple-designed image signal processor, which applies over 100 billion operations (we assume this is a generous definition of “operation”) and machine learning to every photo you take. It also allows for faster focus, improved local tone mapping, and better white balance.

Relatively little changes regarding networking, but the iPhone 7 and 7 Plus support 25 LTE bands, with theoretical speeds of up to 450 Mbps. We doubt you’ll see such throughput anytime soon.

Apart from the cameras, the form factors of the iPhone 7 and 7 Plus are the same as the iPhone 6s and 6s Plus, but the color options are slightly different. The new iPhones will feature the now-standard gold, silver, and rose gold finishes, but Apple swapped space gray for two shades of black: a shiny “jet black” finish and a matte finish, that Apple calls “black.” Apple cautions buyers that the jet black finish can scratch, but reports from those who have held it indicate that it’s less slippery than the other finishes. The new models are 5 and 4 grams lighter than the previous models, respectively.

Finally, Japanese models of the iPhone 7 and 7 Plus (and the Apple Watch Series 2; see “Apple Watch Series 2 Offers GPS, Water Resistance, and More Power,” 7 September 2016) will include FeliCa contactless technology, enabling Apple Pay to work in Japan (for more on this, see “Around The World With Apple Pay,” 13 May 2015). In other news for Japanese users, Apple said that transit directions for locations in Japan should become available in Maps in October.

Pricing of the iPhone 7 and 7 Plus remains the same as for previous models, but the storage amounts double, so:

If the upfront cost is too much for you, you can instead choose the iPhone Upgrade Program’s payments of $32 to $46 per month for 2 years, depending on which model you want. iPhone preorders started on 9 September 2016, with availability promised for 16 September 2016. In fact, depending on your carrier, you may have multiple purchasing options, and after you’ve configured an iPhone in Apple’s online store, you’re shown those options. Clicking a Compare Payment Options at the bottom displays an informative table of all the possibilities. 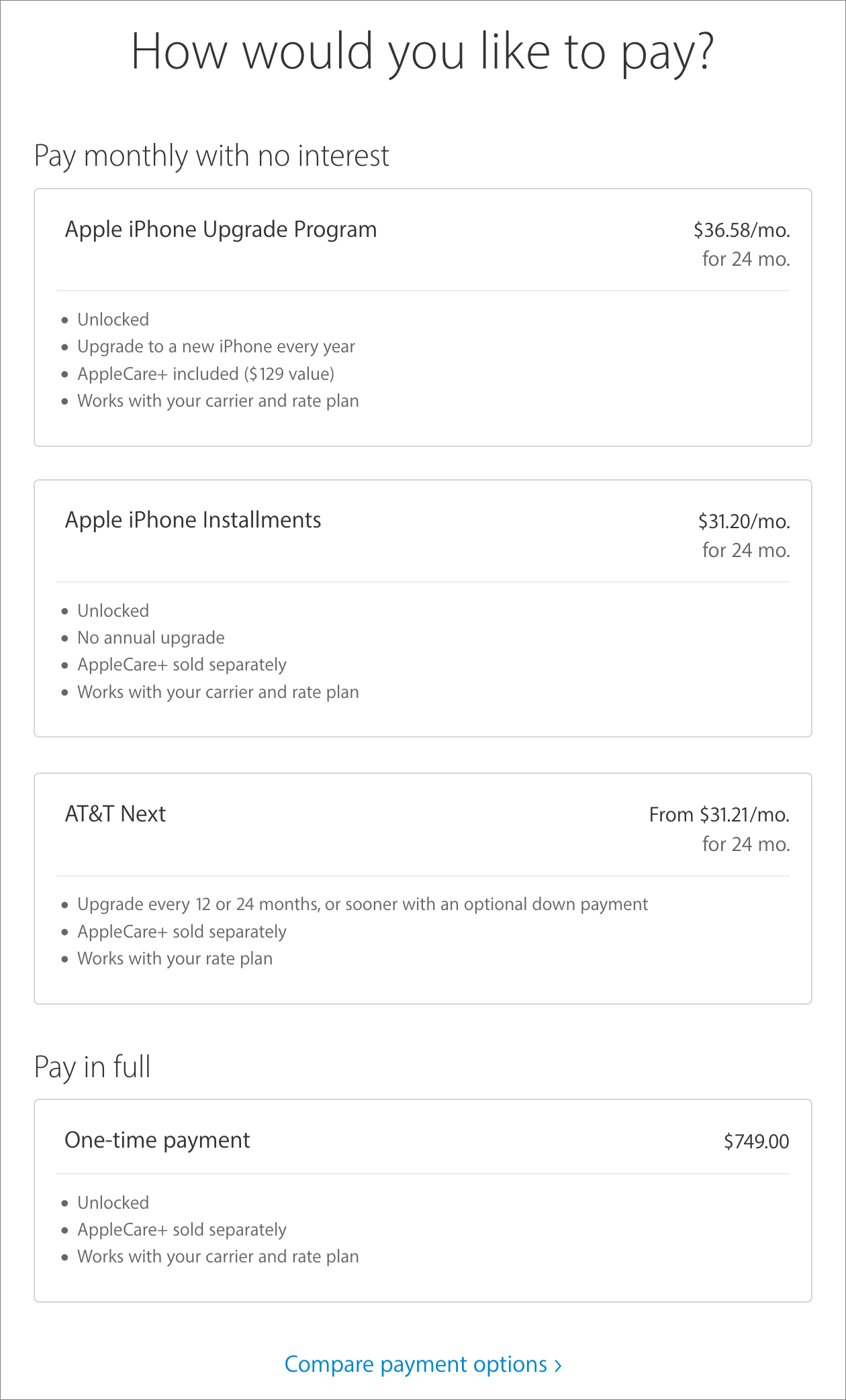 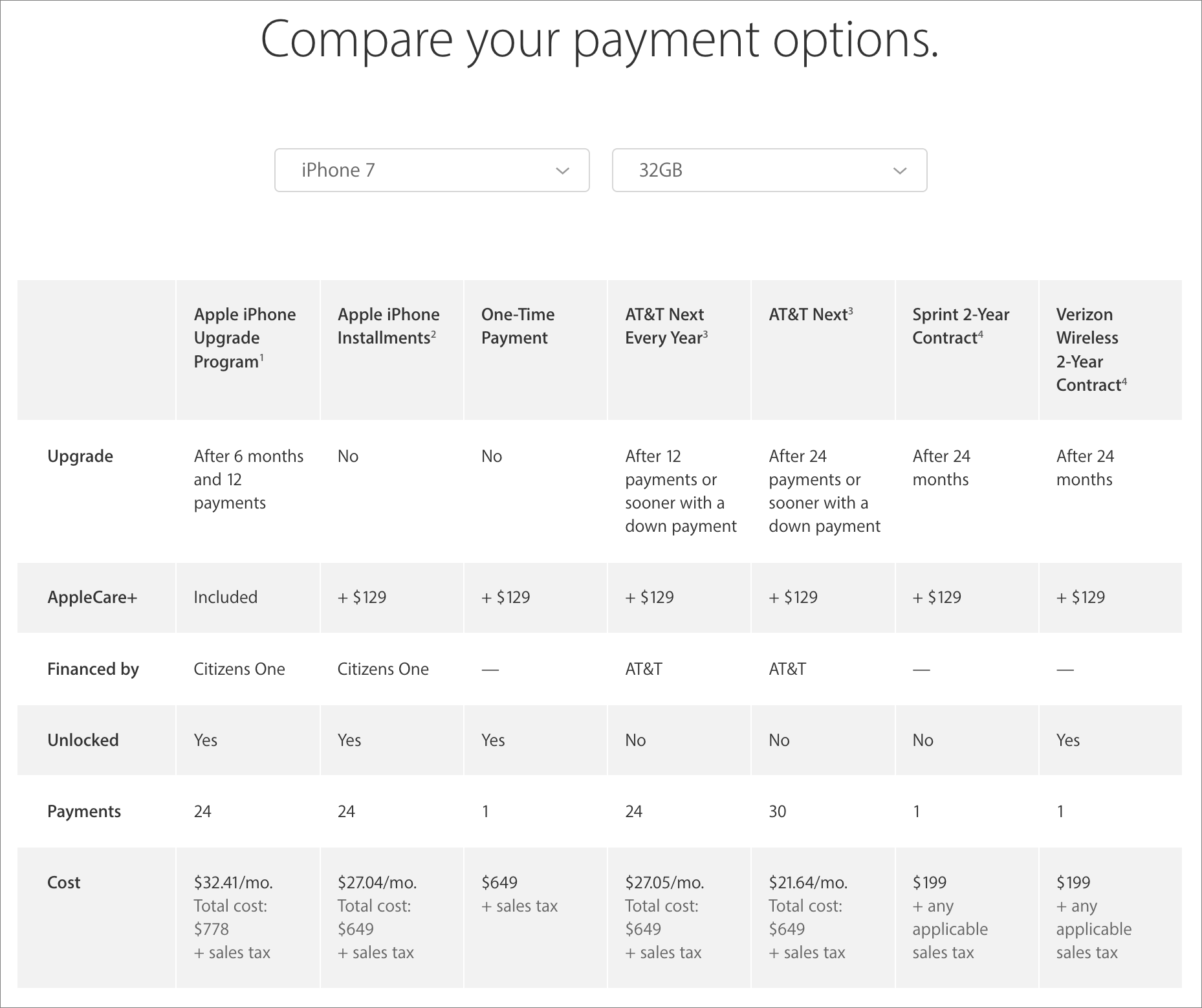 As is common for Apple, previous models remain available, so you can still buy an iPhone 6s or 6s Plus, but in doubled 32 GB and 128 GB capacities at reduced prices. The iPhone SE stays on the price list too, in 16 GB and 64 GB capacities.

As Apple always says, these are the best iPhones the company has ever made. This statement, while banal, is always true too, although we can imagine some people delaying an upgrade or purchase until they’ve had a chance to think through the implications of losing the headphone jack. Photography lovers, at least those with small hands or pockets, will also have to weigh the appeal of the dual-camera iPhone 7 Plus against its larger size. But if you’re ready for a new iPhone, the iPhone 7 and 7 Plus are tremendously appealing.

Comments About iPhone 7 and 7 Plus Say “Hit the Road, Jack.”