Carbon Copy Cloner 4.1.10 — Bombich Software issued Carbon Copy Cloner 4.1.10 (CCC), which is now officially compatible with macOS 10.12 Sierra. The backup utility works around a bug in Sierra in which FileVault could not be enabled on the destination volume, creates RSA key pairs for use with the Remote Macintosh option (to accommodate changes in Sierra), enables creating and mounting sparse bundle disk images on SMB sharepoints, and resolves issues related to updating the password for a NAS volume associated with a particular task. ($39.99 new, 12.4 MB, release notes, 10.8+)

VMware Fusion 8.5 — VMware has updated the standard and Pro editions of its virtualization package to version 8.5. The update resolves an issue that prevented a Windows virtual machine from opening an attachment in the mail application on the Mac, fixes a crash with opening an imported Parallels 11 virtual machine, and sorts out a problem with successfully dragging and dropping files between a host and a Mac OS virtual machine. The release notes also call out several known issues when running VMware Fusion in macOS 10.12 Sierra, including crashes that
occur when grabbing keyboard or mouse input from the host and a problem with using Full Screen mode when operating more than one monitor. ($79.99/$199.99 new, free update, 369 MB, release notes, 10.9+)

PDFpen and PDFpenPro 8.1 — Smile has pushed out version 8.1 of PDFpen and PDFpenPro, which adds visible snap-to guides that help you more precisely place images, shapes, text boxes, and other objects. The PDF editing apps now display an email address for a self-signed certificate (instead of the issuer), retain size-to-fit font in appearance for form fields, resolve a hang when performing a Save As for forms with required fields, work around a drag-and-drop issue in the sidebar in macOS 10.12 Sierra, and avoid converting grayscale images to RGB after opening.
($74.95/$124.95 new with a 20 percent discount for TidBITS members, $30 upgrade, free update from version 8.0, 70.3/71 MB, release notes, 10.10+)

Read/post comments about PDFpen and PDFpenPro 8.1.

Boom 2 v1.5 — Global Delight has released version 1.5 of its Boom 2 volume booster and equalizer app with a more robust equalizer and a few user interface refinements. The update introduces the Controlled Boost feature, which intelligently controls the system’s audio for optimal output while avoiding excessively high volume. Additionally, Boom 2 recalibrates audio to enhance the default speakers on your Mac with crisper sound. Earlier this year, Global Delight released Boom for iOS with features like 3D Surround Sound,
Equalizer Presets, and an Audio Intensity Slider; Global Delight has now updated it for iOS 10. ($14.99 new from Global Delight with a 25 percent discount for TidBITS members, free update, 11.7 MB, 10.10+)

BusyCal 3.0.6 — BusyMac has released BusyCal 3.0.6 with support for macOS 10.12 Sierra, along with improvements and fixes for the calendar app (see “BusyCal Updates Mac Calendar Alternative, Expands to iOS,” 1 July 2016). The update adds a menu command for choosing the starting location for travel time, fixes a bug that caused time zones to appear on Exchange events, adds an option to display a second time zone column in Week View, enables you to click URLs in the Location field, resolves an issue that prevented the Send Update button from appearing for Exchange users, and
adds an Email All Participants command to the event contextual menu. ($49.99 new, $29.99 upgrade, 11.2 MB, release notes, 10.11+)

iTunes 12.5.1 — Apple has released iTunes 12.5.1 with a redesigned Apple Music section, user interface refinements that bring a cleaner look to the app (check out the Albums and Artists views), and support for iOS 10. It also adds a couple of new features that are exclusive to macOS 10.12 Sierra, including support for using Siri to play music from your iTunes library and Picture-in-Picture, which enables you to float a resizable video window in any corner of your screen. iTunes now requires 10.9.5 Mavericks or later. (Free, 262 MB via direct download or Software Update, release
notes, 10.9.5+) 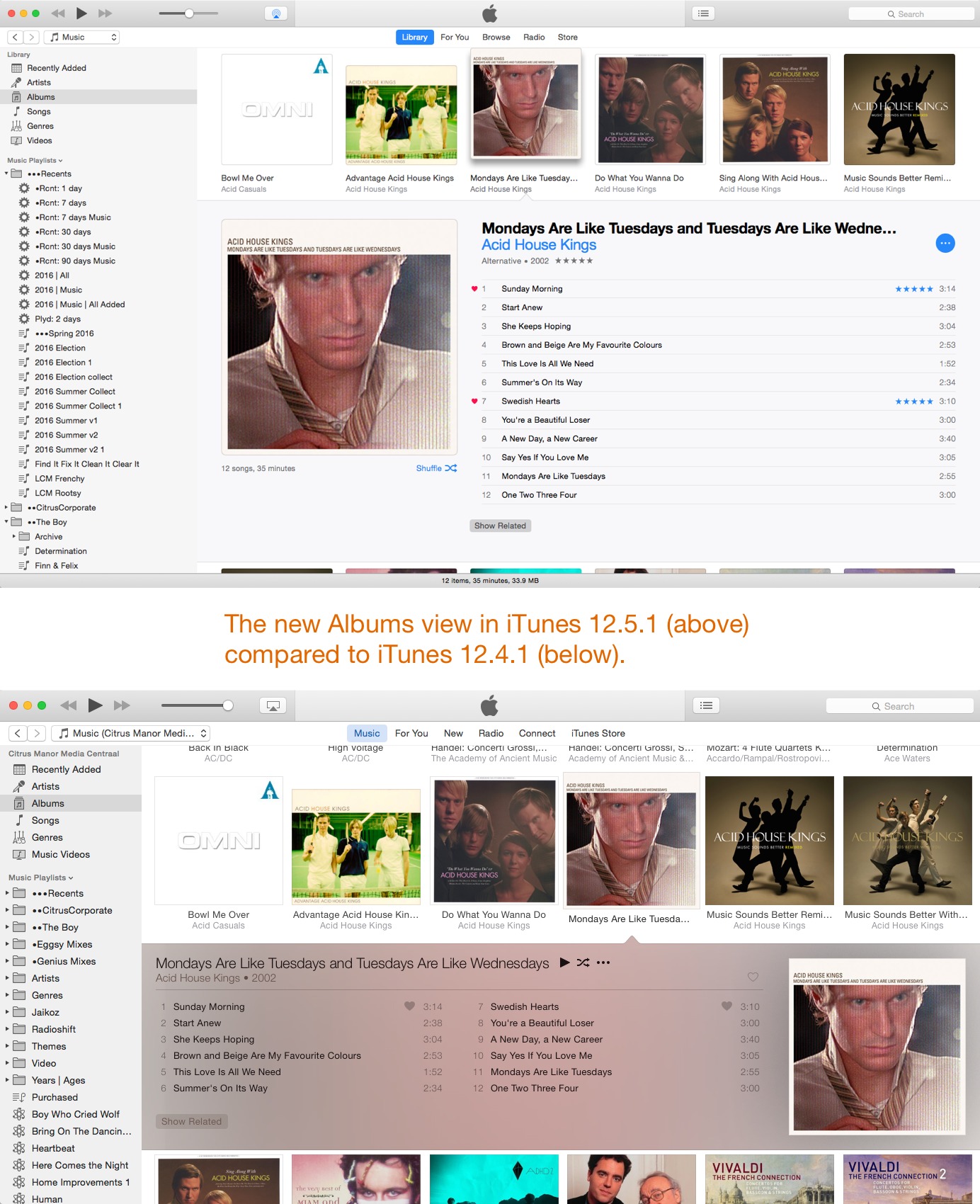