The iPhone 7 is available now and already in the hands of early adopters. But many readers have expressed concern over the lack of a headphone jack in the iPhone 7. In a post-announcement poll taken by Toluna Quicksurveys that included TidBITS-specific questions, 44 percent of respondents said the absence of a headphone jack would require them to change their habits. (For more on that, see “iPhone 7 and 7 Plus Say “Hit the Road, Jack.”,” 7 September 2016.)

Apple claims the future is wireless, even though it bundles wired Lightning EarPods with the iPhone 7. However, Apple would be more than happy to sell you a $159 pair of wireless AirPods when they debut in late October, or a pair of the new W1-equipped Beats wireless headphones. (See “W1-powered AirPods Usher in a New Era of Wireless Audio,” 7 September 2016).

Wireless headphones are nothing new, and The Wirecutter offers well-vetted suggestions for nearly every situation. For now, though, I’d like to focus on three specific use cases that new iPhone 7 users may be wondering about: converting existing headphones to wireless, affordable wireless adapters for the car, and an inexpensive solution for fitness buffs.

Make Any Headphones Wireless — By far my favorite gadget in this roundup is the Antec AMP SmartBean, a Bluetooth receiver with a headphone jack that works with any audio device that connects via a 3.5mm headphone plug, such as headphones, speakers, and car stereos. It sells for around $25 on Amazon.

The SmartBean is not much bigger than a quarter, and it’s about the weight of two quarters. It sports a clip you can use to attach it to your belt, handbag, or car visor. 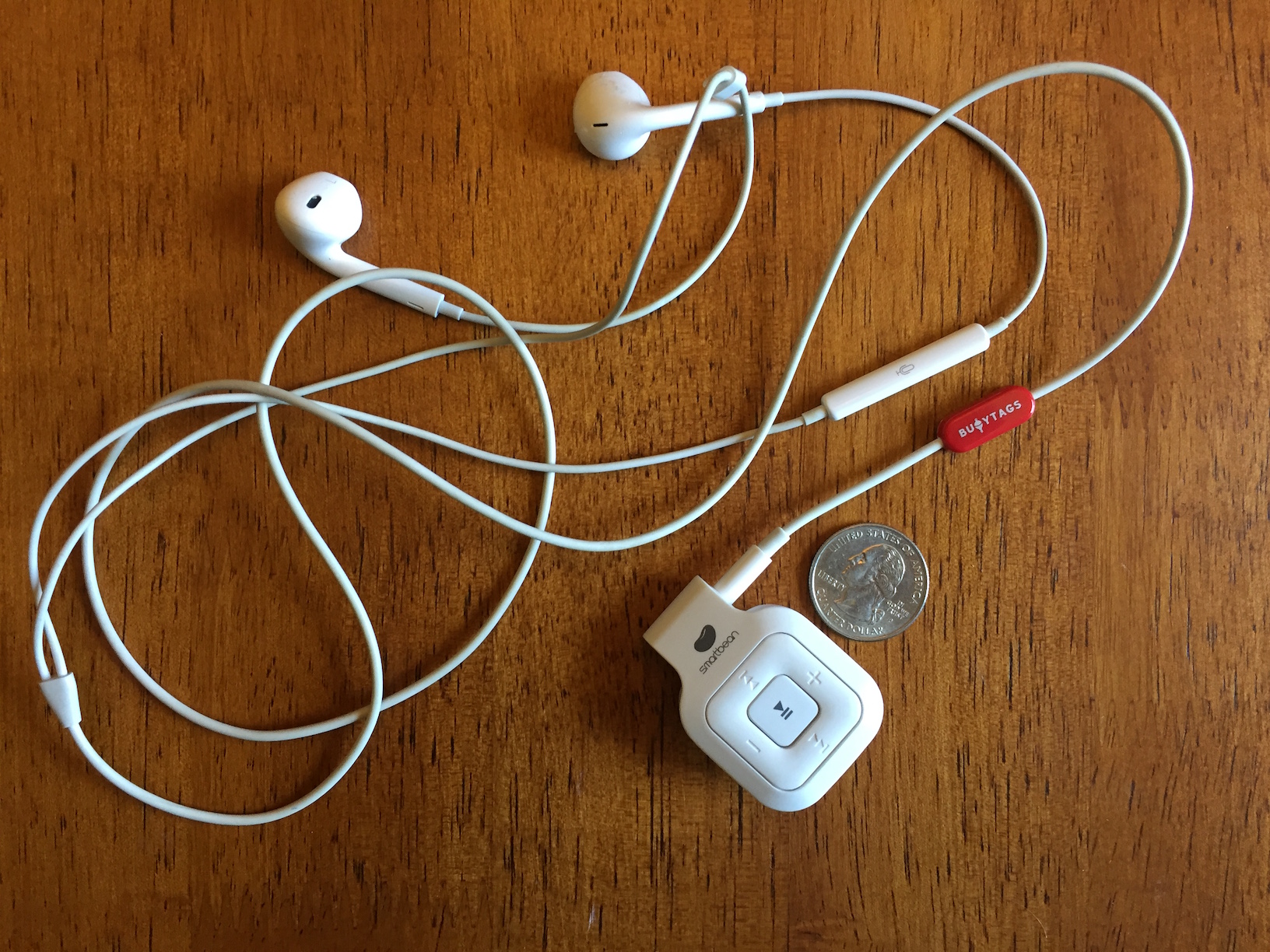 The SmartBean features a built-in lithium-ion battery, recharged via a Micro-USB connection, which lasts for 6 hours on a single charge. The reported standby time is 130 hours, so it’s easy to keep it with you at all times.

If that’s not enough battery life, you can use the SmartBean while it’s charging, but the SmartBean turns itself off when you plug it in, so you’ll have to turn it back on. It takes 2.5 hours to recharge fully.

It includes a built-in microphone for phone calls, as well as buttons for Play/Pause, volume, and Previous/Next track. However, if you keep the SmartBean on your belt, the microphone probably won’t do much good.

I didn’t test the built-in microphone, because there’s no way to initiate calls from the SmartBean. The in-line remote control on Apple’s EarPods doesn’t work with the SmartBean, and the controls on the SmartBean can’t activate Siri. Holding down the Play/Pause button on the SmartBean dials the last-dialed number, a quirk that also apparently happens on Android phones.

I tested the SmartBean with three pairs of headphones: standard Apple EarPods, the professional-grade Sony MDR-V6, and the Beats Solo 2. I switched between wired and wireless connections with these headphones and couldn’t discern a difference in audio quality.

I did hear a slight delay in audio transmission while monitoring my voice for a TidBITS podcast recording, but I didn’t notice it while listening to music or watching movies. I also used the SmartBean with my Sony MDR-V6 headphones for a couple of podcast appearances with no problems.

The SmartBean supports multipoint pairing so you can pair two devices to it at the same time. However, as with all multipoint Bluetooth devices, doing this often causes more problems than it solves, so I recommend repairing with each device with which you use the SmartBean. Thankfully, pairing is as painless as possible for a standard Bluetooth device.

Despite the usual quirks that seem to come with every Bluetooth device, the SmartBean is a valuable companion for the dawn of the wireless era.

Go Wireless in the Car — The SmartBean is a flexible solution if your car has an auxiliary input jack, but what if it doesn’t?

If your car has a tape deck, you could connect a SmartBean to a common cassette adapter, or you could opt for a solution recommended by our pal Peter Cohen: the ION Bluetooth cassette adapter, which sells for about $22. Yes, that’s right, just pop this cassette adapter into your stereo and you’ll have a wireless connection. It runs off a rechargeable battery that offers about 4 hours of battery life. I haven’t tried it myself, but it’s a neat hack. 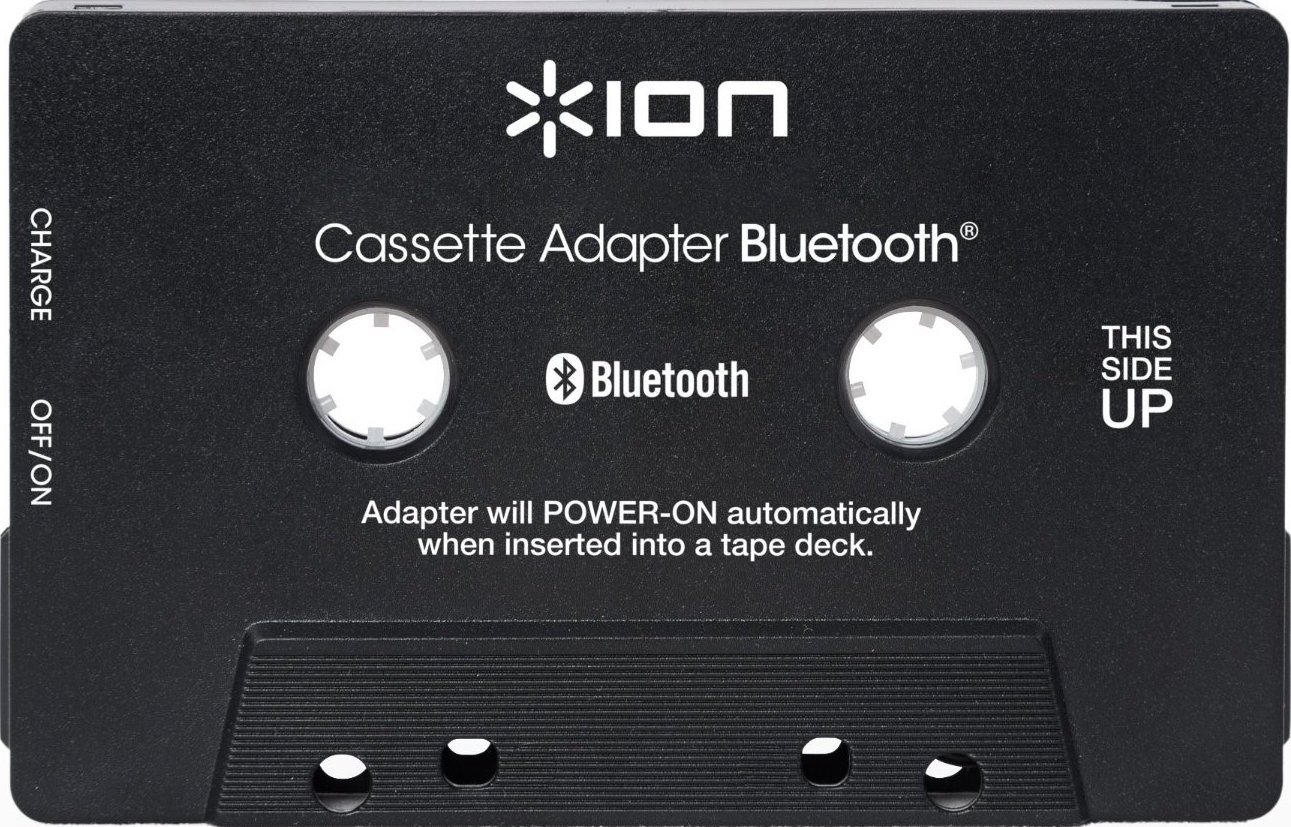 Many of us drive cars produced after the cassette era, but before auxiliary jacks and Bluetooth were standard. The easiest solution for folks like us is an FM transmitter, which hijacks a radio station to send audio to the car stereo.

I’ve owned many FM transmitters, most of which were garbage, but I like the $35 Bluetooth-enabled GOgroove FlexSMART x2 so much that I bought one for my wife’s car and one for mine. It also features an aux-in port for people whose devices do still have headphone jacks. 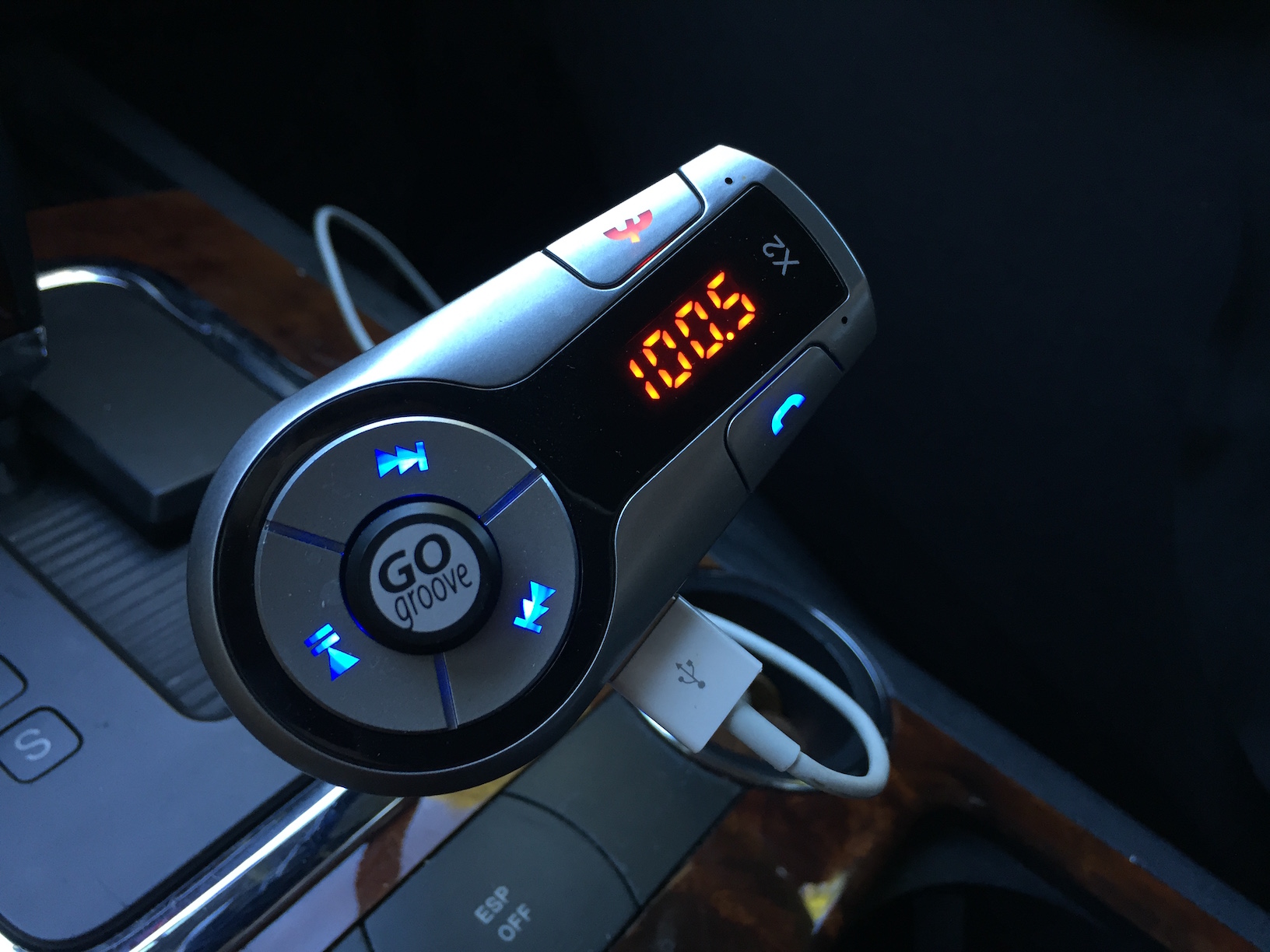 I like the GOgroove FlexSMART x2 for a variety of reasons. It plugs directly into your car’s cigarette lighter socket, so there are no batteries to worry about. The FM transmitter is powerful. Most FM transmitters suffer from interference even in unused portions of the radio spectrum, but the GOgroove FlexSMART x2 can block out even the most powerful stations in my area.

The GOgroove FlexSMART x2’s flexible neck enables it to fit in just about any car. It also features a USB charging port. Just plug in an available Lightning cable and you’re all set. (I like the Anker PowerLine+, which is Apple-certified, cheaper and more durable than Apple’s cables, and comes in many colors and lengths.)

The one potential downside of the GOgroove FlexSMART x2 is that it can’t automatically scan for open frequencies. However, I’ve never found this to be a reliable feature in other FM transmitters. You’re better off using an online tool like Radio-Locator to find an open frequency in your area.

Inexpensive Exercise Earbuds — A lot of people need music to work out and prefer wireless headphones to eliminate snagging problems. But you may not want to spend much on fancy headphones that could be smashed, lost, or stolen at the gym.

TidBITS reader Floyd Bloom first pointed me toward the SoundPeats QY7 headphones, which go for $19.99 on Amazon. However, reader Dennis Swaney suggested a cheaper alternative (I’m hesitant to say “knockoff,” because a lot of companies make QY7 headphones, and I’m not entirely sure if there even is an original) on eBay, the generic QY7 Bluetooth Headset, which sells for $9.49, including shipping. I had to try it. (From now on, when I refer to the QY7, I mean the generic pair
I bought on eBay.)

The sound quality is lousy. Listening to the QY7, you’d be forgiven for thinking that the lead singer of your favorite band had fallen down a well. However, when you’re working out, audio quality is often the least of your concerns.

Let’s look at the QY7’s virtues outside of price. They’re extremely lightweight. The battery is rated for 2–3 hours of music, 175 hours of standby, and a charge time of 2 hours. Unlike the AirPods, the two buds are connected via a wire, and the QY7 comes with several different tips and ear loops so you can adjust the fit. 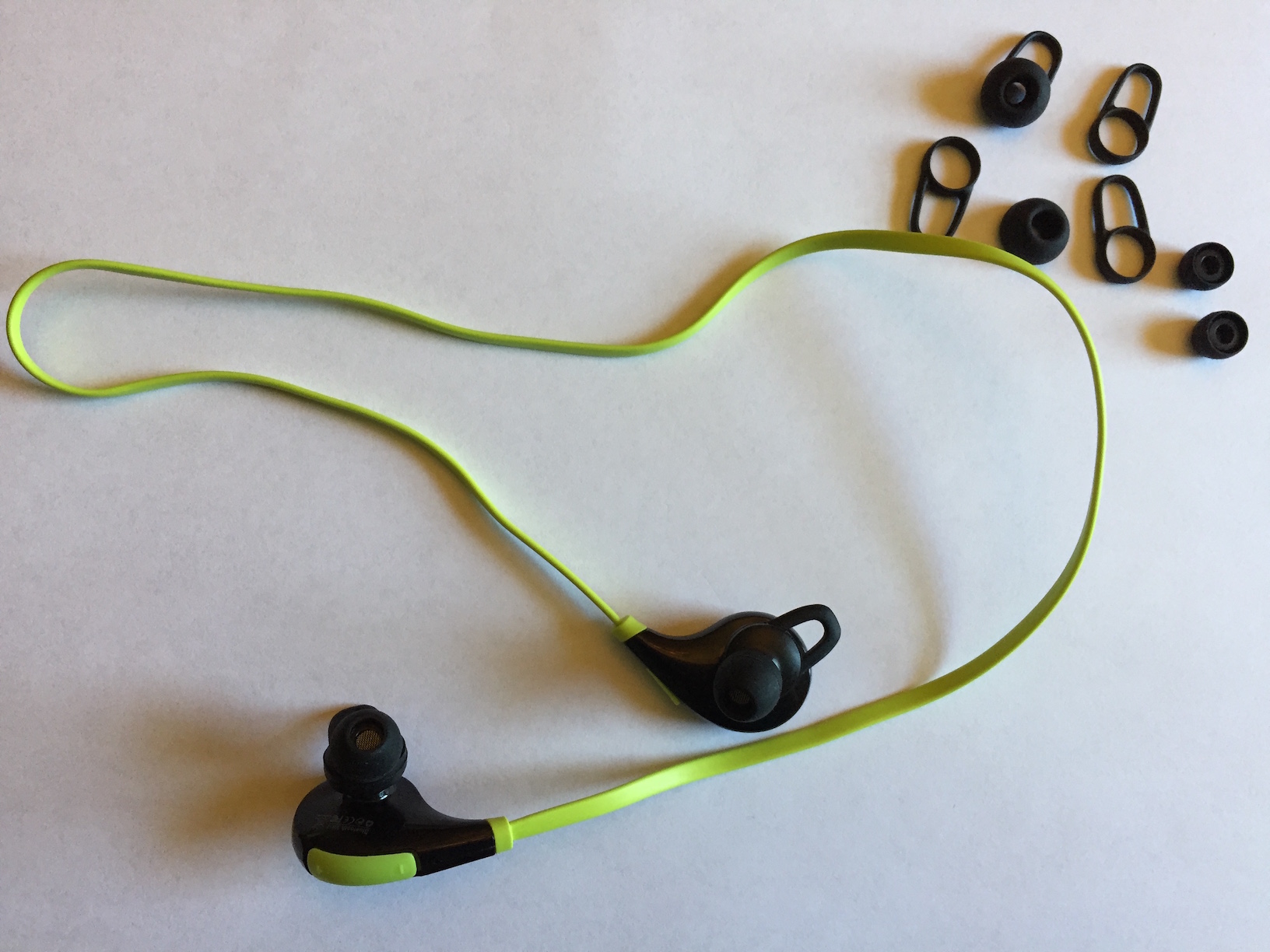 The QY7 aren’t audiophile-grade earbuds, but for less than $10, there’s minimal risk to tossing a pair in your gym bag.

We totally understand if the disappearance of the headphone jack is making you anxious, but there are good wireless solutions out there, and they don’t have to be expensive — you could buy all the products I’ve reviewed here for under $100.

Do you have a favorite Bluetooth audio device? Let us know in the comments!