It was easier to pay a friend back for lunch 17 years ago than it is now, at least if you had a Palm PDA. That’s finally changing with the release of iMessage apps that allow peer-to-peer (P2P) payments directly within Messages. Integrating payment into Apple’s iMessage service solves several of the largest problems with paying P2P: addressing a payment to a recipient and making it easy for the recipient to collect it whether or not they already have an account.

We’re still in the early days of iMessage apps, but two prominent payment apps have added iMessage integration: Square Cash and Venmo. A third, Circle, was launched on multiple platforms by entrepreneurs with deep Internet roots. Oddly, PayPal hasn’t yet updated its app to support iMessage payments, but the company often lags putting improvements in its native software.

The Shape of Payments — In 1999, PayPal — then a product of a company called Confinity, headed by one Peter Thiel — launched a personal payment system on the Palm platform. After you registered on a Web site, you could send a payment via a Palm device’s infrared transceiver. It was ahead of its time and didn’t last long.

PayPal persisted beyond in-person payments. eBay bought the company in 2002 because it drove a ton of the auction site’s transactions, but it later spun PayPal off in 2015. Until relatively recently, PayPal was the powerhouse of P2P payment, especially across national borders. When I ran an electronic periodical, The Magazine, PayPal was the only reliable and sensible way to pay contributors outside the U.S. and Canada, since it charges tiny fees and complies with banking rules in 202 countries across 25 currencies.

But challengers have risen, all trying to score a piece of a roughly trillion-dollar-a-year global market for moving money between individuals — almost $600 billion of that is in money sent home by foreign workers alone. Before these new companies appeared, most of PayPal’s putative competitors charged fees to move money around, and those fees could be significant when shifting cash across national boundaries. PayPal charges nothing for most personal transactions within or between the U.S. and Canada using a PayPal balance or withdrawing from a bank account, and collects from 0.3 to 3.9
percent for transactions crossing other international borders, sometimes with an additional fixed surcharge. The upstarts typically operate only in the United States, and emulate PayPal in having no fees for personal transfers. Circle is so far unique in also including UK residents in its system.

These P2P payment systems are distinct from business-focused credit-card processors, like Stripe (for apps and Web sites), Square (for in-person retail transactions), and dozens of others. Credit-card processors enable merchants to participate in the global payments network; they charge about 3 percent of every transaction, plus another 30 cents when it’s not face-to-face. Anyone can get a Stripe or Square account, but then you’re subject to all the limits and rules present in those systems. (Square operates both credit-card services and P2P payment services as separate parts of the same business: the former is just Square; the latter, Square Cash. Each requires a separate account.)

These new P2P payment services face a challenge relative to credit cards and PayPal: signing up enough people that they become a preferred alternative to other payment methods. Once they have substantial user bases, they can then tap into the small-business retail market and eventually expand to work with big businesses, which are more lucrative arenas. In such a scenario, the P2P service would charge the merchant around 3 percent of the transaction. That’s comparable to credit-card fees, but these P2P services have fewer restrictions and are easier for merchants to work with. Plus, these debit-based P2P services may appeal to people who never use credit cards.

Some payment outfits have tried to solve the problem of acquiring a lot of users by paying bounties. Venmo used to offer $5 for new account signups to both the referrer and the new user, and Square once offered $10 each way and still offers $5. That’s expensive, but necessary to build a network. That’s where iMessage apps can help.

Chicken, Meet Egg, or Vice-Versa — If someone tries to send you money with one of these systems and you don’t have an account, you get an invitation and instructions on how to sign up to receive the money. An email or text message explaining how to give up personal financial details may seem dubious, even if you know it’s coming. A few years ago, I tried to pay a friend via a service offered by my credit union that would deposit money into the recipient’s bank account. But between the weird message sent by the service and my friend not wanting to give her banking details to a random site, we chose a different method.

These new P2P payment services are easier and more familiar than my credit union’s system, but there’s still friction. iMessage integration breaks through the chicken-and-egg problem. When you receive a payment notice via iMessage:

Before we get started with the experience, let’s go over the limits and costs for personal use of the three services we tested: Circle, Square Cash, and Venmo. (Is Circle’s name a joke on Square? We don’t know, but Circle obtained circle.com, while Square uses squareup.com for its main site and cash.me for Square Cash.)

All of these services keep a balance for you, like a savings account. You have the option with each to transfer your balance out to a linked account that accepts deposits or credits, which can happen automatically (called “sweeping”) or on request. Here are the details:

Show Me the Money! — With each of the services, you can set up an account either via the service’s app or associated Web site, but you need the app installed and logged-in to proceed.

Once it’s installed, you must activate it in Messages to send payments. This works the same as any other iMessage app:

TidBITS Managing Editor Josh Centers and I tried Circle, Square Cash, and Venmo. Circle and Square are both straightforward, showing a field in which you can swipe to select payment amounts and, with Circle, one of the supported currencies. Circle lets you send any amount by penny increments, down to $0.01, and then tap Send. Square Cash focuses on whole dollar amounts — you have to tap an App button to pay to the penny, which is odd, since I expect many people will use this feature to split bar and restaurant bills. Tap Pay to send the payment.

Unfortunately, Venmo hasn’t optimized its iMessage app to the small screen size. You have to tap one of two buttons, Request or Pay, both of which result in the same full-screen view. Tap the down arrow at the upper right to reduce the view, and Venmo stops working until you tap the up arrow to zoom it full screen again. The company needs to make a more Messages-appropriate view, rather than shoehorning its full app approach into that space.

Venmo also has the strange notion that small payments you make should be public record by default — that’s right, Venmo posts the participants and the amount of the transaction to a public stream. I have no idea why this would be desirable. Maybe to prove to others that you’re honorable? You can avoid this oddity — in the Pay view, if the tiny link above the Pay button says Public or Friends, tap it to switch to Participants Only. 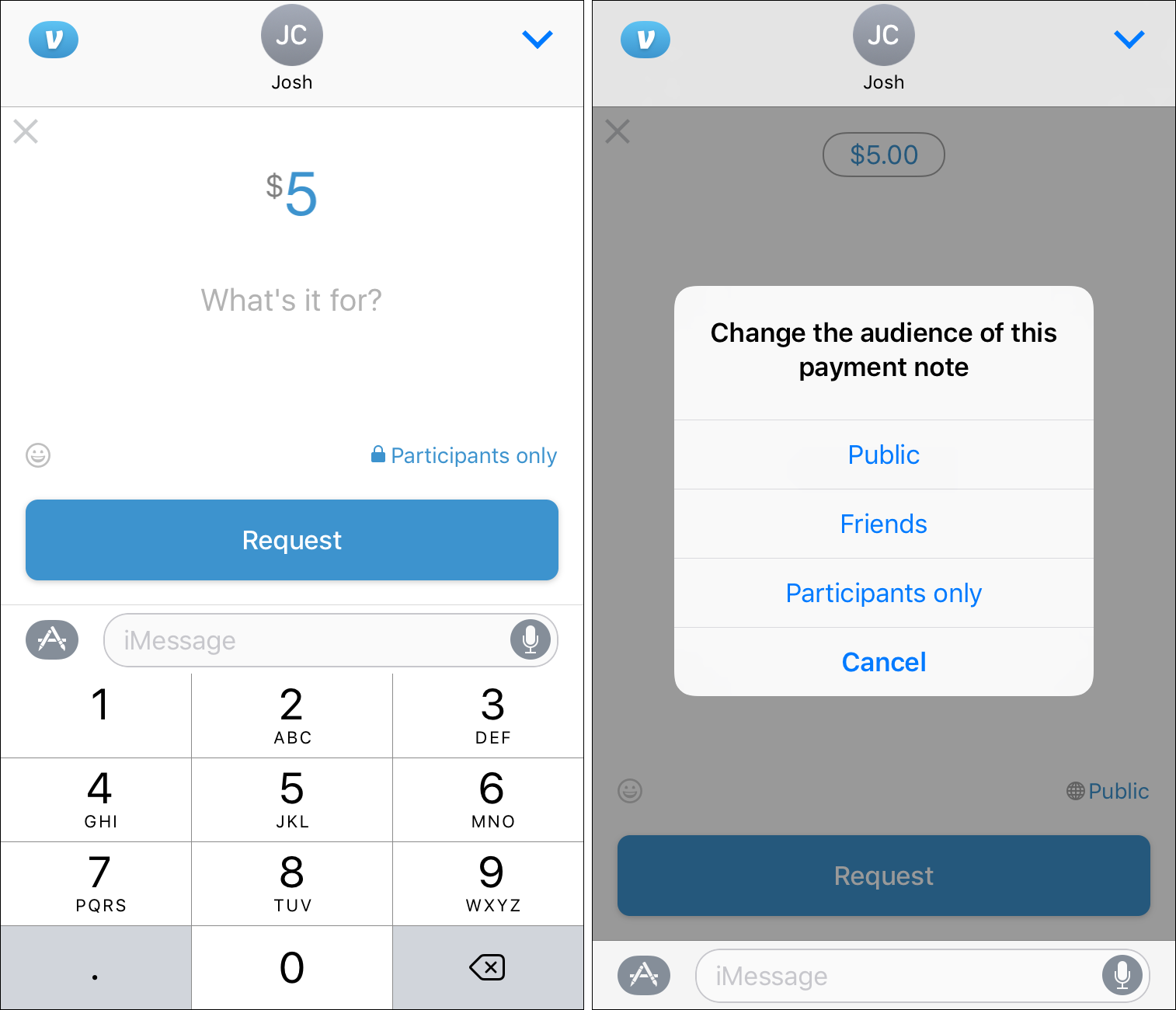 A recipient of any of these three payment messages gets the nice capsule view designed by the app maker: Circle is jaunty, Square bland, and Venmo boring. The receiver taps the part of the lozenge that explains they need to tap, and this launches the app, if it’s installed, or takes that person to the App Store to retrieve it. 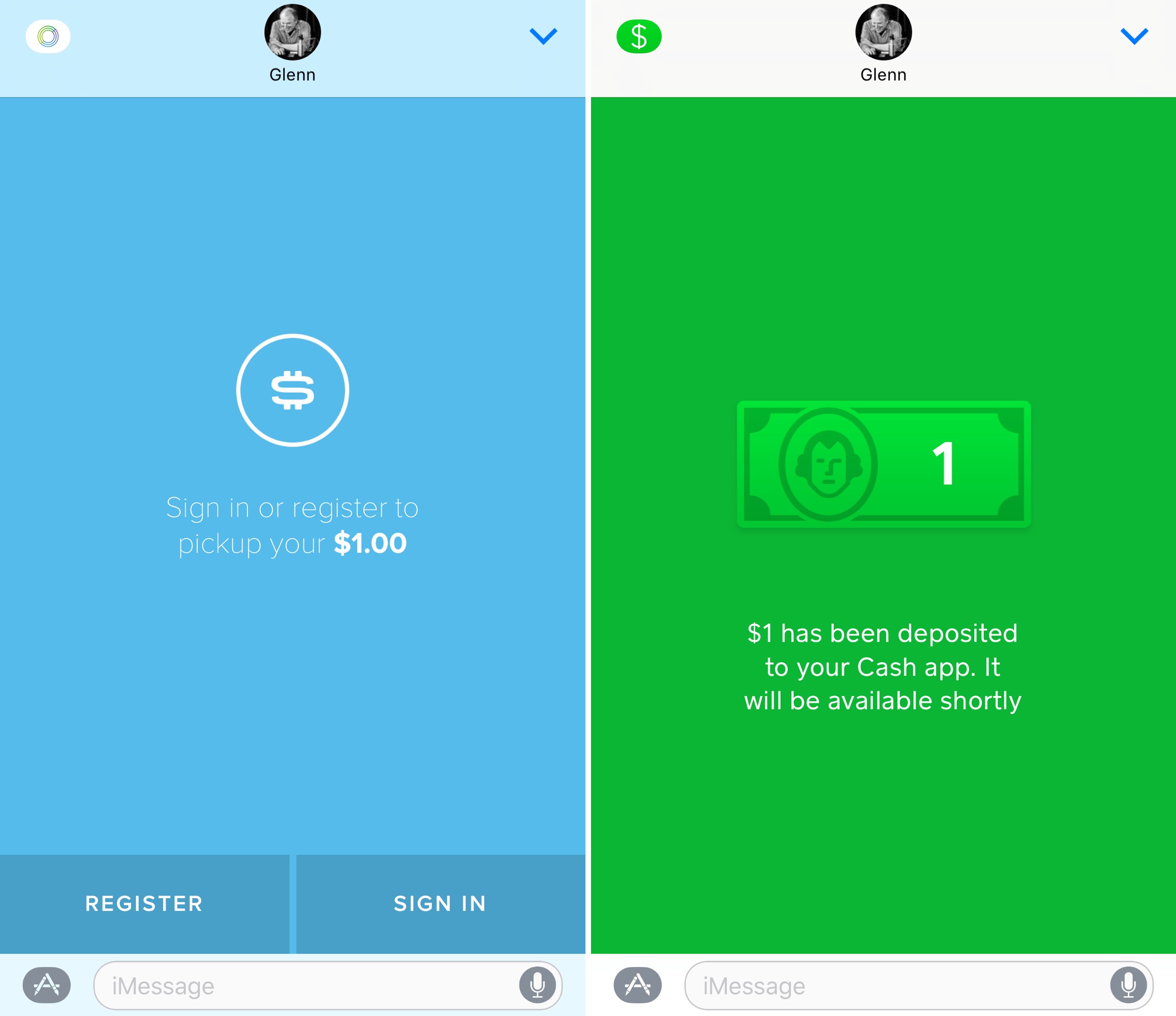 All three systems worked well. I had already set up Square Cash and Venmo, and added Circle weeks ago. Josh had to set up Venmo and Circle and had no problems. Venmo is more awkward than the others, but it has been popular for years, so you may have more friends and colleagues already using it.

You can theoretically use Square Cash and Venmo with Siri, by saying something like, “Send $1 to Josh Centers using Square Cash.” (You must first enable each app for use with Siri via Settings > Siri > App Support. Circle doesn’t yet work with Siri.) In my testing, Siri couldn’t do this. With Square Cash, it said I had to open the app. With Venmo, it just said it couldn’t. You can also say, “Send $1 to Josh Centers” and Siri will prompt you with eligible apps. Josh had no problems sending money via Siri, so perhaps there’s something wonky with my iPhone.

Do These Services Solve a Problem? — I’ve hoped for the return of the Palm’s PayPal-style system for years. I long resented PayPal, because of how difficult and poorly maintained it was, in addition to the terrible way it treated merchants. But since eBay spun it out, PayPal’s Web site has improved, and the horror stories have abated, so I was surprised when PayPal didn’t leap into Messages on day one. Given its enormous user base, it will be interesting to see what the company eventually offers.

Square Cash has been my top pick for personal payments since it launched, and I’ve used Venmo willingly when I’ve needed to work with people who had committed themselves to that system. Circle is a new entry, but its multi-currency approach and desire to expand beyond the U.S. and UK make it an interesting option for people working and playing across borders.

Having these payment apps inside Messages simplifies making person-to-person payments, because you don’t have to look up recipient addresses or explain to people how to receive cash. They also make it easier to be notified of and receive payments than it was in the days of standalone apps or (horrors!) email notifications and Web-focused systems. Next time you need to split a restaurant tab with a friend, give one of them a try!

Comments About Circle, Square, and Venmo: Payment Apps Let You Pay via iMessage