I used to think Apple Watch docks were pointless, but after reading Julio Ojeda-Zapata’s dock roundup (see “Eight Apple Watch Stands That Stand Out,” 5 August 2015), I decided to try an inexpensive one, settling on the $9.99 Orzly Compact Stand.

That cheap little stand was an eye-opener. By putting the charger in a fixed position, I was able to tuck the Apple Watch’s absurdly long charging cable behind the nightstand. It made charging easier too, since I just had to set my Apple Watch on the dock at night. Also, I no longer had to worry about my watch sliding around my nightstand, the charger coming loose, or the watch falling off the nightstand. It was $10 well spent.

I wasn’t looking for an upgrade, but when I saw the Material Dock by Studio Neat, I immediately wanted one. I’ve long admired the company’s products, but the Material Dock is the first that solves a real problem for me, by docking both an iPhone and an Apple Watch. It’s not the first dock to handle both, but it’s the first I’ve seen that deals with both in a sensible fashion by placing the watch edge-down in front of the iPhone. This way, you can use the watch in Nightstand mode while also being able to see most of the iPhone screen. It’s also adjustable to accommodate different iPhone sizes, even those in cases.

On the downside, the Material Dock’s design makes controlling the iPhone more difficult while it’s on the stand — activating Control Center is difficult, though higher screen elements are still easy to reach. This design also makes turning off alarms tricky, since the Stop button appears at the very bottom of the iPhone’s screen. Personally, I find this to be a fringe benefit, since requiring a little more effort reduces the chance I’ll go back to sleep. However, the Snooze button is easy enough to reach, and you could always set alarms on your Apple Watch instead.

The Material Dock comes in two variants: an iPhone-only model for $45 and the combined iPhone and Apple Watch dock for $70. Studio Neat provided me with a review unit of the latter.

The quality of the materials and construction account for the price. The base is made of solid walnut, and the bumpers are cork. You must supply your own charging cables, which you install yourself and route through channels milled in the bottom of the base.

That’s right, as with the Twelve South HiRise stand for iPhone (see “A Game of Docks: Apple Versus Twelve South,” 25 September 2013), some assembly is required. This annoyed me three years ago when I reviewed the HiRise, but I’ve since wised up to the virtues of “hobby kit” stands: they can be adjusted to fit any size iPhone and case, and you can replace the cables if something goes on the fritz.

Assembling the Material Dock took less than 10 minutes, even with some fumbling on my part. You need a screwdriver, but the package includes a rather nice one. 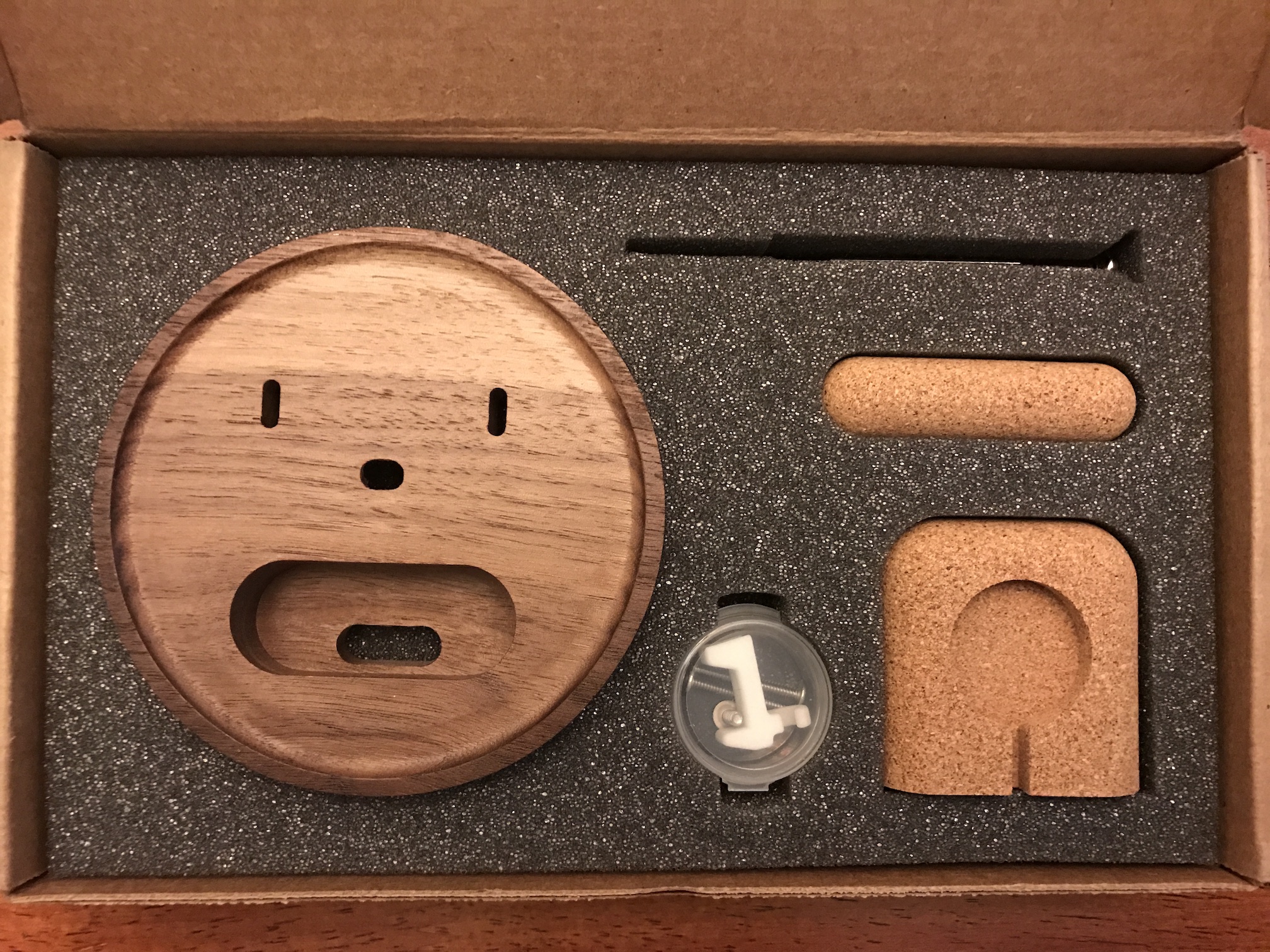 The Material Dock requires an official Apple Lightning cable. Unfortunately, I don’t have many of those with their insulation intact. I decided to put a worn-out, yet functional cable in the Material Dock, figuring that if the cable survived the installation process, it would then be stationary and not suffer more damage. So far, that’s been a smart choice, and saved an otherwise unusable cable. 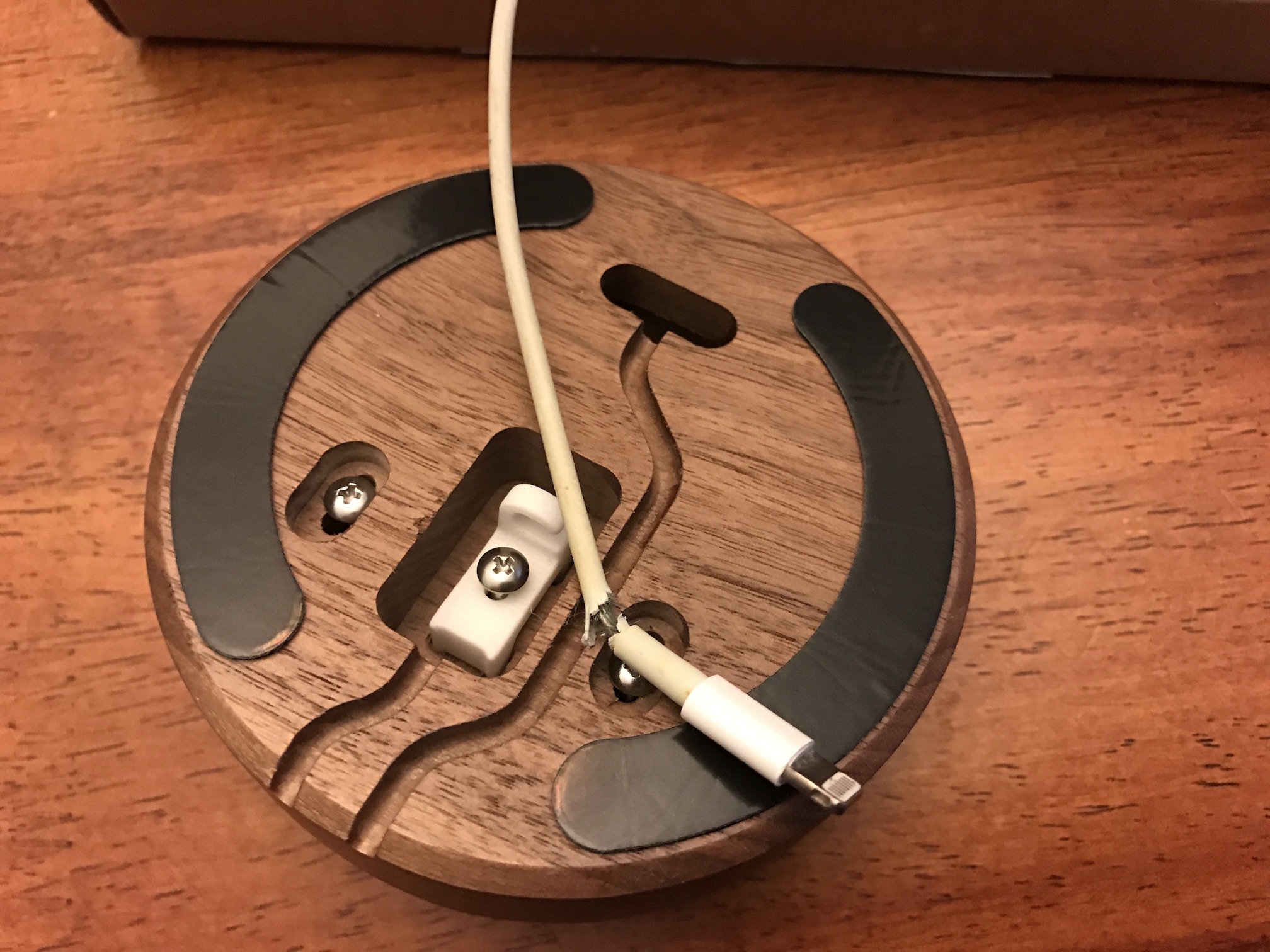 Studio Neat’s directions are pretty clear, and most of the assembly is common sense, but I’ll add a few tips: 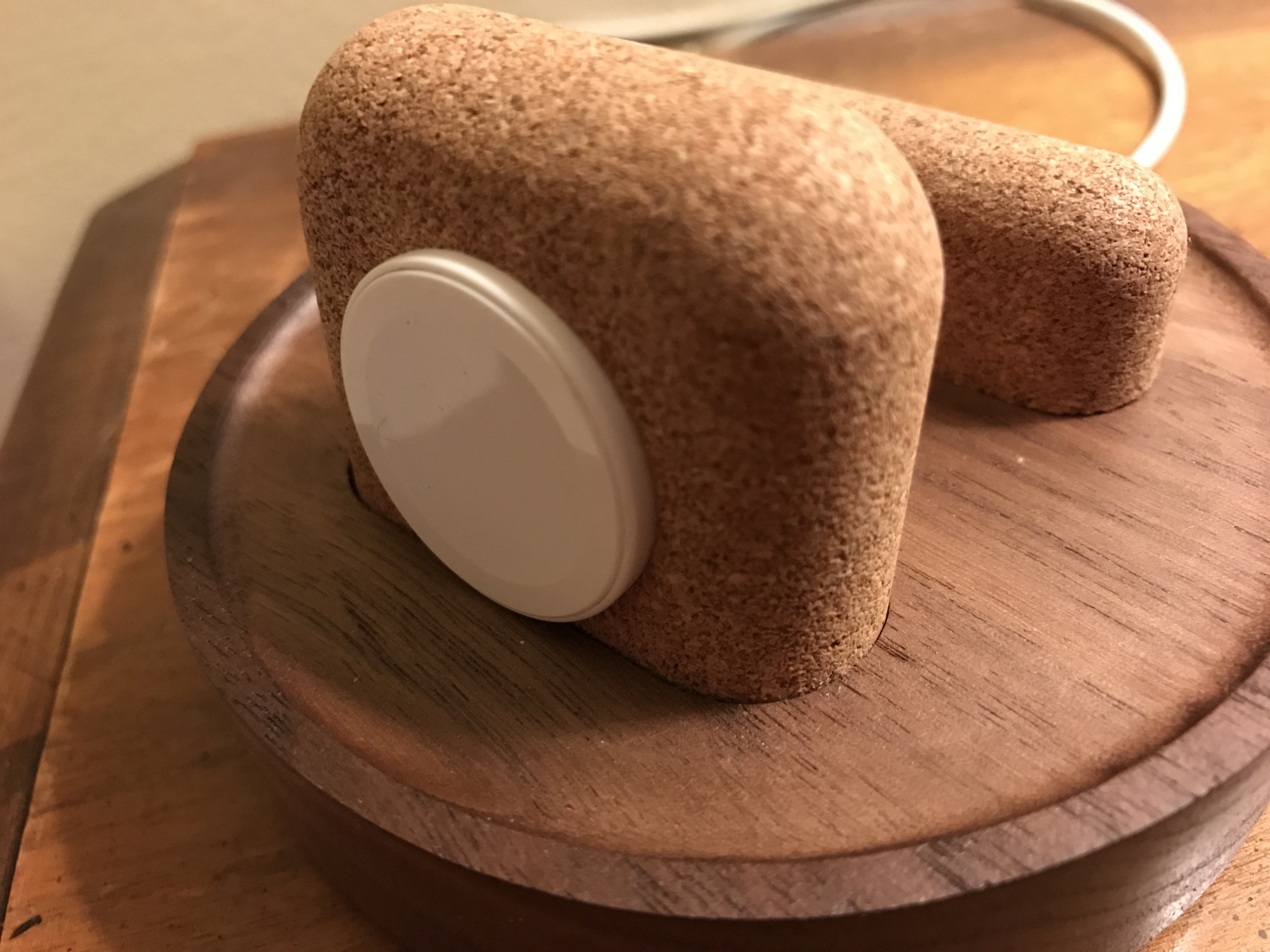 Once you’ve assembled the unit, it’s time to put it in its semi-permanent resting place. The sticky pads on the bottom come covered in plastic, which you can easily remove with a piece of tape.

My advice is to play with the dock’s location before removing that plastic, because once you set it in place, it sticks well. The sticky pads have a micro-suction surface — little sponge-like holes that act like hundreds of little suction cups.

The Material Dock perhaps sticks a little too well. I had to remove it to make some adjustments, and it took some of my nightstand’s finish with it! My nightstand is kind of beat up anyway, but you might not want to place the Material Dock on any family heirlooms. 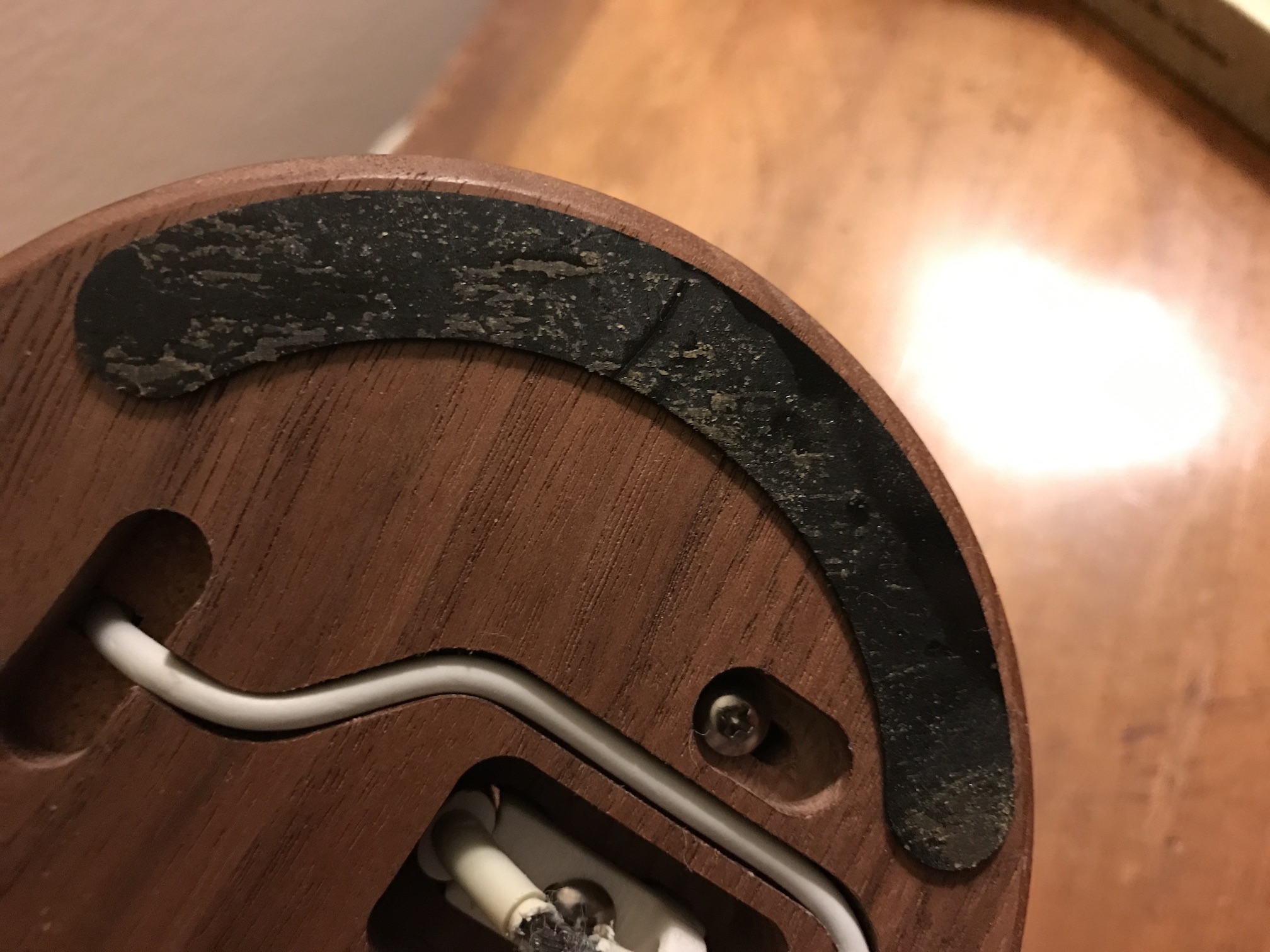 If you get gunk on the sticky pads, like your nightstand’s finish, you can wash it off with soap and water. However, that’s a little trickier than I’m making it sound because you first need to remove all of the cables. Plus, the micro-suction surface soaks up soap and water, making it hard to get them totally clean. Some tips:

Once clean and dry, the pads should be as sticky as they were out of the box. The upside of this mega-suction is that you can easily lift your iPhone from the dock without placing any downward pressure on the dock itself. Simply lift the iPhone, tugging as hard as necessary.

Placing your devices on the Material Dock requires a little more care than removing them. As I mentioned above, getting the Apple Watch puck placement right is key. Otherwise, it will ding at you all night as it connects and disconnects — that’s as much the fault of the weak magnet in the puck as the dock. The other difficulty involves setting the iPhone in place, since the Lightning connector is so small. It’s easy to do in a well-lit room, but more difficult when the lights are out.

Despite these quirks, I like the Material Dock. It’s handsome, it stores my iPhone 7 Plus and Apple Watch tidily, and Studio Neat was quick to respond to my questions and concerns. If you want a premium wooden dock for your Apple Watch and iPhone, the Material Dock is worth a look.

Apple Watch iPhone, iPad, & iOS
Cookies & Privacy: We wish we were talking about chocolate-chip cookies here, but our Web site—like nearly all others—relies on a few minor digital cookies. Various laws around the world require us to tell you that fact, so consider yourself informed, if not nourished. By continuing to use this site, you agree to our use of these cookies. Cookie and Privacy Notice