As with a previous such event (see “Google I/O 2016 Includes Announcements with Apple Appeal,” 23 May 2016), much of what Google showed off has direct parallels with the Apple world. Notably, both companies showed off their next-generation smartphones.

But while the Google event might seem like a me-too exercise with an undercurrent of Apple envy, it demonstrated how Google is outpacing its Cupertino competitor in some ways. Google’s new Pixel smartphones don’t blow the new iPhone 7 models out of the water, but they do have characteristics that might inspire some envy. And Google is pulling ahead of Apple in areas such as Wi-Fi and virtual reality. None of Google’s improvements are so significant that Apple users will be enticed to switch, but the competition should keep Apple on its toes.

iPhone, Meet Pixel — Google has jettisoned the Nexus brand that it long used for the smartphones it sells directly to the public, shifting to Pixel — the name it previously used for its Pixel C tablet and the recently discontinued Chromebook Pixel laptop. Google’s new phones bear the monikers Pixel and Pixel XL. 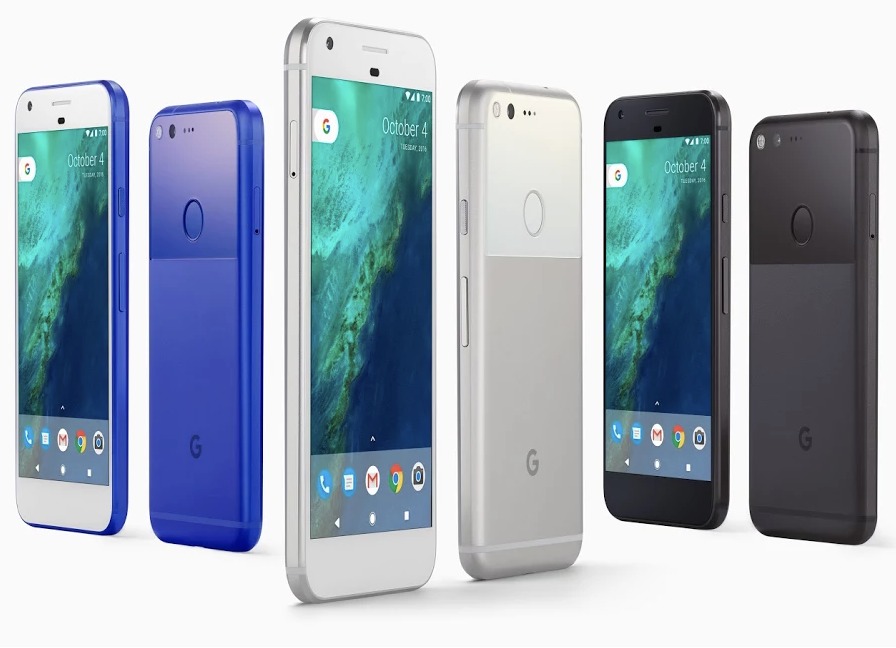 Aesthetically, the Pixel devices might strike many as iPhone copycats with roughly comparable contours, though Google has opted to sheathe the aluminum devices front and back in glass — we all know how well that worked out for the iPhone 4 and 4s. Google does earn a few creativity points for the names of its phone colors: Very Silver, Quite Black, and the limited-edition Really Blue.

More significantly, Google has added a raft of technical improvements to make the Pixel phones competitive with both the iPhone 7 and high-end phones from other Android-based phone makers.

The Pixel’s 12-megapixel camera is one of the biggest shots across Apple’s bow. Google made much of the fact that the camera does not bulge the way the iPhone 7’s camera does, although the Pixel is slightly thicker overall than the iPhone 7.

Even so, Google claims the camera is “the highest rated smartphone camera anyone has ever made” with a DxOMark Mobile score of 89, along with exceptional low-light performance (an iPhone 7 bragging point) and a Lens Blur feature to achieve shallow depth of field and bokeh effects (similar to the iPhone’s new Portrait feature). But the Pixels lack one key camera feature: optical image stabilization, that’s found on both iPhone 7 models. For comparison, the iPhone 7 scored 86 on the DxOMark Mobile test.

iPhone users may feel pangs of jealousy at Google’s offer of free, unlimited storage of original-quality, full-resolution photos and videos via its Google Photos service. Apple’s iCloud still offers just a measly 5 GB of free storage for use with iCloud Photo Library.

Quick-charging technology gives the Pixel phones another edge over the iPhone 7. The Google handsets can go from uncharged to about 7 hours of battery life with only 15 minutes of charging via an 18-watt charger plugged into a USB-C port and a technology called USB-PD (Power Direct). Apple could presumably bring quick-charging technology to the iPhone since the 12.9-inch iPad Pro already has rapid charging (see “iPad Pro Charges Faster with MacBook Adapter and New Cable,” 27 April 2016).

Google has kept its fingerprint sensor on the back of its handsets, and not on the front like iPhones. The goal is to allow users to pick up and authenticate in one fell swoop, though that’s easy to do on the iPhone as well.

The Pixel phones are, behind the scenes, a significant Google strategy shift since the company had previously partnered with third-party hardware makers for its Nexus phones. Now, it says, it is “bringing hardware and software design under one roof,” although it’s still outsourcing the actual manufacturing. Sound familiar?

Google at Your Service — The Pixels are also the first Android smartphones to incorporate the intelligent new Google Assistant (see “Google I/O 2016 Includes Announcements with Apple Appeal,” 23 May 2016), which is roughly comparable to Apple’s Siri and Amazon’s Alexa.

As also revealed last May, Google Assistant is also the core of the new Google Home voice-activated hardware that competes directly with Amazon’s Echo device and has — to the dismay of some — no direct Apple equivalent. Google Home will, though, work with both iOS and Android devices. 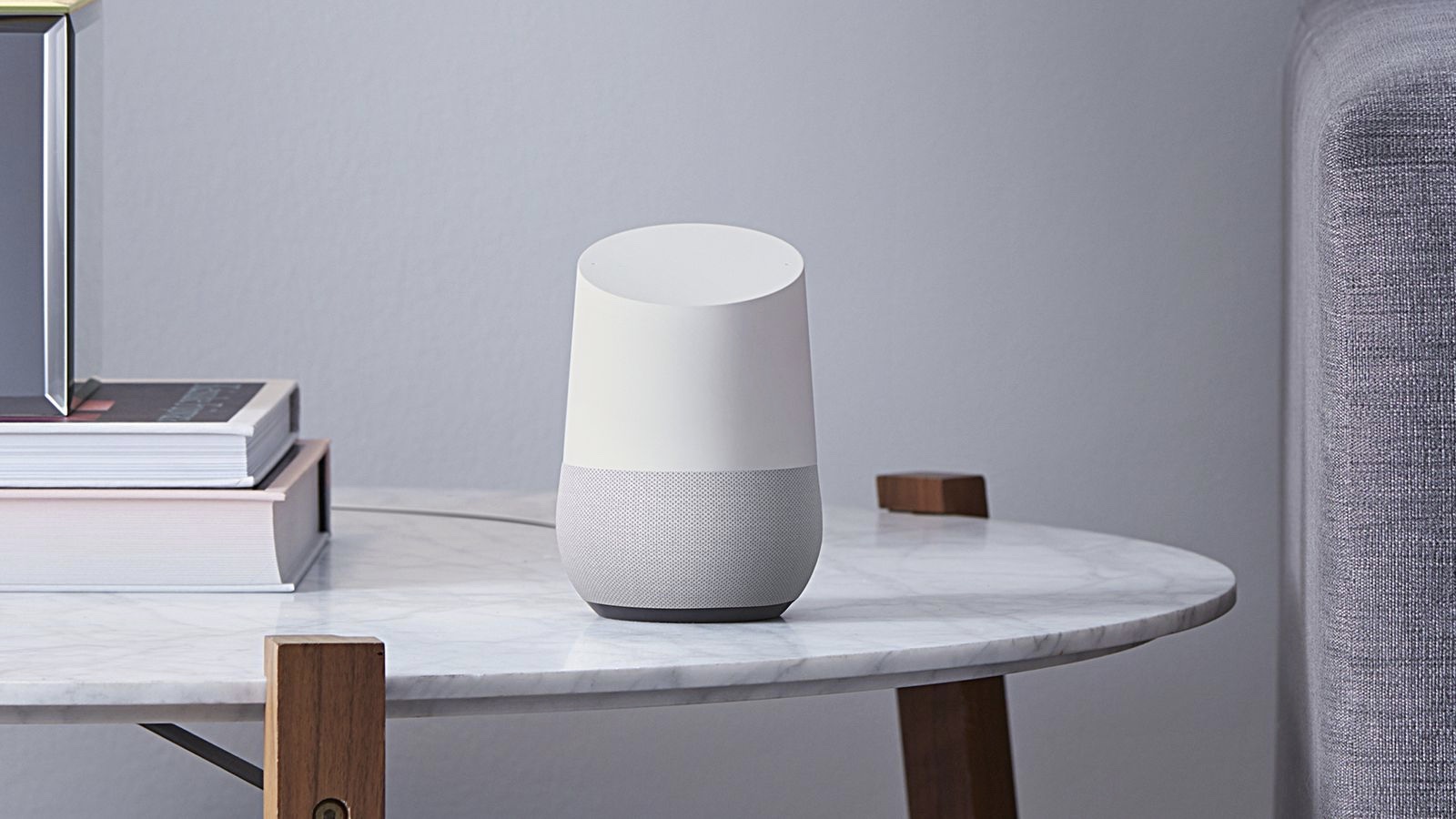 Google had no major new revelations about Google Assistant and Google Home, except to say the latter will ship in November 2016 and start at $129 with a white top and gray fabric-covered base. More color schemes are on the way to match different home decor.

Virtual Reality, Step Two — Google has for several years done a good job promoting the emergent virtual-reality technology via its Cardboard goggles (see “On the iPhone, Virtual Reality Is Unofficially Real,” 17 June 2016). The slew of available Cardboard versions from Google and third-party makers tend to be simple by design in order to remain affordable.

But now Google is starting a fresh chapter in its virtual-reality crusade with second-generation goggles called Daydream View. For now, the Daydream View is fully compatible only with the Pixel handsets. Compatibility with other Android phones is coming, but Google didn’t comment on future iPhone compatibility. 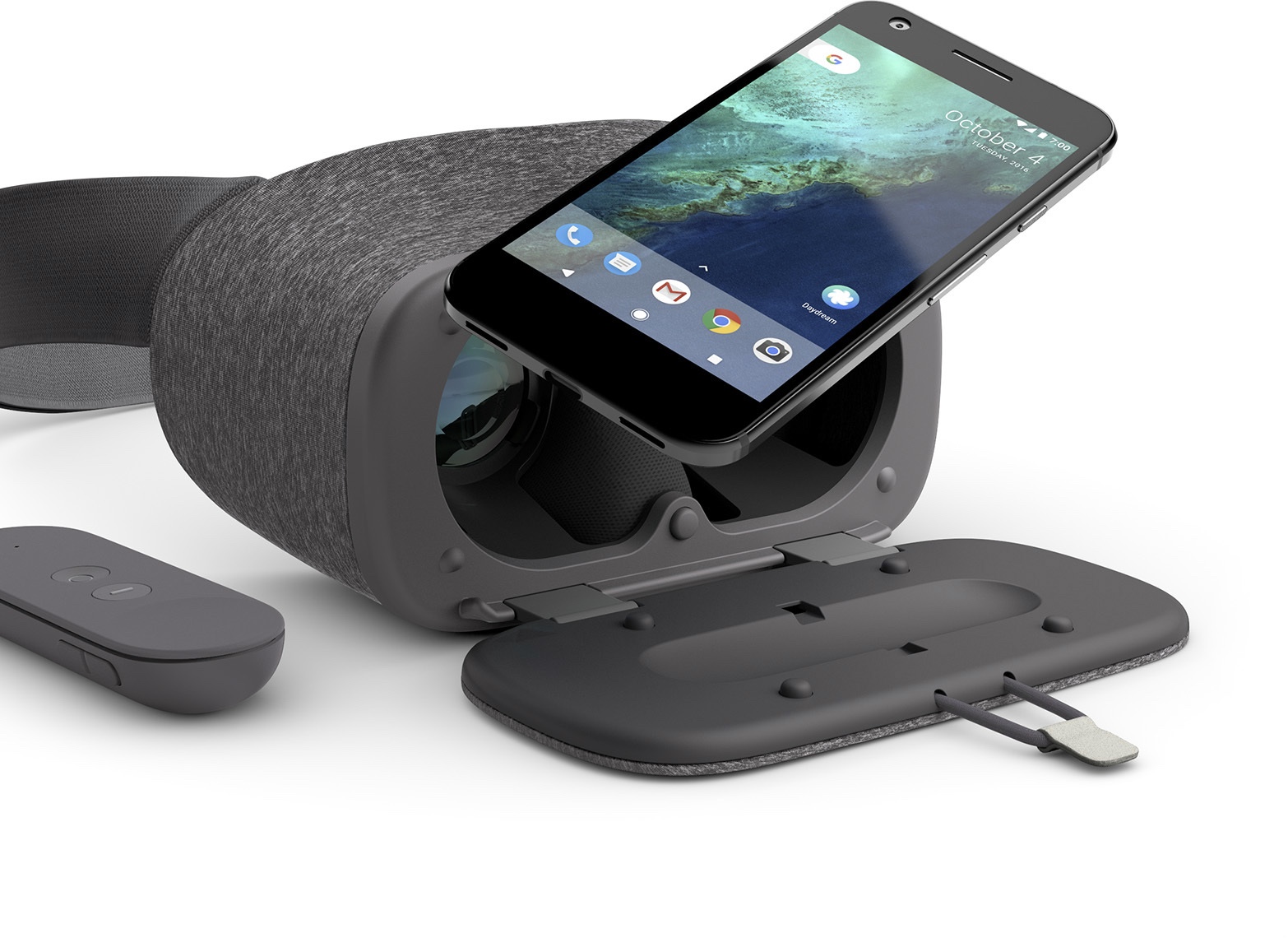 Physically, a smartphone fits into the Daydream View’s flip-down lid, which you then close to make the phone into the VR brains and viewer once you put the goggles on your head. The Daydream View and Pixel pair automatically — similar to how Apple’s AirPods will pair with Macs and iOS devices.

The Daydream View adds a new element: a small handheld controller vaguely reminiscent of Apple’s pre-Siri Apple TV remote that enables a degree of interactivity. Google notes that the new controller “points where you point and is packed with sensors to understand your movements and gestures. You can swing it like a bat, or wave it like a wand. And it’s so precise that you can draw with it.”

When not in use, the controller stores on the inside of the Daydream View’s flip-out lid. Now, why didn’t Apple think of something like this for its easy-to-misplace Pencil?

One popular approach revolves around selling access points in sets of three or more to improve coverage (via what is called a “mesh network” in some cases). Eero has made a name for itself with such a system (see “Eero Provides Good Wi-Fi Coverage in a Handsome Package,” 25 June 2016).

Google is now getting into this game with a device called Google Wifi that will be sold in multiples, unlike the company’s older OnHub Wi-Fi router (see “Google OnHub Router Aims to Simplify Wi-Fi for Everyone,” 19 August 2015, and “Google’s OnHub Router Gets Rough Treatment in Early Reviews,” 31 August 2015).

The gadgets, which are short, white cylinders with wraparound light rings, create a residence-wide mesh network. According to Google, they are simple to set up, have robust privacy features, and auto-adjust to optimize performance — these are all Eero claims to fame. 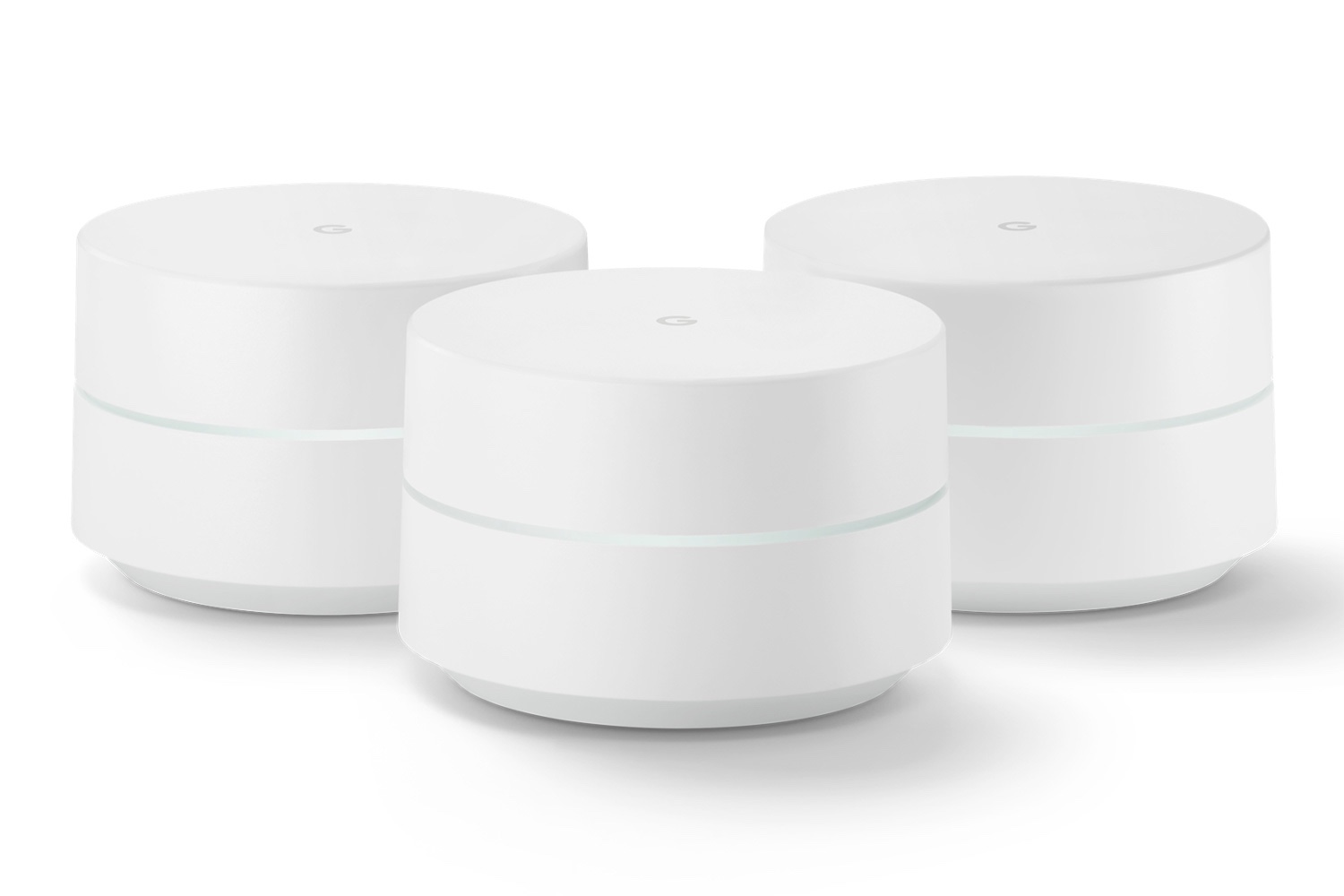 The Chromecast devices certainly aren’t pretty. The video-streaming version, now in its third generation, is a coin-like gadget with a short HDMI cord that hangs from a TV’s rear or side HDMI port. 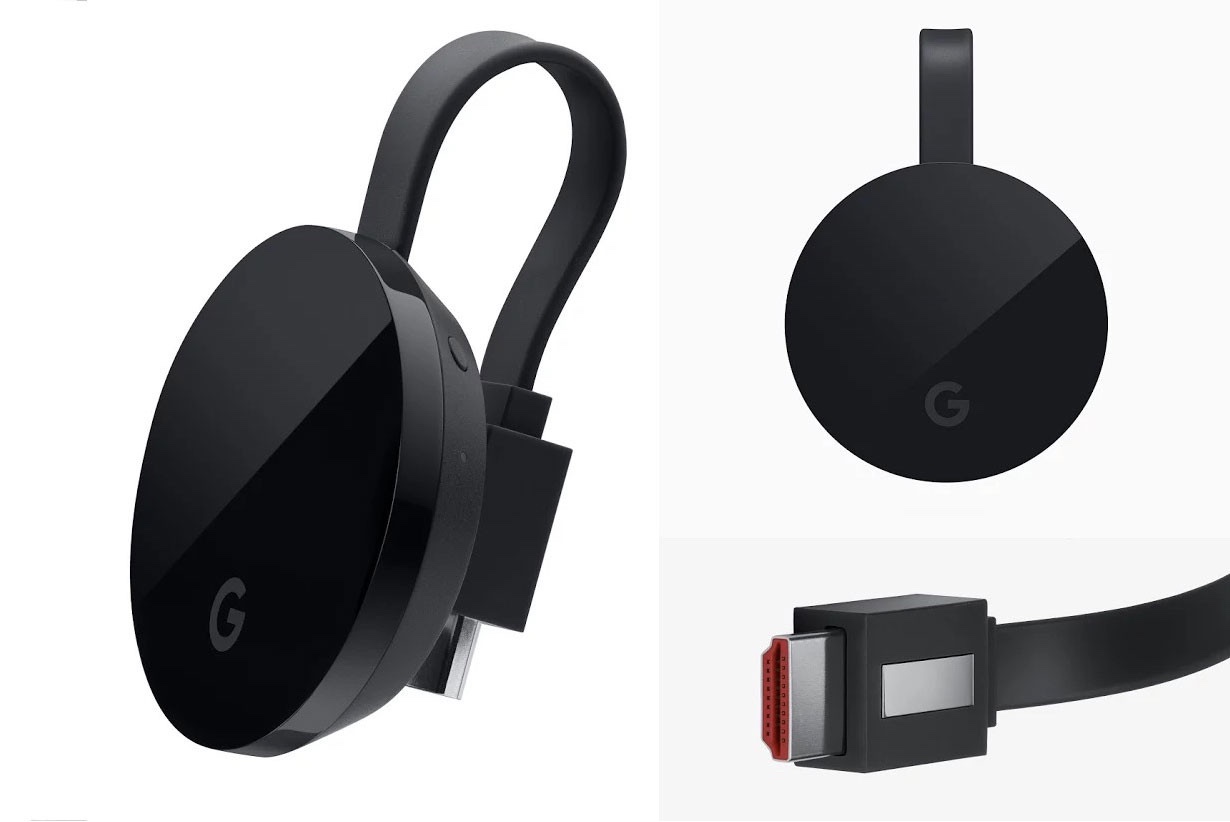 There is no remote, either. You have to use your phone (it supports both the iPhone and Android phones) to pull up online streaming content that you then send to the TV via the Chromecast.

Chromecast Ultra will become available in November 2016 for $69, a bargain compared to the Apple TV, which starts at $149.

Competition Makes the World Go Round — Nothing Google announced at its this product event is likely to make an Apple user jump ship. Sure, Apple users who followed these Google revelations might be a bit jealous due to the lack of fast charging in the iPhones, the absence of HDR and 4K in the Apple TV, the dearth of innovation in Apple’s AirPort base stations, the lack of an Amazon Echo/Google Home competitor, and Apple’s no-show status in the increasingly active virtual-reality field.

But that’s not the point. Apple’s gear has plenty of other advantages for now, and Google’s improvements keep Apple from resting on its product design laurels. And that results in better technology for us all.