Although Apple mostly adds features to new releases of the Mac operating system, it’s not uncommon for the company to remove small features or support for older technologies. Needless to say, Apple doesn’t trumpet these removals from the rooftops, as it does with new features, leaving it to users who relied on a previous behavior to discover the change.

Here then are five features that have gone missing from macOS 10.12 Sierra:

Not all of these are bad — the removal of support for PPTP VPN connections and DSA SSH keys may be annoying but increases Sierra’s security. Nevertheless, I’ve tried to suggest workarounds where possible.

System Language vs. Format Language — Here’s a subtle change that reader Hans van Maanen alerted me to. In previous versions of OS X, you could set a primary system language in System Preferences > Language & Region, and then click the Advanced button to set a separate format language. Hans appreciated this split in OS X 10.11 El Capitan because it enabled him to leave his system language set to English to avoid lousy Dutch localizations in the apps he used while still retaining Dutch as the format language for dates, times, and numbers.

International readers will likely understand what I’m talking about here, but for those in the United States who may not realize, people in other countries often use different formats for things like dates. For instance, the short date format that I get when using English in the United States would look like 1/5/16 (for January 5th, 2016, which is the sample date for reasons I don’t know). However, if I change the Format Language pop-up menu (in El Capitan) to Dutch, the short date format changes to 05/01/16. And, of course, the names of days and months are different in other languages. 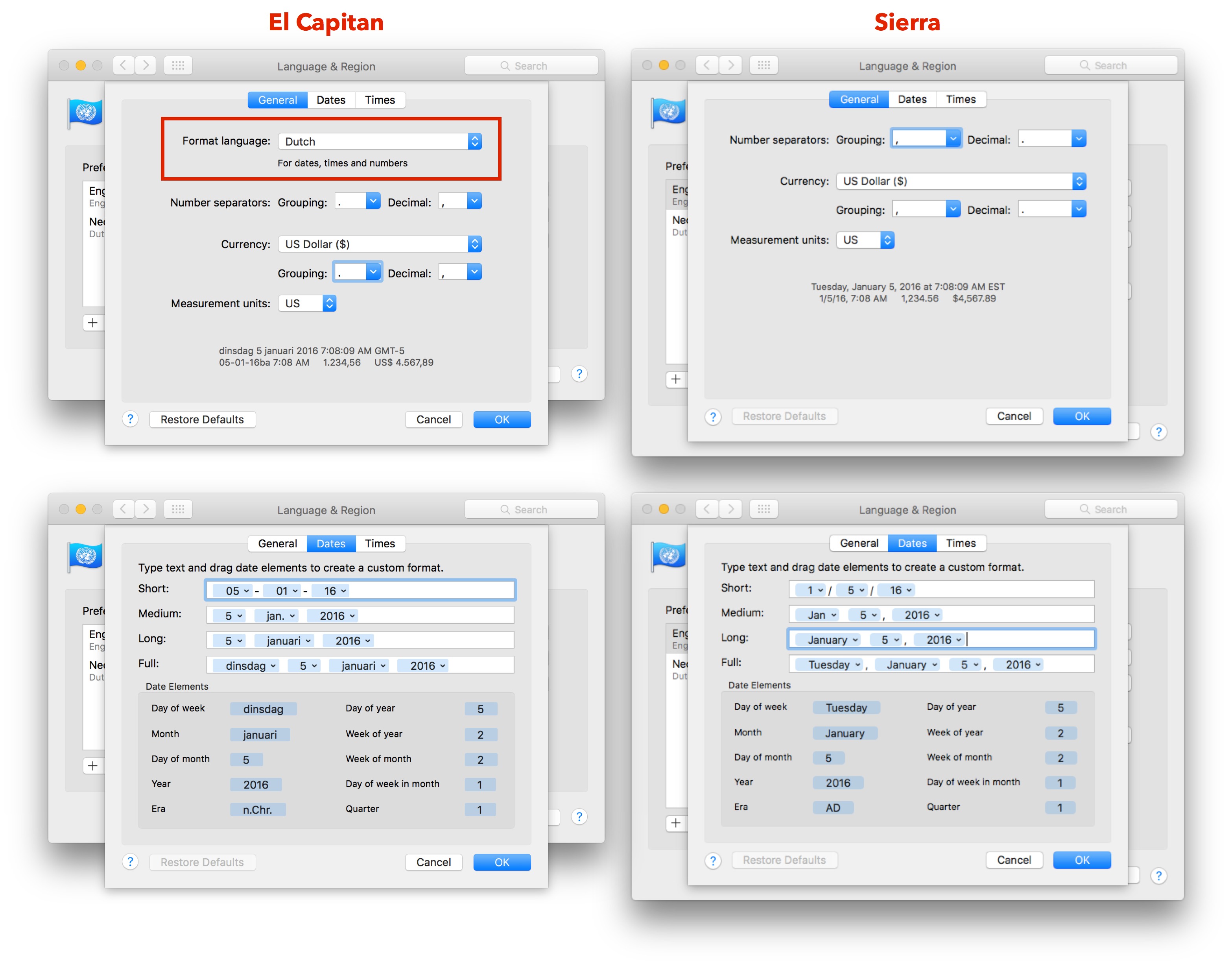 You can still choose your country separately from the Region pop-up menu in the main view of Language & Region, but that controls only settings like the first day of the week, the calendar type, the time format, and the formatting for dates and times. Notably, it does not change the names of days and months to the language associated with the selected region.

Thanks to reader RT for discovering the workaround! In Terminal, enter this command and press Return to use Dutch:

The key part of that command is the pair of two-letter codes at the end. From what I can tell, the first is an ISO 639-1 language code that corresponds to the format language used for the names of days and months, and the second is an ISO 3166-1 alpha 2 country code that matches the country selected in the Region pop-up menu.

Should you wish to reset the formatting language to match your primary system language, just click Restore Defaults in the Advanced dialog.

Modem-based Faxing — Thanks to reader Jim Weil for alerting us to this missing feature, and my apologies in advance if I don’t describe this quite right since I don’t have the necessary hardware. Starting in 10.7 Lion, Apple removed support for the Apple USB Modem, which some people used for faxing with the Print & Fax pane of System Preferences in 10.6 Snow Leopard and earlier.

However, third-party USB modems that came with their own drivers, notably some models from USRobotics, continued to work with Lion, and you could still add and use a fax modem from the renamed Print & Scan preference pane. That status quo continued through 10.11 El Capitan, even as the preference pane was renamed once again to Printers & Scanners.

In Sierra, however, USRobotics support has confirmed that Apple removed even the capability to add a fax modem with external drivers to the Printers & Scanners preference pane.

Console Loses Its Memory — The Console app has long been an essential troubleshooting tool on the Mac because it provides a way of browsing through all the log messages generated by the operating system. Although most users don’t realize this, there’s a lot of chatter that goes on at the operating system level.

As reader Tom Robinson noted in TidBITS Talk, Apple appears to have completely rewritten Console in Sierra, so much so that its version number changed from 10.11 in El Capitan to 1.0 in Sierra. Notably, Console 1.0 can display log message information in a set of user-configurable columns, filter messages to just errors and faults, and more — Kirk McElhearn has an overview at Macworld. 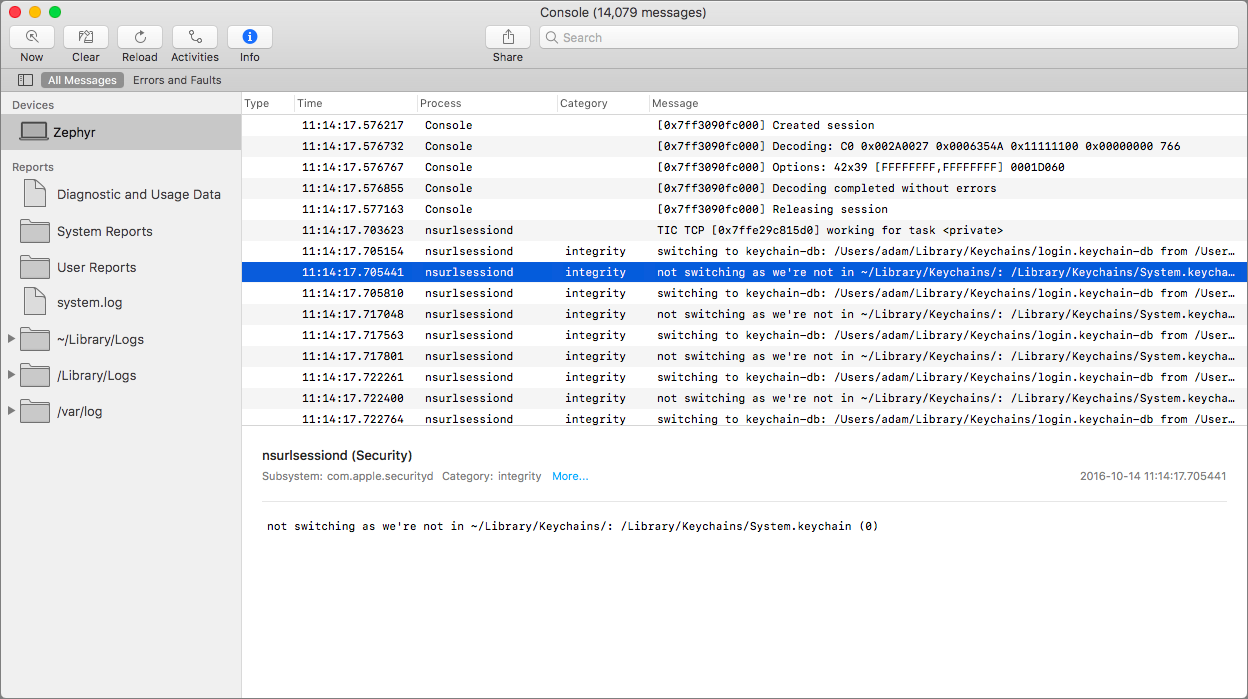 However, Console 1.0 doesn’t provide all the capabilities that Console in El Capitan had, as Howard Oakley outlines in his criticism of the new version. The most important thing that’s missing in Sierra’s Console 1.0 is historical log information. The app starts displaying logged messages when you launch it, but unlike Console in previous versions of OS X, you can’t go back in time to see what was happening on your Mac last night, or
the day before. That capability is a huge help when tracking down a problem that you can’t reproduce at will.

The log messages are still available; you just can’t get to them easily from within Console 1.0. Instead, you can use the new log command in Terminal or a little utility Howard Oakley created called LogLogger2. Unfortunately, Oakley has also documented some bugs in the log command’s output. If you’re interested in the topic, check out his other posts on Console and logs.

It’s hard to make solid recommendations here. I turned up a few alternative log viewing apps for the Mac, including Log File Navigator, Logr, and LogTail, but it’s not clear if they can provide access to the historical log information in Sierra.

We can hope Apple puts more effort into the new version of Console in updates to Sierra, or perhaps an independent developer will fill the void.

PPTP VPN Connections — PPTP, which stands for Point-to-Point Tunneling Protocol, is, as Wikipedia bluntly states, “an obsolete method for implementing virtual private networks, with many known security issues.” Of all of Sierra’s changes, this one should be the least surprising, since Apple has been warning against the use of PPTP since at least the release of 10.11 El Capitan and iOS 9. Apple also removed PPTP support from iOS 10.

In general, this move is positive — flawed security protocols should be avoided. Unfortunately, despite PPTP’s weaknesses, some VPNs still require it. Two solutions present themselves: switch to another VPN protocol or install a third-party VPN client that still supports PPTP, such as Shimo or VPN Tracker. Obviously, since the entire point of a VPN is to protect your data
connections, continuing to use the insecure PPTP isn’t sensible, but it may be the only option for certain organizations.

DSA SSH Keys Deprecated — This change, which reader Ron Risley mentioned on TidBITS Talk, falls into roughly the same category as the previous one. Many who rely on SSH to log in to remote servers at the command line also use SSH keys to increase security (in contrast to using a regular password). My understanding is that most people use RSA keys with SSH, but it has been possible in the past to use what are called DSA (Digital Signature Algorithm) keys. Unfortunately, DSA keys can usually be only 1024 bits, and Apple decided in Sierra to require 2048-bit RSA keys, which are far more secure.

The practical upshot of this is that if you can’t get into your remote server via SSH in some way other than using the DSA keys, you’ll be locked out when trying to connect from Sierra. The solution is to replace the DSA keys with 2048-bit RSA keys, and Quincy Larson provides instructions for that on Medium.

More Missing Features? — I’ve tried to avoid truly minor changes here, such as Time Machine trading its On/Off switch for a Back Up Automatically checkbox. But it’s entirely possible there are other features from El Capitan that are missing in Sierra — if you know of any, or have additional workarounds for the ones I’ve outlined here, please leave a comment!