Mactracker 7.6 — Ian Page has released Mactracker 7.6 with detailed information about major Apple hardware releases from the past couple of months, including the iPhone 7 and iPhone 7 Plus, as well as Apple Watch Series 1 and Apple Watch Series 2. It also covers the most recent updates to Apple operating systems, including macOS 10.12 Sierra, iOS 10, watchOS 3, and tvOS 10. The popular encyclopedia of Apple products also adds support for Sierra, a Supported Devices list to each iOS release, photos of recent models optimized for Retina displays, and Geekbench 4 performance scores for recent models. (Free from the Mactracker Web site or
the Mac App Store, 81.7 MB, release notes, 10.7+)

PDFpen and PDFpenPro 8.2.1 — Smile has issued version 8.2.1 of PDFpen and PDFpenPro, which fixes a bug that prevented print preview from displaying the first page of a PDF correctly. The PDF editing apps also correct a “selected folder not writable” error when scanning in macOS 10.12 Sierra and resolve numerous issues on iMacs with 5K Retina display that are running Sierra. ($74.95/$124.95 new with a 20 percent discount for TidBITS members, $30 upgrade, free update from version 8.0, 70.4/71 MB, release notes, 10.10+)

Read/post comments about PDFpen and PDFpenPro 8.2.1.

Read/post comments about ChronoSync 4.7 and ChronoAgent 1.6.1.

SpamSieve 2.9.26 — Michael Tsai of C-Command Software has released SpamSieve 2.9.26, ensuring compatibility with Apple Mail in macOS 10.12.1 Sierra. (If you have already updated to that version of Sierra, choose SpamSieve > Install Apple Mail Plug-In to install the SpamSieve plug-in and avoid accidentally moving good messages to the spam mailbox.) The spam filtering utility makes improvements to SpamSieve’s filtering accuracy, tells Apple Mail’s junk filter when incoming messages are not junk (instead of only when they are junk), adjusts sizes of the Dock icon status indicators to deal with a font change
in Sierra, and works around an OS certificate error when checking for a software update. ($30 new with a 20 percent discount for TidBITS members, free update, 13.4 MB, release notes, 10.6+)

1Password 6.3.5 — AgileBits released 1Password 6.3.4 with a single change that might throw you for a loop if you weren’t expecting it in the password management utility. The update “improves verification and authentication of communication with the 1Password browser extension.” After installing the update, you’ll be asked to verify 1Password’s connection to the extension via 1Password mini in the form of a six-digit code (shown in both 1Password mini and a Web browser tab). This verification opens automatically after installation if you have a Web browser open, or immediately after opening your Web browser the
next time. “Take Control of 1Password” author Joe Kissell also notes that if you’re using the Bartender menu control utility, “you have to click the 1Password mini icon in Bartender — not just press the keyboard shortcut — to bring it up in order to see the code.” 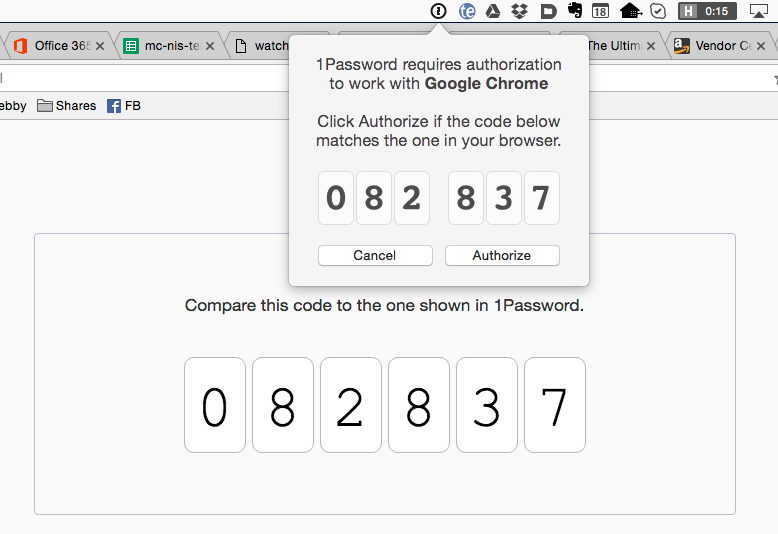 A few days after the 6.3.4 release, AgileBits updated 1Password to version 6.3.5 to fix a crash that could occur when using the 1Password browser extension, resolve an issue where the 1Password browser extension authorization window failed to display due to a missing monospace font, ensure that the app properly advises you to re-enable iCloud sync when upgrading from version 4, and correctly show the browser authentication popup when using Bartender. ($64.99 new from AgileBits and the Mac App Store with a 25 percent discount for TidBITS members when purchased from AgileBits, free update, 43.9 MB, release notes, 10.10+)

BusyCal 3.1.1 — BusyMac has released BusyCal 3.1.1 with improvements and bug fixes for the calendar app. The update improves the Quick Event panel by adding a preview of the event details as you type and providing interactive Attendee and Location pickers. The new version also adds mass transit support to Travel Time, improves 24-hour time entry in the Info panel, fixes a bug related to deleting an instance of a repeating meeting on Microsoft Exchange, fixes a crash that occurred when adding attendees with arrow keys, resolves an issue that prevented un-sharing an iCloud calendar, and corrects several user interface bugs
when running in macOS 10.12 Sierra. ($49.99 new, $29.99 upgrade, 11.3 MB, release notes, 10.11+)

Audio Hijack 3.3.2 — Rogue Amoeba has released Audio Hijack 3.3.2, which corrects a critical bug when running in macOS 10.12 Sierra where deleting blocks could cause an exception in Core Animation and leave the user interface in an inconsistent state. The popular audio recording utility also improves how the app displays the disappearance of an audio device, ensures the left and right arrows work in the Sessions tab, makes adjustments so FaceTime can be captured in Sierra, and adds support for the Avaya Spark app as a VoIP input source. Additionally, Audio Hijack now requires Instant On to capture audio from iTunes
due to changes made in iTunes 12.5 — a prompt will appear if necessary. ($49 new with a 20 percent discount for TidBITS members, free update, 16.2 MB, release notes, 10.9+)