With the debut of the fourth-generation Apple TV, Apple declared that apps are the future of TV. But the trouble with iOS-style apps on your TV is that you have to dig through them to find the content you want, unless Siri can find it for you. Apple is introducing a new app, simply called TV, that the company hopes will solve this problem.

TV on the Apple TV — The new TV app is due in December 2016 and will bring together content from all the apps you have installed that opt in to Apple’s aggregation plan. About 1600 apps could currently provide content to the TV app, but Netflix has reportedly opted out, and Amazon Prime Video is still nowhere to be seen on the tvOS platform. We expect that Netflix will come around eventually, but it’s hard to imagine Amazon changing its tune at this point.

The hub of the TV app is the Watch Now screen, which presents your favorite shows in an Up Next list. The top of that screen lets you pick up shows where you left off and shows new episodes as they become available. 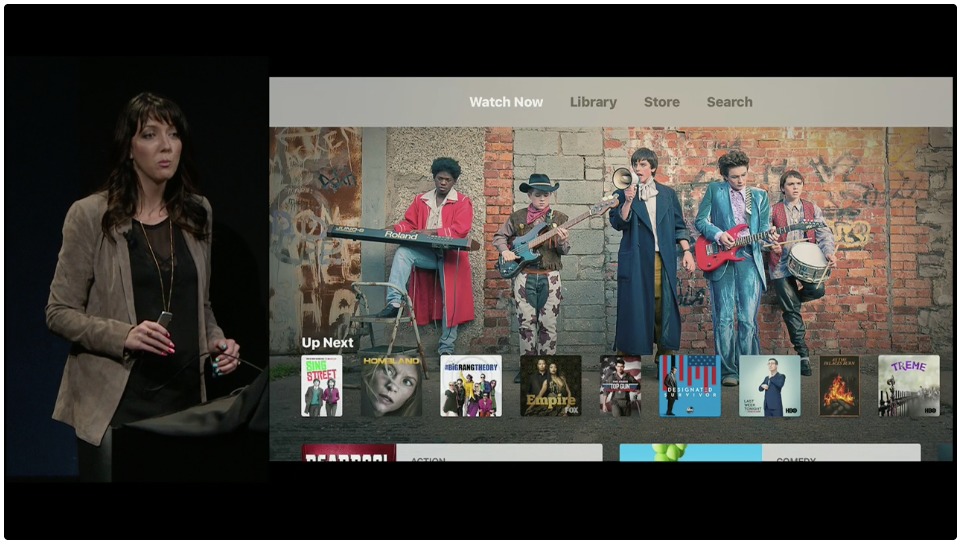 Don’t know what to watch? The Watch Now screen offers TV and movie suggestions, based on your preferences and Apple’s curation. 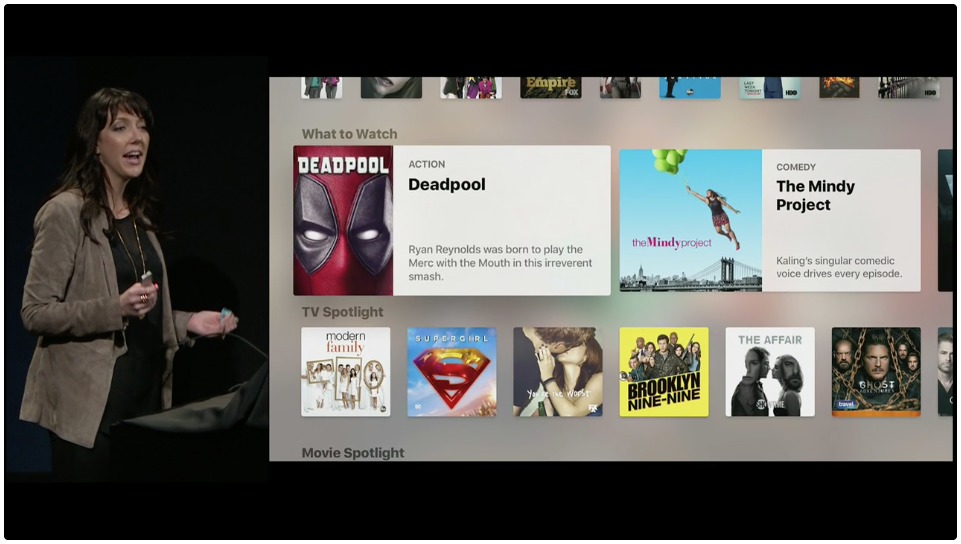 The Watch Now screen also lets you browse for TV shows and movies by category. The demo showed some unusual categories like Political Animals — presumably shows and movies with a political focus. 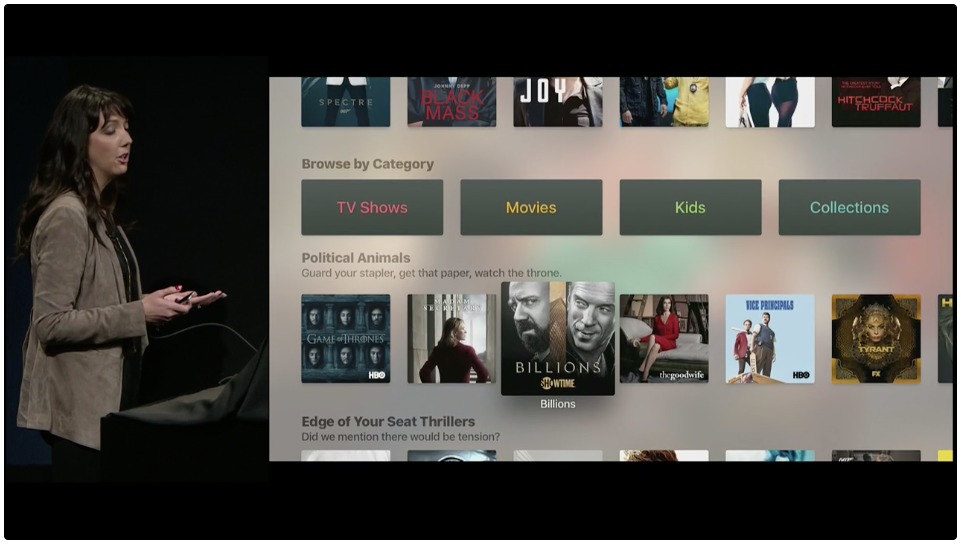 As is often the case with apps available for both tvOS and iOS, apps installed from the TV app on the Apple TV also appear on iOS devices that use the same Apple ID (if, of course, you have enabled this in your devices’ settings).

The TV app also offers a Library screen that brings together all of your iTunes-purchased TV shows and movies, as well as a Store screen that enables you to rent or buy more content. 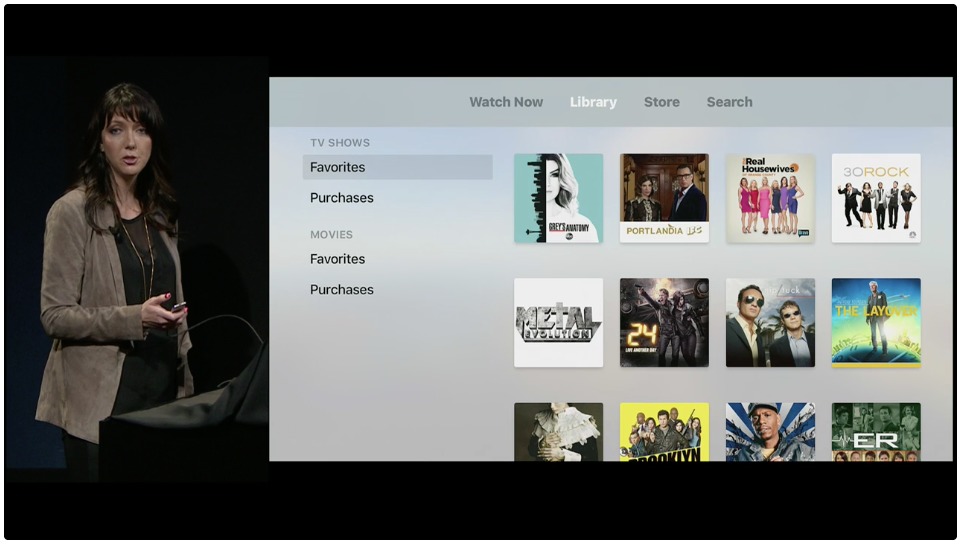 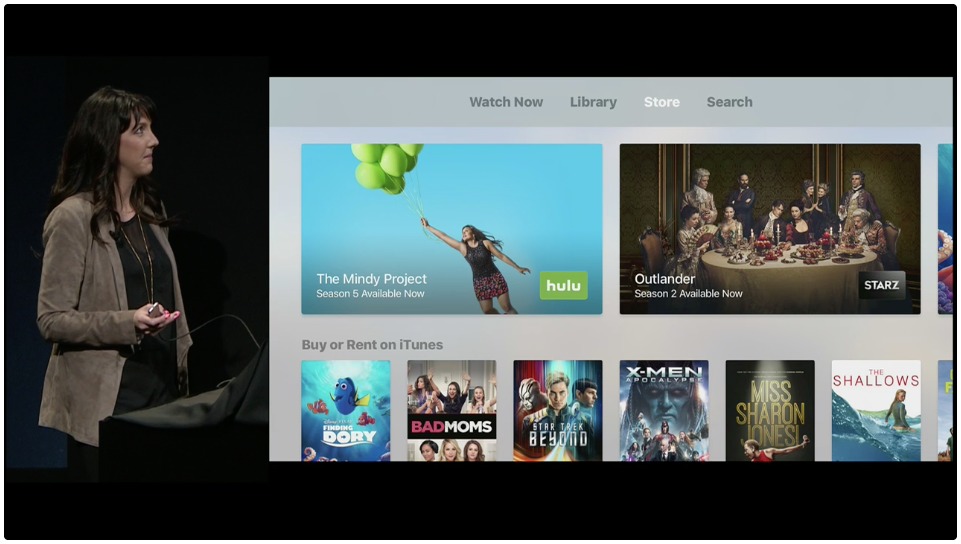 Speaking of iOS, the TV app is also coming to iOS 10, where it will replace the Videos app and provide a consistent user experience. Your content preferences will sync between the two operating systems. 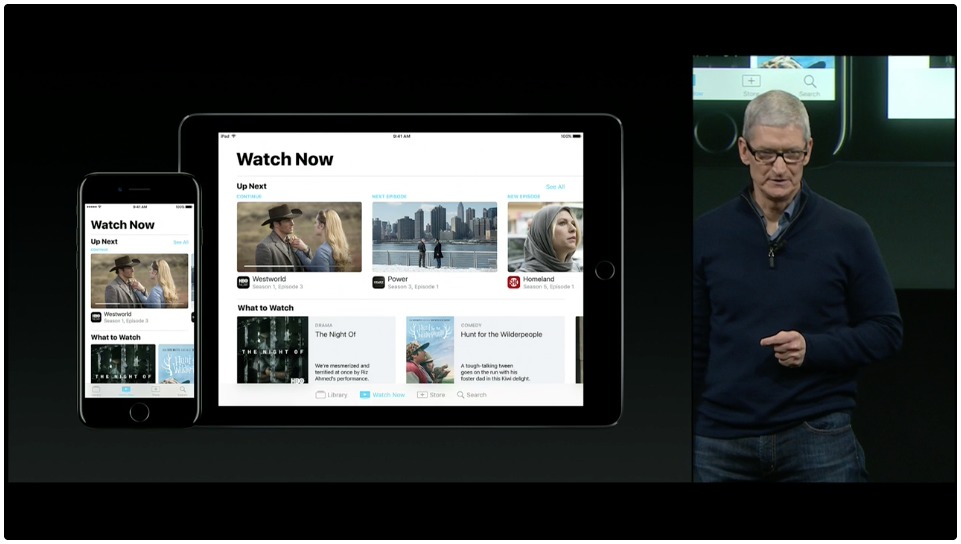 The TV app will be a big change for how you use the Apple TV, so much so that the Home button on the Siri Remote will open the TV app instead of going to the Home screen. I presume that you’ll jump to the Home screen the same way you did on the third-generation Apple TV, by pressing and holding the Menu button.

Single Sign-On, Sort Of — Along with the TV app, Apple will finally introduce the Single Sign-On feature it promised for tvOS 10 (see “tvOS 10 Brings Dark Mode and More,” 13 June 2016). That feature gives you a central place to sign in to your TV provider to authenticate multiple content apps, instead of having to connect to each one individually.

Unfortunately, per Apple’s own press release, the only two major TV providers that will support Single Sign-On at launch are DirecTV and Dish. If you subscribe to Comcast, Cox, or Time Warner Cable, you’ll still have to activate every app individually for now.

Siri to Straddle Operating Systems — We’ll also see some Siri improvements alongside the TV app. Siri can already show you sports scores and display live content, but Apple is enhancing that capability soon. Folse demonstrated asking Siri about “the Louisville game,” and got back the current score and an option to view the game live. 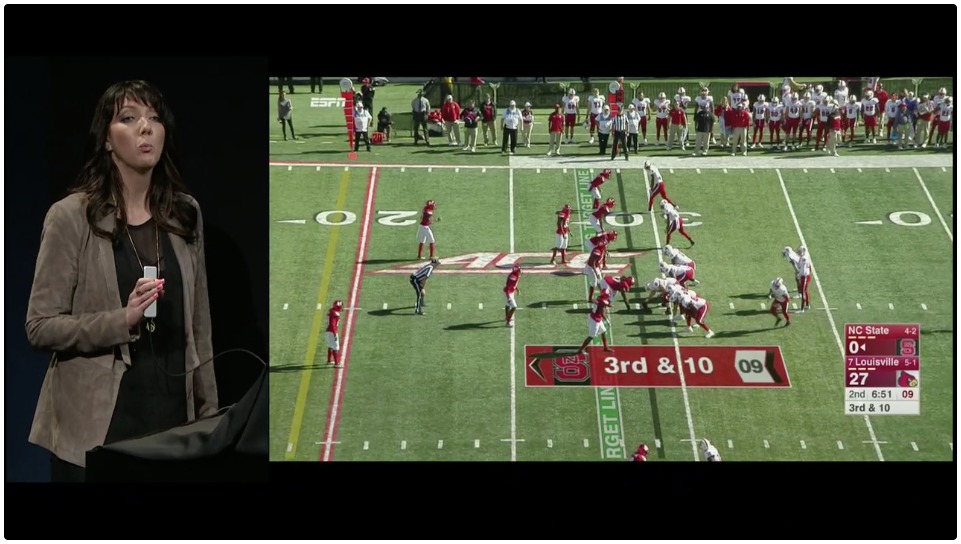 Additionally, you’ll finally be able to search for TV and movie content on your iPhone and iPad. Right now, if you try to use Siri in iOS to search for James Bond movies, it just displays a generic list of random films. It will be nice to finally see these two Siri implementations work the same way for media content.

Minecraft Arrives on Apple TV — In other big Apple TV news, Minecraft is coming to tvOS by the end of the year! Minecraft is one of the largest gaming success stories in recent history, making its creator, Notch, an instant billionaire when Microsoft purchased Minecraft for $2.5 billion. The game combines a fantasy role-playing game with a virtual Lego set, and it has become a sensation with kids of all ages. For more on that, see “FunBITS: A Minecraft Crash Course” (19 September 2014).

I’m curious to find out how controllers will work with Minecraft. I don’t see how the game could be playable using the Siri Remote, so it might be one of the first to require a Made for iPhone (MFi) game controller. At first, almost all tvOS game developers had to support the Siri Remote for game control, but that changed with tvOS 10, which lets them instead depend on a custom MFi controller (see “tvOS 10 Brings Dark Mode and More,” 13 June 2016).

Better but Still Not Great — The TV app is a step in the right direction, making Apple TV content easier to find and improving the content viewing experience in both tvOS and iOS. However, without Netflix or Amazon Prime Video, it lacks two key sources of content that leave it crippled, if not completely dead in the water. It was hard not to snort as Apple talked about how TV would provide access to “all your video,” knowing that for many people, Netflix is all they watch.

The TV app pushes tvOS closer to competitors like Amazon’s Fire TV and Google’s Android TV, both of which implement a more content-focused approach on their home screens. But that approach has a downside: they often show you what they want you to see (and pay for), not what you necessarily want to watch. Will Apple strike pay-to-play deals for content owners to be featured in the TV app? Maybe they have already.

Another annoyance with the Apple TV is its lack of support for 4K resolution content, which Apple touts elsewhere, such as on the iPhone 6s and later and with Final Cut Pro X on the Mac. Right now, if you have a 4K TV, you need to either use its built-in apps or a 4K-capable Blu-ray player, Fire TV, or Roku box to take advantage of 4K content. Even if you don’t have a 4K set, you could still see improvements with 4K streaming. My new Sony TV has made me realize how “noisy” even 1080p streaming content is, resulting in pixelated backgrounds and other ugliness. Even though I don’t always see a huge difference in sharpness with 4K content from Netflix, I do notice its lack of visual artifacts.

One final thing to chew on. As my pal Zac Cichy pointed out, the TV app’s icon is identical to the Home button on the Siri Remote. Did Apple intend to ship the TV app with tvOS, and was it always meant to function as the Home screen? Was it held back due to a lack of content deals? Why is Apple introducing the TV app now, and why isn’t Netflix on board? I would love to learn the answers to these questions, but I’m not sure we’ll ever get them.

And now I need to get started on the third edition of “Take Control of Apple TV.”