Many information junkies keep up with their favorite Web sites by subscribing to their RSS feeds, pulling the latest updates from those sites into a central location for efficient perusal.

I rely heavily on RSS to keep me abreast of the latest tech news. I’m also addicted to political sites during this year’s bizarre presidential election, and I’ve tapped into a host of feeds to keep me up to date on the latest antics from the candidates.

Subscribing to feeds on a Mac is easy enough, with many options. For instance, browser extensions for Google Chrome can sniff which Web sites have feeds — not all do — and let you subscribe with a click or two. Similar extensions exist for other browsers. Alternately, you can plug a URL into an RSS newsreader – such as the Reeder desktop app or the Web-based Feedly – to unearth the site’s feed or feeds that way. (For more information on these apps, see “The State of Google Reader Replacements,” 27 June 2013.)

A $2.99 iOS app called Feed Hawk aims to do the same thing on iPads and iPhones. It’s not an RSS newsreader, but instead a utility to help you subscribe to a site’s RSS feed for subsequent consumption in the newsreader of your choice.

Feed Hawk works in tandem with a variety of newsreader services – including Feed Wrangler, Feedbin, FeedHQ, Minimal Reader, The Old Reader and NewsBlur – that RSS users harness to consolidate their feeds for reading sessions. These services are particularly helpful to those who read on multiple devices and want to sync what they have and have not read. 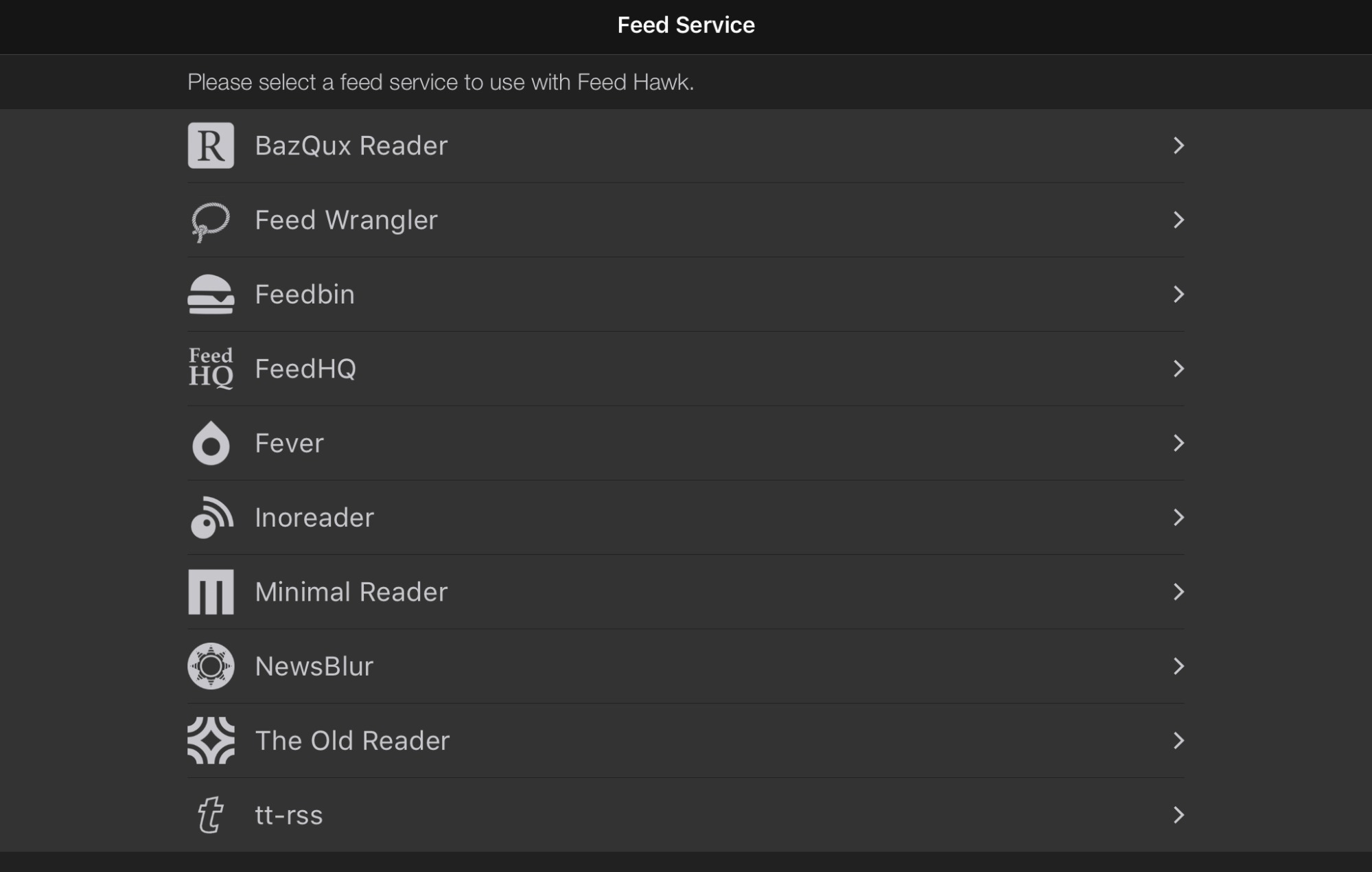 If you already use one of these services, Feed Hawk is a potential boon. Log in to your service of choice within Feed Hawk. Then, when you enter a site’s URL in Feed Hawk and tap the corresponding RSS feed, it will be added your service’s collection of feeds.

Even more conveniently, Feed Hawk is available in the share sheet of most iOS Web browsers, including Safari, Chrome, and Firefox. Invoke the share sheet when you are on a Web site of interest and select Feed Hawk. It returns feeds available for the site. Select the one you want and Feed Hawk adds it to your RSS library.

At one time, Feed Hawk would have been a godsend for RSS users on iOS devices for one reason: feed subscribing on an iPhone or an iPad used to be much more of a pain than on a Mac.

Unfortunately for Feed Hawk developer Golden Hill Software, that’s not necessarily the case anymore. It’s now easy to subscribe to RSS feeds within many newsreader apps, including iOS versions of Reeder and Feedly, along with apps like Newsify.

Even so, Feed Hawk would likely still be of more interest if it supported the hugely popular Feedly, along with less well-known services like BazQux Reader and Inoreader.

John Brayton, owner of Golden Hill Software, told me that the lack of Feedly support is beyond his control. He wrote, “I would very much like to support Feedly (but it) is in the process of creating a new version of its API and is not providing API access to new apps in the meantime. I will support Feedly as soon as I can, but I do not know when that will be.”

Feed Hawk isn’t the only iOS app of its kind. The $1.99 Add My Feed works on essentially the same principle, but with a slightly different mix of supported newsreader services (also not including Feedly, though the publisher claims support is coming soon).

Nonetheless, Feed Hawk is worth a look if your preferred newsreader is both supported and lacks an easy way to subscribe to new feeds.

But keep in mind that the popular Reeder app (iOS and Mac) also supports all these newsreader services. Log in to Feedbin, Feed Wrangler, or Feed HQ within Reeder. Then, when you subscribe to a feed with Reeder and sync with any of these services, it gets added to your Reeder library.

Notably, this also works with Feedly, which Reeder has supported for some time. A number of other newsreader apps also work with Feedly.

In short, Feed Hawk is a tempting and useful app, but far from indispensable unless you’re using a newsreader app and service that doesn’t otherwise provide simple feed adding.