VMware Fusion 8.5.1 — VMware has updated the standard and Pro editions of its virtualization package to fix a crash when running a Windows 10 virtual machine in Unity mode. VMware Fusion 8.5.1 also fixes a bug that merged virtual displays into one space in different tabs when using multiple monitors in Full Screen mode in macOS 10.12 Sierra. It also resolves a problem where the tab bar on the virtual machine window became blank when moving the mouse pointer into the virtual machine when running in Sierra. ($79.99/$199.99 new, free update, 368 MB, release notes, 10.9+)

DEVONthink/DEVONnote 2.9.6 — DEVONtechnologies has updated all three editions of DEVONthink (Personal, Pro, and Pro Office) and DEVONnote to version 2.9.6. The three DEVONthink editions receive workarounds for issues related to PDFs when running in macOS 10.12 Sierra, improve scanning compatibility with Sierra, introduce the capability to add HTML checkboxes to formatted notes, improve synchronization performance and reliability, and add support for accepting images to the sharing extension. DEVONtechnologies also updated the DEVONthink To Go iOS app to version 2.0.5 with an added PDF thumbnail view and improved memory of your reading and playback positions

Final Cut Pro X 10.3 introduces the Magnetic Timeline 2 with color coding of clips based on roles such as dialogue, music, and effects, an enhanced Timeline Index that enables you to drag and drop audio roles to rearrange the layout or highlight specific audio roles, and iXML support that enables automatic creation and assignment of roles based on metadata. The release also enables you to copy and paste timecode to speed up numerical entry from text documents, enables you to use a Thunderbolt cable for direct A/V output to an external display, and adds support for a number of video formats (MXF-wrapped Apple ProRes, Canon Log2/Cinema Gamut and Panasonic V-Log, and Sony XAVC-L at 4K).

Compressor 4.3 improves the iTunes Store Package, enabling you to audition alternative audio, closed captions, and subtitles to verify sync, bypass unnecessary compression in the media pass-through, and switch between audio streams during asset playback to speed up verification. Additionally, detailed video and audio file information is now displayed in the Inspector, and the app adds support for OpenEXR still images and image sequences.

Airfoil 5.5 — Rogue Amoeba has released Airfoil 5.5, a major update to the wireless audio broadcasting app that adds support for streaming audio to Google Chromecast devices (including Chromecast Audio, the second-generation Chromecast Video, and the original stick-shaped Chromecast model). The update also improves how Airfoil works with the Airfoil Satellite app for Mac and iOS, adding support for AppleScript, displaying Airfoil Satellite instantly, and offering optional global hotkeys for playback
control. The release also no longer separates speakers out by type in the main window, and it improves handling of missing audio output devices. ($29 new with a 20 percent discount for TidBITS members, free update, 14.4 MB, release notes, 10.9+)

GarageBand 10.1.3 — Apple has released GarageBand 10.1.3, adding support for the context-sensitive Touch Bar on the new MacBook Pro (see “New MacBook Pros Add Context-sensitive Touch Bar,” 27 October 2016). The update enables you to adjust all the Smart Controls on a selected track using the Touch Bar, as well as fine-tune the sound of instruments and effects or adjust the volume of a track with a tap of the Touch Bar. (Free with new Macs or $4.99 new from the Mac App Store, free
update, 949 MB, 10.9+)

iMovie 10.1.3 — Apple has released iMovie 10.1.3, adding support for the new context-sensitive Touch Bar on the new MacBook Pro (see “New MacBook Pros Add Context-sensitive Touch Bar,” 27 October 2016). The update enables you to add video clips to your movie using the Touch Bar, as well as use clips to create picture-in-picture, green screen, and split screen effects. It also adds support for tapping the Touch Bar to play your movie, split a clip, or adjust the volume of any clip. (Free with all new Macs or $14.99 from the Mac App Store, free update, 2.05 GB, 10.11.2+)

iTunes 12.5.2 — Apple has released iTunes 12.5.2 with the usual stability and performance improvements, as well as a fix for a bug that prevented lyrics from appearing while listening to Beats 1. The update also resolves a problem where albums would not play in the expected order — an issue that had bedeviled us.

If you selected a song from an album in either the Albums or Recently Added views in iTunes 12.5.1, the play order would be dictated by how the Songs view was sorted. Thus, rather than playing the next track on a selected album, as you would expect, iTunes would create a play order (viewed using Up Next) that followed the Songs view sort order (i.e., song title, play count, last played, etc.). We’ve tested version 12.5.2, and it has brought back the album play order behavior of old — going track by track within an album just as the vinyl gods intended it. (Free, 263 MB via direct download or Software Update, release notes, 10.9.5+) 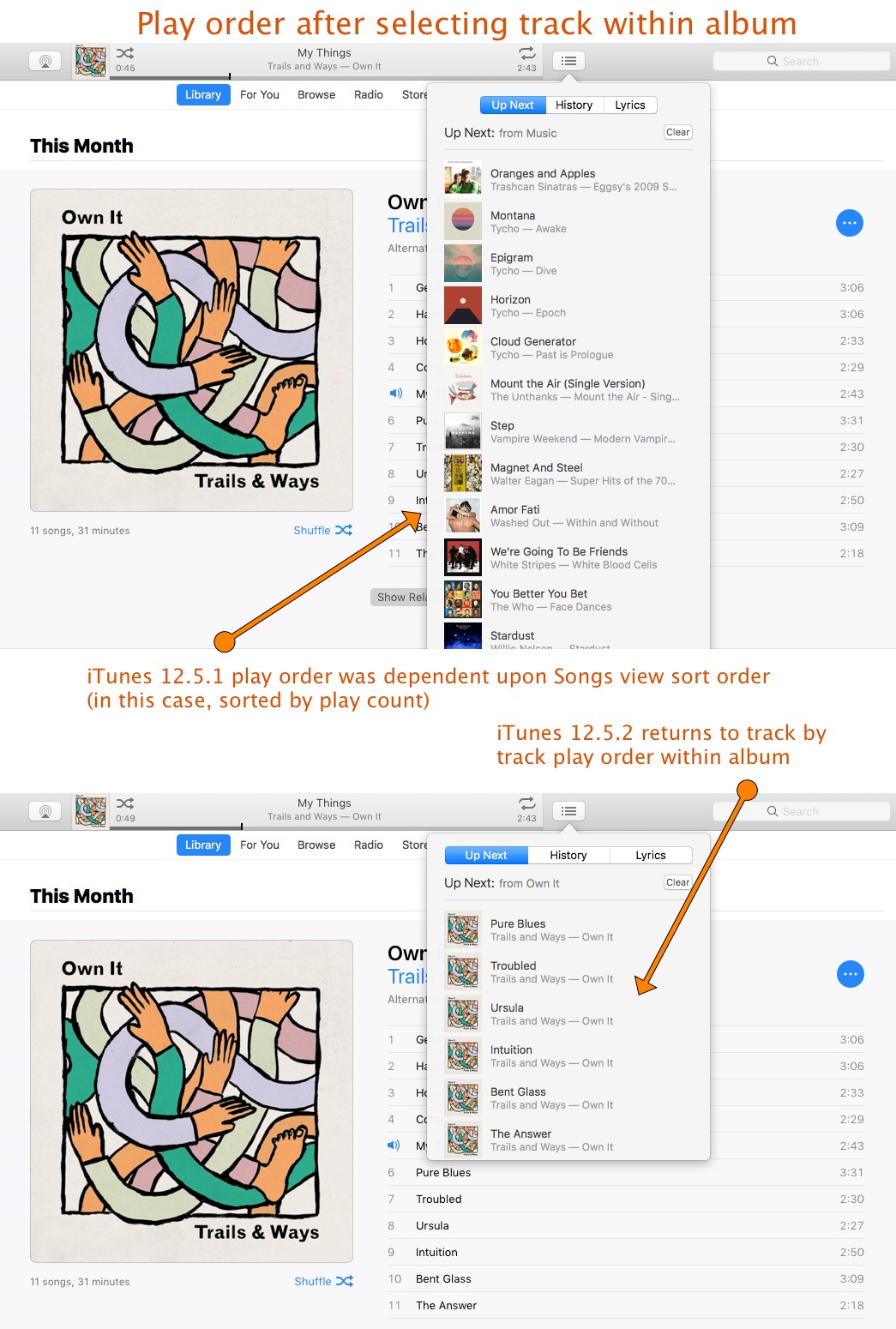 MoneyWiz 2.5 — SilverWiz has released version 2.5 of MoneyWiz, the personal finance app that received good notices in our roundup in early 2016 (see “Your Favorite Mac Personal Finance Apps,” 29 February 2016). The update adds support for adding tags to transactions as well as budgets, which changes the app’s data format and requires you to update MoneyWiz on all platforms to ensure that the SYNCbits system correctly synchronizes data across all your devices. MoneyWiz 2.5 also now enables you to sync transaction receipts across all devices; adds 14 new reports; improves online
banking auto-categorization; introduces the capability to add filters to reports by categories, payees, and tags; and enables you to disable auto-categorization for online banking accounts on a per account basis.

MoneyWiz is free to download and use for up to two offline accounts. To add more accounts or be able to connect to online banking or PayPal, you’ll need to purchase a subscription — either $5.99 monthly or $59.99 annually. The subscription also enables you to sync data across all of your Mac, iOS, Windows, and Android devices. ($59.99 annual subscription, free update, 20.8 MB, release notes, 10.8+)

Safari 10.0.1 — Apple has released Safari 10.0.1 for OS X 10.10.5 Yosemite and 10.11.6 El Capitan (macOS 10.12.1 Sierra also includes it) with a couple of security patches for WebKit. The update eliminates multiple memory corruption issues that could allow arbitrary code execution and an input validation issue that could result in the disclosure of user information — both occurring after processing maliciously crafted Web content. The release also addresses a number of unspecified bug fixes. Safari 10.0.1 is available only via Software Update. (Free, release notes,
10.10+)

Art Text 3.1 — BeLight Software has released Art Text 3.1 with improvements for the graphic design app that include a new Depth Gradient effect for 3D objects, three new 3D chamfer types, and a new 3D Shear Transformation. The update also brings support for macOS 10.12 Sierra, enables you to create isometric-style graphics with the Camera Parallel Projection tool, introduces a custom image folder where you can make and fine-tune 3D textures, lets you save user style elements as a template in Custom Templates, and adds 20 logo samples. ($29.99 new from BeLight Software or the Mac App Store, free update, 628 MB, release notes, 10.10+)

Keyboard Maestro 7.3.1 — Peter Lewis of Stairways Software has released Keyboard Maestro 7.3.1, a maintenance release that fixes the Send Now option of the Send Mail Message action when running in macOS 10.12 Sierra. The powerful automation and clipboard utility also resolves an issue with read/write variables in the Custom HTML Prompt in Sierra, ensures the Composite onto Image action works on pixels (regardless of DPI), and fixes a possible memory corruption issue. ($36 new with a 20 percent discount for TidBITS members, free update, 19.6 MB, release notes, 10.10+)

Slack for Mac 2.3 — Slack has released version 2.3 of its Mac desktop client, improving startup performance and when switching channels or teams. The group messaging system and productivity tool streamlines the user interface when you’re signed into more than one team by removing the title bar from the window, redesigns the team sidebar with better support for light themes, adds full-screen support when signing into a new team, and enables you to approve deep links from other apps. (Free from Slack and the Mac App
Store, 64.2 MB, 10.9+)

Read/post comments about Slack for Mac 2.3.

Moneydance 2017 — The Infinite Kind has released Moneydance 2017, a major upgrade for one of the top vote-getters in our reader survey of personal finance apps from early 2016 (see “Your Favorite Mac Personal Finance Apps,” 29 February 2016). The new version adds a fully encrypted incremental syncing engine that enables you to sync data across multiple computers and mobile devices, and it can now use any shared folder (such as Dropbox) to sync data with end-to-end encryption. The new version adds integrated support for Python scripts, enabling you to use the new script
editor to build and run your own scripts or extensions.

Moneydance 2017 also enables you to choose from multiple color schemes or create your own, fixes a budget calculation bug, cleans up portfolio allocation and other graphs, adds the Command-T keyboard shortcut to center you on today’s transactions in a register, improves the cleanup process that runs in the background when shutting down or switching files, and improves behavior when dealing with OFX correction transactions.