Apple has recently been taking heat for its Mac line, which is seen by some as moribund over the past few years. The Touch Bar built into the new MacBook Pro notebooks is a bright spot, but the machines otherwise struck many as lackluster (see “New MacBook Pros Add Context-sensitive Touch Bar,” 27 October 2016). Then there are the Mac Pro and Mac mini, which haven’t seen significant upgrades in years.

What about the iMac? That desktop machine has seen a consistent stream of upgrades over the years — including improvements in screen resolution and under-the-hood revisions. But its basic design — a tiltable display on a metallic base — has remained essentially unchanged since the iMac G5 in 2004.

The iMac would appear to be the target of Microsoft’s latest product reveal: a new desktop PC with a 28-inch touchscreen that can be lowered to a 20-degree angle for use as a “drafting table” of sorts for stylus-driven creative projects.

This computer, called Surface Studio, was unveiled the day before Apple showed its laptops, causing a flood of commentary about how Microsoft is supposedly out-innovating Apple.

That’s open to debate. Tiltable touchscreens on Windows desktop machines aren’t new, though the PC world has never seen anything quite like the Surface Studio.

Microsoft’s first-ever desktop machine raises questions. Why has the iMac’s design evolved so little over more than a decade? Can a case be made for Macs with touchscreens, regardless of the existence of the iPad? Has Microsoft conjured up a fresh approach to desktop computing that will lure creative professionals from Apple… or is the Surface Studio an overpriced dud?

New Surface Surfaces — The Surface Studio is a departure for Microsoft’s hardware division, which until now has focused on mobile computers. These include four generations of the Surface Pro, a laptop/tablet hybrid with a flip-out stand and a keyboard cover, and two generations of the Surface Book, a laptop with a touchscreen that can be removed for tablet-style manipulation (see “Microsoft Surface: A Tale of Two Computers,” 11 March 2014).

Microsoft has enjoyed some success with its Surface computers — enough, it would seem, to keep expanding into form factors that increasingly resemble and compete with Apple’s Macs. The Surface machines are a shift for the once software-focused Microsoft, as it aspires to become a dominant hardware purveyor.

The Surface Studio is unquestionably an iMac competitor, though a pricey one, starting at $2999. In comparison, Apple’s top-of-the-line 27-inch iMac with 5K Retina display is seemingly a steal at its base price of $2299.

Microsoft, which will sell its new machine this year in only limited quantities, is positioning the Surface Studio as a tool for creative professionals with deep pockets. It’s not a product for the frugal masses.

For creatives, the Surface Studio has a host of enticing features. It includes a 28-inch display that shifts effortlessly on two metallic arms and what Microsoft calls a Zero Gravity Hinge from an upright position to its drafting-table mode. It sports a low-profile base unit that users can drag across a desktop nearly effortlessly when repositioning is required, which is often.

Microsoft also offers a cylindrical accessory called the Surface Dial that adheres magnetically to the display and operates as a controller for certain apps. Artists can employ a stylus in conjunction with the Surface Dial for sketching, drawing, and photo-editing projects. The keyboard features a numeric keypad and is a dead ringer for the classic Apple Keyboard with Numeric Keypad, though with grayish keys. Finally, the Surface Studio’s mouse is far more comfortable than Apple’s Magic Mouse 2. 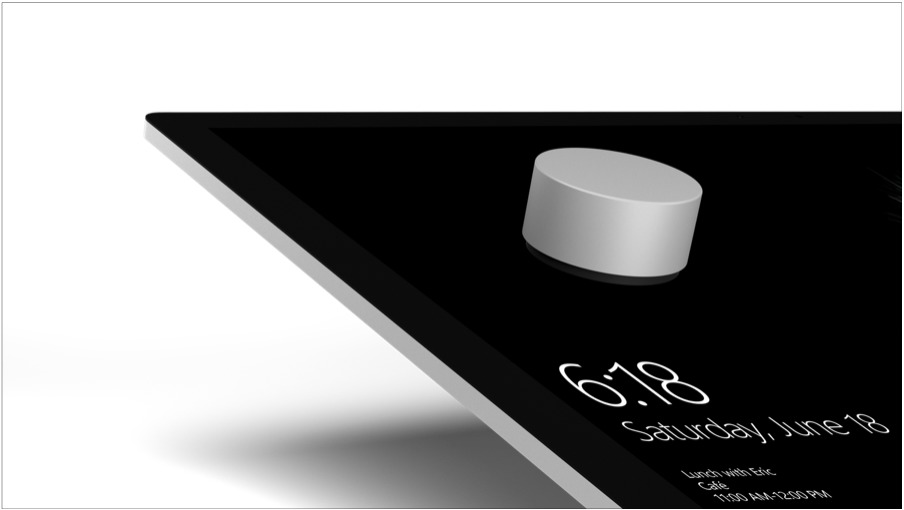 Speeds and Feeds — In terms of specs, the iMac and Surface Studio aren’t far apart. Both machines offer sixth-generation Intel Core i5 or i7 chips, between 8 and 32 GB of RAM, 1 or 2 TB “Rapid Hybrid Drives” — Microsoft’s answer to Apple’s Fusion Drive — a quartet of USB 3.0 ports, and an SD-card reader. The iMac boasts two Thunderbolt 2 ports while the Surface offers a single DisplayPort without added Thunderbolt capabilities.

Both have stereo speakers, dual microphones, a headphone jack, and support for Bluetooth 4.0 and the latest Wi-Fi. Both weigh 21 pounds (9.5 kg).

Despite the nominal sizes, the screens have different proportions. The Surface Studio’s screen measures 25.09 by 17.27 inches (63.73 cm by 43.87 cm), whereas the iMac’s screen is 20.3 by 25.6 inches (51.56 cm by 65.02 cm). Apple’s unholy fascination with thickness has apparently infected Microsoft as well, since the company says the Surface Studio display is the thinnest ever at this size. Whatever.

Touch or No Touch? — In terms of hardware, the Surface Studio’s major difference from the iMac is touch. Microsoft has it; Apple does not.

It’s unclear if that gives the Surface Studio an edge over the iMac and positions Microsoft to take a bite out of Apple’s iMac revenue.

The Mac’s lack of touchscreen technology has been long-running discussion fodder, with some believing it makes zero sense, and others lamenting how it puts Apple at a disadvantage.

Mac users having to diagram, draw, paint, or sketch need to seek workarounds — such as graphics tablets — to compensate for their machines’ lack of touchscreens. Even the iPad has been retrofitted into a graphics tablet courtesy of apps such as Astropad that permit Macs and iPads to work in unison for visual, stylus-driven projects.

But while Apple has kept its non-touch Macs and its touch-focused iPads separate, PC screens have increasingly incorporated touch. This is most common on mobile machines, but it’s also true of many desktop PCs. In some cases, those screens are even designed to flatten on a desk or table.

The Surface Studio is therefore not breaking new ground, but it offers the most advanced such implementation yet. With the screen at its 20-degree angle, users can lean over the computer with their arms on the display while working with the stylus, and the Surface Studio is smart enough to ignore pressure from elbows and wrists.

The Surface Dial — when used with apps that support it — is a useful sidekick. In the app Sketchable, for instance, spins and presses of the dial provide instant access to color palettes and more. Alas, in my brief tests, the Surface Dial tended to slide down the tilted display, instead of sticking in place as intended.

My Surface Studio tests revealed another shortcoming that could be a deal-breaker for many potential buyers. That glossy display, when lowered to drafting-table mode, shows a reflection of the ceiling — which invariably incorporates lighting fixtures. What office does not have ceiling lights? How usable will a Surface Studio be under such conditions?

The Surface Studio does have a major supporter in Mike Krahulik, co-creator of the famed Penny Arcade Web comic, and a longtime Surface devotee. Writing as usual as his Jonathan “Gabe” Gabriel cartoon alter ego, Krahulik gave the Surface Studio a big thumbs-up after being allowed to use the PC for a week.

I’m a journalist, not a product designer, so I can’t answer those questions.

But I can’t deny that I felt a shiver of excitement when I used the Surface Studio for the first time. It was marvelous to use a computer that takes risks and pushes boundaries — though at an exorbitant price and with an, um, glaring shortcoming.

The 27-inch iMac with 5K Retina display is gorgeous, and a wonderful Mac, but it’s also a little boring. Apart from adding the Retina display and keeping up with CPU and connectivity specs, the iMac hasn’t really changed in years. If the Surface Studio is a hit with creative professionals, perhaps Apple will feel some pressure to think different again.

Comments About iMac Gets Competition from Microsoft’s New Surface Studio