If you’re using or considering buying one of the new MacBook Pro models with the Touch Bar (see “New MacBook Pros Add Context-sensitive Touch Bar,” 27 October 2016), be aware that some people are seeing their machines shut down repeatedly and unexpectedly. The problem might be with external hard drives connected via Thunderbolt 3’s USB-C ports, which is, of course, the only way to connect them.

I began researching this after I was unable to copy a large number of files from one external USB drive to another using my new MacBook Pro. The copy was going to take a long time regardless, but when I came back to check on its status, my laptop was powered off and I had to start it up again manually. Restarting the copy additional times resulted in similar shutdowns.

In my case, I was presented with an error message telling me about the shutdown, with the messages “CPU Machine Check Architecture Error Dump” and “CATERR detected! No MCA data found” in the highly technical error report that automatically gets sent to Apple. Long-time TidBITS contributor Jeff Carlson had similar problems, but he saw different error messages in Console, seemingly related to I/O errors. I now can get the same error message repeatedly when trying to do any large copy from one external drive to another, using either Apple’s USB-C to USB Adapter or an adapter from Aukey. However, I’ve had no problems copying from my internal SSD to a single
external drive, and likewise was able to migrate from that drive when I set up the MacBook Pro. 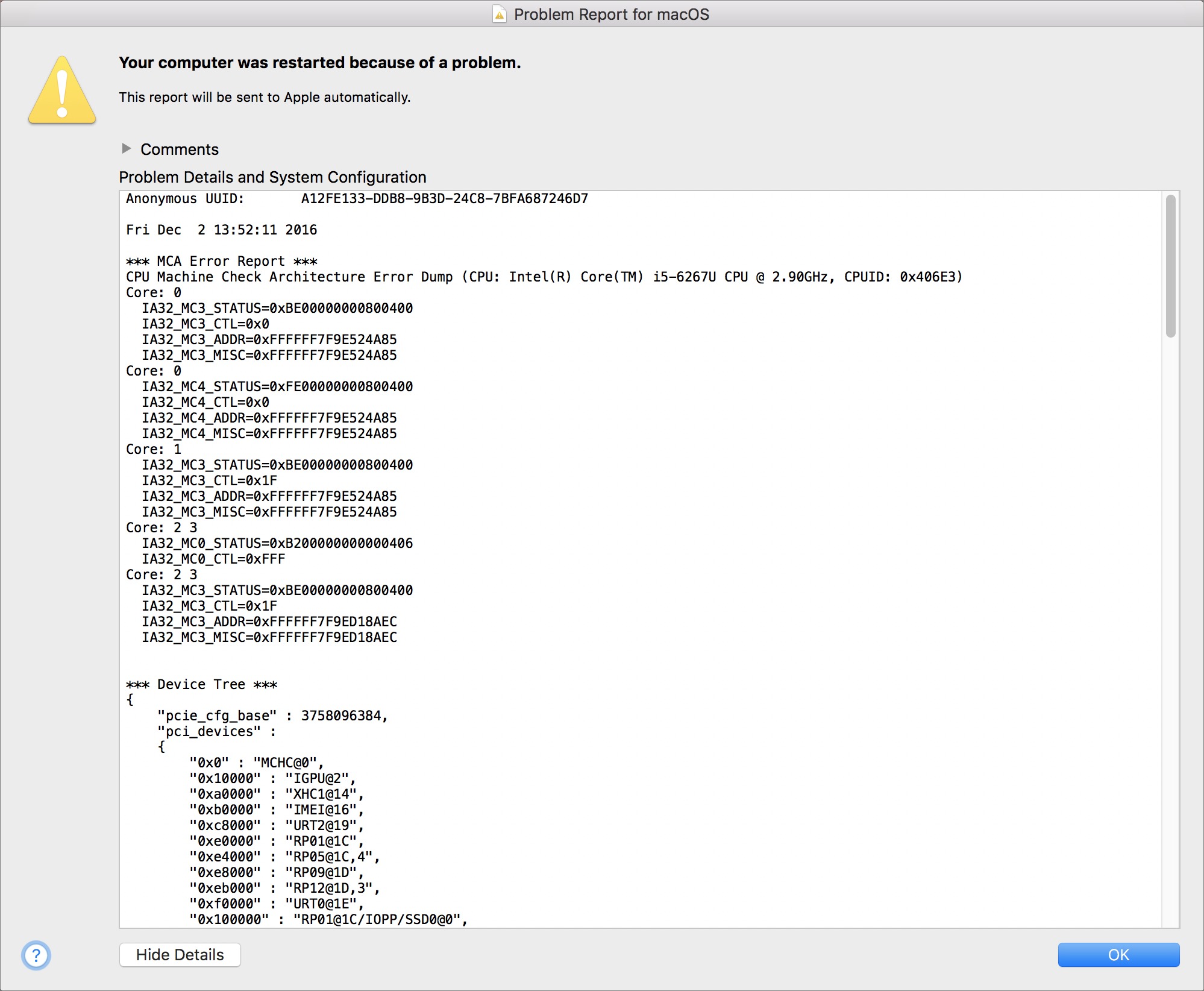 If your MacBook Pro is experiencing shutdowns when you’re not deliberately copying anything, the culprit might be Time Machine doing background backups to an external USB hard drive. A MacRumors forum discussion is the only place I’ve been able to find people complaining about this issue with the error messages I received, but they report that Time Machine is a particularly reliable method of triggering this problem. I was unable to complete a Time Machine backup during normal usage, but it finished fine overnight using the single-drive setup. Other people in the forum, however, are reportedly having problems with single
drives and even individual files.

Unfortunately, there’s nothing to say about a fix right now. AppleCare is not aware of this problem as a general issue — implying that it is likely restricted to a small subset of all the 2016 MacBook Pros — so if you’re running into this problem, you should set up a service call and let Apple know you’re affected.

It’s unknown if Apple could solve this problem with a software fix, or if it’s a hardware problem that would require replacement. I ran some tests with my external drives at my local Apple Store and was unable to replicate the crashes I saw at home. However, my crashes all came while using backup utilities, which I couldn’t test at the Apple Store; I used the Finder there with my external drives. But even after I managed to get my MacBook Pro replaced by my reseller, the problem persisted on my replacement machine.

The Apple Geniuses speculated that it might be related to USB power draw, and suggested that a future firmware update may be needed. This theory is supported by the fact that, on my replacement MacBook Pro, plugging in my Nexus 5X generates a “USB Accessories Disabled” error notification due to too much power draw, but still reports a 500 mA draw. When I reseat the cable in the same port, I get the same power draw without an error; if I try a different port, the error appears again.

If you already have several drives attached and everything is fine, you might not experience this problem at all. But if you’ve already had crashes:

If those precautions prevent you from making a decent backup and you’re not already using one, consider adding an online backup service (see “Backing Up Your Mac: A Joe On Tech Guide” for recommendations). It will likely take time to make an initial backup, but it’s worth getting started with an offsite backup anyway.