Those wanting to ditch pricey cable and satellite services have a growing number of alternatives offered over broadband connections, yet with programming options roughly mirroring those of traditional TV providers.

DirecTV Now, unlike traditional DirecTV, does not require you to install an unsightly satellite dish. Instead, upon signing up for any of several channel packages, you can watch your TV content on your Mac, iPhone, iPad, and some TV-connected streaming devices, including the Apple TV. If you don’t have an Apple TV, DirecTV Now is currently offering one for free to those making a three-month commitment. And if you get your cell service through AT&T, you can watch DirecTV on your iPhone or cellular-enabled iPad without it counting against your bandwidth cap.

DirecTV Now Basics — DirecTV Now provides an abundance of viewing options that might make it tempting to forgo traditional services, though it has certain glaring omissions – notably the CBS and CBS-owned CW channels, along with the Showtime premium channel. (CBS may be joining soon.)

You can choose from packages containing between about 60 and 120 channels – similar in selection to what cable users enjoy – along with premium channel offerings. There’s a 7-day free trial, too. Here’s how regular pricing breaks down: 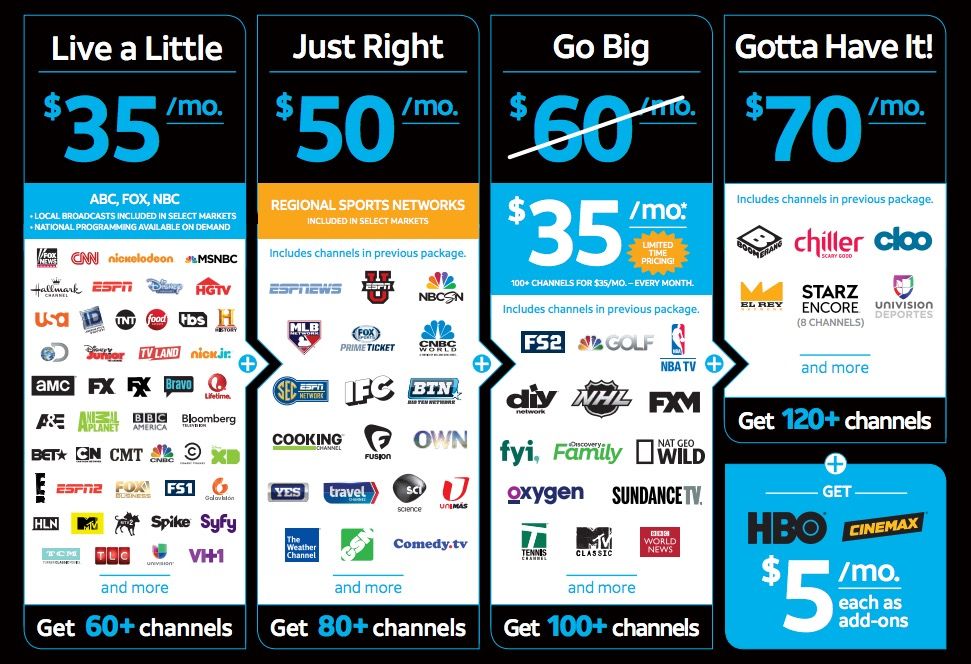 For a limited time, you can get Go Big for $35 per month, supposedly forever or at least for the foreseeable future.

HBO and Cinemax, the sole premium offerings thus far, each cost an extra $5 per month.

Even at the highest level, DirecTV Now subscribers may come in well under what one might pay for cable, which can top $100 per month.

DirecTV Now is a mix of live and on-demand TV – mimicking legacy cable and satellite services along with the likes of Sling TV. AT&T is launching the service with 15,000 on-demand movies and recently aired TV episodes.

Before scrambling to sign up, though, you should be aware of other DirecTV Now shortcomings. For instance, it lacks DVR capabilities, which are standard on PlayStation Vue and are being launched in beta form on Sling TV. AT&T said it plans to add a DVR option by next year.

Also, you can stream video on only two devices at once, which may limit DirecTV Now’s appeal in larger households. PlayStation Vue offers five simultaneous streams and Sling TV offers one or three streams depending on the channel bundle.

Live viewing of local channels varies with locale. Where I live in the Twin Cities of Minnesota, Fox is my only live local option. What’s more, you can’t view any NBC local channels live on mobile devices or TV streaming boxes in any area, only in a Web browser.

If you’re a sports fan, DirecTV Now boasts plenty of sports offerings, including ESPN and its offshoots along with the Golf Channel, NBA TV, Fox Sports, Tennis Channel, NBC Sports Network, NHL Network, and others. However, it lacks the NFL Sunday Ticket package and the NFL RedZone channel. A maddening number of other limitations might apply, depending on blackout rules and what regional sports networks you watch.

How does the DirecTV Now lineup compare to those of Sling TV and PlayStation Vue? CNET has the 169-channel chart you need.

Apple Apps — DirecTV Now works seamlessly on iOS devices and the Apple TV. Some minor issues arise on the Mac, where DirecTV Now runs in a Web browser, unlike, say, Sling TV, which has native apps for all of Apple’s platforms.

Mac users have to install Microsoft’s Silverlight software for DirecTV Now streaming to work. That’s somewhat troubling, since Microsoft stopped working on Silverlight in 2012, apart from patches and bug fixes, and doesn’t even support it in its new Edge browser for Windows 10.

On the Mac, Microsoft warns that Safari “may not be fully compatible” with its software. I did get it to work, but only after manually enabling Silverlight in the plug-in portion of Safari’s security settings. Everything worked fine in Google Chrome, but Mozilla’s Firefox was a total no-go.

Regardless of device or app, I repeatedly saw an annoying “error 60” warning. You’ll see this error if you try to use too many devices simultaneously – but I was using only one device at a time. Many others have encountered this glitch, and AT&T suggests shutting down all apps and starting over.

On the iPad, for instance, DirecTV Now offers a Guide button at the upper left and search and settings buttons at the upper right along with a simple toolbar at the bottom with Home, Shows, Movies, and Networks.

The Home screen shows sideways-scrolling strips with content that varies depending on the device. On my iPad, I had What’s On Now, New Shows, Returning Shows, Catch Up, Featured Movies, and more. 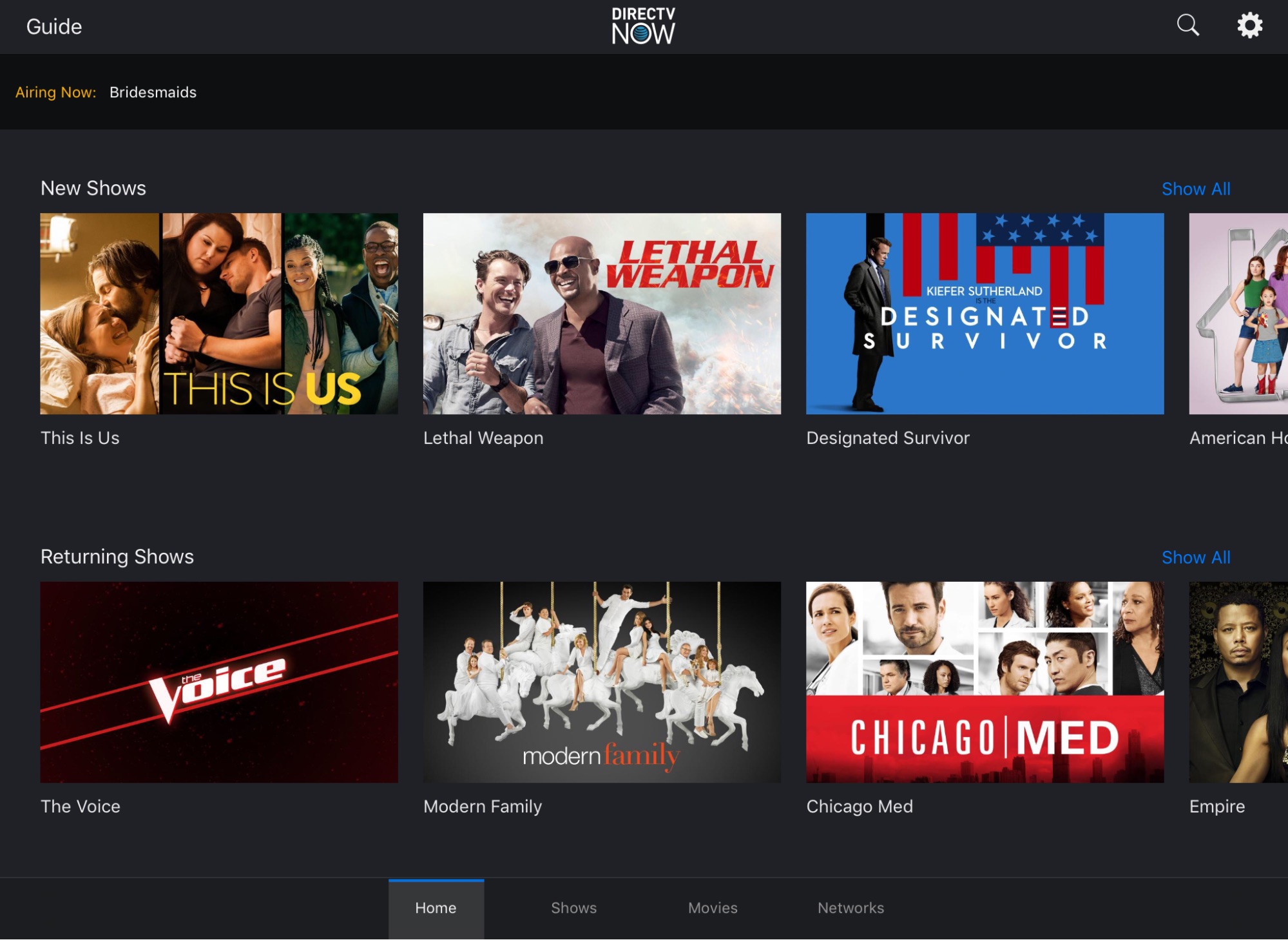 Likewise, the Shows and Movies screens display strips with thumbnails offering programming selections (along with a Show All link for access to additional content). 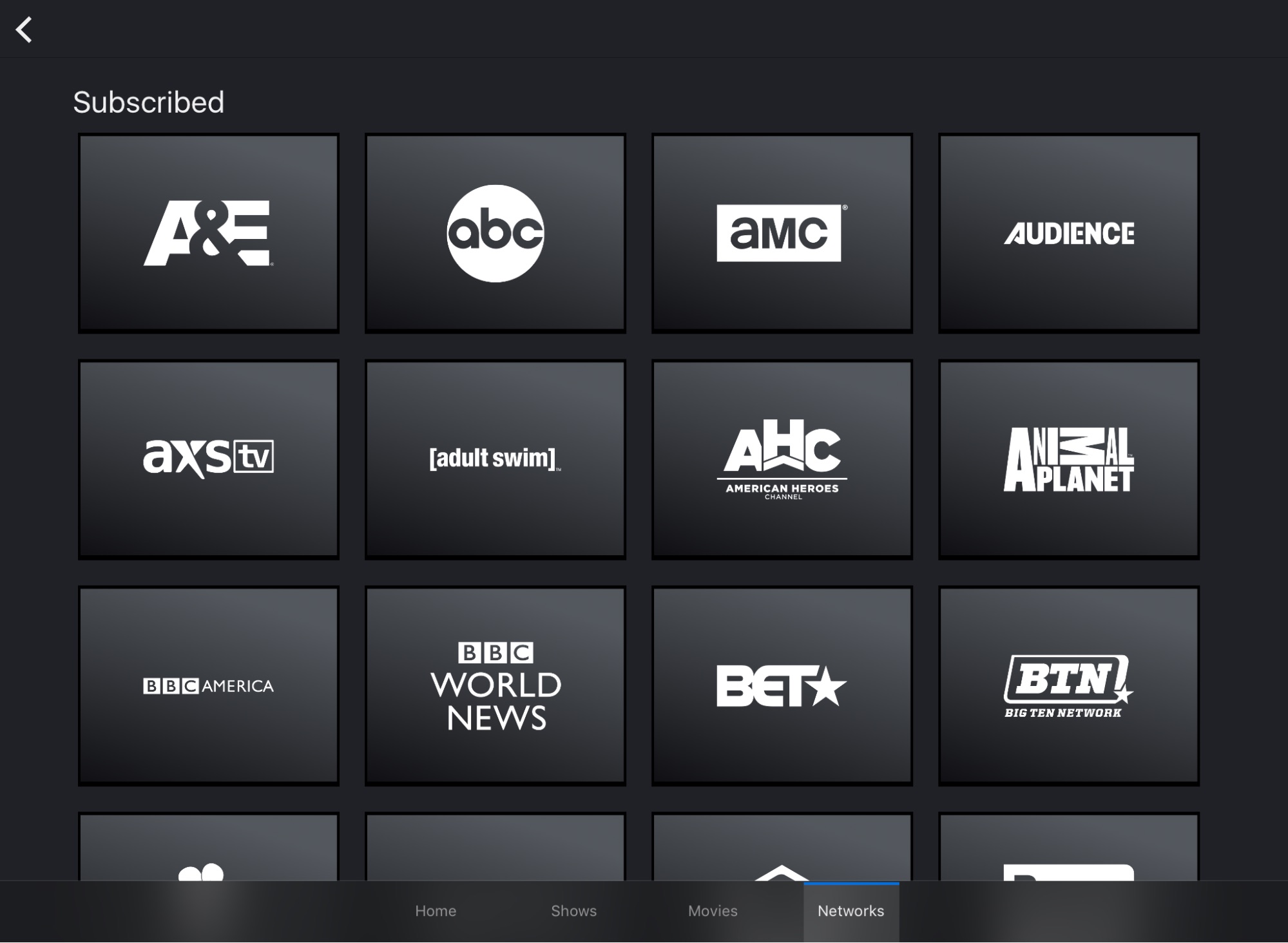 On the Apple TV, the DirecTV Now interface differs slightly. A finger flick upwards on the Siri Remote’s touchpad triggers a menu on the screen’s bottom with Home, Shows, Movies, and Networks, along with Guide and Search.

A downward flick on the touchpad – or a press of the Siri Remote’s Menu button – shows Live TV, Guide, Watchlist and Settings along the top of the screen, along with (again) an option to search.

When watching on-demand video on the Apple TV, sideways flicks on the touchpad rewind or fast-forward. When doing the same thing while watching live video, though, you move from channel to channel. You can pause live TV, but not rewind as you can on other services, such as PlayStation Vue.

Time to Watch — Once I worked through the aforementioned technical issues, I came to like DirecTV Now and it worked reasonably well for me.

Streaming was generally reliable, though with occasional stuttering and cryptic “trouble loading” messages.

The video quality usually looked decent, though hardly spectacular. It’s largely dependent on the source material, naturally, but it was invariably inferior to high-definition Comcast streaming and DVD videos.

Upshot — DirecTV Now’s ease of use and compatibility with iOS and Apple TV could well merit the attention of Apple users, particularly AT&T subscribers who like streaming video over cellular connections.

But DirecTV Now is by no means a cord-cutter slam dunk. It has stiff competition from the likes of Sling TV and PlayStation Vue. What’s more, traditional TV providers have made great strides in usability to compete. Comcast is my cable provider, and its recent upgrades, such as cloud access to my DVR recordings, have kept me from jumping ship — at least thus far.

The bottom line is that there is a battle for your TV-watching eyeballs going on right now, but none of the competitors has a clear edge. So if you’re thinking about dropping traditional cable for an Internet-based service, or you’re unhappy with your current service, compare prices and channel offerings carefully.