Now is an exciting time in the world of television. We’re seeing ever more options for cord cutters who want to watch live TV, such as Sling TV (see “Sling TV, a Cord Cutter’s Delight, Arrives on Apple TV,” 6 July 2016) and the new DirecTV Now (see “DirecTV Now Joins the Scrum of Cord-Cutting TV Services,” 9 December 2016). But at the moment, there’s a third service I prefer over both: Sony’s PlayStation Vue.

PlayStation Vue has improved rapidly since its debut in March 2015. Initially limited to just a few cities and even then only to those with PlayStation game consoles, the service is now nearly as ubiquitous as Sling TV, with clients for the Apple TV and iOS, plus Android, Android TV, Amazon Fire TV, Roku, and the Web (where it sadly requires Adobe Flash). 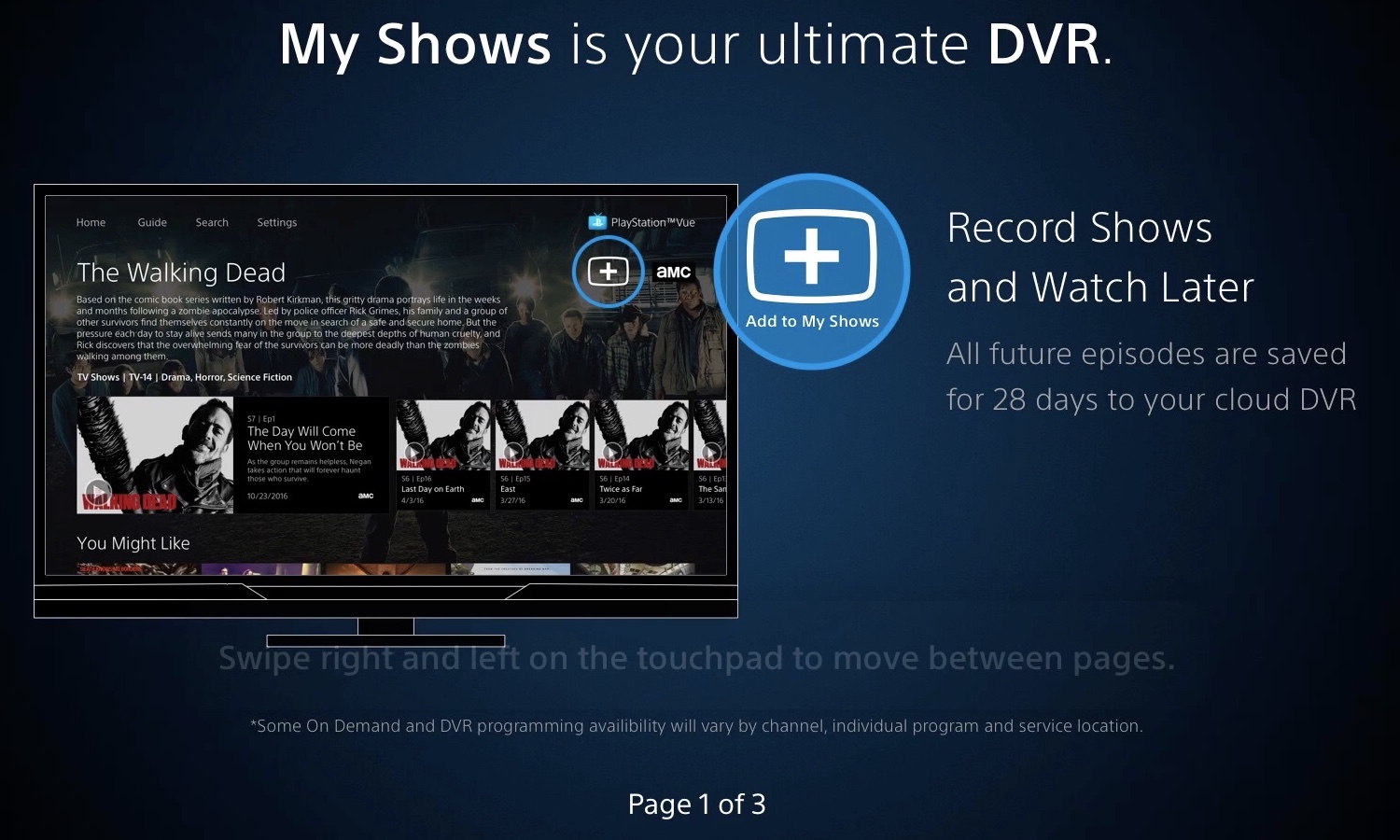 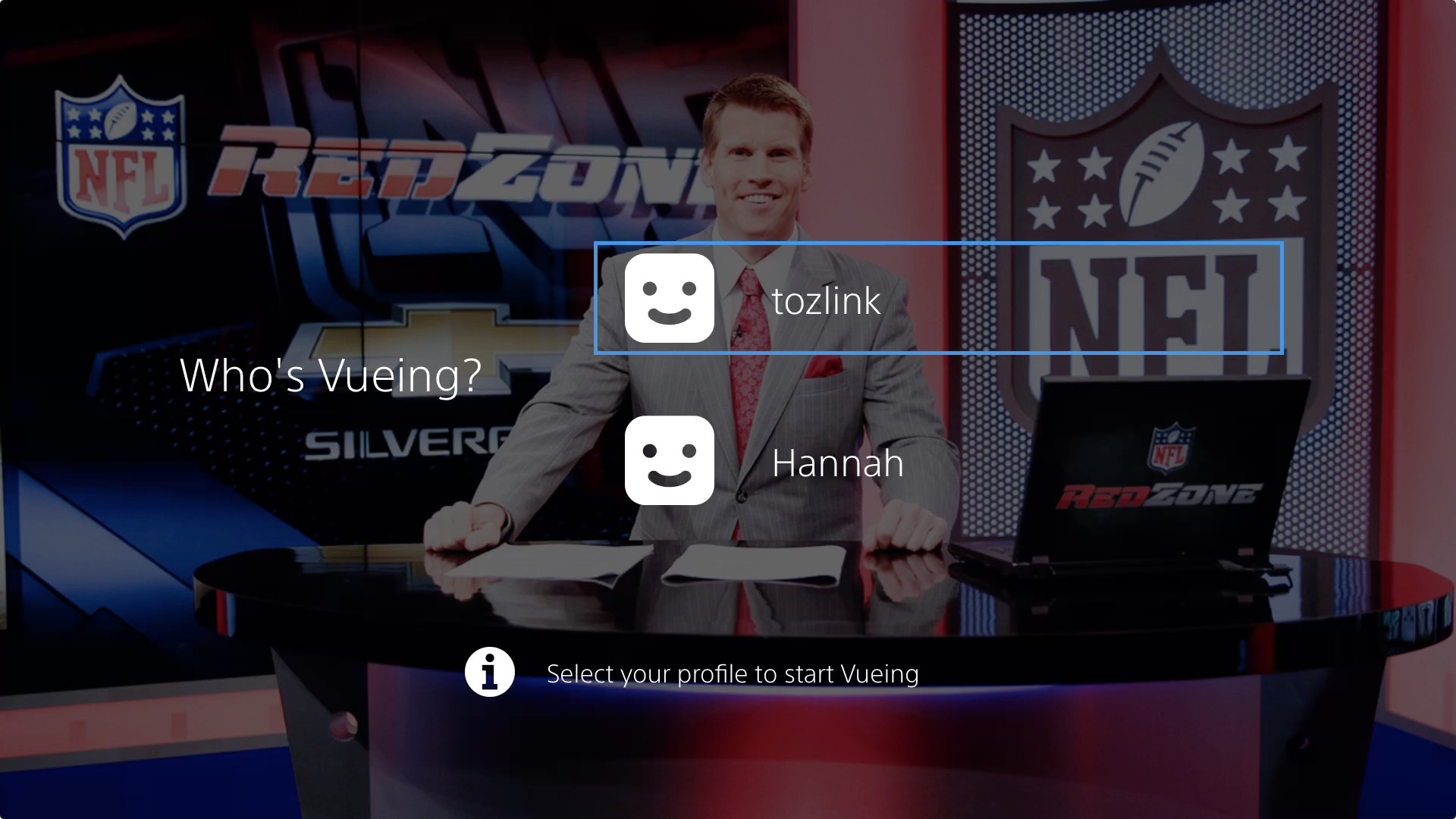 Seven Problems with PlayStation Vue — All that said, PlayStation Vue is far from perfect. Here are some concerns that I either have with the service or could imagine others having:

With those pros and cons established, let’s look at PlayStation Vue’s packages and interface.

PlayStation Vue Packages — I pay for live TV because of news and sports. Your needs may differ, but my rationale is simple: I can catch up with other shows at any time with a variety of services, such as Hulu, HBO NOW, and Netflix, but there’s an immediacy to news and sports that make them unique. For that reason, I focus mostly on news and sports when discussing packages.

I don’t have room to list every channel in every package here, so I encourage you to explore the options on the PlayStation Vue Web site. Standbys like AMC, Cartoon Network, Disney Channel, Food Network, FX, FXX, SyFy, TBS, TNT, and USA are all included in every package.

PlayStation Vue is split into four oddly named plans, each of which is available with the 7-day free trial: 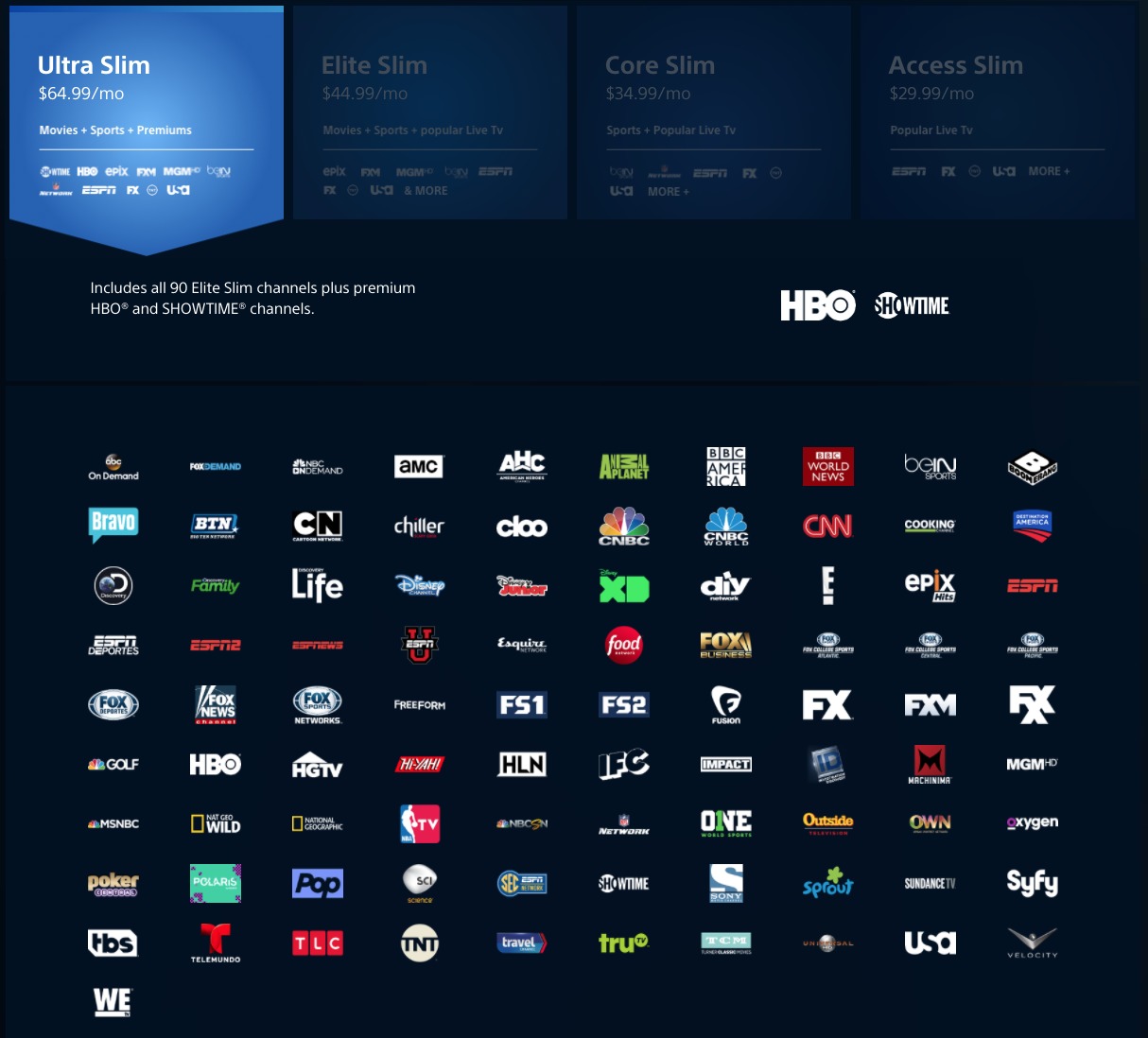 How does the PlayStation Vue lineup compare to those of DirecTV Now and Sling TV? CNET has the 169-channel chart you need.

One last note on programming: since PlayStation Vue includes FXX and it activates the FXNOW app for various platforms, that means you gain access to Simpsons World inside FXNOW, which lets you watch every single episode of “The Simpsons!”

PlayStation Vue’s Interface — I’ll focus on the Apple TV app here, but the interface is largely the same on other platforms. (That said, Sony tweaked the Web interface after I initially drafted this article, breaking PlayStation Vue up into genre-themed sections, so bigger interface changes may be coming to all platforms.)

PlayStation Vue’s interface is split into four screens: Home, Guide, Search, and Settings. The last two are what you’d expect, while Guide presents a somewhat traditional grid-based guide. However, it’s flipped from the standard setup, with the columns being channels and the rows being showtimes. I don’t understand why Sony laid things out this way — it’s just confusing. 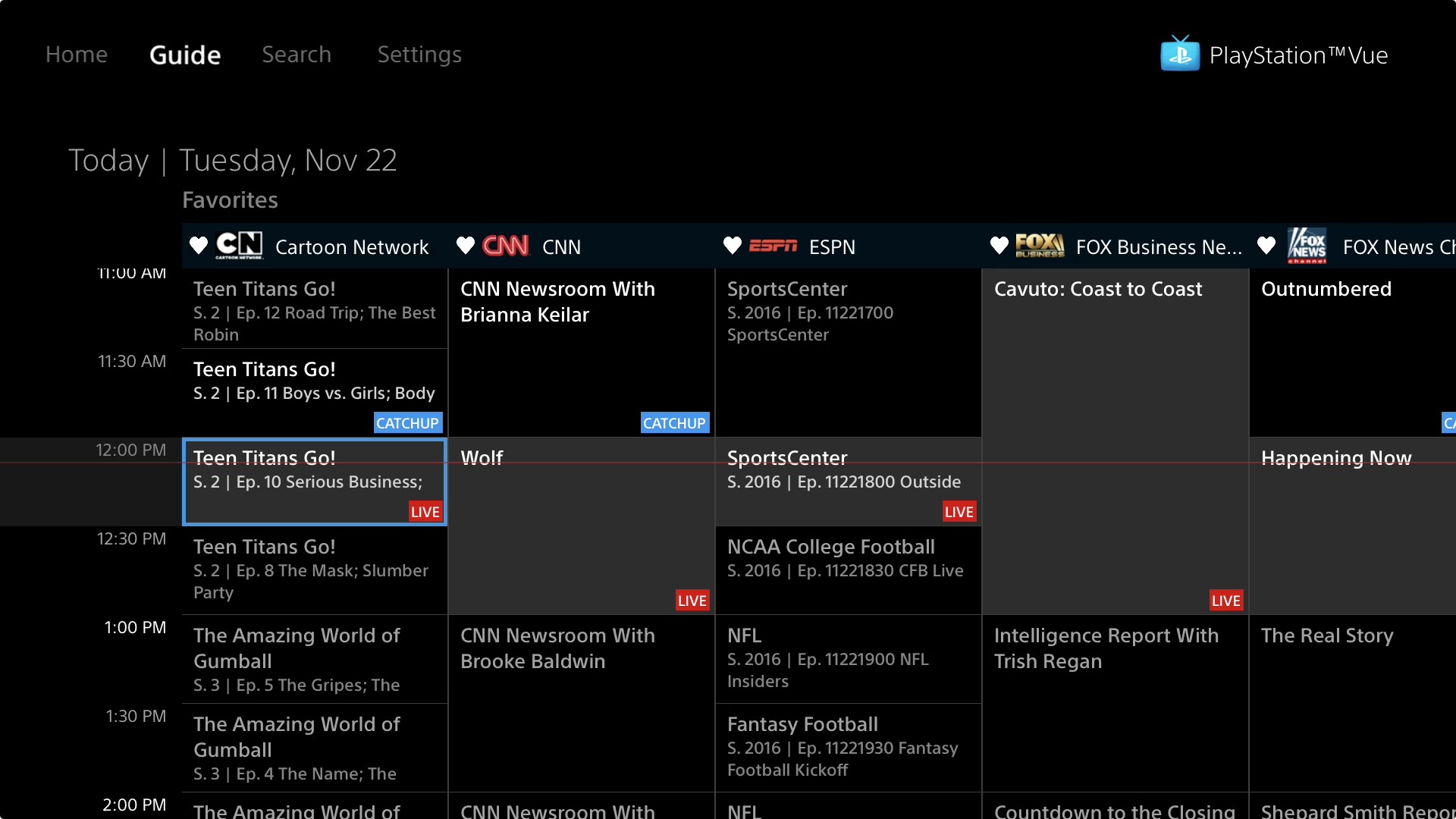 But the main screen you’ll interact with is Home, which has six sections: 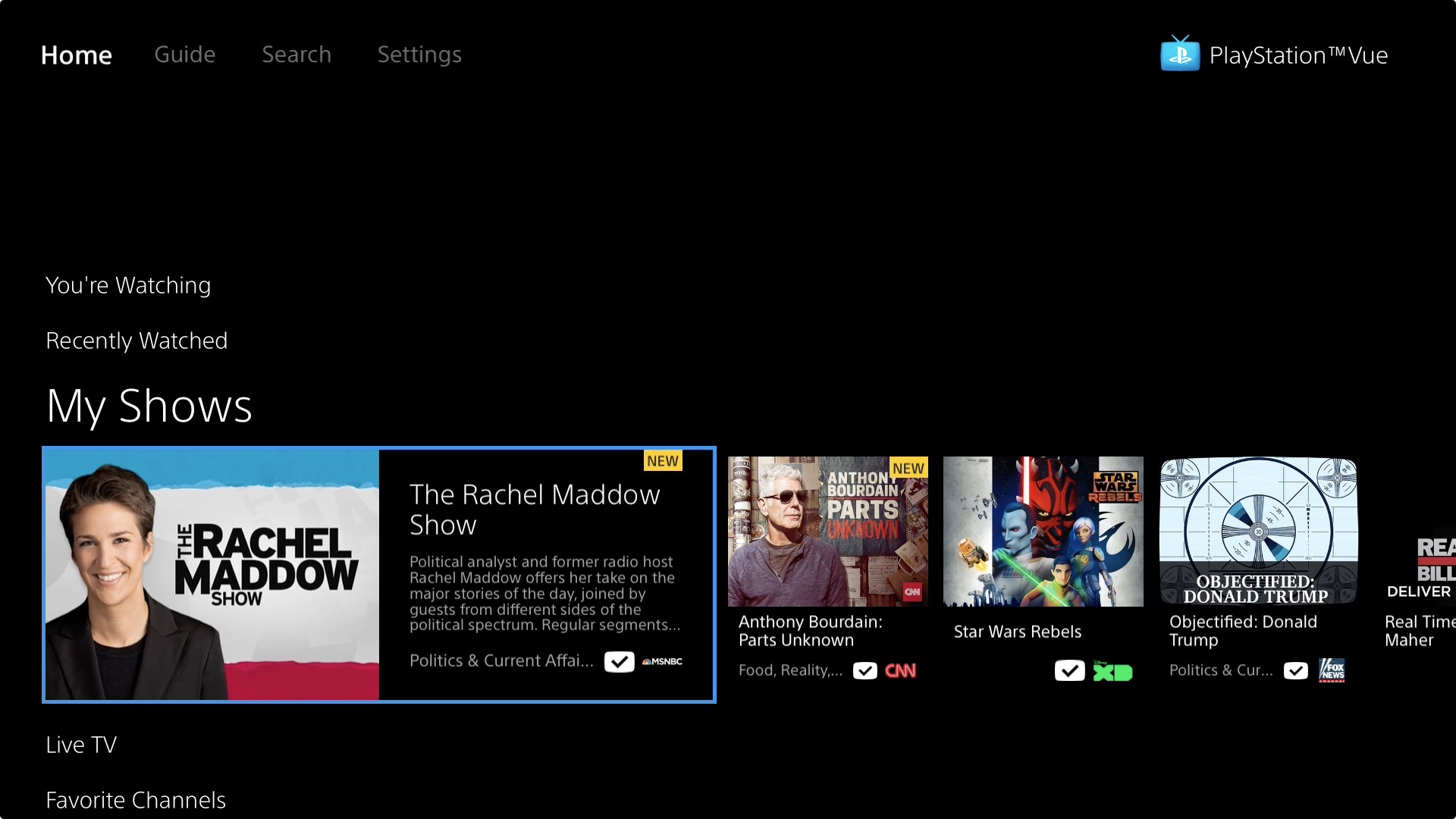 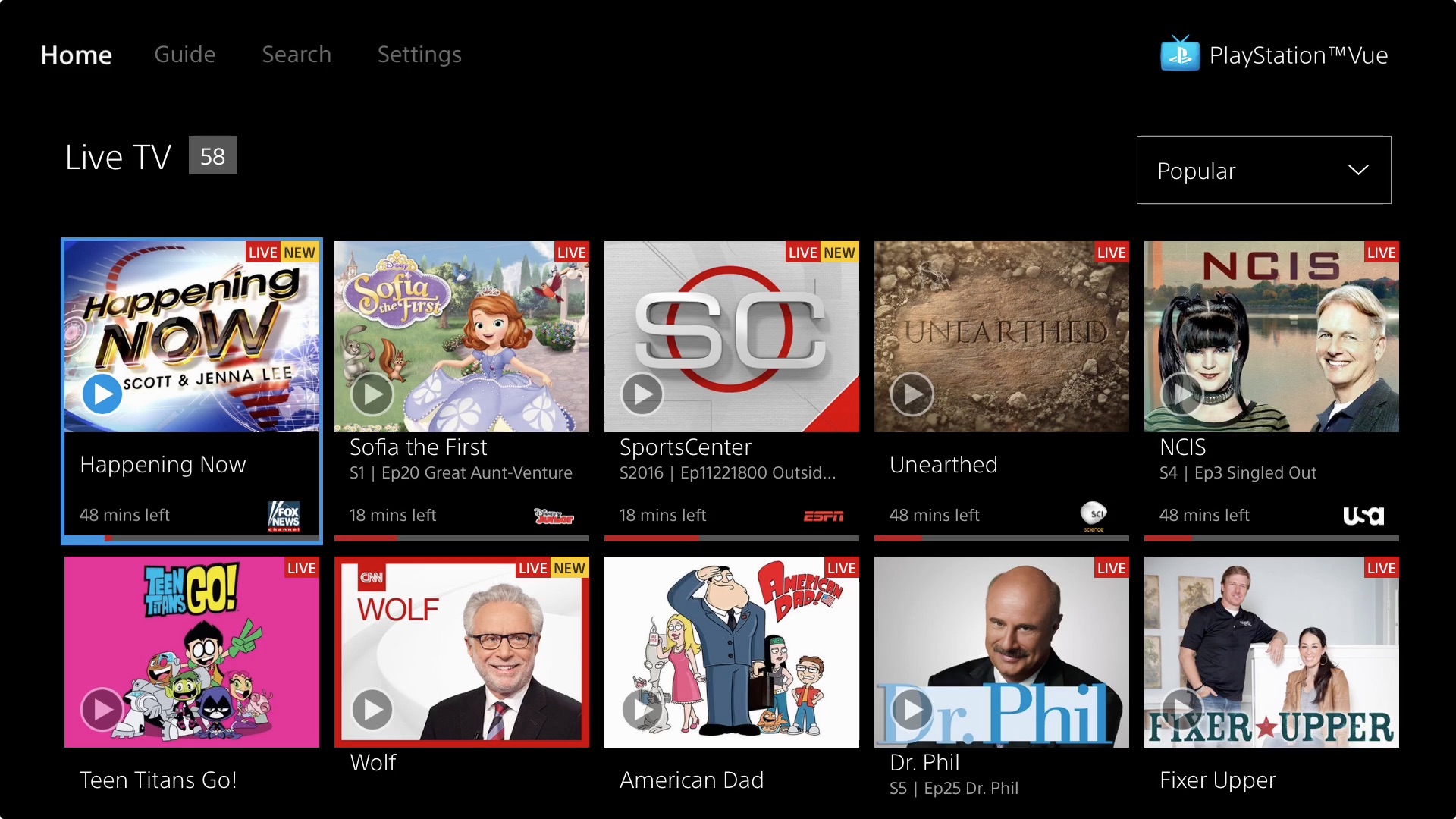 Different platforms sometimes offer additional choices. For example, the iOS app has a Recommended for You screen, as well as an Explore screen to browse content.

While watching a program, you can access a menu with more options. To do that on the Apple TV, swipe down on the Siri Remote’s touchpad. In iOS, tap in the viewing area. In the Web client, move your cursor into the viewing area.

People seem to either love or hate PlayStation Vue’s interface, but the DVR functionality is spectacular. You don’t have to worry about managing space or picking which episodes to keep. Just add it to the list and every episode is saved for up to 28 days.

A Living Room with a Vue — I’m a fan of PlayStation Vue. The interface isn’t bad (better than Comcast’s, in my opinion), it’s reliable, and the quality and price are good. Unfortunately, since broadcast channels aren’t yet available in my area, it can’t totally replace cable for me, because those are essential for local news and sports. But PlayStation Vue could replace cable for you if you don’t need broadcast channels or live close enough to the broadcast area that you can use a cheap indoor antenna.

We live in a golden era for TV choice. You’re no longer limited to broadcast, cable, or satellite, and there are now three of these Internet TV services to choose from: Sling TV, PlayStation Vue, and the new DirecTV Now. It’ll be fascinating to see how each of these players responds to an increasingly competitive market.

The catch for many people will be bandwidth caps. Most Comcast customers now have a 1 TB monthly bandwidth cap that limits how much video they can stream (see “Comcast Raises Monthly Data Cap to a Less Insulting 1 TB,” 29 April 2016). That’s not even considering mobile bandwidth caps, which are far more restrictive.

The other issue is that these services still have to adhere to the terms set by the content owners, most of which have been shaped by the cable companies. Those terms account for some of the odd restrictions you see with streaming TV services.

It will undoubtedly take a long time for the market to sort itself out, but these new services are a step in the right direction for giving us all more choice at lower prices.