Initially promised for late October 2016, the AirPods are finally here. Were they worth the wait? My short answer: yes, for the most part. In other words, in honor of a Star Wars movie that recently hit theaters: these are the pods you have been looking for (if you can live with their steep price).

Apple announced the wireless variation of its iconic EarPods on 7 September 2016 (see “W1-powered AirPods Usher in a New Era of Wireless Audio,” 7 September 2016), partly to tamp down the fuss over the missing headphone jack on the iPhone 7. Apple was essentially saying, “Forget that jack, here’s a better way,” and promised them for late October 2016.

The company had to delay the release of the AirPods until December for undisclosed reasons. They finally became available for online orders on 12 December 2016 and hit Apple Stores a week later. Within a day, they were backordered for 4 weeks online, and Apple is now promising to ship new orders in 6 weeks.

Apple sent me AirPods to test, and I’ve been using them heavily since. Overall, I’m delighted with them.

Look and Feel — These white AirPods look just like EarPods – except they’re cordless. The part that fits in your ear is the same. But, instead of having white audio cables draping downward, the AirPods end in silver-tipped, somewhat inconspicuous stalks. 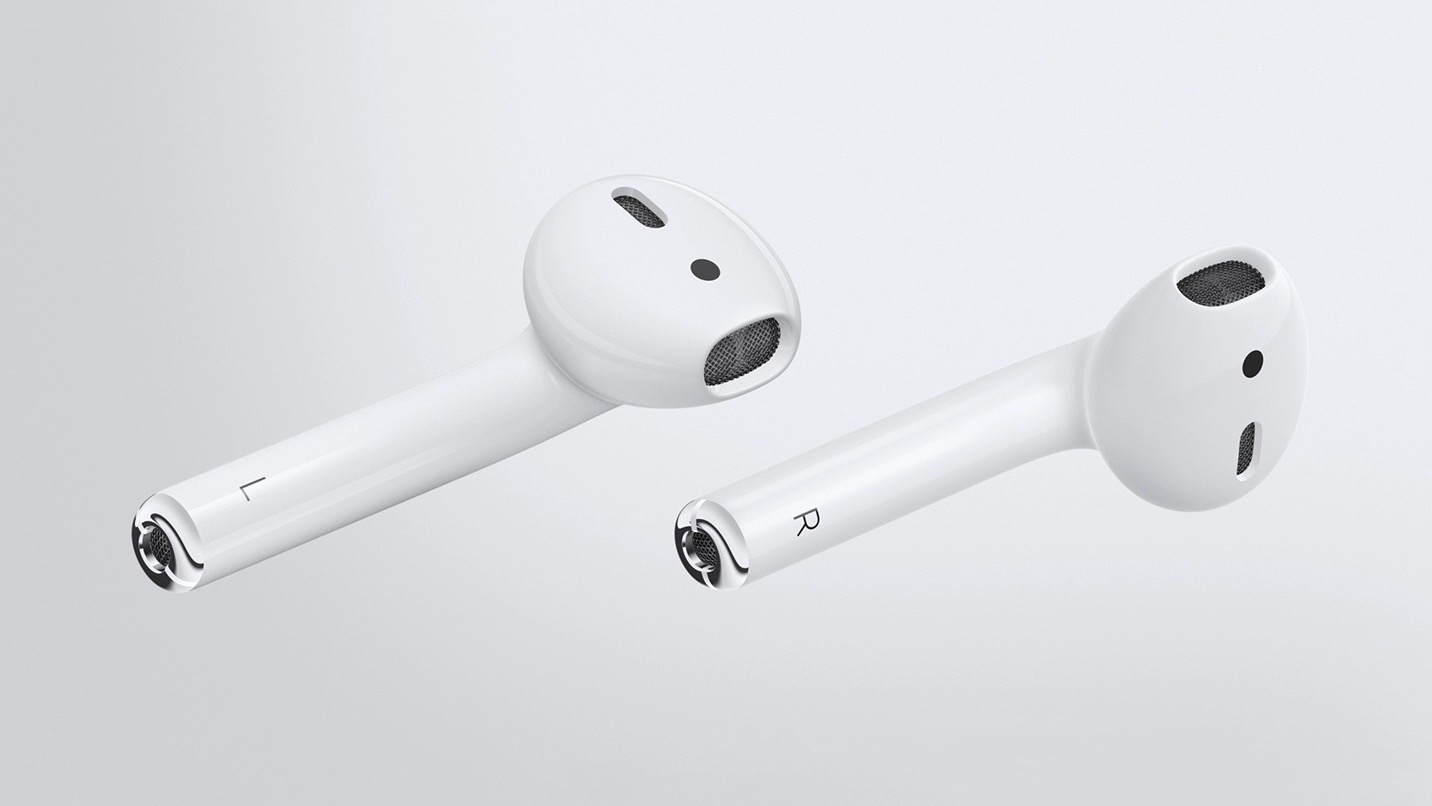 The AirPods feel great in my ears and stay in place well. All ears are different, so your mileage may vary. But I had much more trouble with the older EarPods falling out, likely due to the weight of their cables.

Charging Case — When you aren’t using the AirPods, they tuck into a handsome little charging case. The lid of the case snaps shut magnetically, and the AirPods snap into the holes in the case magnetically. 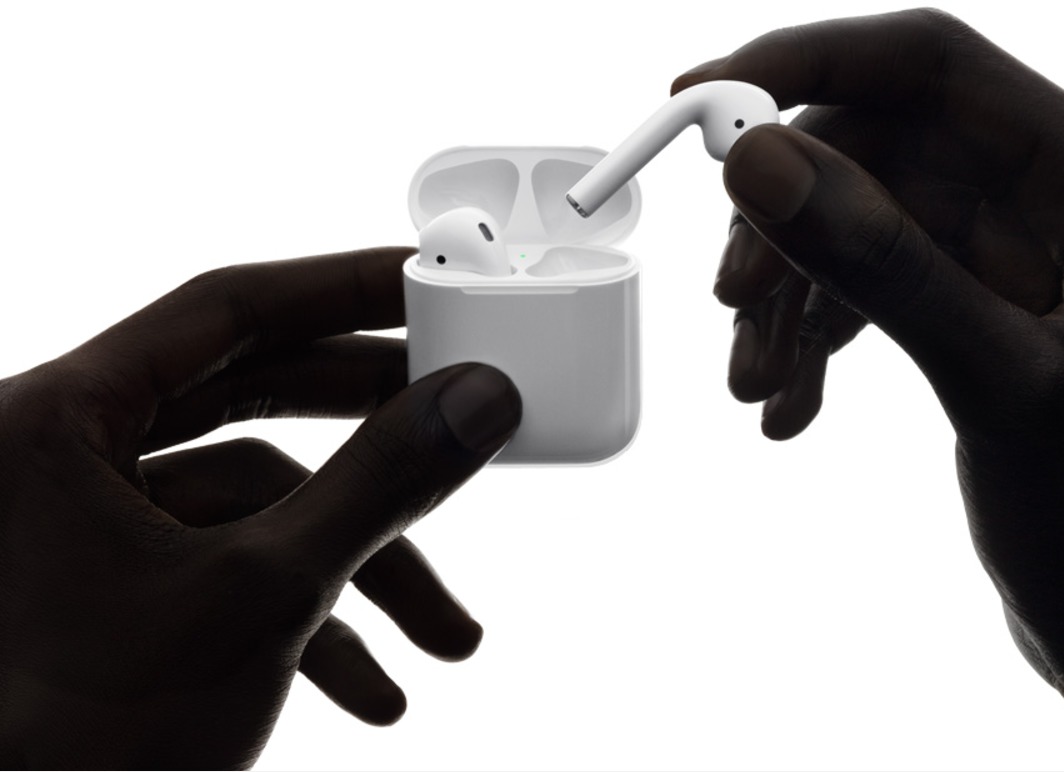 A Lightning cable plugs into the bottom of the case for charging a battery in the case. A light between the AirPod holes shines orange during charging and green when topped up.

Apple claims that the AirPods last for about 5 hours of listening time or 2 hours of talk time on a single charge, and my testing so far seems to confirm that.

If you have drained both the case and the AirPods, charging them fully takes about 2 hours, according to Apple.

Bluetooth — The AirPods rely on Bluetooth, as numerous other audio accessories do, but Apple has refined the standard Bluetooth experience with the addition of the company’s new W1 chip. It’s designed to optimize wireless connectivity, audio quality, and battery life.

Initial pairing is painless. When I opened the charging case, the AirPods and my iPhone could instantly see each other. A set-up process ensued via an attractive animation; I tapped Connect and then Done. That’s it. Pairing other Bluetooth accessories is rarely so simple.

AirPods in Use — The AirPods lack a power button but switch on automatically when you remove them from their case. Put them in your ears, and you’ll hear a tone to indicate they are ready. Choose the AirPods as an audio output on your device, press Play in an audio app, and audio starts, though there is sometimes a short delay before playback begins. When you take one of the pods out of your ear, audio pauses, and it resumes if when you put it back in — handy when someone needs your attention.

The sound quality is good but not fantastic, much like that of the EarPods. Using just one pod further diminishes audio quality, though it’s good enough for listening to a podcast while doing the dishes, or when you need one ear open for safety while biking, running, or driving.

Double-tapping one of the AirPods can make different things happen. The default setting activates Siri or answers an incoming phone call. You can change the behavior in Settings > Bluetooth to use double taps for pausing and playing. Tap the i icon next to your AirPods to see these settings.

The Siri double-tap option is a mixed bag. Once you invoke Siri, you can perform tasks like skipping to the next track or adjusting the volume.

Beyond that, functionality is inconsistent, and it’s dependent on what app you’re using. In Apple’s Music app, for instance, you can ask Siri to start a song over. I use Google’s Play Music app, however, and restarting a song isn’t possible there.

It’s especially frustrating when Siri doesn’t work like it should, because the AirPods have no physical controls. Volume and playback controls all rely on Siri, which in turn depends on an Internet connection. If you’re offline, you’ll have to control volume and playback on your device manually. That’s something Apple needs to fix, since Siri’s predecessor, Voice Assistant, didn’t require an Internet connection to do these things.

Voice Calling — Phone calls also work well on the AirPods. When making cellular calls, the people on the other end of my voice chats said I sounded fine, and their voices sounded OK to me. Again, audio quality with the AirPods is never spectacular.

The AirPods’ reliability as a phone accessory is a big deal since I have had poor luck using other Bluetooth accessories for cell calls. Often, I am told I sound terrible, and I have to pick up my iPhone to continue the conversation.

The audio quality when making Internet-based voice calls with the AirPods can be inconsistent, however.

I ran through a battery of VoIP-call tests with Josh Centers using FaceTime and Slack. Our general takeaway is that such calling is unpredictable. Voices sound clear at times, muffled at others. Sometimes there’s a subtle but distinct hiss in the background, sometimes not.

We appeared to nail down one big bug: an awful jackhammer-like sound ensued when either of us attempted to initiate a voice call on Slack from an iPhone.

Multi-device Support — It’s easy to use AirPods with multiple Apple devices, assuming they are all logged in to the same iCloud account. Set up the AirPods with one iPhone, iPad, or Mac, and they’ll be ready to go on all your iOS devices and Macs.

On a Mac, you choose the AirPods as your audio output device in System Preferences > Sound or via the Sound or Bluetooth icons in the menu bar. On an iPhone or an iPad, swipe up from the bottom for Control Center, and then swipe from right to left for the audio controls. An icon at the lower left presents audio output options, including any connected AirPods. 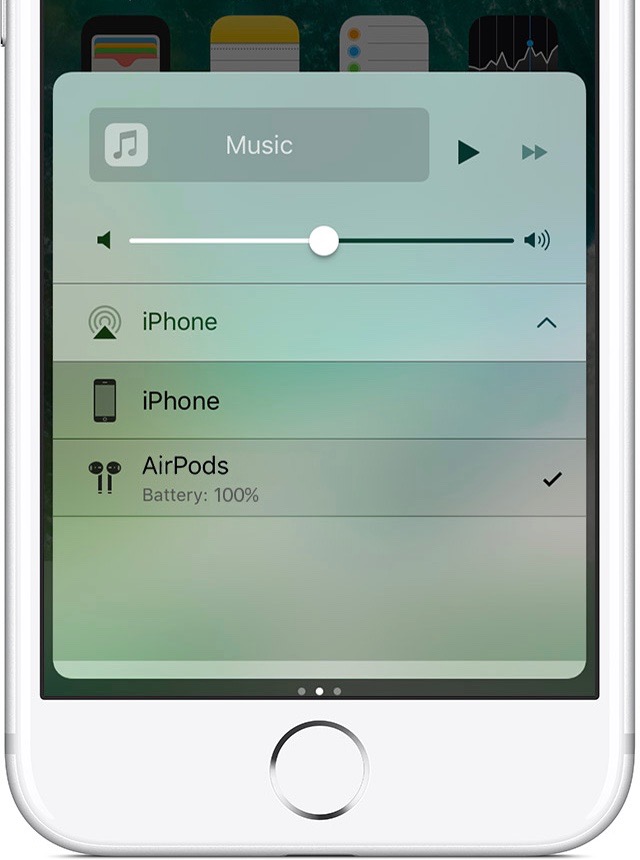 Switching among my iPhone, iPad, iMac and MacBook Pro was generally seamless. However, on a few occasions, an iOS device on my iCloud account seemed to forget about the AirPods’ existence, forcing me to re-pair with that device manually. Josh had and resolved a similar problem; see “How to Fix Connection Problems with the AirPods” (21 December 2016).

There are other oddities. Decent-sounding Mac audio through the AirPods degrades suddenly and alarmingly when I go into the Sound preference pane and select the Input tab. One time when I did this, playback of the movie “Batman vs. Superman” in iTunes cut out, with strange interference through the AirPods, and the Mac forgot its place in the movie!

It seems that the AirPods downgrade their output sound quality to free up Bluetooth bandwidth for the microphone input, and that can also result in some unintended quirks. Happily, this was an isolated incident during otherwise solid multi-device support, which is a big deal since other Bluetooth accessories are usually a hassle to use with multiple devices.

If you have an Apple Watch paired to the iPhone that you’re using with your AirPods, they also connect to the watch, and sound switches automatically between phone and watch. When I answer a phone call on the Apple Watch, for instance, the caller’s voice comes through the AirPods. 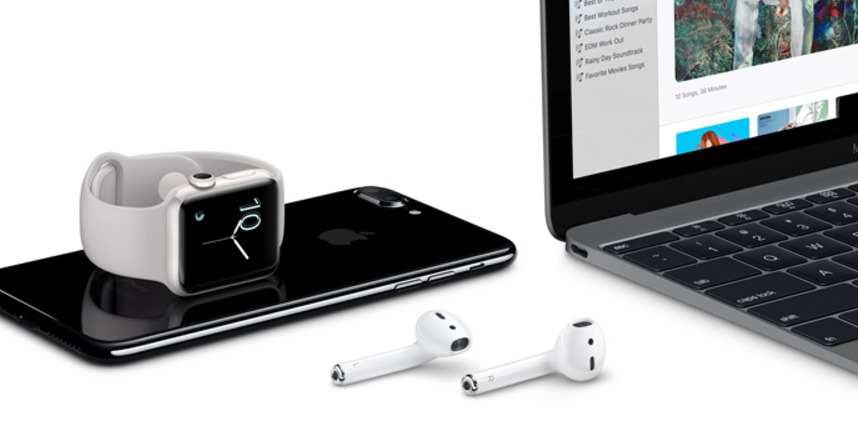 Josh, who wrote the recently updated “Take Control of Apple TV,” did some testing with the Apple TV as well. After pairing the AirPods in Settings > Remotes and Devices > Bluetooth, you just need to return to that Settings screen and choose the AirPods to connect them. There’s no need to disconnect them manually, because when you connect to them from a natively supported device, they’ll disconnect from the Apple TV automatically.

Non-Apple Devices — What if you want to use your new AirPods with a device not manufactured by Apple?

The good news is that AirPods do work with non-Apple gear — they are Bluetooth accessories, after all — but using them is more of a hassle.

For starters, the setup drill is different. There’s a tiny button on the back of the AirPods’ charging case. With the AirPods in the case, press the button until the little light between the pods begins to blink white. That’s your cue to look in Bluetooth settings on your Android handset or Windows PC for the AirPods to appear in the device list.

I tested pairing on a Windows-based Microsoft Surface Pro notebook and three Android handsets — a Samsung Galaxy S7, a Google Pixel, and a Lenovo Moto Z — with no major issues.

The AirPods are far less convenient outside of the Apple ecosystem. If you want to switch your AirPods from one non-Apple gadget to another, you must unpair the AirPods on the first device before pairing with the second one. That is, the AirPods behave like standard Bluetooth accessories, with none of Apple’s secret sauce. However, you don’t have to unpair manually before connecting to a natively supported Apple device.

Worth the Wait and the Price? — Why the AirPods were delayed for so long may forever stay a mystery, but I’m glad Apple took its time to get it right. iFixit suspects that the delay was due to poor solder joints in the charging case.

The AirPods are, on balance, the best Bluetooth audio accessories I have tested with the iPhone. Other devices may offer higher quality audio playback, but the AirPods are by far the best I’ve used for voice calls. Pairing ease is a big plus, and being able to migrate seamlessly from Apple device to device is a bonus.

The AirPods’ biggest shortcoming may be their cost: a pair costs $159, and replacement pods will set you back $69. Many Bluetooth earbuds are available for a fraction of the price – though without Apple’s technical refinements.

Arguably, you get what you pay for, however. Until the AirPods came along, my favorite Bluetooth earbuds came from LG. The different models wrap around the neck, with the earbud cables coming out the front. Their sound is terrific, but the price starts in the AirPods’ territory and goes up from there. You can save some money with LG earbuds of a more standard design and pricing right around $100.

The successful design and high price of the AirPods actually lead to a few other concerns. First, they fit in my ears so comfortably that I forget I have them in, and I’m a bit scared that I’ll inadvertently take them into the shower (they aren’t officially water-resistant, but they seem to hold up in unofficial tests).

Second, I worry about losing them since they’re so small. To reduce that likelihood, I’ve installed the case on a spare Apple Lightning dock alongside my iMac, turning the AirPod kit into a desktop charging station of sorts. 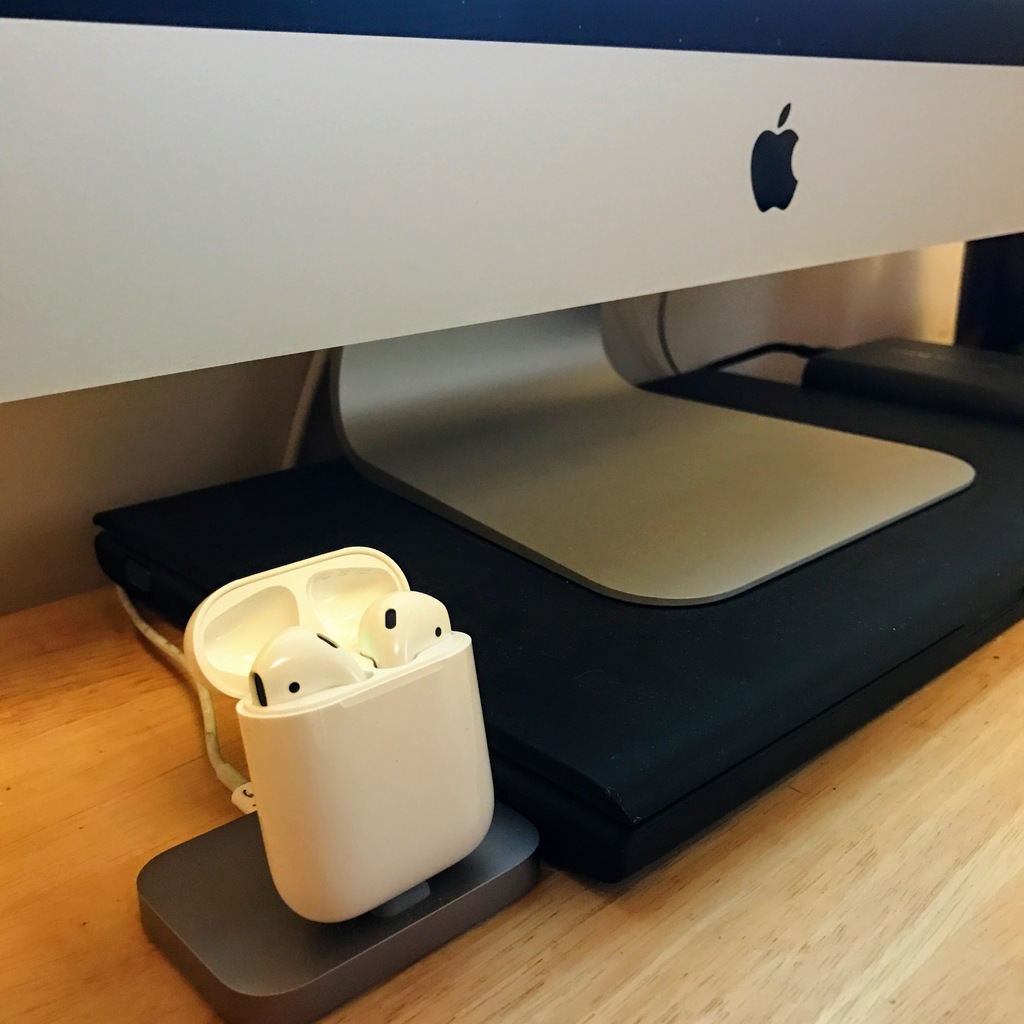 These personal insecurities aside, I’m thrilled with the AirPods. I’ve long daydreamed about having an Apple audio accessory this reliable and convenient – and it’s now a reality.

Comments About Apple’s Wireless AirPods Were Worth the Wait