CES kicks off with two days dedicated to press events. The show floor opens on Thursday, but Tuesday and Wednesday are media days, with breakout show floors for a “select” group of exhibitors willing to pay a lot of extra money to be at these additional shows, where the media are wined and dined with open bars and awesome hors d’oeuvres.

In contrast, from Thursday through Sunday, we in the media trudge across 2.6 million square feet of show floor, waiting in line with 100,000 other people for $8 hot dogs and overpriced Starbucks.

So news from CES “opening” is really from CES Unveiled, the early breakout event run as part of CES itself. I’ll be attending two similar events run by other organizations, and I’m separating out my coverage of these events so you know who’s getting attention because they paid extra to be at one of these press shindigs, and who’s catching my attention on the show floor. (To be fair, the primary reason I attend these media events is that they’re good for generating stories, despite the hype.)

Sevenhugs Smart Remote — It could be the one remote to rule them all. Looking like the love child of your TV remote and an iPhone, the magic of the Smart Remote is that it figures out what device you’re pointing it at, and automatically shows you the proper controls for that device. You can program it to assign certain tasks to objects, so pointing it at the door can call you an Uber, or you can use the fireplace as the target when you want to control the thermostat. Currently on Indiegogo for $229 with an estimated ship date
of August 2017; pre-orders are also being taken on the Sevenhugs Web site for the same price. It will retail for $299. They had a working model on the show floor. 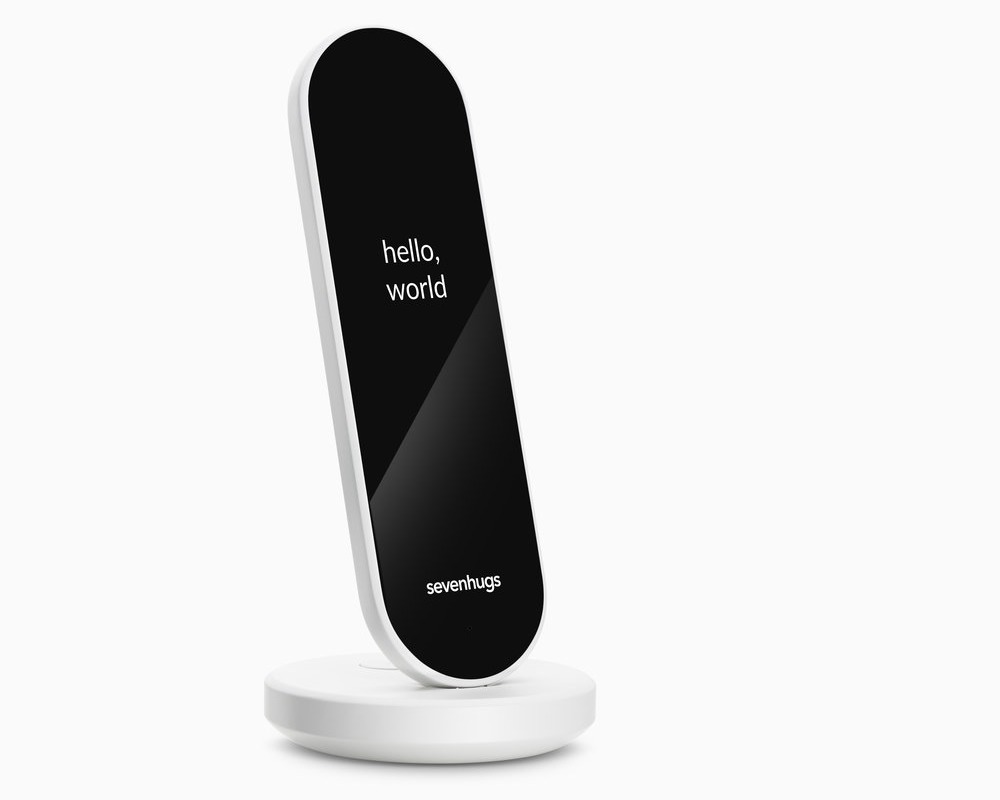 Dring Smartcane — Need help getting around and worried about falling? Dring’s Smartcane is a walking stick with a button that calls for help, a GPS so your family knows where you are, and fall detection. I don’t know if that qualifies it as “smart,” but it could be useful for some people. Pricing isn’t set, but will reportedly be “less than $100” and “less than $10 per month” for service. It’s due in Europe in September 2017, and in the U.S. sometime later. Perhaps it will also conceal a rapier. 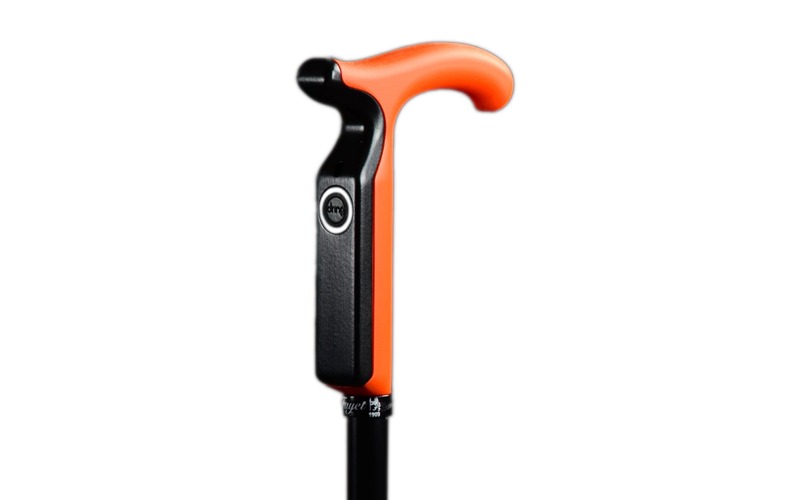 Moen U — The Moen U wins the prize for “I thought of this three days ago and wondered why it doesn’t exist yet.” While I was fiddling with my home shower to get a non-scalding, non-freezing temperature, I wondered why we put up with such crude controls in the 21st century. Voila! The Moen U has a digital setting, and you can set the temperature in the shower or from your iPhone (best done before you get in). Like so much else at CES, it’s “coming soon.” Since I rent my home, I had no idea that regular people can just buy showers, so I neglected to ask about pricing initially. I later learned that the 2-outlet shower costs $1160 and the 4-outlet shower is
$2200. There’ll be more information upon release at Moen’s Web site, which has an introductory video in the meantime. And if there’s any Internet of Things device that needs good security, it’s clearly this one — no one wants their shower hacked (brr!) or their hygiene habits publicized.

Motiv Ring — Motiv caught my eye with the first story for why a wearable that isn’t a watch might be useful: sleep tracking. Wearing my Pebble at night to track my sleep is annoying; this waterproof titanium ring seems much less obtrusive. It also offers the standard array of fitness tracking metrics: heart rate, distance, steps, and caloric estimates; it syncs to a free app for the iPhone. It’s available for $199 as a pre-order from Motiv, with shipping in “spring” (that’s in the northern hemisphere, as with other seasonal ship dates I’ll mention throughout these CES articles). 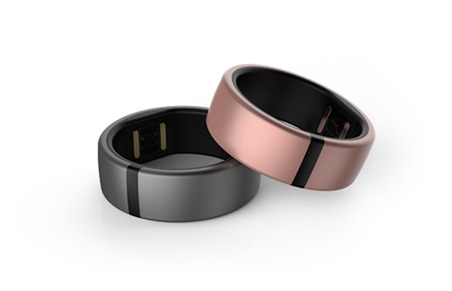 Arovia SPUD — The Spontaneous Pop-Up Display is exactly what it says on the tin: a 24-inch monitor that collapses to the size of a really thick paperback book and weighs less than 2 pounds (1 kg). Fully expanded, it’s reminiscent of the shape of a Bondi blue iMac. Screen quality was not perfect; the screen display isn’t quite flat and balloons out at the edges a bit. But if you’re the type who wants to take a big external monitor on the road, it could work for you. It’s $399 from the company’s Indiegogo campaign and is promised for August 2017. Here’s a video demo.

Mohu’s Untangle.tv — Untangle.tv is a Web app that polls you for your location and current TV budget, asks you about your viewing habits, and then gives you a plan for cutting the cord. Mohu sells over-the-air indoor antennas, so expect the possibility of upsell (its coming-in-April-2017 Airwave antenna, $150, will share broadcast TV to your Apple TV or iOS device), but if you’re looking to reduce your cable bill, Untangle.tv might be a good site to check out.

Giroptic iO — If you find front and back cameras too limiting, Giroptic can help you out with its 360-degree iO camera, which snaps into a Lightning port and works with most recent iOS devices. Take photos, record movies, or broadcast live Facebook 360 movies with the included app. $249 on Giroptic’s Web site, where it appears to be currently shipping. 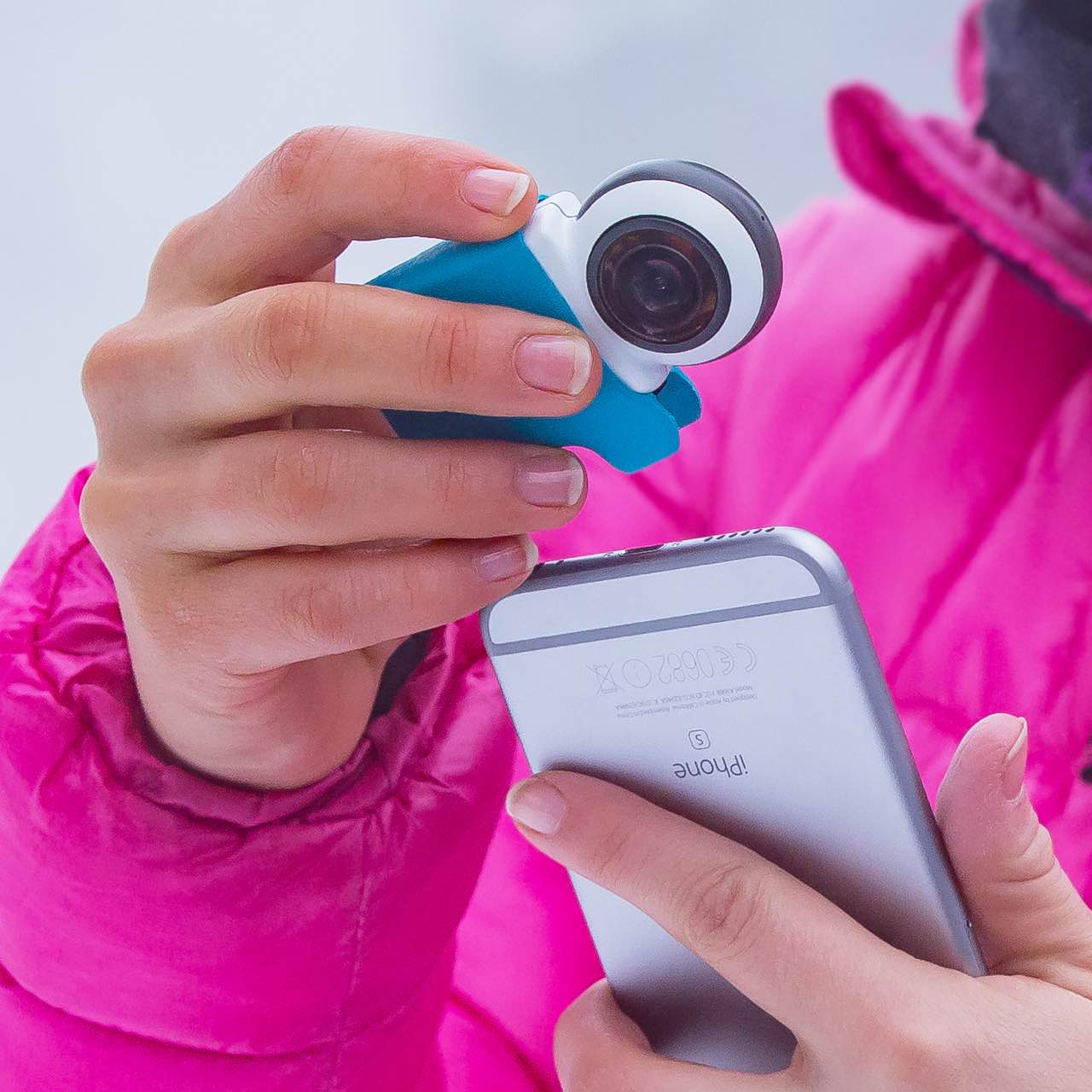 TrackR pixel, wallet, and atlas — I believe Bluetooth tracking devices will be a big deal when the price goes low enough to make them ubiquitous. In the meantime, the currently available TrackR bravo isn’t super cheap at $30, but it’s the size of a quarter and will locate itself (and whatever you attach it to) on an iPhone app. The TrackR family will grow in 2017 with the addition of the smaller TrackR pixel ($25, spring), the credit-card sized TrackR wallet ($30, summer), and TrackR atlas (spring, $40 and up), an app and wall plug that lets you map your house so the TrackR
locations show up in relation to everything else. If only the company would make a tracker small and cheap enough to attach to reading glasses! All TrackR devices share their locations with each other, so if you’ve lost something that’s out of your Bluetooth range in an urban area, you’ll be able to find it if other TrackR devices are nearby.

FinSIX DART — If you have a MacBook or MacBook Pro with USB-C or Thunderbolt 3 ports, and you’re looking to cut down on your carry weight, check out the DART, a 65-watt laptop charger that’s closer in size to a cell phone charger than an Apple adapter and will be adding USB-C this month. It costs $99. 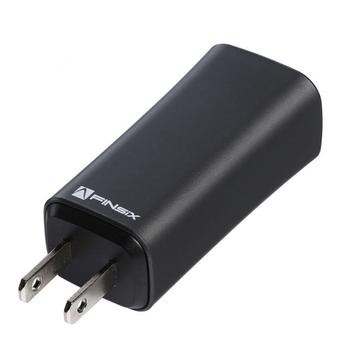 Cosmo Connected — Are you a motorcyclist? Cosmo Connected is a brake light that attaches magnetically to the back of your helmet, putting a brake light at eye level for other drivers. And if you’re in a crash, it notifies authorities of your GPS coordinates within 3 minutes. The press release also mentions using it on regular bikes, but it’s unclear whether that involves a different device or a software upgrade to the current one. Available in May 2017 for $99. 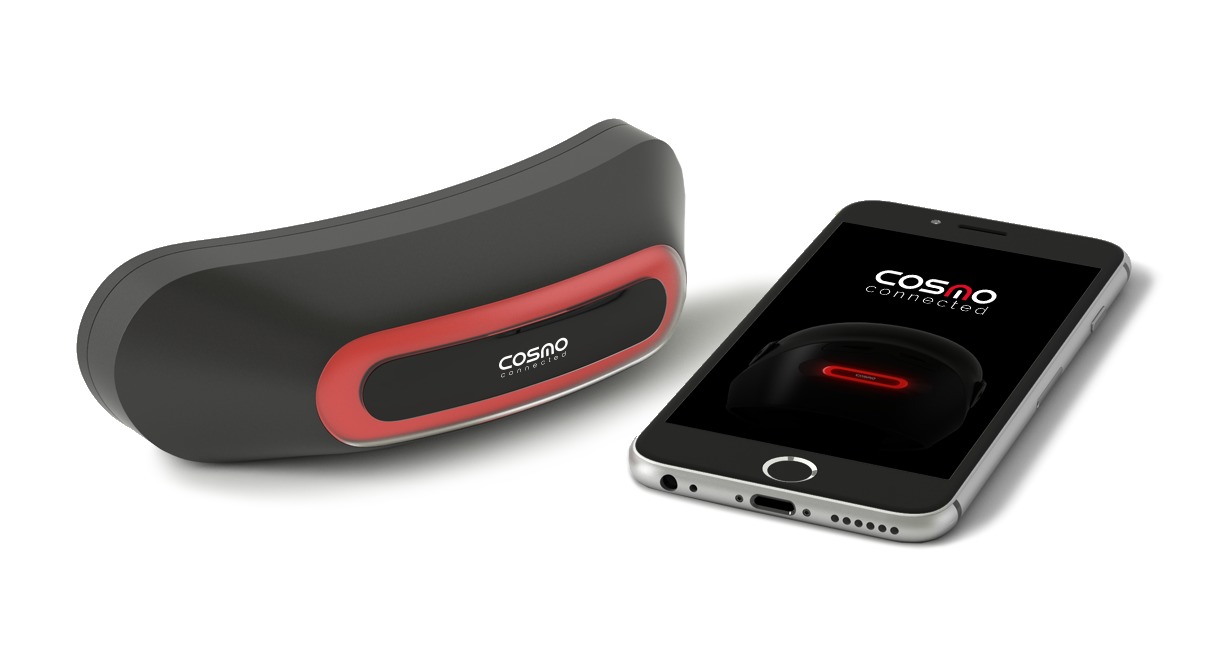 Pico PicoBrew — I know little about beer and rarely drink, but even I’m impressed by this gadget, which I’m sure was elevator-pitched as “Keurig for beer.” $799 gets you a PicoBrew, a five-liter brewing keg, and a five-liter dispensing keg. Add in a brew pack (sold in hundreds of varieties, which you can customize), brew the beer, wait a week or so for fermentation, then transfer to the second keg and drink. I have no idea how economical this works out to be versus your local microbrew, but it sounds a heck of a lot easier than any other homebrewing I’ve heard about.

Immotor Go — The original Segway didn’t set the world on fire, but I’m impressed by the finer touches of the much smaller and less obtrusive Immotor Go. In one mode, it’s a scooter with a maximum range of 20 miles at a top speed of 20 miles per hour, but it can also automatically match the pace of other pedestrian traffic around you. In another mode, it can follow you on autopilot carrying your bags, or you can steer it with your phone. It folds up to something that’s small enough to carry and about the weight of a Kaypro II laptop (27
pounds, in other words). And it has hot-swappable batteries, so you can purchase additional batteries and chargers and keep a set at both ends of a commute. I’m unexcited about the possibilities for the executives and hipsters they show in their marketing materials, but for someone with limited mobility, it could be a game changer. Look for it in March 2017 for $1500. 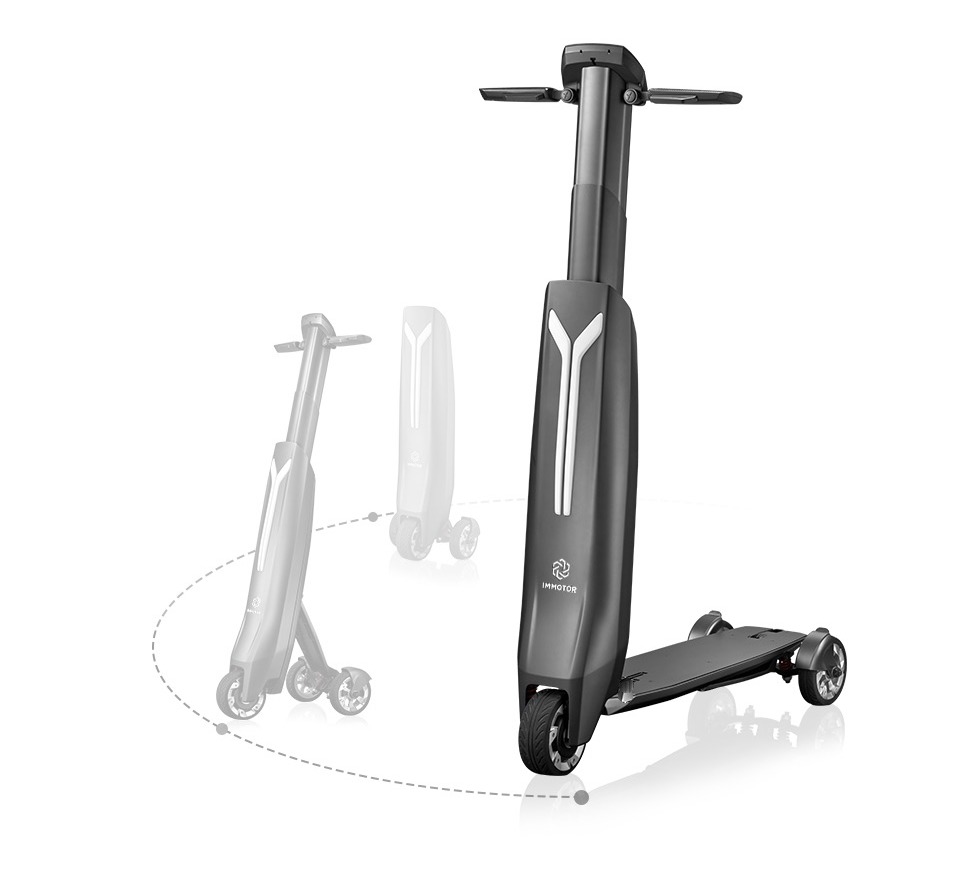 Stringify — Finally, although I haven’t had a chance to check it out yet, Stringify sounds to me like the Internet automation service IFTTT on steroids (and if you’re not sure what IFTTT does, see “IFTTT Automates the Internet Now, but What Comes Next?,” 20 December 2013). IFTTT allows for one condition and one event; Stringify has multiple conditions and creates “macros” for the real world, like “if it’s after 7 PM, my motion sensor outside is tripped, and I’m not home, turn on my lights and send me a text.” Better yet, Stringify integrates with IFTTT so one can
trigger the other and vice versa. Just as with IFTTT, I’m unclear on how Stringify plans to make money.