My final media-only stop at CES 2017 is Showstoppers, the last of the exhibition halls where exhibitors have anted up more cash and we members of the press are fed and watered. But for you, dear readers, it’s all for a good cause, since Showstoppers featured some fascinating products. From here on in, I’ll be slogging through miles of corridors with 100,000 others, stopping frequently when the crowds need to gawk at something shiny. We’ll see if those stops will bear fruit or merely slow me down in my quest to find more neat gadgets for you; most of the time, crowds gather for innovations in exhibitor booth technology rather than what’s actually being demoed.

Foldimate — CES is famous for bizarre Jetsons technology. This year we have a laundry-folding robot: the Foldimate. Like the best Jetsons technology, it isn’t slated to ship for over a year (late 2018), it’s the size of the dryer, and it will cost between $700 and $850. And you can’t just dump a load of laundry on top and have it come out folded; instead, you put each item into a rack, and then the Foldimate can handle it. You have to really hate folding laundry to buy one of these. For the rest of us, just check out this guy’s video. 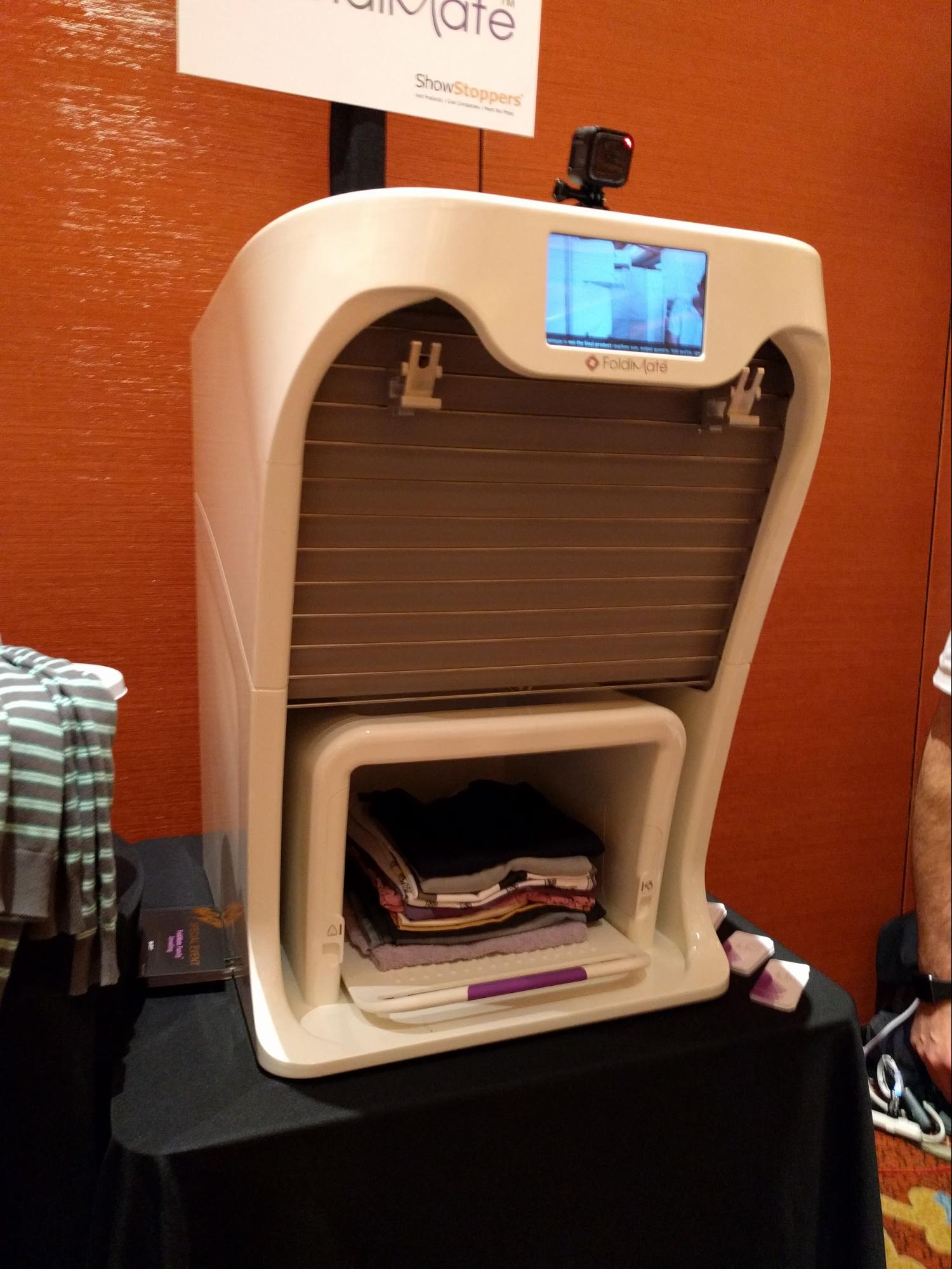 eBlocker — If you’ve gotten your head around the idea of blocking Web ads in your Mac or iPhone browser, how about doing it automatically for your entire home network? That’s the premise behind eBlocker, a Wi-Fi device that, when deployed on your network, employs deep voodoo to block ads and trackers for every other device there, without reconfiguring your base router. I know something about networking, and I have no idea how it accomplishes this feat. It’s priced at $219 for the currently available eBlocker Pro version, with a $59-per-year subscription after the first year to keep its database of sites to filter
up-to-date. If you want more control, eBlocker Family will let you create 10 different profiles of sites to allow and block for the various individuals on your network — due in February 2017, it will retail for $249 and cost $99 per year for the subscription. 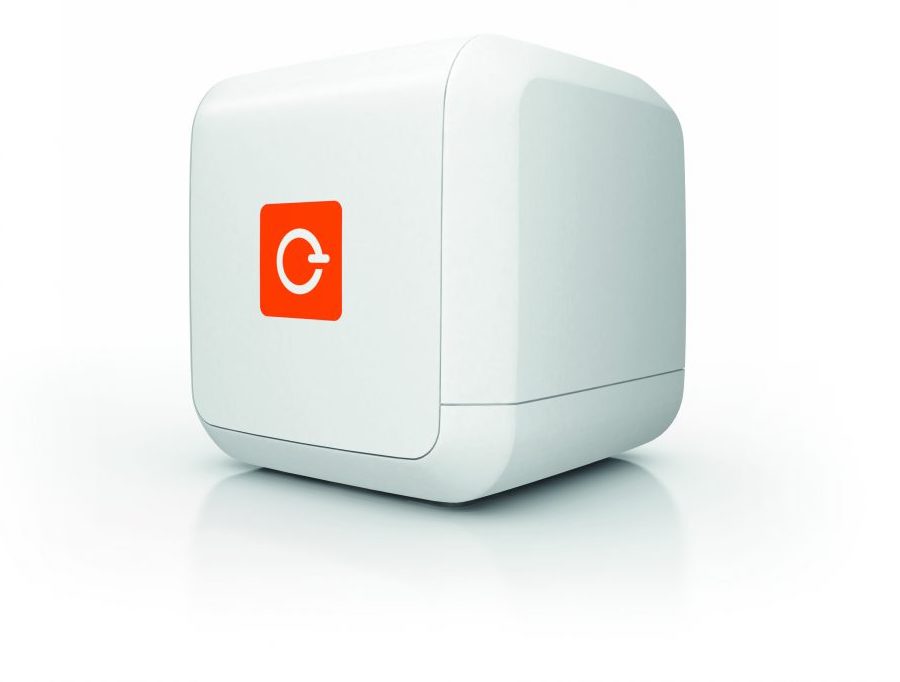 Coros Linx Bone Conduction Bike Helmet — Riding a bike with your earbuds in so you can’t hear overtaking vehicles qualifies as one of the stupider things you can do. Coros has a solution with the Bluetooth-enabled Linx helmet that leaves your ears clear and communicates sound to you through your jawbone. A microphone allows for a phone conversation and is shielded from the wind by being placed near your forehead. Finally, you can control your phone with a remote you can mount on your handlebars. It’s available now for $200, and my editors tell me that the fact that it got a positive review from DC Rainmaker means that it’s pretty good.

Cherry MX Board Silent — There’s a type of keyboard connoisseur who despises the keys in the new MacBooks and misses the touch feel of the Apple Extended Keyboard. Cherry has been making keyboards for these people for a while, but those clacky keys make a lot of noise. For folks who don’t want to become the pariah of their offices, Cherry has introduced the MX Board Silent, which takes away the noise. It will be available later this month for $149. Cherry’s Web site says it’s available only in an “international EU configuration,”
but aside from the € symbol added to the 5 key (in addition to the %), I can’t tell the difference from a U.S. layout.

Glide CMRA Band for the Apple Watch — The Apple Watch may have finally brought us Dick Tracy’s two-way wrist radio, but this is the 21st century… what about video calls? That’s one of the features of Glide’s CMRA, which replaces an Apple Watch band with one that has both a front-facing and forward-facing camera. Glide has released a software development kit for these cameras, so additional functionality can be built into other video apps, alongside what the CMRA’s own software can do. The charging stand does double duty, charging both the CMRA band and the Apple Watch. It’s due in “Spring” for $249, but you can pre-order
for $169 until 9 January 2017. 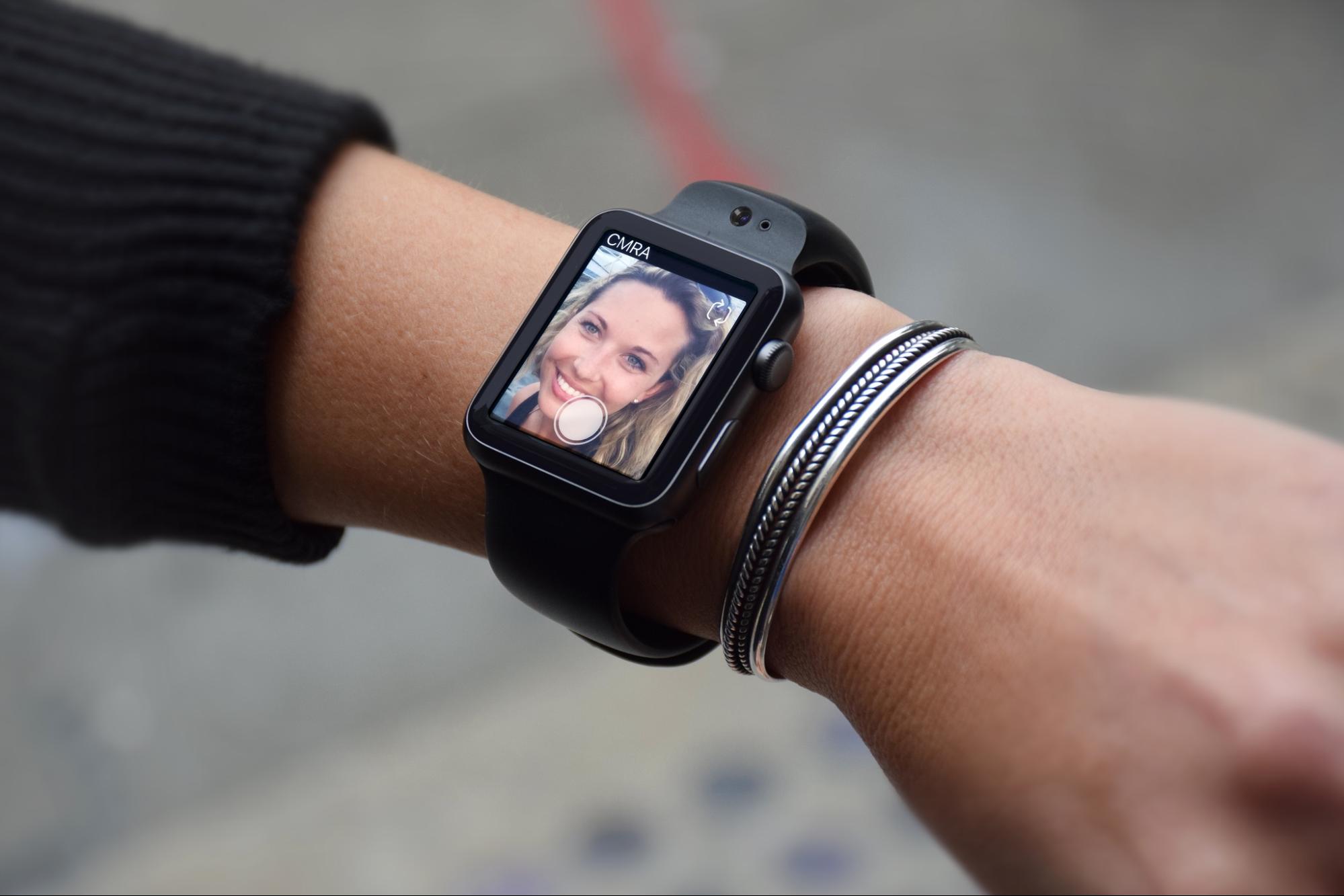 Cameras on Your Glasses: PogoCam and SunnyCam — If lifting your wrist seems like too much effort, how about a camera that attaches to your eyeglasses? PogoTec’s PogoCam connects magnetically to the earpiece of special prescription glasses or sunglasses; PogoTec is working with several manufacturers to make lines of eyewear that can hold the PogoCam but look stylish regardless. Don’t expect to film all day; PogoCam’s capacity is 100 photos or 2 minutes of 720p video. It’s due in Spring 2017 for $149. For athletes, 2 minutes of video is nothing, so check out SunnyCam’s Activ, Sport,
and Xtreme sunglasses, which embed a video camera in the nosepiece of well-designed sunglasses. They can record over 11 hours of video, albeit with recharging, since they can only record for 1 hour at a time. SunnyCam’s glasses range from £120 to £150 and are available now, at least in the UK. 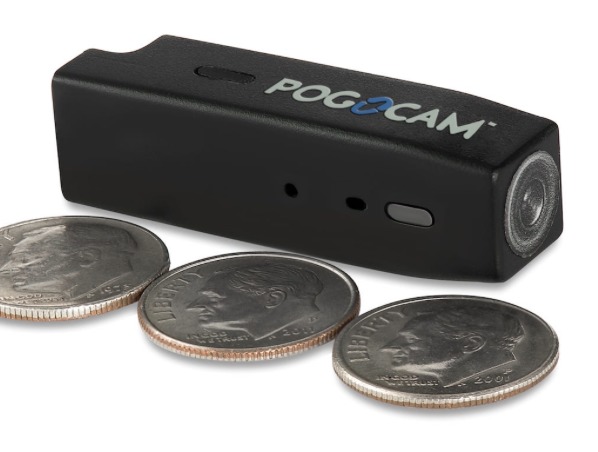 ZVOX Accuvoice — I often watch TV with closed captions turned on because a fair amount of the time I can’t make out what’s being said well enough. If you’re in the same boat, you might want to try a ZVOX AccuVoice, a speaker bar for your TV that uses hearing aid technology to enhance the frequencies of dialog, so they can be heard clearly even when the overall volume is set low. It’s available now for $250.

Yubico YubiKey 4, 4 Nano, and 4C — Two-factor authentication is becoming an increasingly necessary method of ensuring your accounts can’t be compromised with a cracked or guessed password. (If you’re unclear on what two-factor authentication is, Joe Kissell explains it well in “Take Control of Your Passwords.”) Yubico’s ? various YubiKey USB products store cryptographic keys that can be used as one of your two factors, after some setup with the various services you use. In general, use of a YubiKey changes an account from “anyone with a
password can use it” to “only people who have approved keys can log in.”

YubiKey seems to have done everything it could to make two-factor authentication as easy as possible, but that’s still nowhere near simple. I’ve spent twenty minutes reading the YubiKey documentation trying to summarize the service, and even though I understand the concepts, I don’t feel like I grasp the company’s implementation, and I wouldn’t recommend its products to someone who didn’t have some technical knowledge. Beyond that, there’s avoiding the “losing your factor” problem (see Glenn Fleishman’s “Dancing the Two-Step: Coping with the Loss of a Second Factor,” 28 August 2013), and the short answer appears to be this: You don’t buy one YubiKey, you buy two
or three and hide the extras safely. YubiKey’s USB options are the stick-like 4 ($40), the tiny 4 Nano ($50) which seats nearly flush and is designed to be left in the port, and the upcoming 4C ($50) for USB-C ports (due in February 2017). One important limitation to keep in mind is that for Web logins, YubiKey doesn’t support Safari.

Stern Pinball — When I was a kid, I knew that when I grew up, I’d have a basement filled with classic pinball machines (and not knowing that owners had free-play buttons, I also envisioned a large bucket of quarters). Now it’s 2017, and I’m just glad that Stern is still making the darn things after the rest of the industry collapsed. If you want to live up to my childhood dreams, there’s the new Batman ’66 game available starting at $8599, but for less expensive and more mobile pinball play, try the free Stern Pinball
Arcade for iOS (it’s also available for other platforms, like PlayStation 4), which features two free playtables a month, and lets you get about a dozen others as in-app purchases. 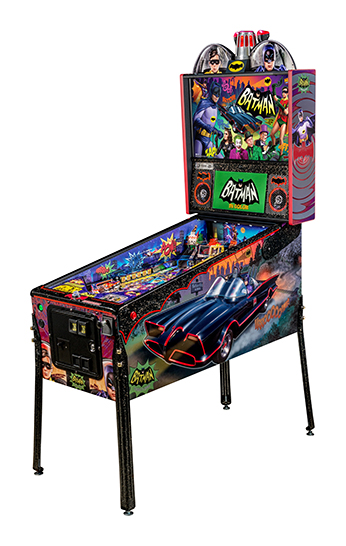 Seed-Up Moore “Infinite” USB Stick — Seed-Up pitches an impossibility: a USB flash drive with an “infinite” amount of storage, even when it’s offline. In fact, the Moore stick is a 64 GB USB flash drive with onboard AI tasked with figuring out what you’re going to need and when. In theory, it uploads anything you’re not using to Backblaze storage and downloads anything you’re going to need. It currently works with Macs, and Seed-Up plans to release an iOS app as well because the hardware already works with the USB-to-Lightning adapters the company has tested. It’s due in July 2017 for between $40 and $70,
which includes a six-month subscription to unlimited Backblaze storage, with pricing of “less than $9” per month after that. Obviously, how well it works will depend on the quality of that AI. I’m curious to know if I’ll see “∞ GB available” in the Finder.

GeniCan — I would have thought that a smart trashcan that helps you buy more of things you’ve used up would be as silly as a laundry-folding robot, but GeniCan’s demo (watch it on their site) impressed me out of my jaded predispositions. GeniCan is a barcode scanner that clamps to the side of a standard trash can, and you use it to scan packages as you’re tossing them in the garbage or recycling — it automatically adds the scanned product to your shopping list. If there’s no barcode to scan, GeniCan asks you what you’re throwing out and uses voice recognition to add it to your list. So, if you’ve just finished a roll of
paper towels, just hold the cardboard tube in front of the scanner and say “paper towels.” Items you scan get added to a shopping list app that runs on iOS or Android devices, and you can optionally set them for automatic ordering from Amazon. It will ship in March 2017 for $149; you can save $25 by pre-ordering.

Play-Doh Touch Shape to Life Studio — This product is not new, having been in some Apple Stores for two months already, but I was astounded by Play-Doh’s Touch Shape to Life Studio, which is functionally a 3D scanner designed for a 5-year-old. Mold a Play-Doh creature and put it on the studio pad, take a picture of it with an iPad, and the thing comes to life in a 3D environment on the iPad, where it cavorts with the other creatures you’ve already scanned. Considering the dozens of 3D scanners I’ve seen that require an engineering degree to
comprehend, I was blown away by the ease of use. It’s only $40 at a retail Apple Store or from Apple’s Web site. 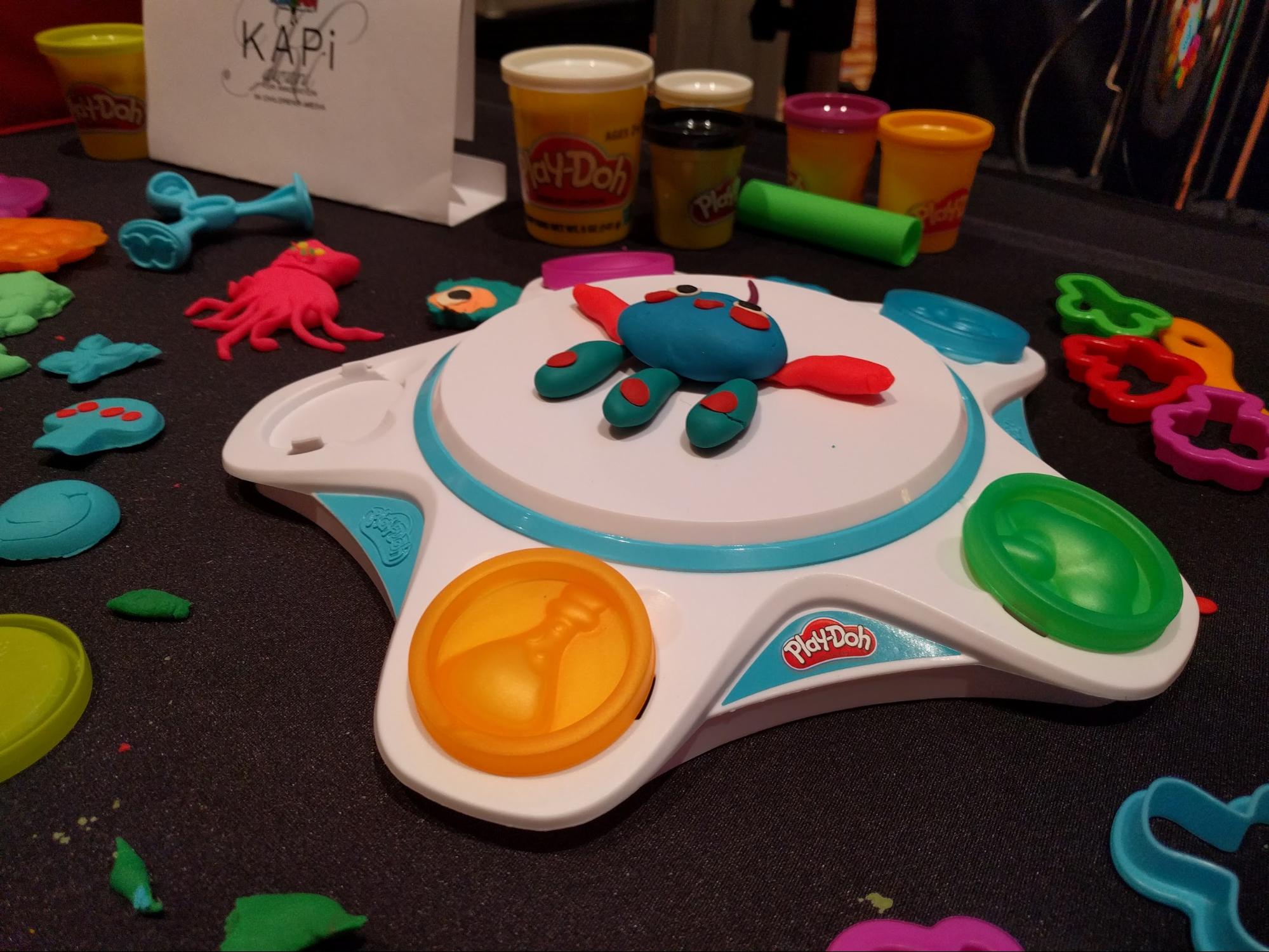 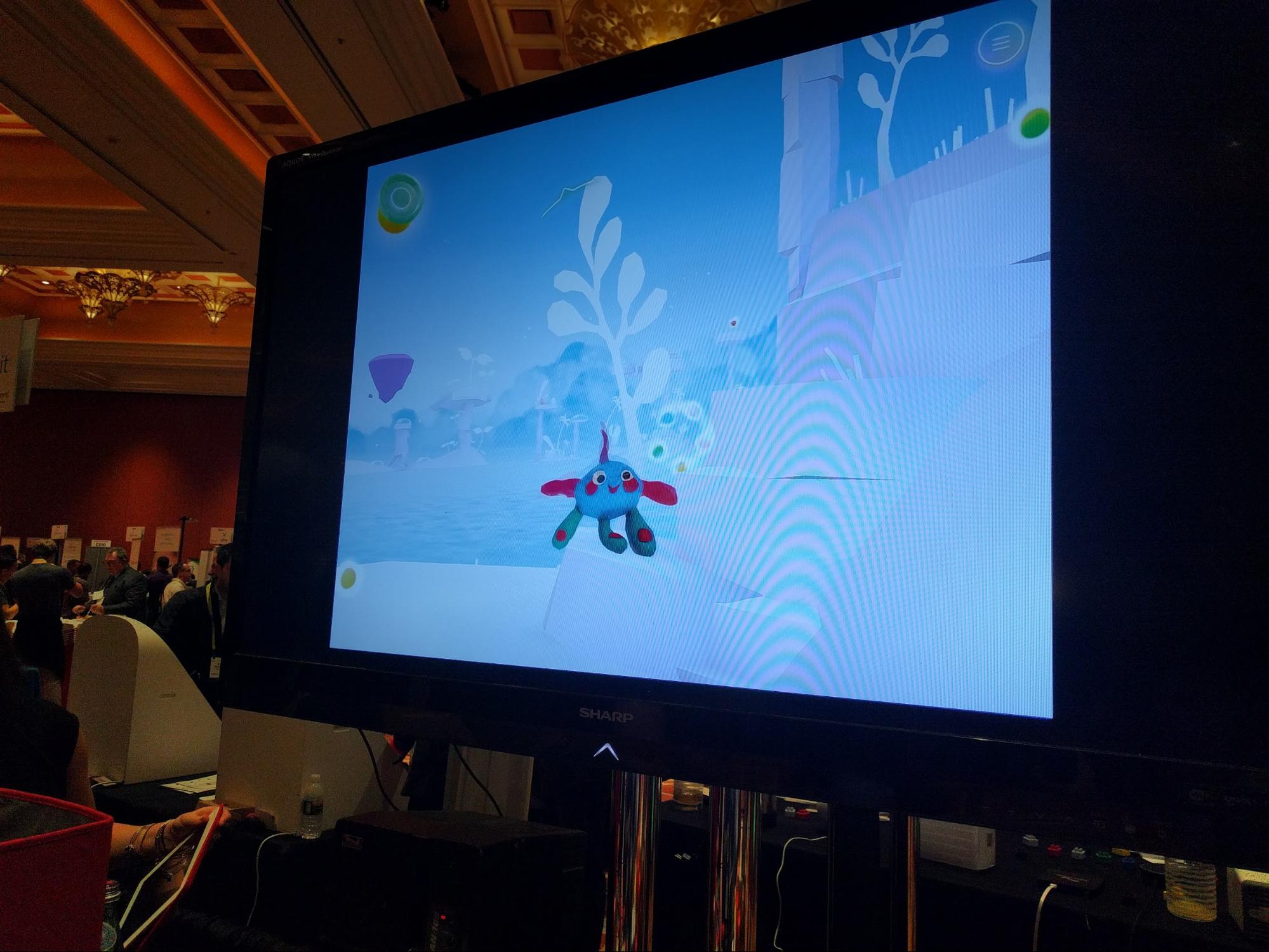 Comments About CES 2017: From Laundry to Play-Doh at Showstoppers