In “A Prairie HomeKit Companion: Setting Up Accessories and Rooms” (16 January 2017), I explained how to set up Accessories and Rooms, which are the fundamental building blocks of HomeKit, Apple’s system for home automation. But that article was a bit of a tease, since it left you hanging with a set-up system that you hadn’t used. In this installment, I’ll explain how you control your Accessories with Apple’s Home app, as well as Control Center, Siri, and even your Apple Watch.

Controlling Accessories in the Home App — To access an Accessory (which, you’ll remember, generally maps to a particular device), go to the Rooms screen, tap the hamburger button, and choose the Room that contains the Accessory. 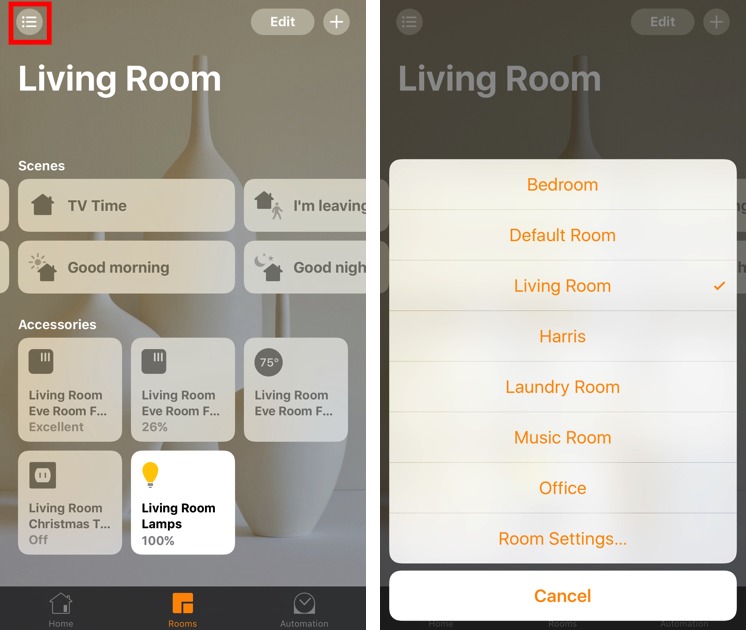 In the Room’s listing, you’ll see all the Accessories associated with that Room. For things like smart bulbs and smart plugs, you can tap the Accessory icon to turn it on or off. That’s simple to say, but it’s actually one of the key uses of the Home app, since it gives you remote control over any Accessory that turns on and off. (For some other devices, like room sensors, tapping their icons will have no effect because they’re always on.)

To work with Accessories in additional ways, either press and hold or 3D Touch an Accessory icon. That brings up a screen that shows more details and controls. For example, a room sensor shows its current status, a smart plug has a simple on/off switch, and a smart bulb offers a brightness slider. 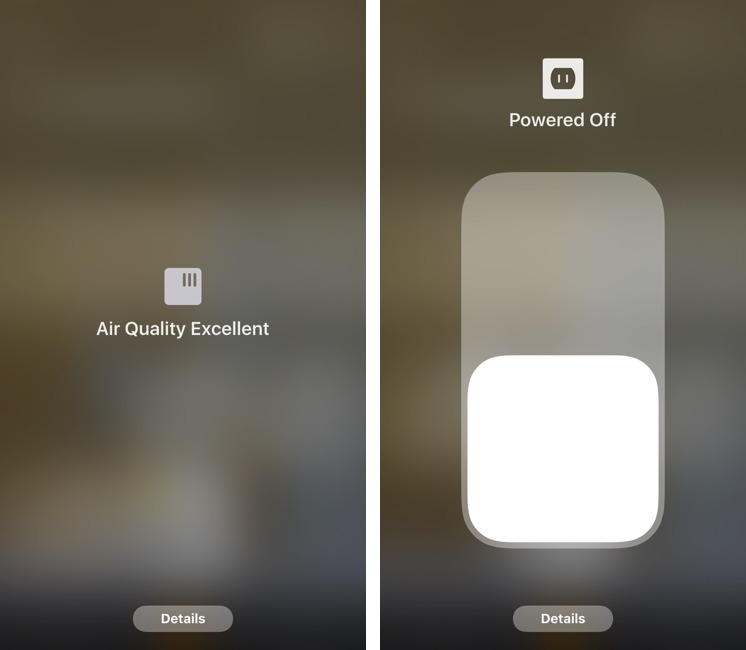 If a smart bulb supports multiple colors, a Color button appears too; tapping it brings up buttons that let you choose a color for the light. Tapping Edit in the center of a button brings up a detailed color wheel. Choosing a color there replaces one of the circles in the main color selector with that color. The Color screen also has a Temperature tab, which is the same thing, but with various degrees of white light. 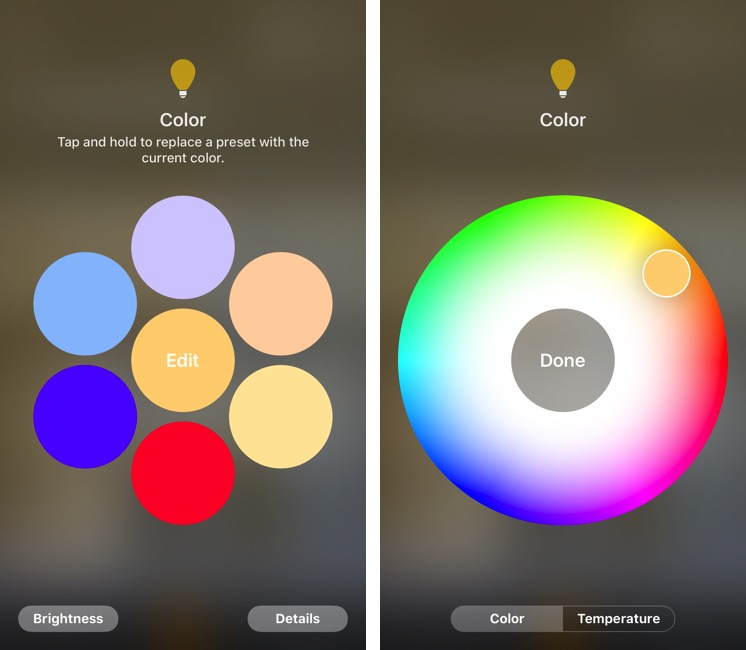 Frustratingly, Apple’s Home app doesn’t let you copy your color selections between devices, so if you want to be sure that all your bulbs have the same color, you’ll need a third-party HomeKit app with finer control, like Matthias Hochgatterer’s Home app. But if you’re dealing with lights that should work together anyway, you can group them, which you do from the Details screen.

It’s All in the Details — When you tap and hold or 3D press a HomeKit Accessory, you can also access its Details screen, which presents a few Accessory options, like name and location. You might remember some of these options from initial Accessory setup, as I detailed in “A Prairie HomeKit Companion: Setting Up Accessories and Rooms.” 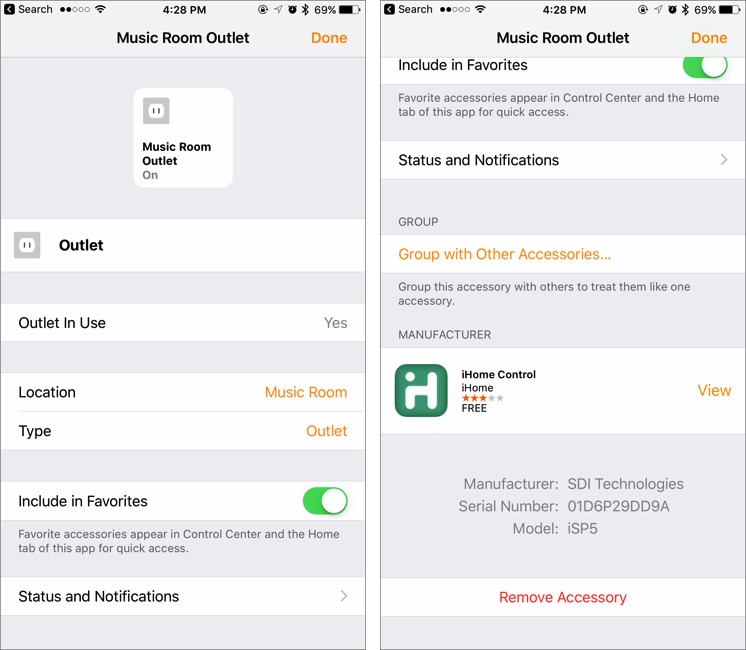 I want to focus on two options in the Details screen. The first is the Include in Favorites switch. You should enable this for any Accessory you plan to use with any regularity because it adds a shortcut for that Accessory to the Home screen of the Home app, to Control Center, and to the Home app on the Apple Watch. Note that Control Center won’t display more than nine Accessories at a time, so it pays to be picky.

The second is the Group with Other Accessories option, which combines your Accessories so that they act as one — their individual Accessory icons will be replaced by a single new icon. This is useful if you have multiple smart bulbs in a single light fixture or multiple lights in the same room that you want to be in sync. I use it to group our living room floor lamps to keep their brightness and color settings the same.

To group Accessories, tap Group with Other Accessories. On the next screen, give your group a name and select the other Accessories to add to the group. Tap Done when you’re finished. 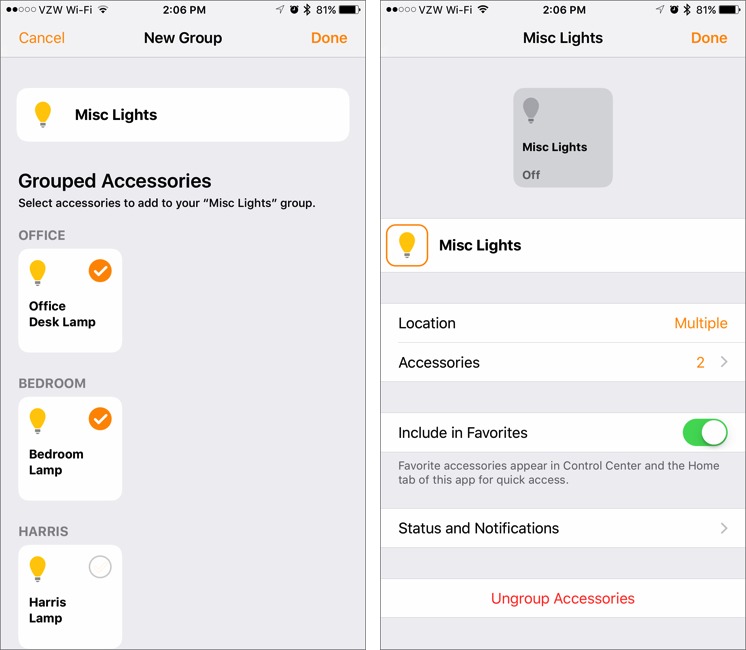 If you want to adjust one Accessory in a group independently, go to the Details screen for the group and tap Accessories to reveal individual icons for the Accessories. From that screen, you can adjust each Accessory on its own.

To create a Scene, tap the plus icon in the upper-right of the Home or Rooms screens and choose Add Scene. Home will suggest some Scene names, or you can create your own name by tapping Custom. 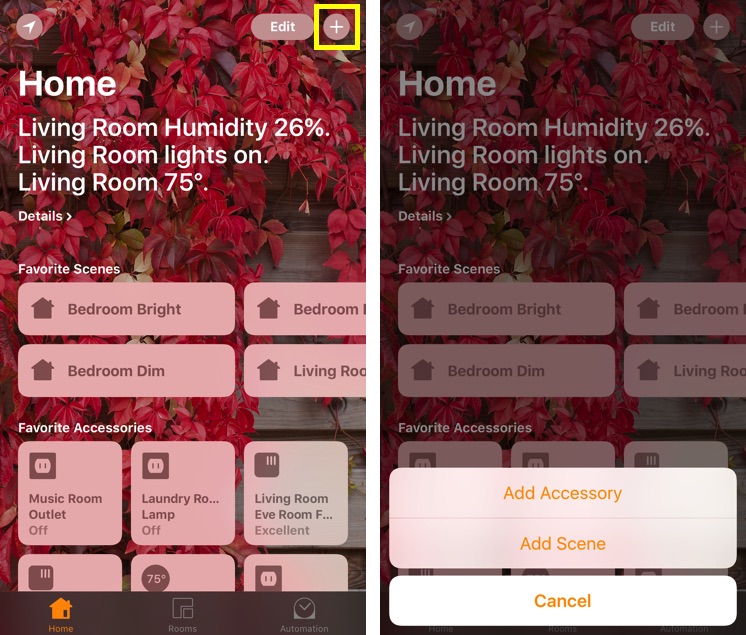 Once your Scene is named, tap Add Accessories, and then tap individual Accessories to add them to the Scene. Tap Done to move on.

Next, you’ll be taken to a screen with the Scene name, and the Accessories included in the Scene. Adjust the Accessories as you normally would. For instance, tap a smart bulb icon to turn it on in the Scene, or press and hold to adjust its brightness and color. 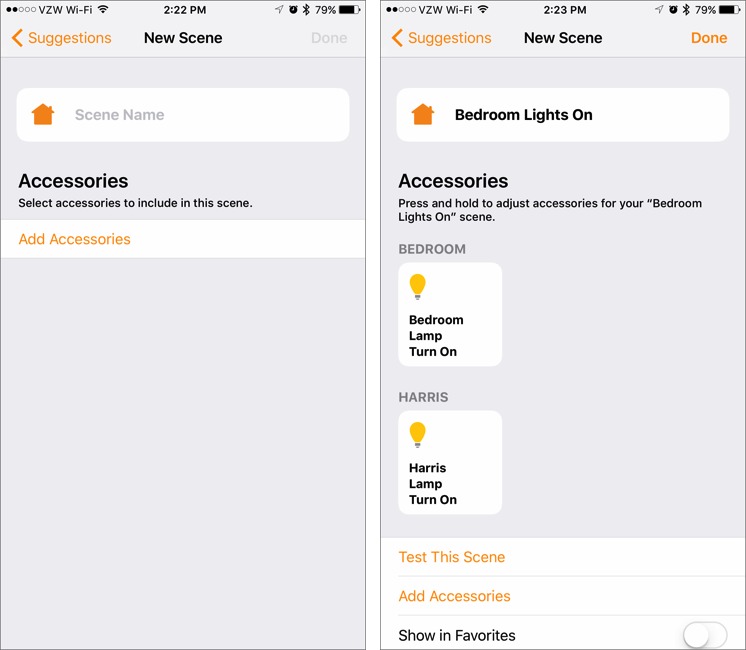 Finally, at the bottom are options to Test This Scene, which activates it temporarily; Add Accessories, where you can modify the Accessories included in the Scene; and Show in Favorites, which I recommend enabling for essential Scenes.

Suggested Scenes — I recommend three Scenes to everyone: Good Morning, Good Night, and Scenes to quickly adjust the brightness in your primary living areas.

For instance, I have three favorited living room Scenes for adjusting brightness: Living Room Bright, Living Room Dim, and Living Room Night, which set my living room Hue lights to 100 percent, 40 percent, and 0 percent (very dim, but not off), respectively. With these Scenes, I can easily dim the living room to watch a movie, but also quickly brighten it up if I need to find the remote or change my son’s diaper.

Adjust these scenes as you see fit, but I recommend using my names, as they’re easy to identify and Siri has no trouble understanding them.

When configuring the Good Morning and Good Night Scenes, the settings will depend on your Accessories and living situation. Think carefully about what to activate and why.

My Good Morning Scene does three things. It turns on the smart plug that controls the lamp in the laundry and music rooms and sets the living room lamps to 40 percent brightness. During the Christmas season, it also turned on the plug that controlled the Christmas tree lights. My Good Night Scene does the opposite, though it dims the living room lamps to 0 percent instead of turning them completely off.

These Scenes are set up in such a way to light up the house sufficiently to navigate in the morning, without being painfully bright. Even though we have Hue bulbs in our bedrooms, these Scenes don’t touch them at all. Why not?

All that said, I don’t recommend that you create Scenes right away. Instead, experiment with your Accessories and figure out which settings you like and which devices you use most. Setting up Scenes will be easier once you have a sense of what you’re doing regularly.

But if you just want to create some goofy Scenes to turn your living room blue or whatever, go for it! That’s part of the fun of home automation. (If I ever install a HomeKit-equipped thermostat, I’ll probably create a Game of Thrones-inspired scene that turns my lights blue and drastically lowers the temperature. Because I’m a huge dork.)

Control with Control Center, the Apple Watch, and Siri — Jumping in and out of the Home app every time you want to turn on a light is more work than flicking a switch on the wall. Thankfully, Apple offers some quicker ways to activate your Accessories.

In the Home page of Control Center, a button in the upper right lets you switch between controlling favorite Accessories and Scenes. Tapping an Accessory or Scene turns it on or off. As with the Home app, you can press and hold or 3D Touch Accessories in Control Center to see more advanced settings like brightness and color. 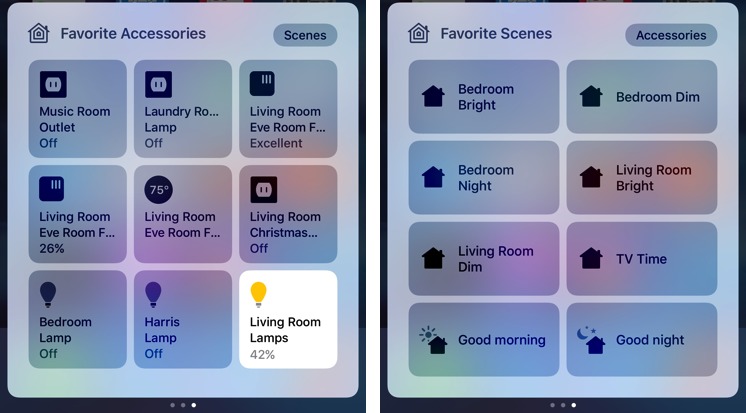 Control Center can display only nine Scenes and nine Accessories, so while you should favorite the items you use the most, you also want to be selective.

If you own an Apple Watch, the Home app built into watchOS 3 also lets you control favorite Accessories and Scenes. I recommend adding it to your Dock for quick access. Tapping an Accessory or Scene activates it, while the … button lets you adjust things like brightness — which you do with the digital crown. That said, I don’t use the Apple Watch Home app often, as I find it unreliable. It frequently throws No Response error messages for all of my Accessories. Like many Apple Watch activities, I can perform the same task on my iPhone more quickly.

Of course, you can also control HomeKit with Siri, which is a big win when it works. If everything is set up correctly, you can use a number of commands, such as:

For the most part, Siri controls work well, even with Hey Siri on the Apple Watch (though my watch usually takes longer to recognize the command). You can even use these same Siri commands with the fourth-generation Apple TV, assuming it’s running tvOS 10 or higher and it’s signed into the same iCloud account as your other HomeKit devices.