Just under a year ago, Apple released new Mac and iOS versions of iBooks that could store your iBooks library on iCloud Drive. At the time, I noticed numerous and distressing problems with the new iCloud-enabled iBooks apps (see “iBooks with iCloud Drive Is Unreliable and Confusing,” 30 March 2016). Now, after more than ten months and with several intervening updates to iOS (from 9.3.1 to 10.2.1), macOS (from 10.11.4 to 10.12.3), and the iBooks apps (from 1.5 to 1.8 on the Mac and from 4.7 to 4.10 in iOS), the time has come to take a look at the problems I reported to see which ones Apple has resolved and which remain.

Keep in mind that my observations, as in the original article, describe my experiences with my own devices and do not attempt to describe setups other than my own. These days, I use a mid-2015 27-inch iMac with 5K Retina display, an iPhone 6 Plus, an iPad Air, and a 9.7-inch iPad Pro, all running the currently released versions of their respective operating systems. All of these devices are accessing my personal iCloud Drive-based iBooks library, which contains more than 700 titles. Nonetheless, although I describe only my own experiences, I’ve received numerous questions and complaints about similar iBooks problems from TidBITS and Take Control readers.

I’ve labeled the topics in this article to match those in my original piece:

Let’s see how far we’ve come… or not.

Enabling iCloud Drive/iBooks Integration — Not much has changed here. You still enable iCloud Drive with iBooks as I described a year ago, and Apple’s support documentation continues to be less than helpful.

In particular, what documentation there is assumes your iBooks library consists almost entirely of books purchased from the iBooks Store and provides little guidance for those users whose libraries, like mine, consist largely of books acquired from other sources. More troubling, as you’ll see below, is that some of the guidance for syncing your non-purchased books is out of date and inaccurate.

Uploading Irritations — My uploading irritations have almost completely vanished, but that may be more a result of how I do things these days. I seldom add a book to my library from any of my iOS devices: I use iBooks on the Mac for that, and when I do, I wait until the “uploading” badge on the newly added book’s thumbnail goes away before I look for it on iOS devices. For most books, that upload takes only a minute or two.

Furthermore, unlike ten months ago, I haven’t recently had to move hundreds of books to the iCloud Drive library all at once, so the problems I encountered when I first migrated my library to iCloud no longer occur. I can’t guarantee, however, that a user who is just now performing such a migration won’t encounter problems similar to those I had last year.

Happily, the order of the books in manually sorted collections on each of my devices now seems stable on a per-device basis. That is, books don’t randomly wander around as they did when I first migrated my library.

Corruption Issues — My library migration last year resulted in a non-trivial number of corrupted and unreadable books in my library. In last year’s article I described the steps I had to take to eliminate corrupted books.

Since then, I’ve encountered cases of corruption only a handful of times. In all such situations, that corruption has happened only with books from sources other than the iBooks Store, and replacing a corrupt book with an uncorrupted backup copy fixes it. (Yes, I back up all my non-iBooks Store ebooks outside of iBooks before I put them in my iBooks library, and I recommend you do the same.)

One particular corruption problem with my iCloud Drive library that I hadn’t experienced when I wrote the previous article, though, has continued to this day. It has to do with replacing books with newer versions. When I’m writing a novel (a mostly harmless pastime I sometimes indulge in), I like to produce an EPUB version of my current draft so I can see how it reads without being tempted to tinker. In the course of a month, I may make half-a-dozen or more such EPUBs.

The problem occurs when I replace an old draft EPUB with a new one: often, although not always, iBooks stumbles over the replacement book’s length. For example, if the old EPUB has 126 pages and its replacement has 143 pages, iBooks won’t let me read past page 126 — pages 127 through 143 exist, but iBooks won’t let me flip past page 126. I can get to pages beyond the older version’s page count only by doing a search. I can sometimes fix this problem if I completely remove the book from my iBooks library and wait a few days. After that, iBooks “forgets” the old page number limit when I upload the replacement. Sometimes.

Insurmountable Obstacles — Last year, I presented a list of obstacles that seemed to be insurmountable. Here’s that list, with my current observations.

Final Words — iBooks is not quite as unreliable and confusing as it was when I wrote about it last year, but neither has it improved nearly as much as loyal iBooks users deserve. Moreover, what little support documentation Apple provides is sketchy and inaccurate, leaving the impression that even the support and documentation departments within Apple are ignoring iBooks. 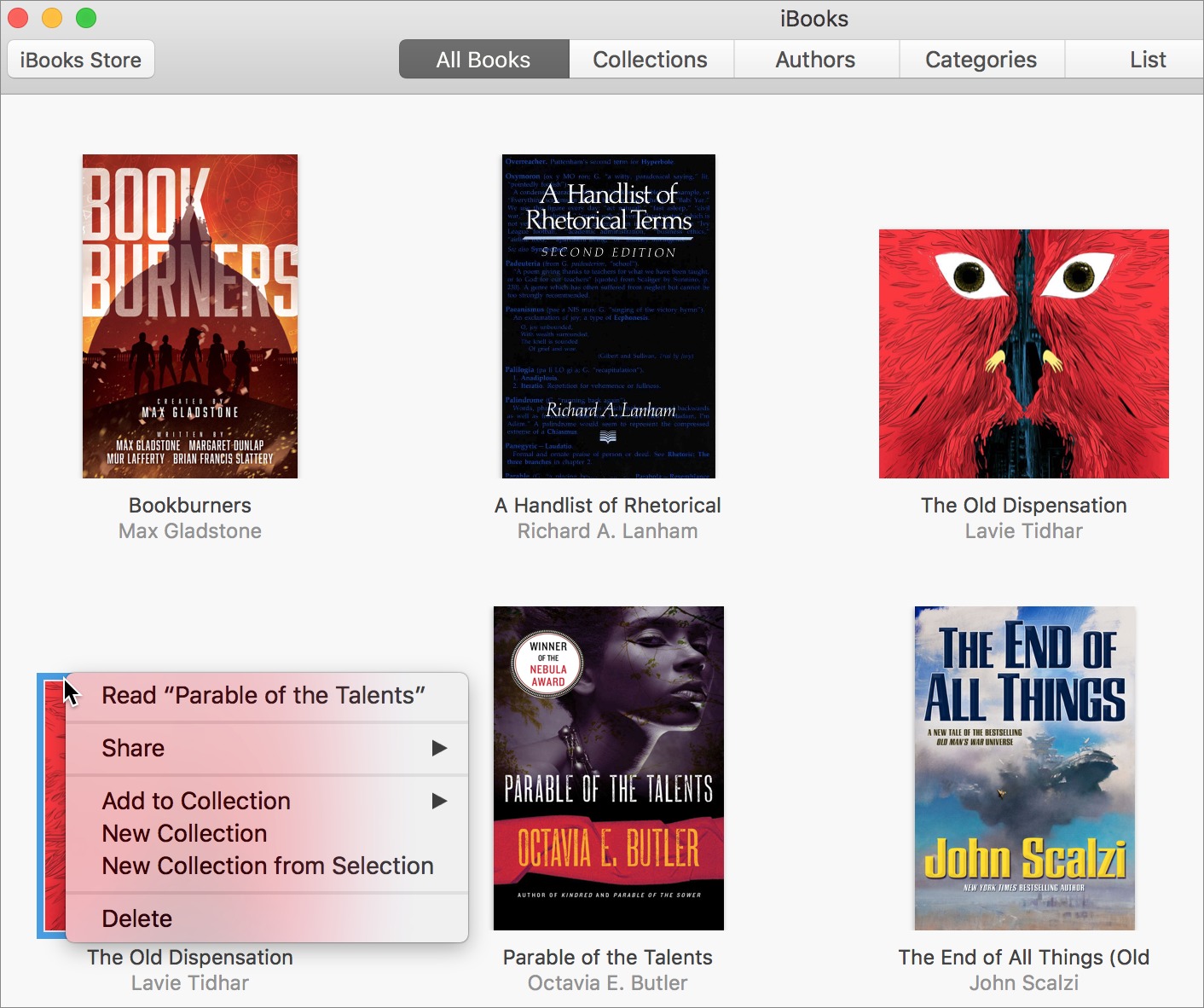 Earlier this month, Daniel Steinberg wrote a blog post titled “I Wish Apple Loved Books.” I completely agree with that sentiment. I cannot see into the heart of Apple to judge the depth of its love for iBooks, but, from external appearances, whatever affection it has seems to become ever more shallow with each passing release. And, for an ebook lover like me, that is heartbreaking.

Comments About The State of iBooks in Early 2017