Not everyone is sold on the iPad for mobile productivity, but I am. The iPad Pro, in particular, has been a revelation for getting a lot done while on the move – especially when paired with a physical keyboard from Apple or a third-party accessory maker.

I made this point when I tried out third-party keyboards for the 12.9-inch iPad Pro (see “Three Alternatives to the iPad Pro’s Smart Keyboard,” 8 February 2016).

The size and bulk of the 12.9-inch iPad Pro present a problem, though. It doesn’t offer significantly more portability than a typical Apple laptop. It comes with a laptop-like price tag, too, so why not just buy a 13-inch MacBook Air?

The smaller and cheaper 9.7-inch iPad Pro makes more sense to me as a laptop alternative. It’s what I grab if I am going to be out and about all day since I can tuck it in my mini-messenger bag with room to spare and no shoulder strain. (If I’m off to the office, I opt for the far more flexible and powerful 2016 MacBook Pro.)

As with the 12.9-inch iPad Pro, though, a physical keyboard is a must. Apple’s own Smart Keyboard is an excellent option, but I’ve discovered tempting alternatives from other companies.

Which keyboard accessory is right for you? If you want the ultimate portability, Apple’s ultra-thin keyboard is hard to beat, given that it folds up against the iPad when not in use. Its rubbery keys can be an acquired taste, though.

That’s why it’s nice to have other options. Features found in alternative keyboard cases for the iPad include full-size keys, adjustable backlighting, multiple-device wireless pairing (for using the same keyboard with an iPhone and a Mac too), ruggedized construction for enhanced tablet protection, and ways to attach an Apple Pencil for an all-in-one solution. Support for Apple’s proprietary Smart Connector, a feature used by the Smart Keyboard but few other products, is another major plus because it eliminates the need for separate accessory charging and bypasses sometimes-flaky wireless connections.

Here then are a few of my favorite keyboards for the 9.7-inch iPad Pro.

Studio Neat’s Canopy — My preferred iPad keyboard of all time until recently wasn’t an iPad accessory at all. It was the Apple Wireless Keyboard for the Mac. I combined it with Incase’s Origami Workstation, a protective case that unfolds to serve as a stand for the iPad.

Studio Neat’s $40 Canopy is functionally near-identical to the Origami Workstation, but with a personality of its own. When wrapped around a Magic Keyboard, it presents an attractive synthetic-canvas exterior that remains securely folded courtesy of a leather strap with a stainless-steel snap. The case’s interior is made of a soft microfiber to protect the keyboard from scratches. 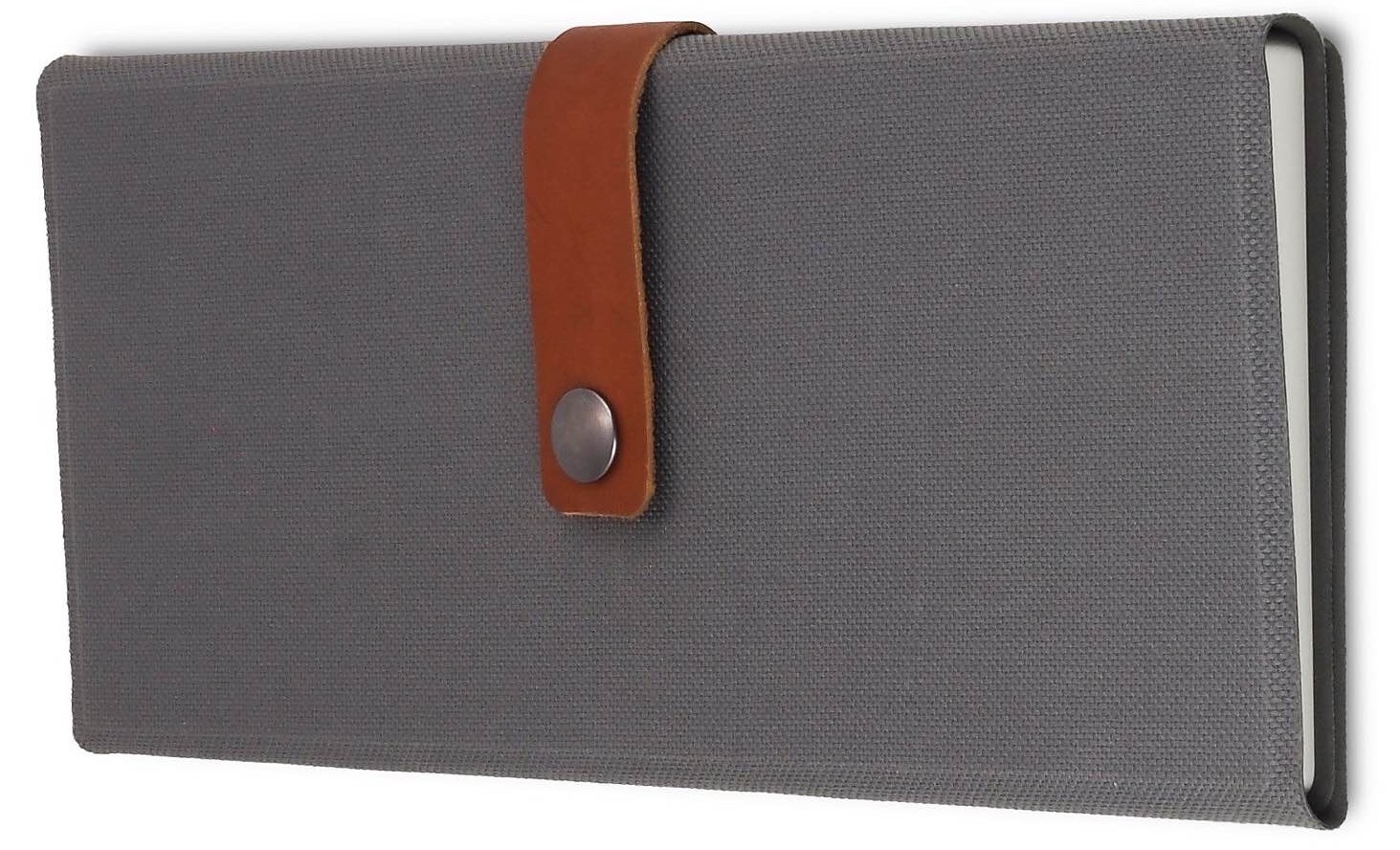 Deploying the Canopy for use with the iPad is a simple matter of unwrapping the cover with the keyboard placed before you, and folding two of the Canopy’s three folding segments backward to create a stand.

Underneath, the Canopy’s leather strap snaps back into place to keep the stand from collapsing. 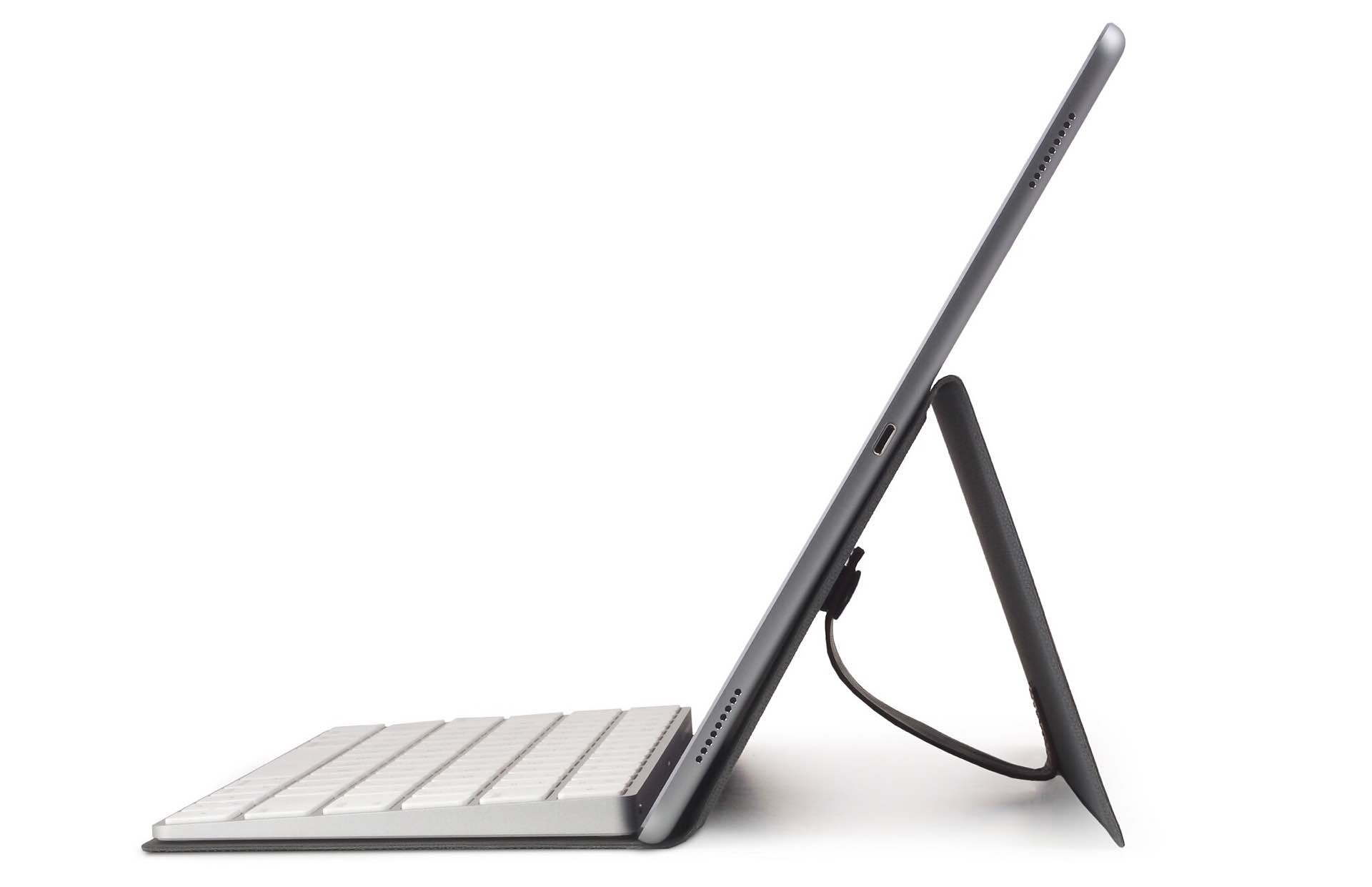 With the Canopy, you are free to position your tablet in landscape or portrait mode. 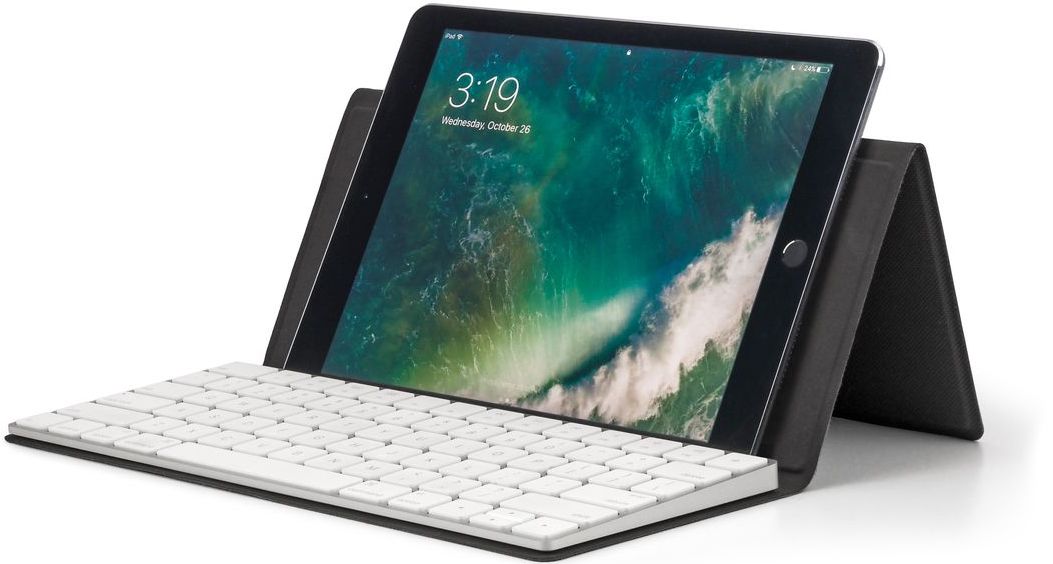 The Canopy accommodates any iPad, from the 12.9-inch iPad Pro to the iPad mini. Heck, it even works with an iPhone. The biggest advantage of this arrangement isn’t the Canopy but the keyboard. Unlike most iPad keyboards that are scrunched to conform with the iPad’s compact dimensions (including the 9.7-inch iPad Pro’s Smart Keyboard), the Magic Keyboard has full-size, traditionally spaced key caps. This alone makes the Canopy combination a winner for me, especially since my liking for the Magic Keyboard has deepened after I reviewed it (see “Apple’s New Magic Peripherals Offer Modest Change,”
25 November 2015).

What’s more, the combination of the Canopy and Magic Keyboard is surprisingly comfortable and stable on my lap as well as on a table, desk, or air-cabin tray table. 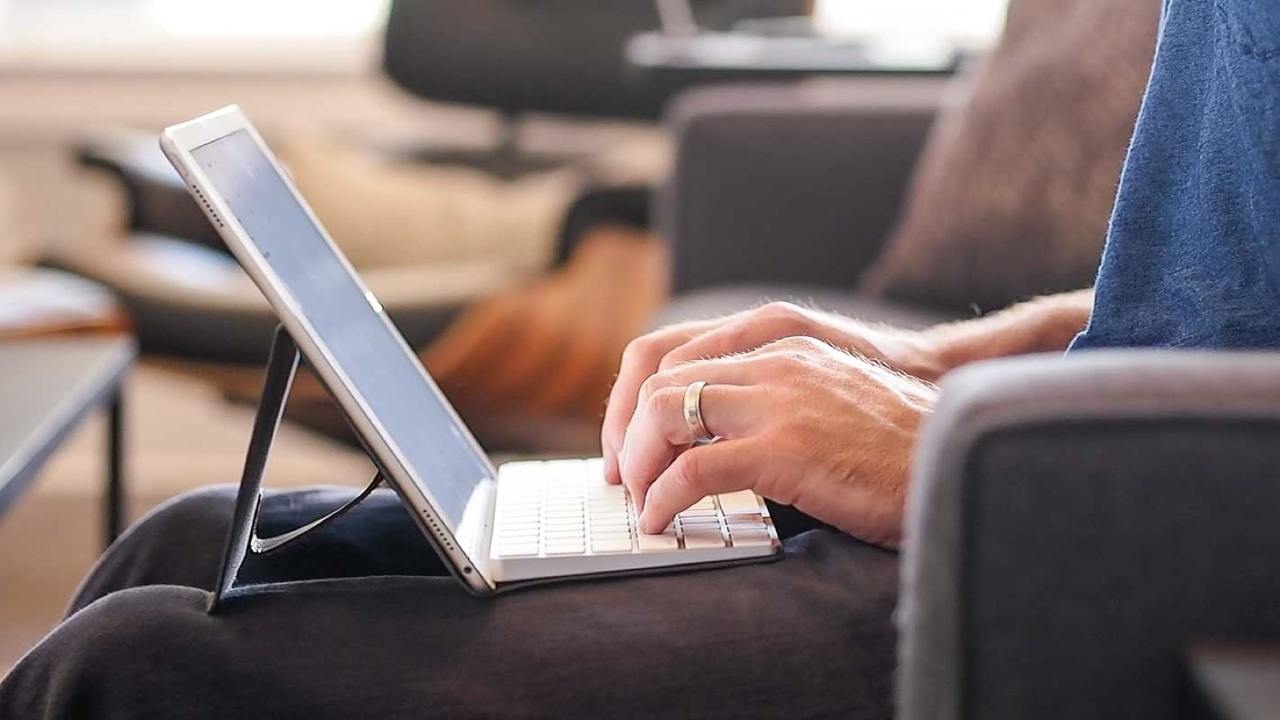 The Canopy’s big disadvantage? It, with its companion keyboard, is one more thing to carry in a bag, along with the iPad. It’s two pieces to tote, instead of one.

I can live with that, though, to get a gloriously un-scrunched typing experience, and the Canopy along with the iPad doesn’t weigh down my bag that much.

Logitech Create — When Apple released the 12.9-inch iPad in September 2015, Logitech was one of the first to market a matching keyboard case.

The Logitech Create has distinct advantages and disadvantages. It hooks to the iPad via Apple’s Smart Connector, which eliminates the need for clunky Bluetooth pairing and separate charging. Its keyboard had a nice MacBook-like feel, too. But the Create was bulky. It made the already outsized iPad Pro impractically and spectacularly gargantuan.

Now Logitech has released a Create case for the 9.7-inch iPad. This $129.99 case is an improvement over its big brother since it doesn’t bulk up the small tablet quite as dramatically. Logitech has added some refinements, too.

When the Create is closed, it encases the tablet in a sturdy and stiff fabric that has a pleasingly rough texture on the outside. 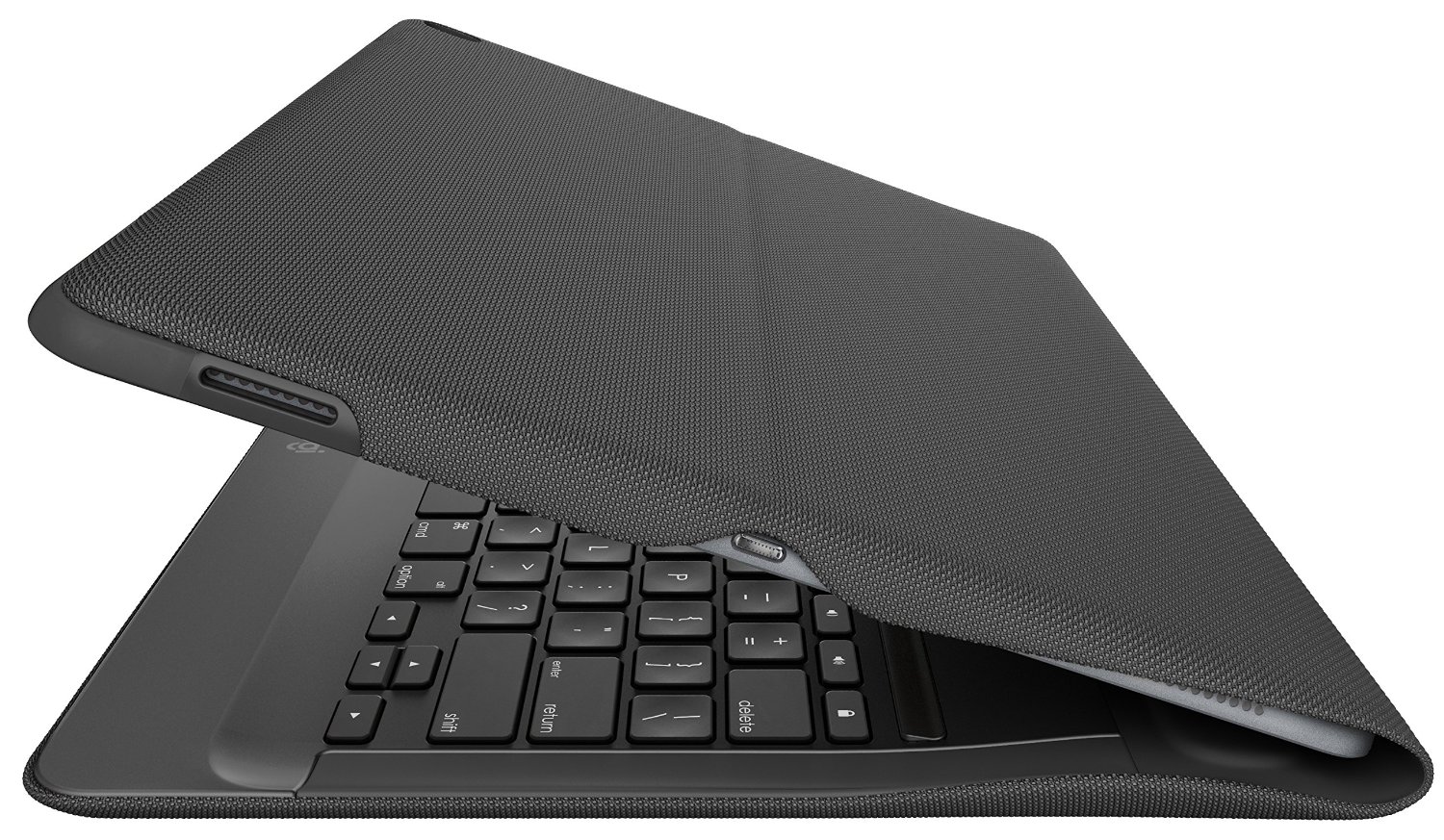 When you open the case, the iPad’s lower edge flips toward the user and magnetically engages with three pins just above the keyboard to initiate a Smart Connector link. That connection automatically activates the keyboard, which is backlit and has a feel that’s pleasantly soft, if perhaps a bit mushy.

The Create offers a spot to stash an Apple Pencil, too. A soft, cylindrical holder is integrated into the inner fold of the case, meaning the stylus is well protected and out of sight when the Create is closed. The Create also has a touchscreen mode of a sort. You can fold the iPad on top of the keyboard with the screen facing upward for touch-only interaction. It’s a somewhat clumsy arrangement, but it works if the iPad sits in your lap or on a desk, and not loose in your hands. 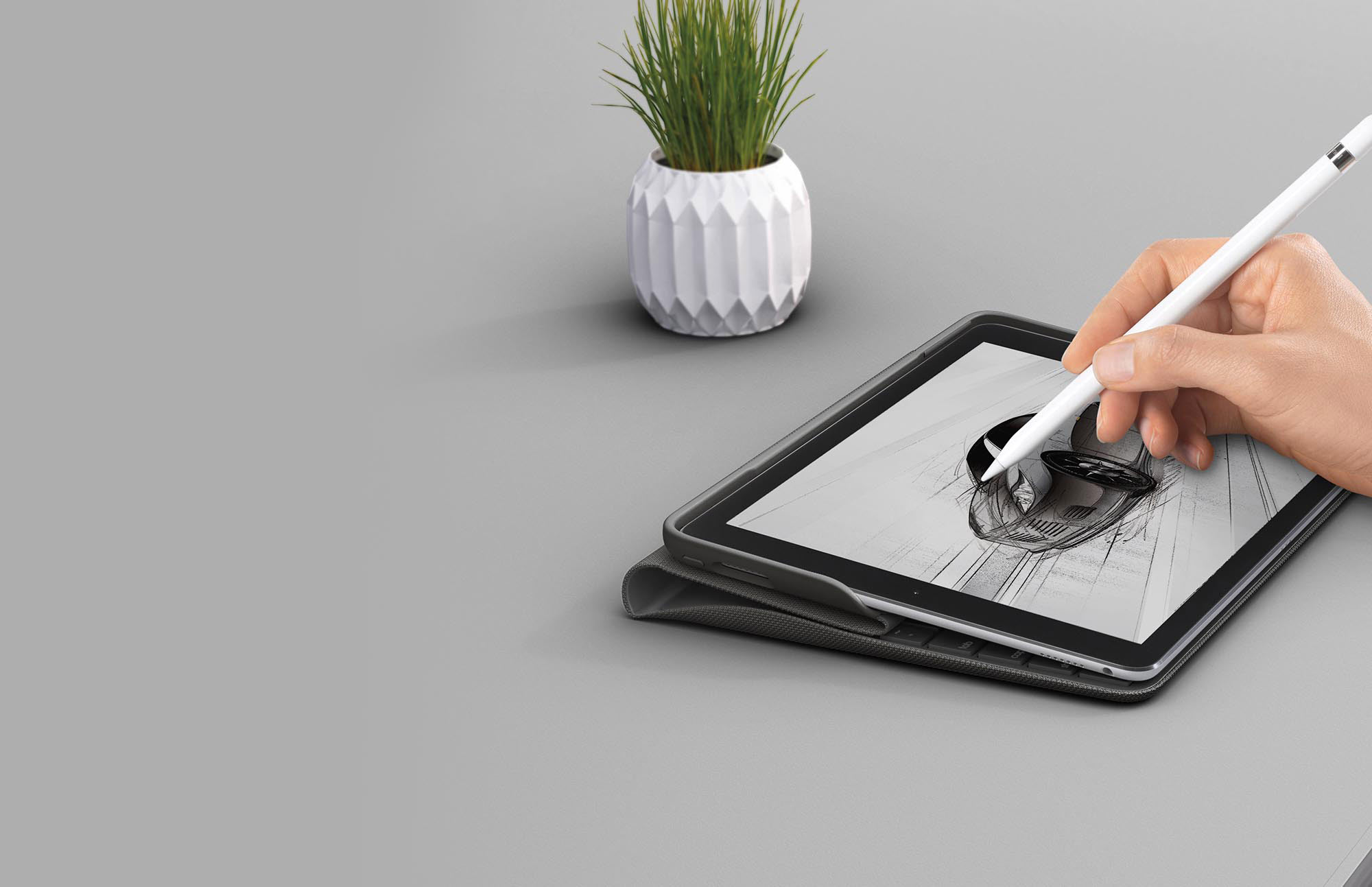 You can remove the iPad from the case, too, but doing so is a hassle, meaning that the Create is best suited for those who place enough of an emphasis on keyboarding to leave it in place all the time. For those users, it’s a winner, despite its added bulk.

The Surface computers have certain notable features, such as a metal flip-out stand in the back, a detachable keyboard that doubles as a screen cover, and a spot on the outside to store a stylus.

Zagg’s $149.99 Slim Book Pro keyboard case is similar. It incorporates a flip-out stand in the back, though with a hinge along the bottom edge instead of in the middle, which helps it rest more comfortably on your lap. 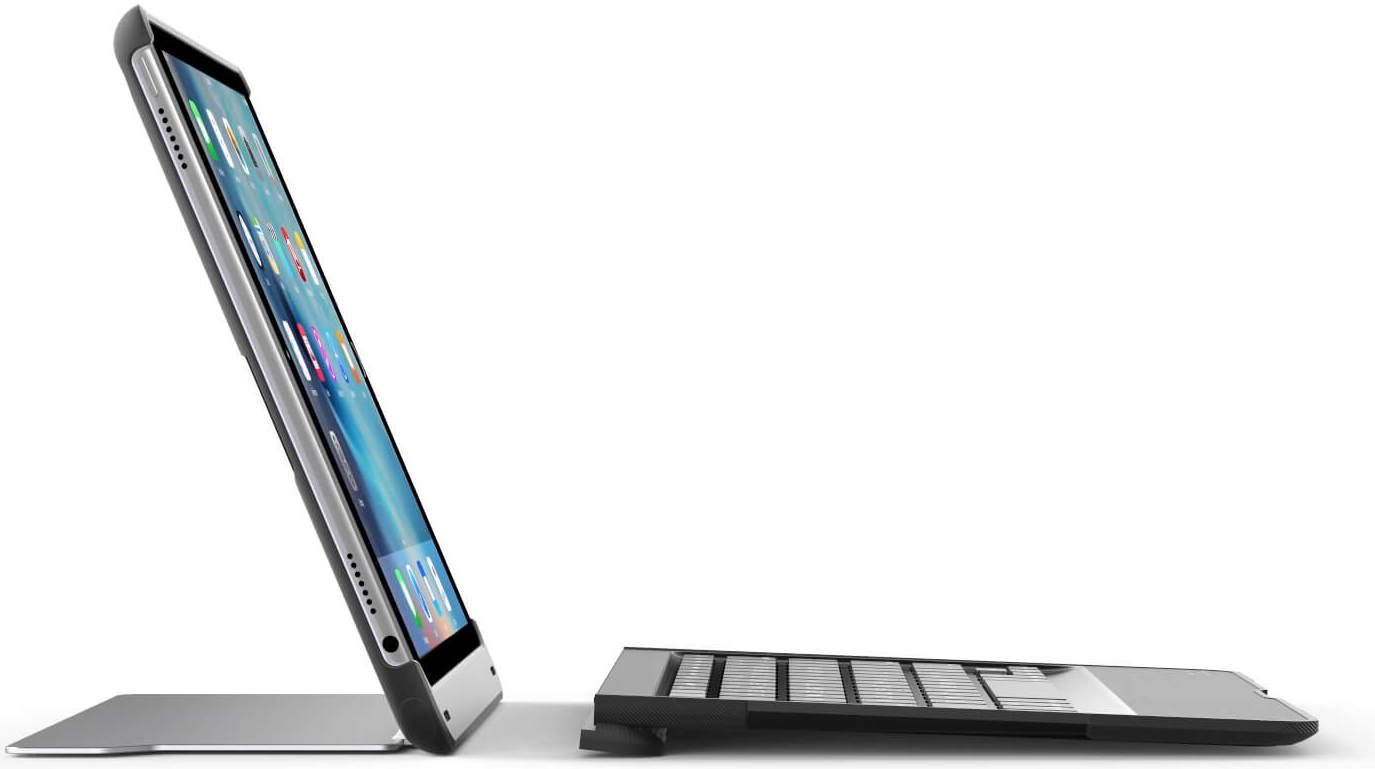 Zagg built a loop-style Apple Pencil holder into the back, along the upper edge. It’s handy, but I worry about the Pencil becoming damaged over time as the iPad is repeatedly thrust into bags or backpacks. Logitech has the right idea by storing the Pencil inside its case. The main benefit of the Slim Book Pro’s design is the flexibility to use the iPad with or without the attached keyboard. With Logitech’s Create, that’s harder to pull off. If you just want to watch a video at a desk or table, the Slim Book Pro’s flip-out stand keeps the iPad conveniently erect.

As with the Create, though, be prepared for a bit of added bulk.

Zagg Rugged Book Pro — Think of this accessory as a beefy Slim Book Pro that can take a lot more punishment. It has all the same features and even the same price, but offers increased protection. 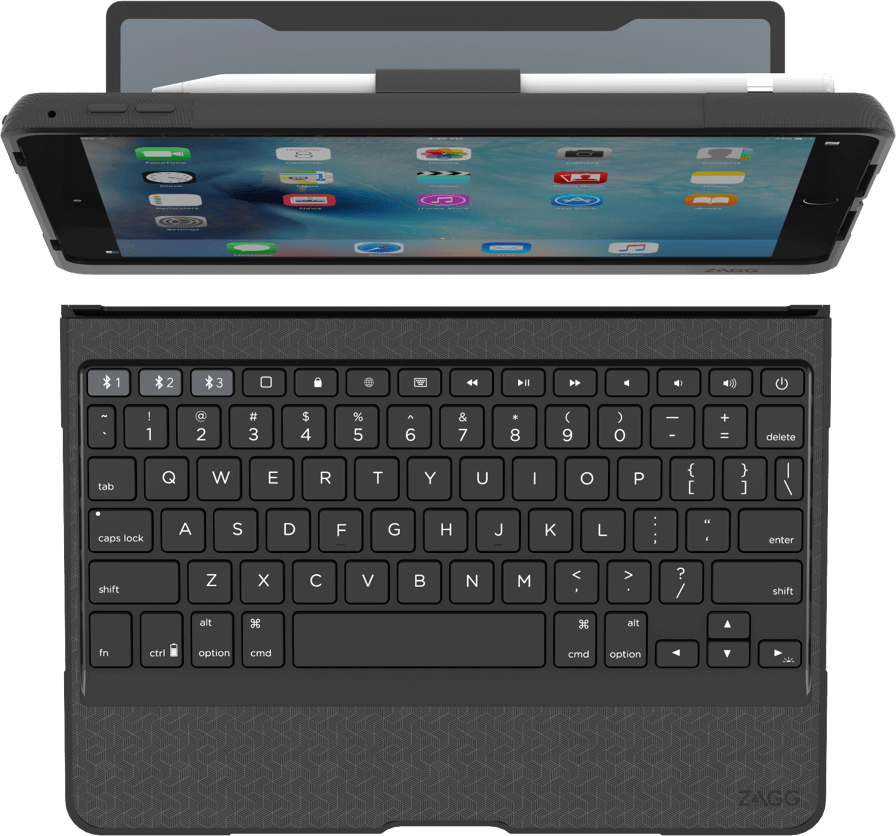 There isn’t much more to say, except for one geeky observation: the back of the Rugged Book Pro is molded in such a way as to incorporate a large “X” that will delight fans of Marvel’s X-Men comic books. This is the iPad Pro keyboard case for Professor Xavier. Zagg Rugged Book — A precursor of sorts to the Rugged Book Pro, Zagg’s Rugged Book case is the most laptop-like of the products reviewed here.

As with the other Zagg products, the $129.99 Rugged Book includes a case-like component that envelops the iPad. The case/iPad combo fits into a hinged dock that’s part of a separate keyboard component. Thus joined, these pieces open and shut exactly like any laptop would. I’m crazy about the keyboard, for reasons I can’t entirely convey. It just feels good, and my fingers fly on it with exceptional accuracy even though it’s scrunched like other iPad-specific keyboards. Your mileage may vary.

You can easily detach the encased iPad from the keyboard for touch-only use, as with the other Zagg products, but this one has an added twist. You can drop the tablet back into the dock, but facing in the other direction, thereby turning the keyboard into a stand (Zagg calls this “video mode”).

The Rugged Book is by far the bulkiest of all the products in this roundup, which I see as a good thing — the iPad is incredibly well-protected. If you’re expecting to use your iPad in places where it could take a beating, this is the keyboard case for you.

Making the Case(s) — The iPad undeniably has some issues as a productivity machine when compared to a Mac. Apps are simpler and less flexible, and iOS itself feels limited when compared to macOS. That’s why I won’t make an iPad my primary or sole computer.

On the other hand, the 9.7-inch iPad Pro has become invaluable to me for mobile productivity. It’s the device I grab when I don’t want to be weighed down, yet it lets me do much of what I’m able to accomplish on a Mac. A good keyboard case is an essential part of this mobile-productivity puzzle.

Though none of the accessories I’ve reviewed here is perfect, you won’t go wrong with any of them. The trick is to find the one that’s best for your needs. When I’m bicycling, for instance, I like using the Zagg Rugged Book because it lets me literally toss my tablet into my pannier bag without a second thought.

As a fan of Incase’s Origami Workstation, though, I’ve settled on Studio Neat’s Canopy as my favorite add-on for the 9.7-inch iPad Pro. A full-size keyboard makes a difference, yet the Canopy is compact when folded – quite a bit more so than the Apple Wireless Keyboard with the Origami. I’m delighted with the Canopy and recommend it highly.