But I realized Elago had concocted something brilliant when a buddy last week bestowed the product upon me — a thoughtful gesture after a recent death in my family — and other friends around a taproom table erupted with delight and a bit of envy. 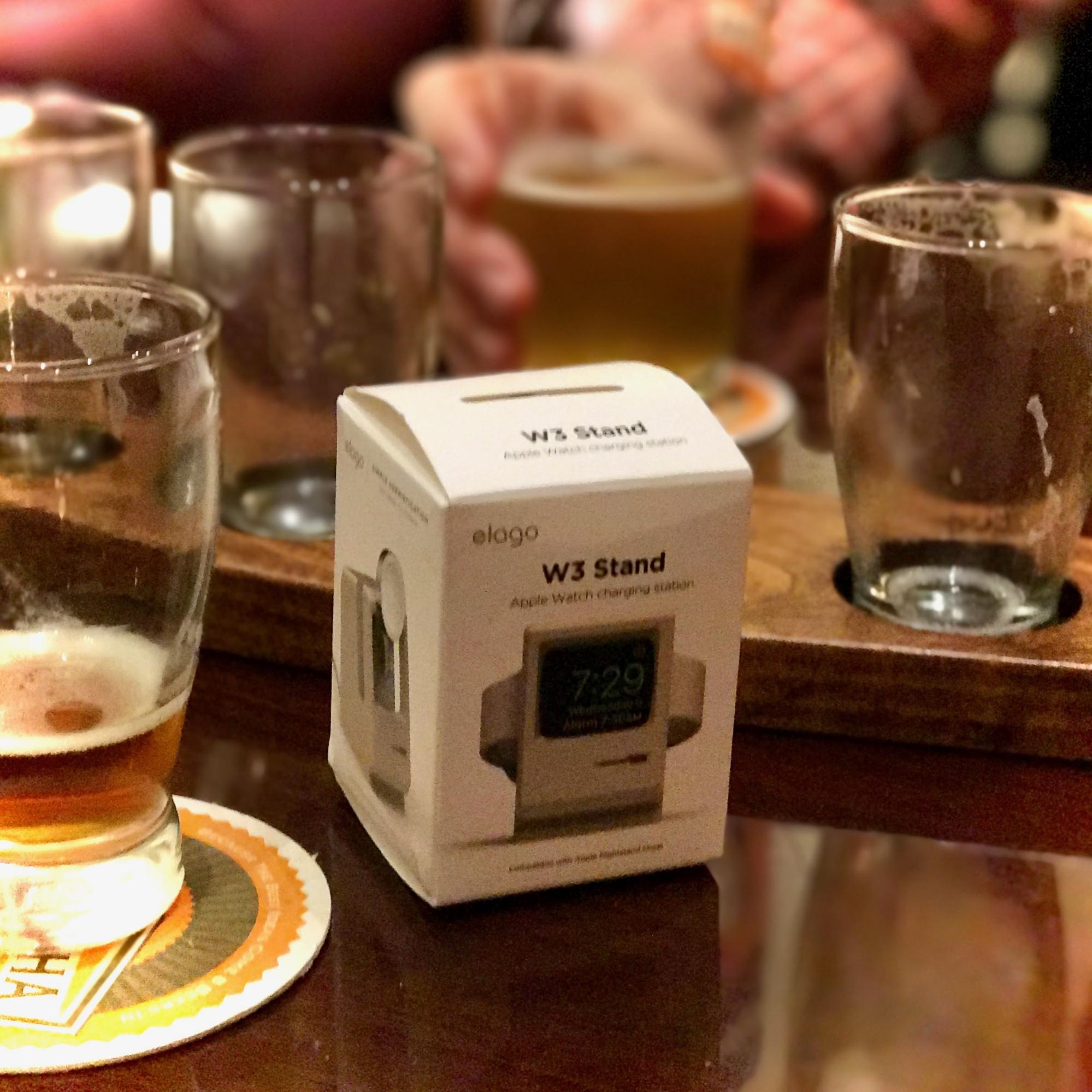 I was even more surprised later that day when my wife spotted the accessory on my desk and went gaga over it.

You must understand a couple of things about my wife: She does not own an Apple Watch, has no interest in ever getting one, and has never been steeped in Apple lore. She adores her MacBook Air, but only in a utilitarian sense.

Yet, hovering and cooing over the W3, she told me she wanted one – just because. So did I when I first heard about it. After all, I own a nonfunctional 128K Mac, a decorative prop that has a place of honor in my home office right near my Power Mac G4 Cube. 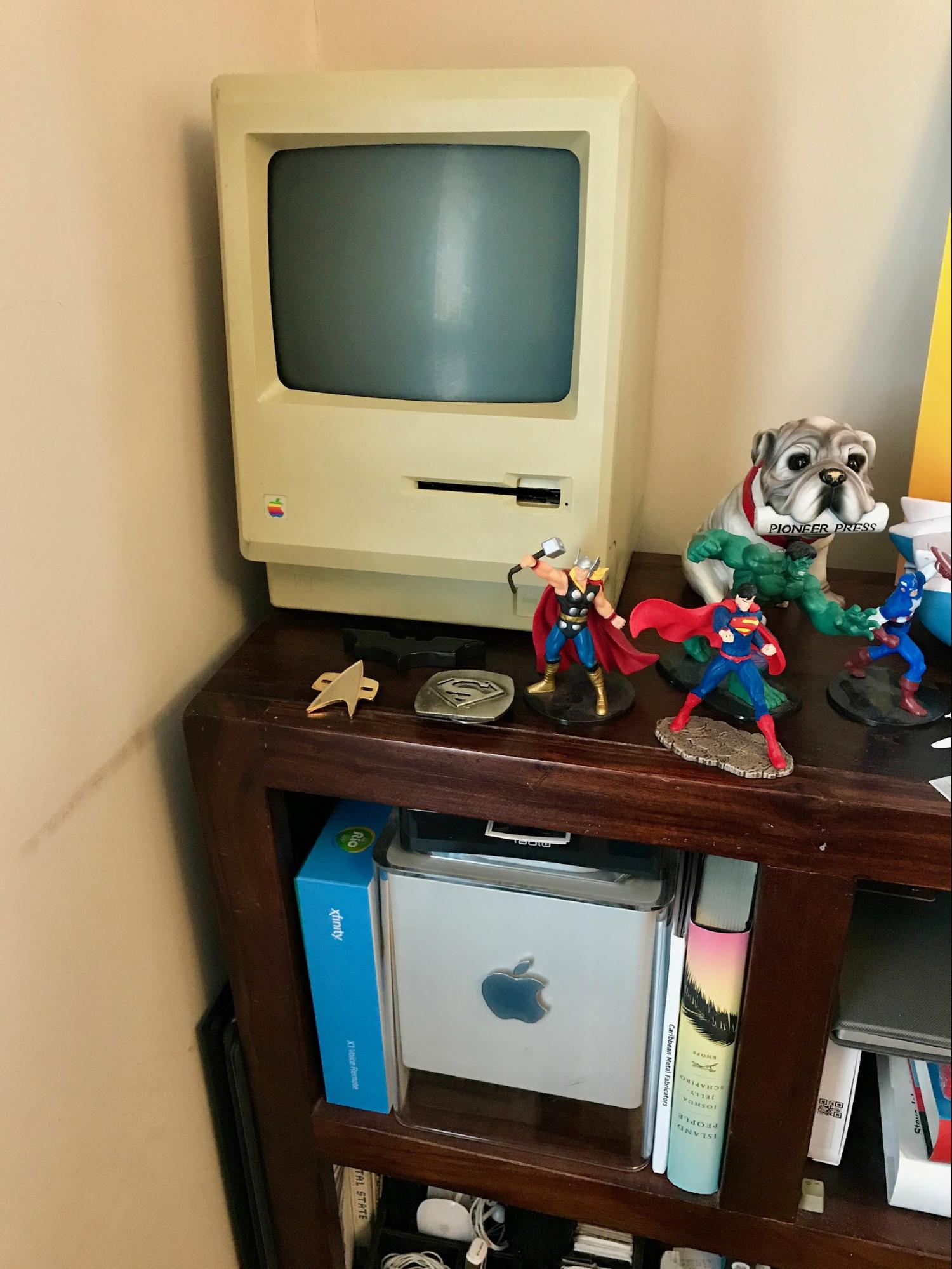 The Elago W3 fits right in at Julio Geek Central. I have the $14.99 tan-colored model that approximates the color of the original Mac. Elago also sells a $15.99 dark-gray version, which is a strange color choice in the Mac sense, but matches darker-colored watches and straps.

The stand is a simple yet substantial little thing made of soft, sturdy rubber. It’s a mini-Mac, but with a vertical slot for the Apple Watch to slide in. 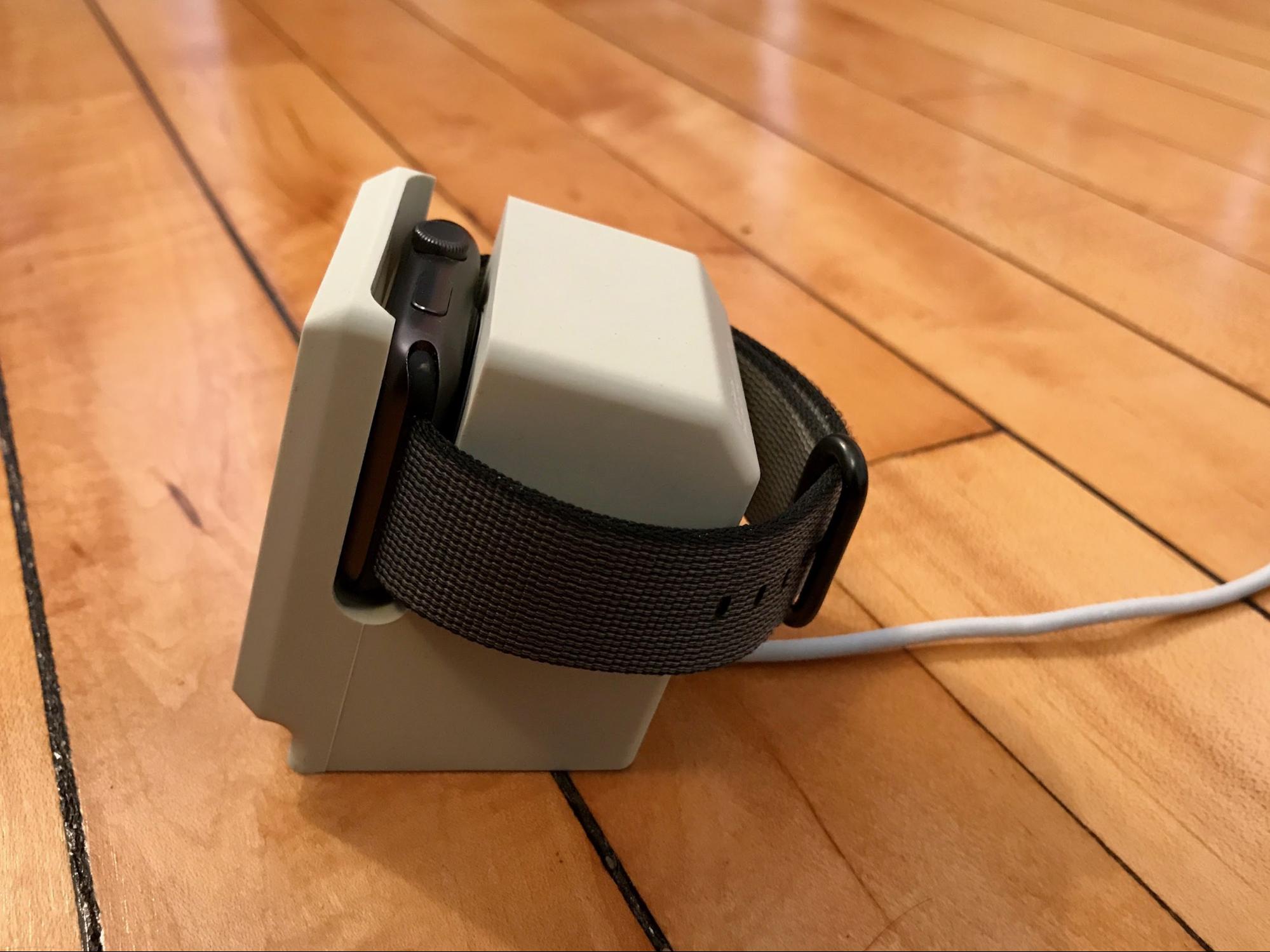 Within the stand, there’s a circular cutout for Apple’s watch charging pad. 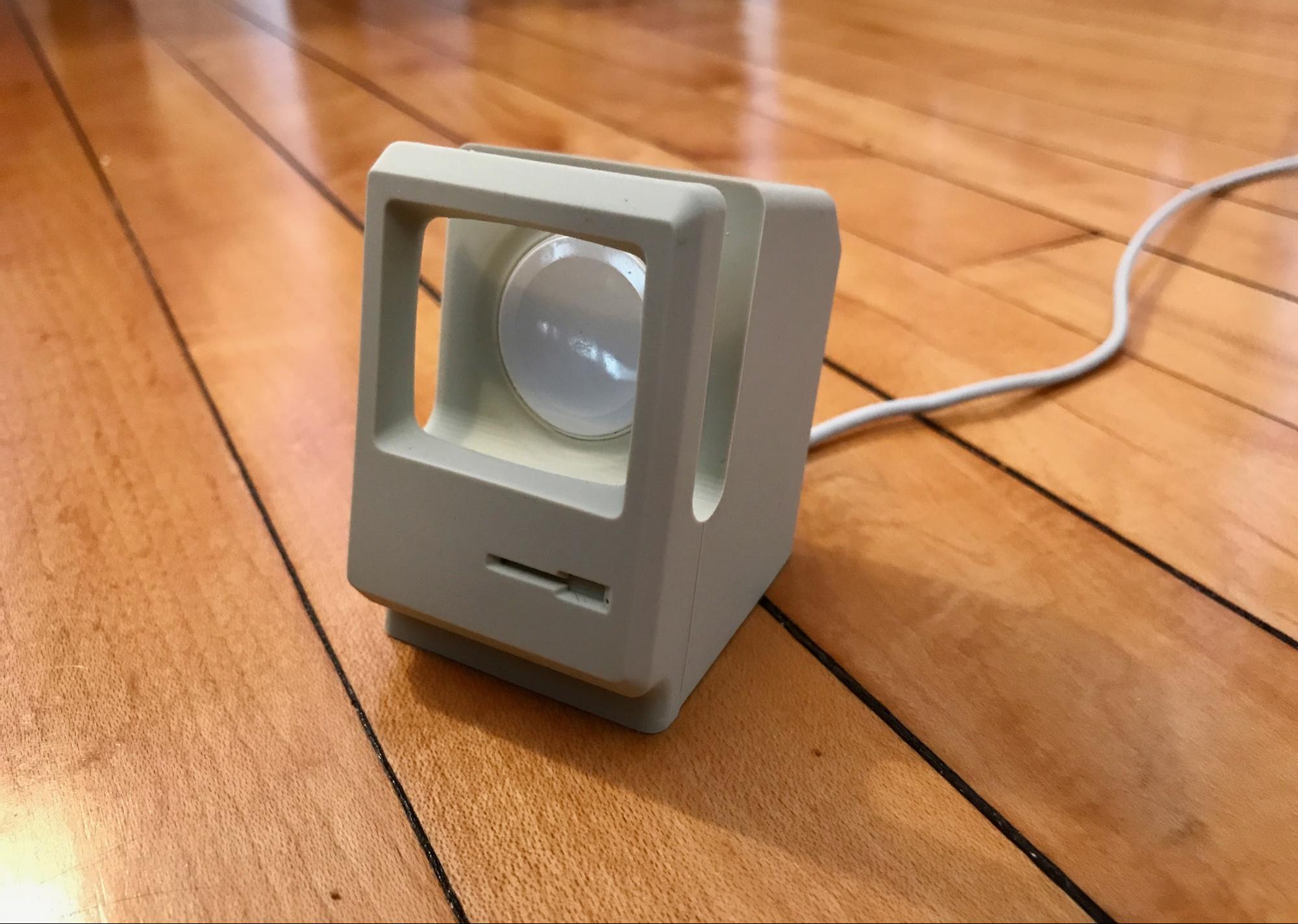 The W3’s cable threads downward through the accessory and out the back, mimicking the look of the classic Mac’s power cable. 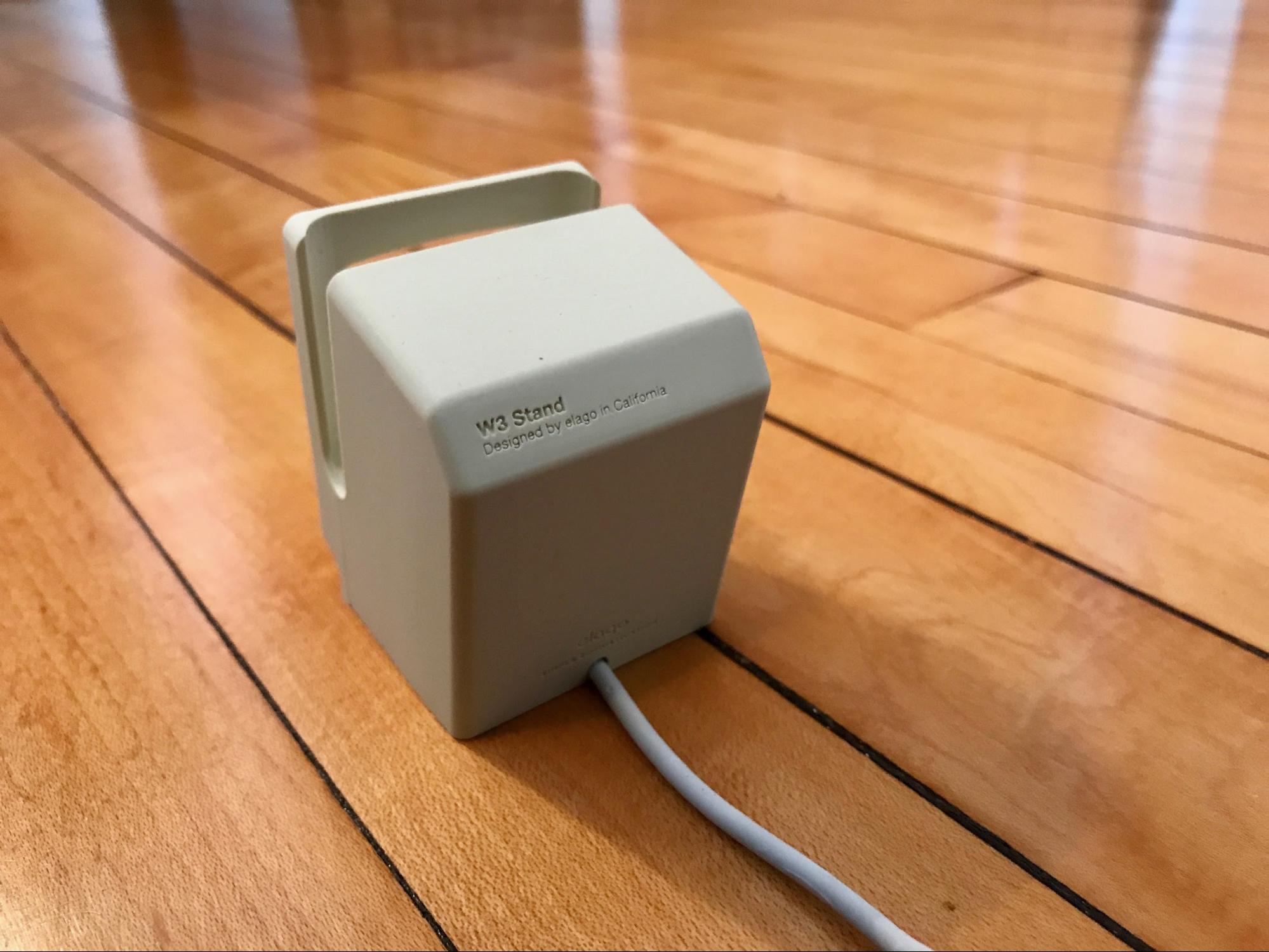 The stand’s screen is just a cutout, so when the Apple Watch drops into place, its face becomes the actual, functional “Mac” display.

The Apple Watch sits on its side, which activates Nightstand mode and transforms the W3 into a nifty bedside clock with a classic-Mac look and feel. It even has details such as a faux floppy-disk slot, complete with a tiny paperclip-eject hole, but no Apple logo that might attract legal attention. 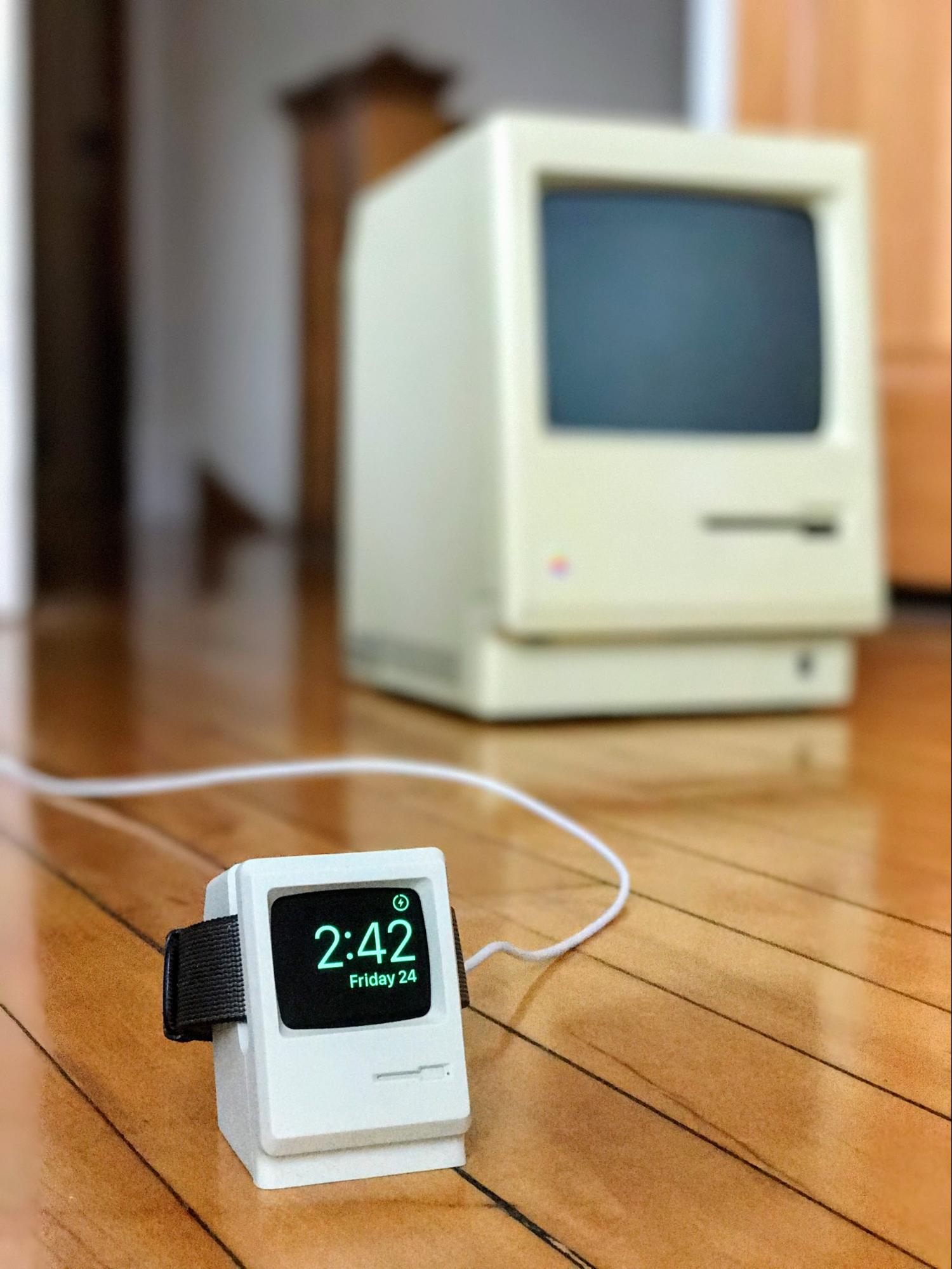 I’m using the Elago in the bedroom with a first-generation Apple Watch (my Series 2 watch charges up in my home office on the far-more-utilitarian Griffin WatchStand Powered Charging Station that also charges my iPhone). I put the original Apple Watch on my night table in Airplane mode to keep activity to a minimum and left it there as a permanent fixture. In fact, I am experimenting with using the Apple Watch strapless to heighten the classic-Mac
effect: 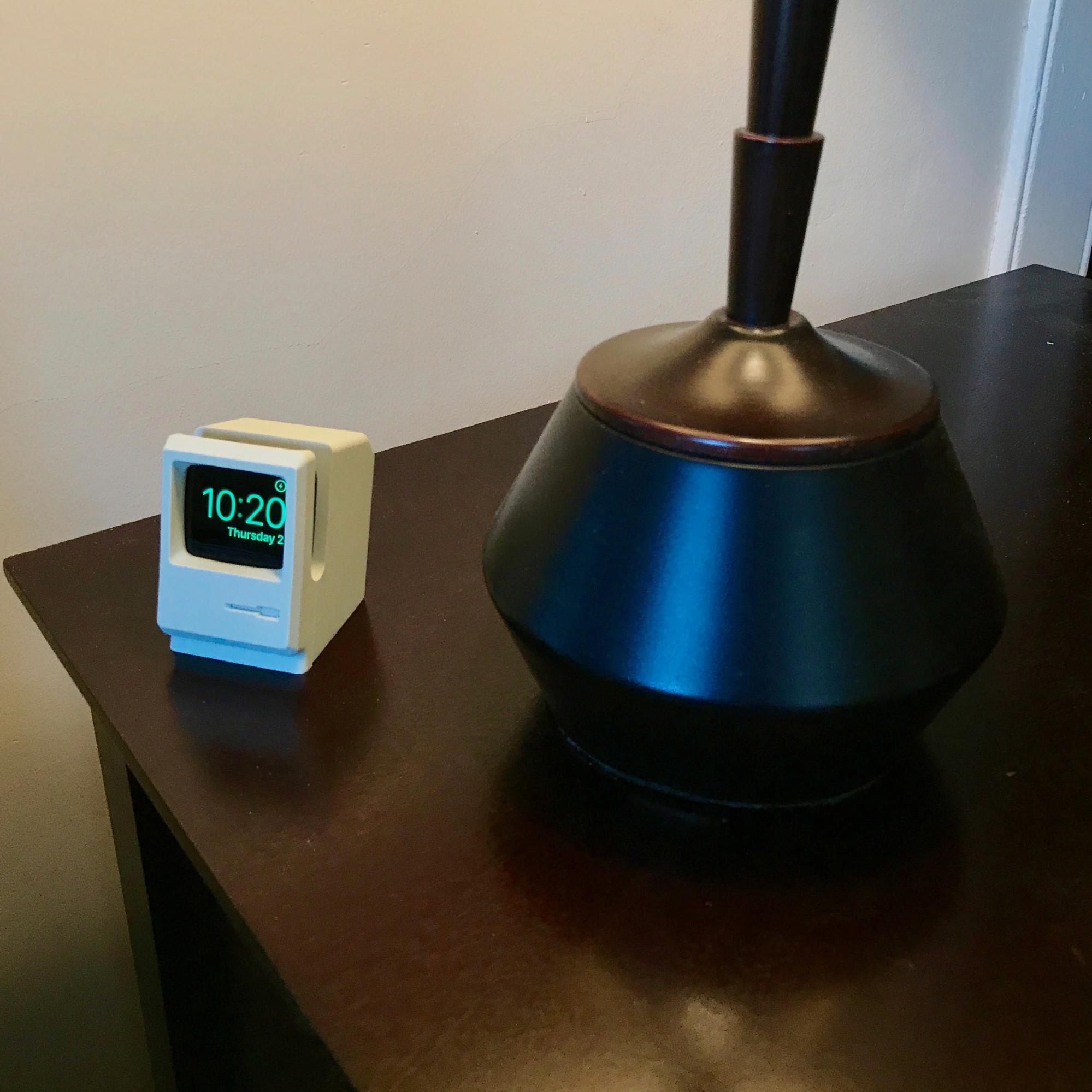 But I suspect the mini-Mac clock will quietly migrate to my wife’s side of the bed before long. That’s fine, anything to foster marital bliss.

I hope whoever came up with this cute product at Elago got a bonus. And I wonder if sequels might be in the works — a Bondi Blue iMac charging stand, perhaps?