The other morning, I was rudely awakened when my wife, a teacher and the household weather hawk, started panicking about a tornado watch, which means that conditions are ripe for twisters. It soon became a tornado warning, which means that one is imminent. Not the best news to get first thing, particularly before coffee.

Tornados are no joke, especially here in Tennessee. A severe tornado in 2008 destroyed part of my town and killed several people. It was so bad that then-President Bush visited to survey the damage.

After that, the town installed a warning siren, but this time it was drowned out by the noise of high winds and pouring rain on the roof. Thankfully, I had a battery-powered radio tuned into a weather station and the local TV news to stay up to date on the storm’s direction. It didn’t end up hitting us, but I would have liked a little more warning.

When it comes to winds so powerful they can toss around cows, you can’t have enough warnings to take cover. You know how in Star Trek, when something bad is going down, the entire bridge turns red? That gave me an idea of how I might use the Philips Hue light bulbs (see “Getting Started with the Philips Hue Smart Light Bulbs,” 1 August 2016).

Apple’s HomeKit automation framework is great, but limited in what it can do. For its line of Hue bulbs, Philips provides its own API with many more capabilities, such as integration with the Internet automation service IFTTT (see “IFTTT Automates the Internet Now, but What Comes Next?,” 20 December 2013).

I initially thought about using the Philips Hue Severe Weather Alert applet, but the National Weather Service considers all sorts of things “severe” that fall well below the level of “There’s a tornado coming!” So I went looking for a more customizable solution and found it in the form of IFTTT’s Weather Underground integration.

It doesn’t include severe weather alerts, but it can use wind speed as a trigger. I made an IFTTT applet that turns on all my Hue lights and makes them red when the wind speed nearby exceeds 60 miles per hour (hurricane wind speed starts at 73 miles per hour, so I set it to 60 to be safe). Unfortunately, IFTTT no longer allows sharing of applets, so here are the steps to make your own: 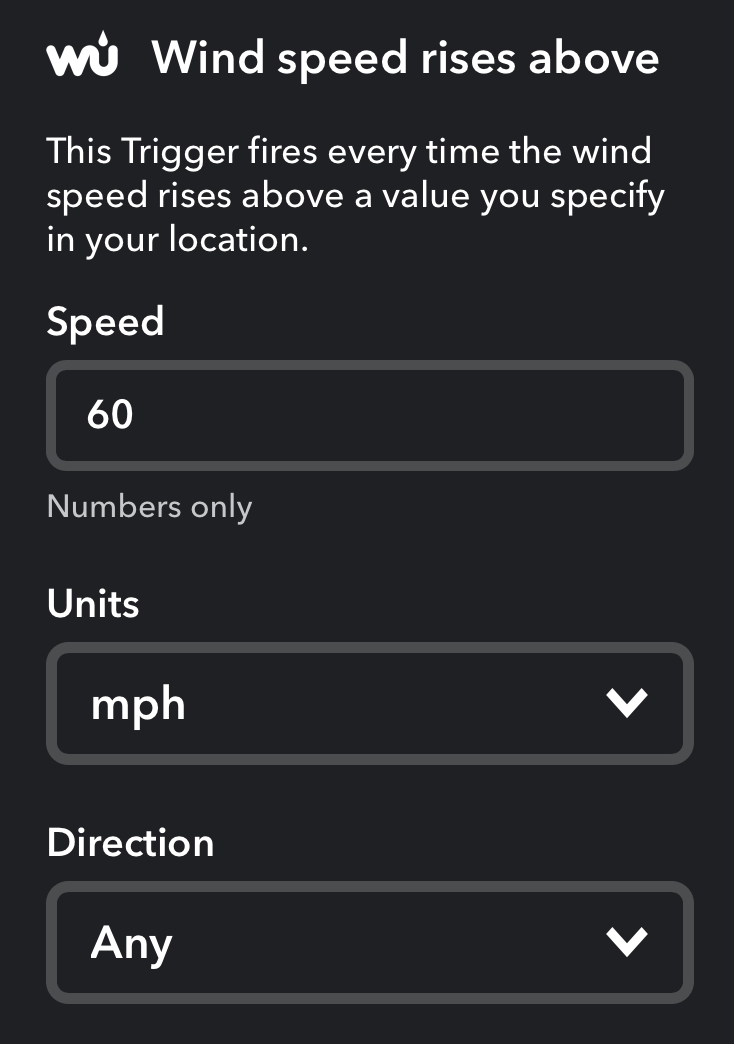 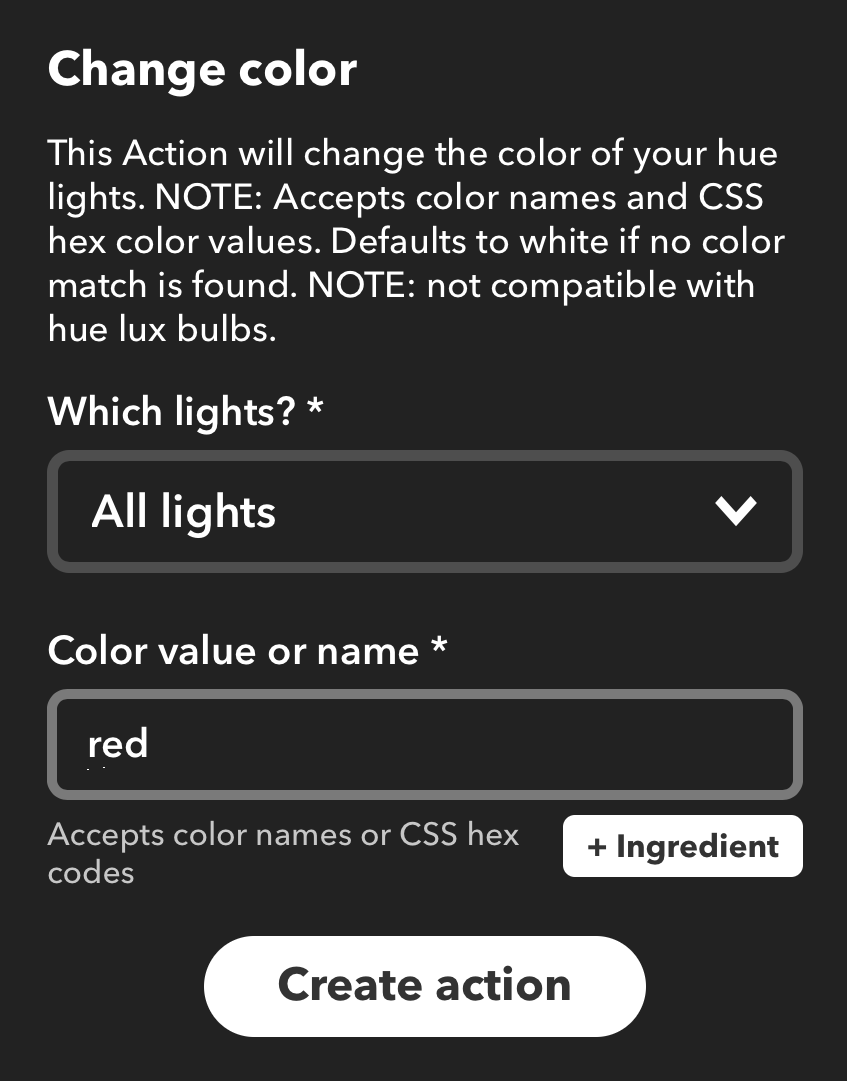 Now, when wind speeds reach 60 miles per hour near you, all your lights should turn red. The next question is, how can you test this setup without an approaching hurricane or tornado?

Of course, I wouldn’t recommend using this system as your only tornado or hurricane alert, since there are a lot of “moving parts.” If your power or Internet service cut out, as would be likely in high winds, this system wouldn’t work. Plus, latency could cause it to not work in time. (IFTTT says it could take up to an hour for an action to trigger, although my tests above worked much more quickly than that.) Unfortunately, I won’t know for certain how well this system works until we get high winds again. However, I’m willing to bet that I’ll see it in action before the spring is over.

What if you don’t have Hue bulbs, or would like an additional warning that you’ll see even if you’re not home? Create the same IFTTT automation, except change the “that” part to the SMS action and choose Send Me an SMS. The default message tells you the wind speed, but I prefer something a bit more to the point. 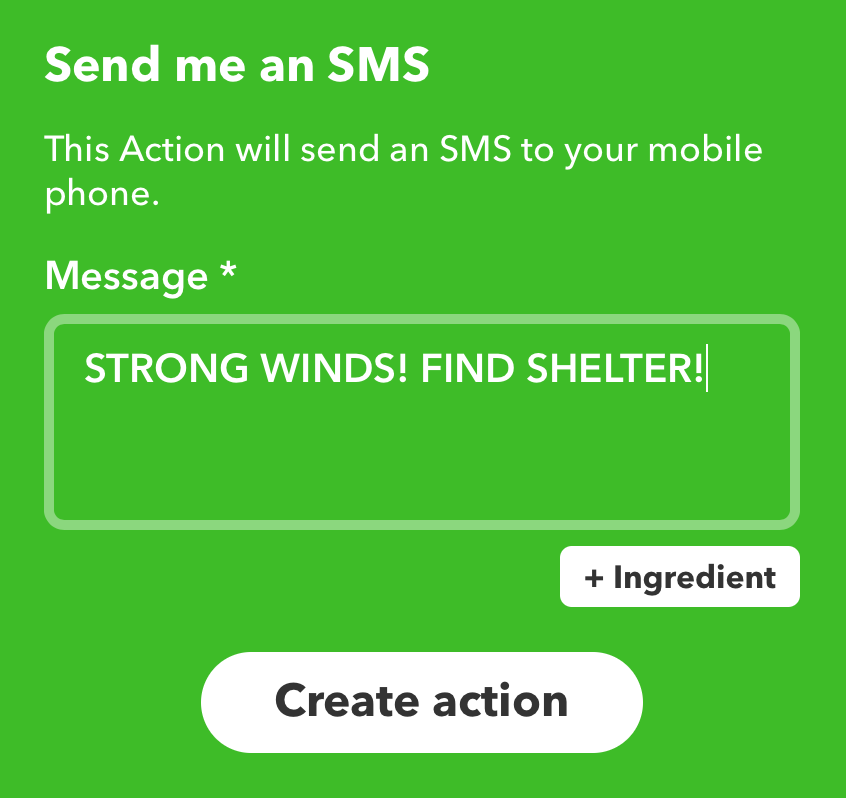 Although this is a good real-world example, I’m sure you can come up with other ways to use IFTTT with Hue bulbs. For instance, Philips provides an IFTTT automation that turns your lights blue when it’s raining. As amusing as that might be once or twice, I avoid such automations for fear of “haunted house syndrome” — things happening in your house seemingly at random. But if you’re interested, spend some time
exploring IFTTT to see what other triggers inspire you.