The most significant change in 10.12.4 is the addition of Night Shift, a feature previously available only in iOS that automatically shifts the colors of the screen to the warmer end of the spectrum after dark. Night Shift, much like the independent f.lux utility, is designed to help you sleep better by reducing the amount of blue light that tricks your body into thinking it’s earlier than it is. Look for it in System Preferences > Displays and Notification Center.

Beyond the addition of Night Shift, macOS 10.12.4 brings with it a few international improvements. For those who follow cricket, Siri can now provide scores, schedules, and player rosters from the Indian Premier League and the International Cricket Council. Apple added dictation support for Shanghainese. And the update improves right-to-left language support (such as for Arabic and Hebrew) for the Touch Bar, toolbar, and visual tab picker in Safari.

Although we don’t know the full extent of the changes, Apple promises that 10.12.4 resolves several PDF rendering and annotation issues in Preview. Those fixes are likely in the troubled rewrite to PDFKit that debuted in Sierra; we can hope the improvements will make life easier for developers who work with PDF (see “Sierra PDF Problems Get Worse in 10.12.2,” 2 January 2017, and “Apple Releases macOS Sierra 10.12.3, iOS 10.2.1, tvOS 10.1.1, and watchOS 3.1.1,” 23 January 2017). Another fix claims to resolve a bug that prevented content from appearing in Mail messages.

On the enterprise side, 10.12.4 provides a handful of improvements and fixes. Apple says that the update:

watchOS 3.2 — Less exciting is watchOS 3.2, which is a 225 MB update that you install via the Watch app on your iPhone (in Watch > Settings > General > Software Update). Remember that the Apple Watch must be on its charger, charged to at least 50 percent, and within range of your iPhone, which itself must be on Wi-Fi. Don’t start installing if you’ll want to use the watch again within an hour or so — watchOS updates take surprisingly long to load. 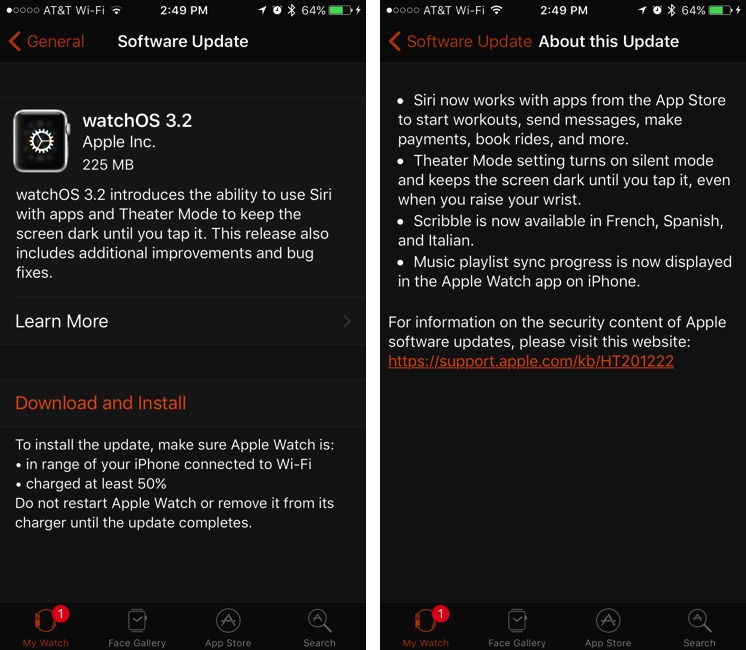 The main addition in watchOS 3.2 is Theater Mode, which you toggle via a new button in Control Center (swipe up from the bottom of the screen). When enabled, Theater Mode turns on silent mode and disables the standard Raise to Wake behavior, leaving the screen off until you tap it. That prevents the Apple Watch from lighting up in a dark theater if you raise your wrist for any reason. 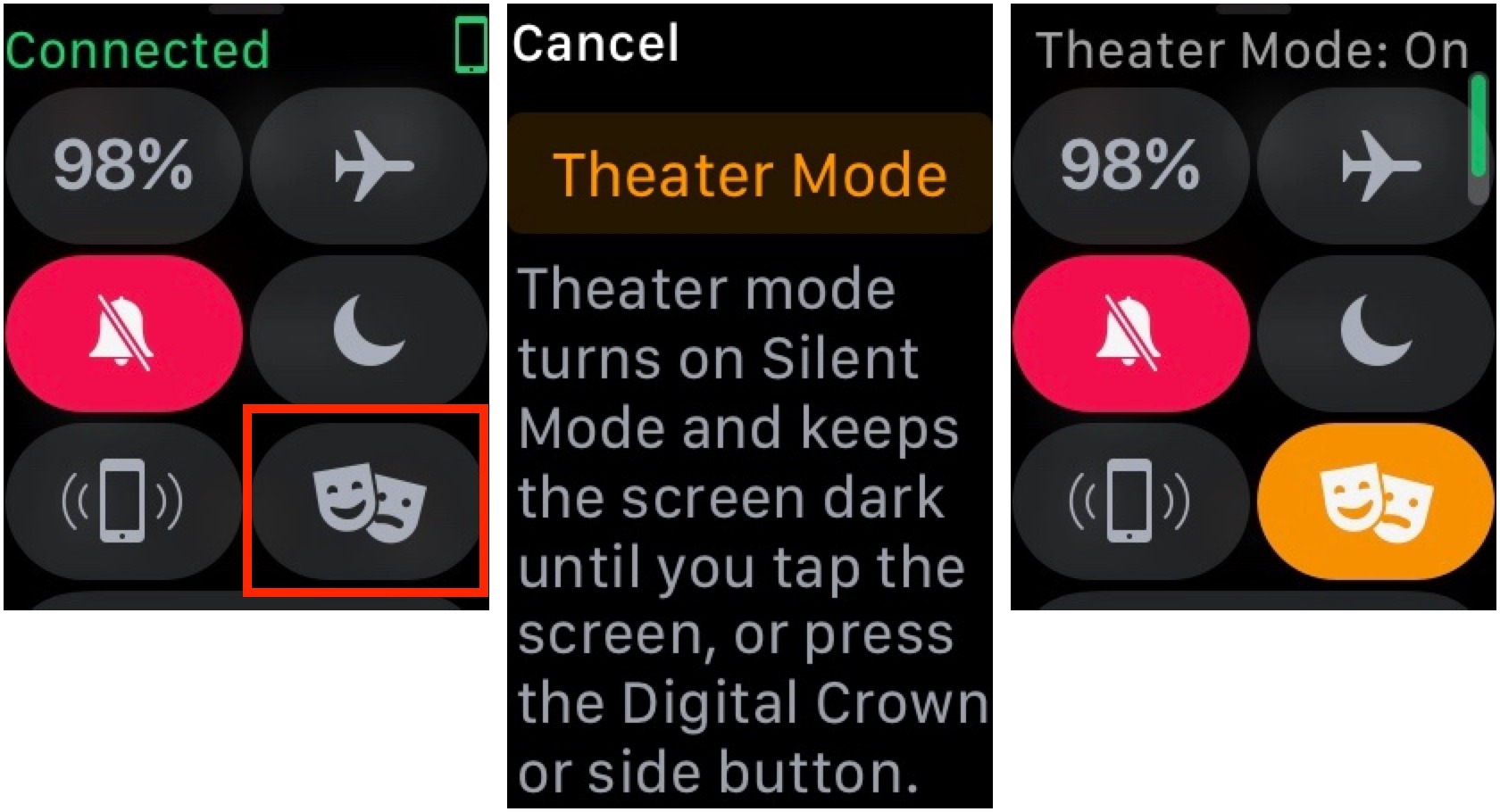 Apple also expanded the Apple Watch’s support for Siri to include independent apps, so you can now theoretically use Siri to start workouts, send messages, make payments, book rides, and more. Siri support in non-Apple apps extends only to a few categories of apps, and developers have to support it, so don’t expect that you’ll be able to talk to every app.

On the international side of things, Scribble is now available in French, Spanish, and Italian. And, for those who have been frustrated by the lack of feedback when syncing music to the Apple Watch (which seems to take forever!), music playlist sync progress now appears in the Watch app on the iPhone.

As with every operating system update these days, there are a slew — 31 all told — of security fixes worked into watchOS 3.2.

tvOS 10.2 and Apple TV Remote app — Finally, Apple released tvOS 10.2, which mostly provides things of interest to developers (and 39 security fixes), but does offer one nice refinement for users. You can get the tvOS 10.2 update on your fourth-generation Apple TV via Settings > System > Software Updates > Update Software.

tvOS 10.2 now provides what Apple calls “Accelerated Scrolling support” for apps. In practice, this means that you can swipe up or down on the far-right side of the Siri Remote’s touchpad to navigate quickly through long lists. In the screenshot below, the jump points appear as dots, each one representing a page in the list. 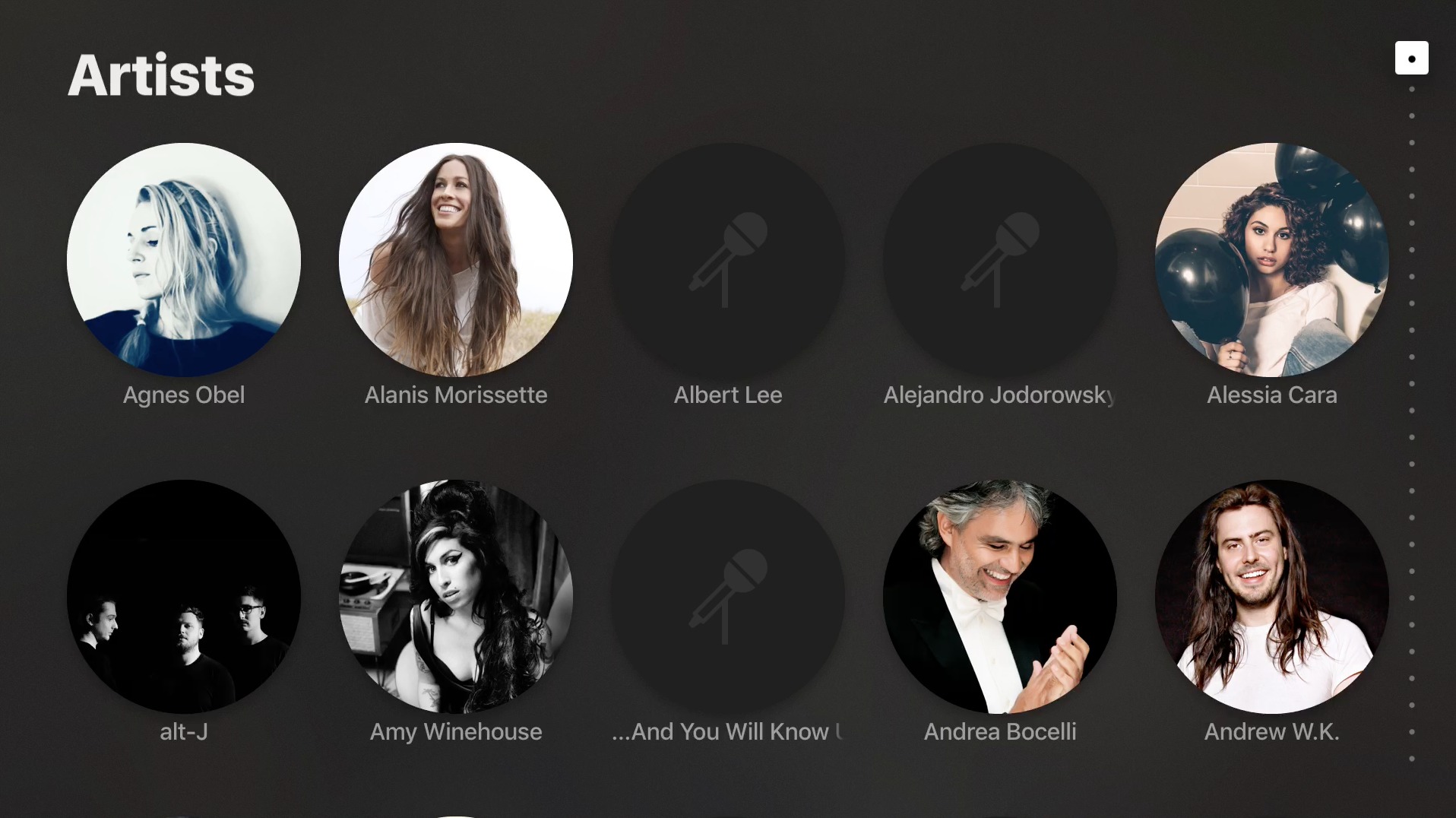 Most of the user-facing improvements to the Apple TV are found in the Apple TV Remote app, which Apple updated to version 1.1. It has now been optimized for iPad support, though don’t get too excited: it seems to be essentially the same as the iPhone version, just larger (that’s a whole lot of black in the screenshot below). When I downloaded the app on my iPad, I still had to filter the App Store search results for
“iPhone only” apps to be able to see it. 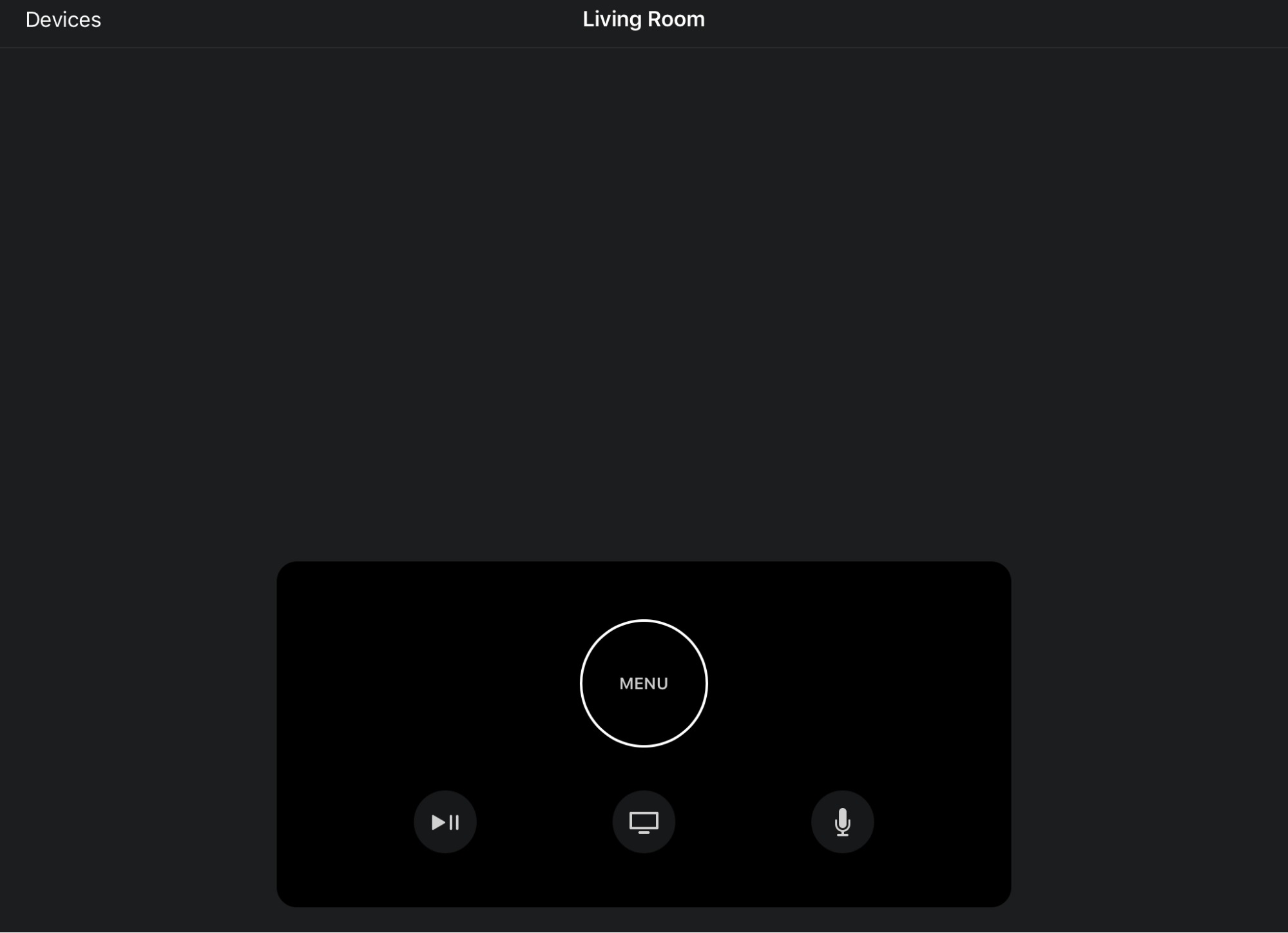 Another improvement in the Remote app is an enhanced Now Playing screen. While playing media, you can tap Details in the upper right to view the currently playing media, along with direct media controls, such as pause and rewind. If you swipe up on that screen now, you can see additional detail. For instance, doing so when playing music shows your Up Next queue. 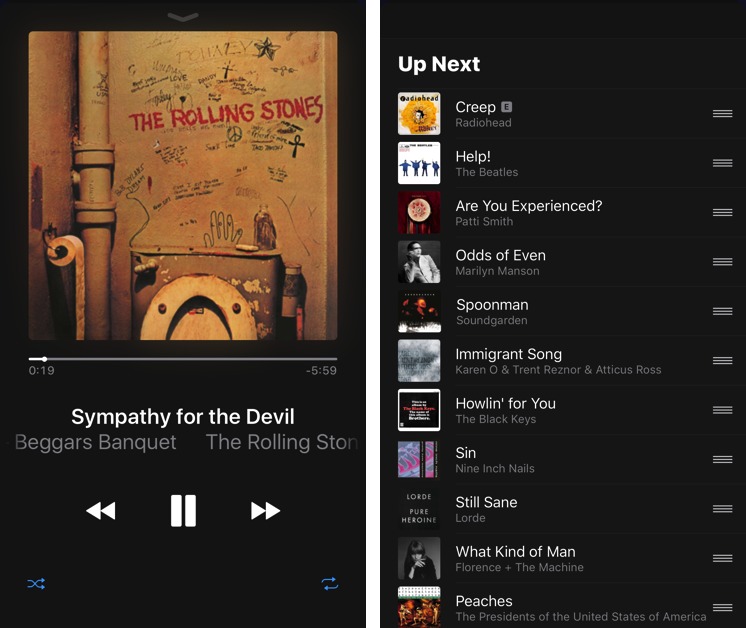 And swiping up on Now Playing while watching a movie shows additional movie information and a chapter list. 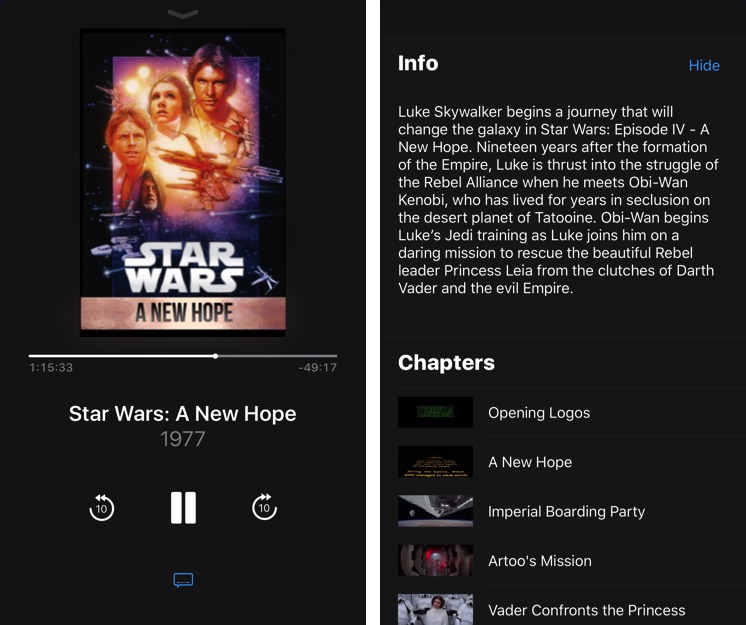 The Update Question — As always, the question we’re asked after one of these mega-release days is if users should jump on the updates or not. We’ve installed them all and haven’t noticed any serious problems in initial use, but that’s relatively meaningless. Our take is that there’s no real reason to install any of these updates immediately unless you’re suffering from a problem expressly addressed by them. However, given the number of security fixes involved in each one, we do strongly recommend that you update within a few weeks.