I love a good mystery… as long as it has a solution. The case of the Library’s changing modifier key had me stumped for a while, but thankfully, our buddy Rob Griffiths figured it out.

Starting with OS X 10.7 Lion, Apple hid the home folder’s Library folder (~/Library) to prevent users from meddling in it and causing trouble (see “Dealing with Lion’s Hidden Library,” 20 July 2011). We’ll ignore for the moment the question of whether this was a good move. To access that folder, you had to hold down the Option key and choose Go > Library in the Finder. If you were sufficiently irritated by having to do this, as many of us were, there was a Terminal command you could run to reveal the ~/Library folder within Finder windows permanently.

(Remember, there are multiple Library folders in macOS; ~/Library is the one in your home folder. Oddly, Apple leaves /Library and /System/Library visible, even though users should never mess around in them.)

In OS X 10.11 El Capitan, Apple pulled back a bit on pretending that we users weren’t capable enough to work in ~/Library, adding a Show Library Folder checkbox in the View Options window for the home folder. That checkbox appears only when your home folder is displayed in the frontmost Finder window, and if you’re in column view, you might need to select a folder inside the home folder. When that checkbox is selected, ~/Library appears in Finder windows, but Library does not appear in the Go menu unless you hold the Option key down too. In macOS 10.12 Sierra, Apple made it so that checkbox adds Library to the Go menu too, and in 10.12.3, also added a
keyboard shortcut — Command-Shift-L. 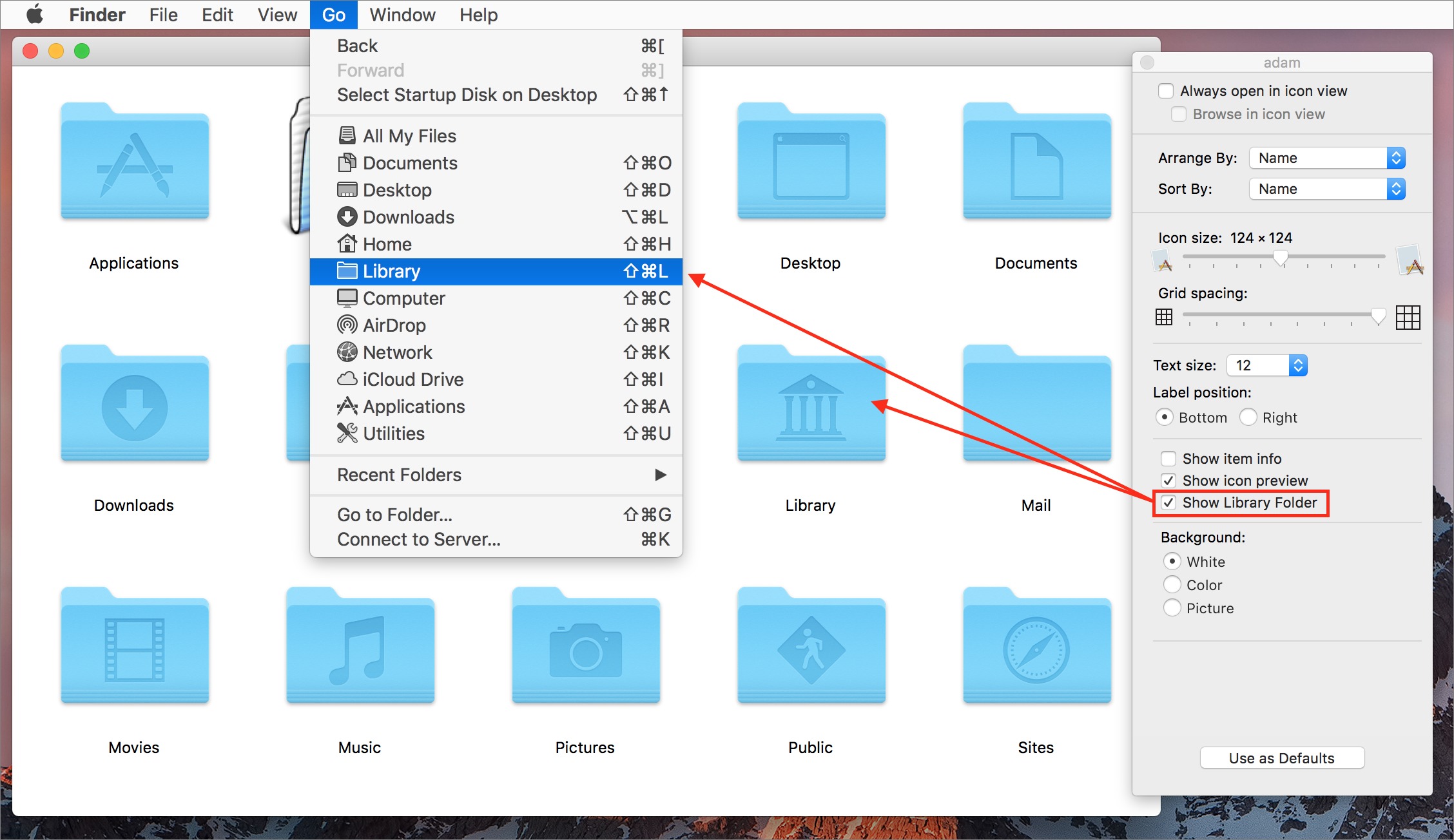 However, Sierra is also where things started to get funky. For many people, including me, the old Option key trick stopped working in Sierra. That wasn’t a problem for me because I had permanently revealed my ~/Library folder long ago and seldom used the Finder’s Go menu. But I did notice that Option had stopped showing the Library menu item, and when Kirk McElhearn wrote a blog
post about how the key had changed to Shift in one of Sierra’s minor updates, I was pleased to discover that, indeed, the Shift key now worked to show the Library folder in the Finder’s Go menu.

I didn’t explore further because Kirk’s solution worked fine for me, and it solved Tonya’s confusion over the loss of the Option key trick as well. Thinking I was sharing a neat little trick, I mentioned it briefly in an email message to Take Control readers. Little did I realize the can of worms I was opening.

Several people replied to say that Shift did not work for them, and Option still did. Lauri Reinhardt, who does support for Take Control, tested before passing those messages on to me. She found that, while the Shift key worked initially, after she toggled the Show Library Folder checkbox in the View Options window, Shift stopped adding Library to the Go menu, and Option started working again. Nothing she could do would make the Shift key work anymore. I confirmed that Shift still worked on both my iMac and my MacBook Air, toggled the checkbox on my iMac, and found exactly what Lauri had. A new test account showed that Option really was still the right key, but why had it been Shift for a while? Madness!

I was stumped, so I tracked backward from Kirk’s post to Michael Tsai’s initial Twitter thread and then followed a link to a post by Rob Griffiths that explained the situation.

Rob’s discovery was that relaunching the Finder (Control-Option-click its Dock icon and choose Relaunch) puts the Finder in a weird state where the Shift key takes over from the Option key. I was able to reproduce that as well. Doubly weird — this state persists across restarts! It’s a bug, and Rob reported it, so we hope Apple will fix it in a future macOS update.

My suspicion is that this weird Finder state, which may date back to the Sierra betas, can be triggered in ways other than relaunching the Finder. Quitting or force-quitting the Finder from within Activity Monitor doesn’t seem to do it, but I can imagine other scenarios that might leave the Finder in an unusual state — a kernel panic, for instance, or a loss of power to the Mac. Over years of usage, it’s easy to see something like this happening to many people.

Regardless, the practical upshot of this minor mystery is as follows:

Finally, why might you want to work in ~/Library? Lots of reasons, but in 2012, Ted Landau wrote an article for Mac Observer about the top six reasons to visit the Library folder. It’s old but remains essentially correct. Still, as Ted says, don’t mess around with files in ~/Library if you don’t know what you’re doing — you can cause real problems. Always make sure you have a backup first!

Comments About Colonel Mustard in the Library with the Shift Key