Opera is like the Volvo of Web browsers: they both hail from Scandinavia (but are now owned by Chinese companies), they’ve been around forever, they’ve pioneered many features we now take for granted, and despite all that, both are niche players in their respective markets. But recent events made me give Opera another look, and I like what I see. Maybe I should test drive a Volvo too?

One of the oldest Web browsers on the market, Opera launched in 1995, and was one of the first to support Cascading Style Sheets, tabs, speed dial (which displays your most-visited pages as thumbnails), pop-up blocking, browser sessions, and private data deletion.

Opera always marched to the beat of its own drummer, which often meant that the browser was somewhat funky, both in terms of its interface and how it rendered Web pages. But in 2013, Opera adopted the standard WebKit engine and later moved to Google’s Blink engine, which was forked from WebKit.

Today’s Opera thus resembles Google Chrome in its interface and how it renders Web pages. In my testing, Opera seems to use more system resources than Chrome but simultaneously manages to feel snappier. It also boasts features that other browsers lack. Here are three unusual ones that may interest you.

VPN — The first thing that caught my attention about Opera was its built-in VPN. While writing “Congressional Republicans Kill FCC ISP Privacy Rules” (3 April 2017), I mentioned Opera’s VPN as an easy way to hide your browsing history from your ISP. But I had to try it myself, and I found that it works pretty well.

Now, a disclaimer: Although it was born in Norway, Opera is now owned by a group of Chinese investors. For many people, Chinese ownership is an immediate deal killer. However, many popular VPNs are based in Hong Kong, which is also under Chinese jurisdiction. Ultimately, my calculation comes down to which of these is a more likely threat? Comcast building a profile of me that can be sold to the highest bidder, or a Chinese/Norwegian company doing it? With the VPN, I get the benefit of being hidden from the sites I visit. Overall, I decided that the Opera VPN is a net privacy win for me, with little risk or investment.

Turning on Opera’s VPN is easy. Open Opera > Preferences > Privacy & Security, and select Enable VPN. A blue VPN icon appears next to the address bar, letting you know it’s enabled. Clicking the icon reveals a popover that lets you turn the VPN on and off, see how much data you’ve used (which is free, at least for now), and change your virtual location, which you might need to do if a Web site doesn’t like the country you appear to be visiting from. 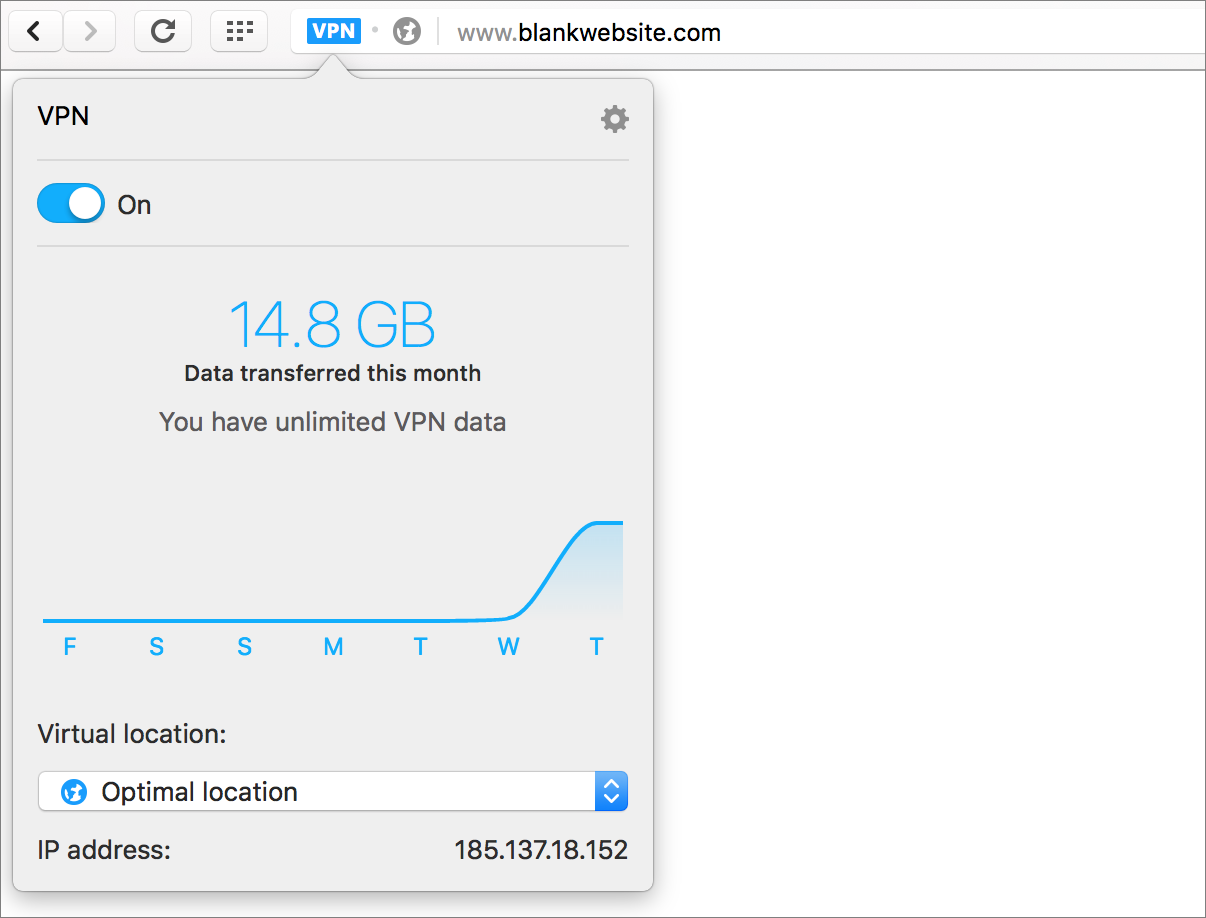 Browsing speed isn’t noticeably slower than when the VPN is off. However, the VPN occasionally gets disconnected, and I have to turn it off and back on again to get browsing to work.

Video Pop Out — macOS 10.12 Sierra brought Picture in Picture to Safari, but the results have been disappointing so far. Apart from Apple’s Web site, the only other site I know of that supports Safari PiP is YouTube, and even then you have to know the trick: Control-click the video twice to reveal the option.

Opera’s video pop out feature is easier to use and works on many more sites. Hover your pointer over a video, and a green arrow appears. Click the arrow and a separate window opens, playing the video. It works with both HTML5 and Flash videos, and on sites like YouTube, Facebook, Twitter, and Netflix. The only incompatible site I’ve found so far is Hulu. 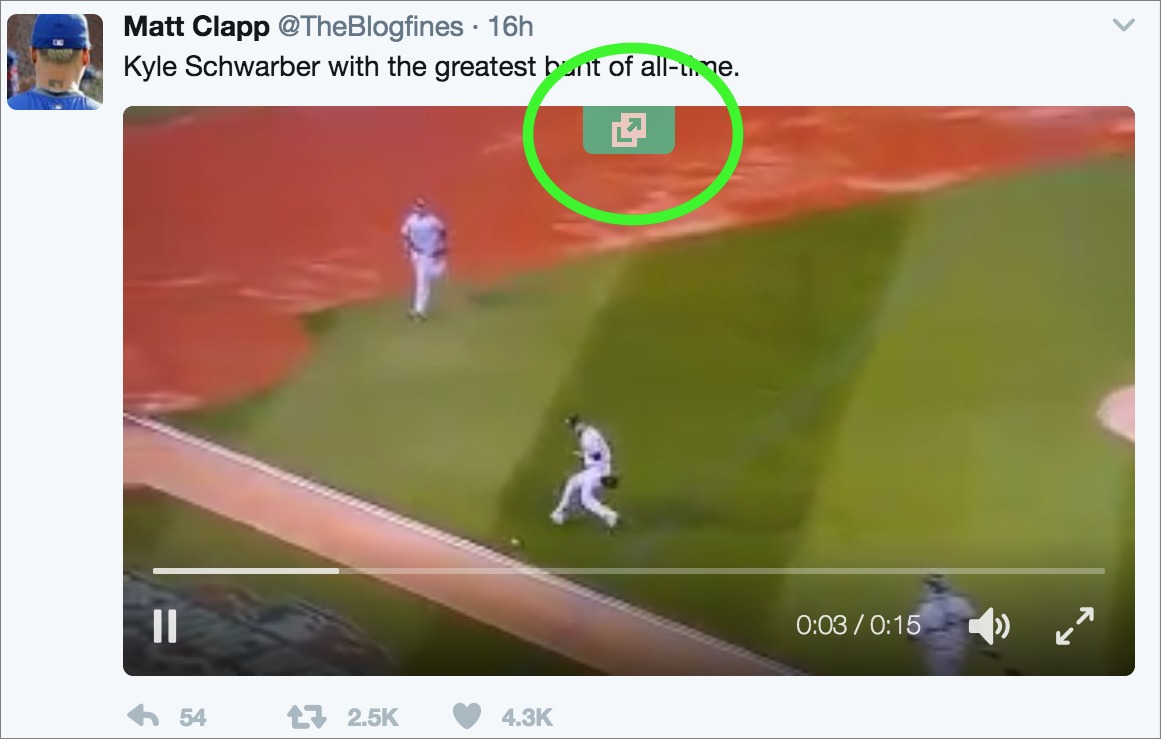 Speaking of Flash, Opera, like Chrome, includes its own built-in version of Flash, so you don’t have to install that nefarious plug-in to watch the occasional Flash video. It works with most sites, but I still have to switch to Chrome on occasion to watch Flash videos.

Tab Previews — If you’re anything like me, you tend to open so many tabs that you can no longer tell what is what. That’s why I love Opera’s tab preview feature, which you enable by going to Opera > Preferences > Browser, scrolling down to User Interface, and selecting Show Tab Previews.

With tab previews enabled, simply hover your mouse pointer over the tab to see a visual preview of it. It can be a little disorienting at first, but I’ve found it invaluable. 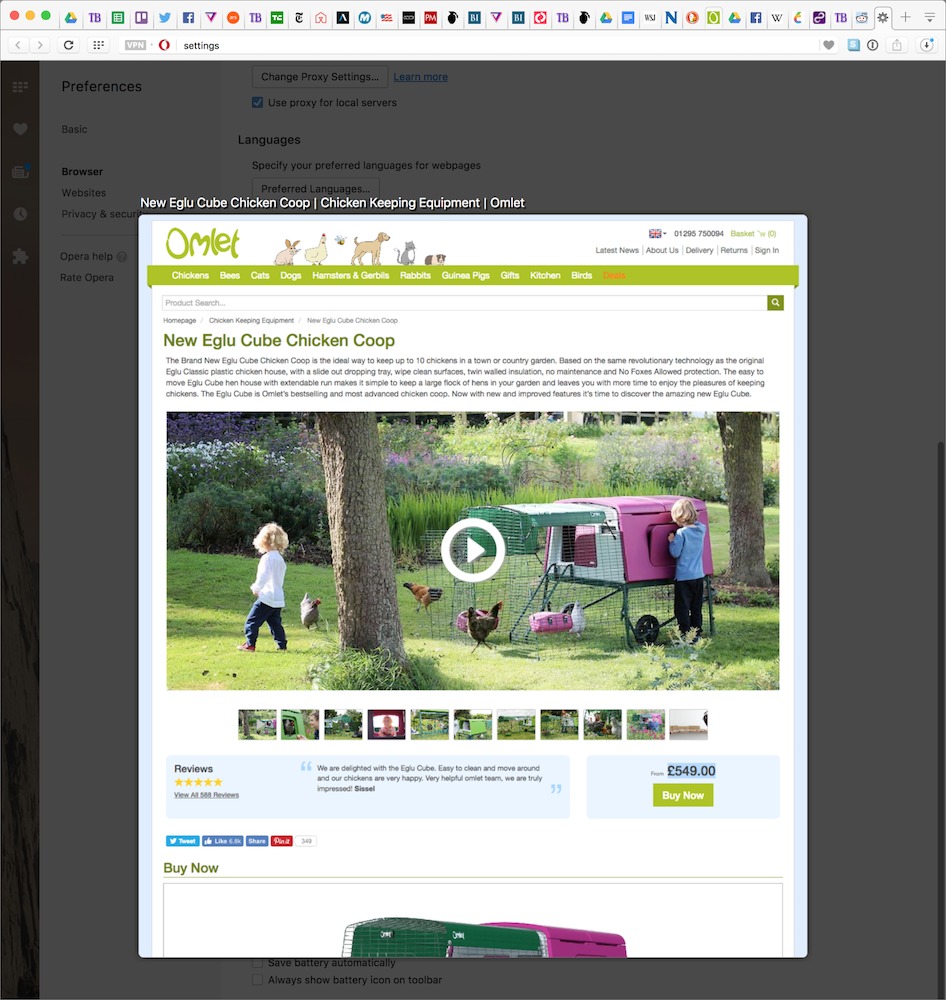 Other Stuff — Opera’s VPN, video pop out, and tab previews are the three top things I like about Opera, but other niceties abound.

Performance is hard to quantify, but Opera stays consistently snappy, both in page loading and overall performance, even with the VPN enabled. I never feel the need to quit and restart as I have with other browsers.

Another nice touch is Opera’s built-in ad blocker, which you can enable in Opera > Preferences > Privacy & Security. I can’t say how it compares to everything on the market, but it seems more effective than 1Blocker, which is what I use in Safari.

Speaking of browser extensions, many popular extensions are available for Opera, including the all-important 1Password and HTTPS Everywhere. Unfortunately, it doesn’t have every extension that is available in Chrome… unless you install the Download Chrome Extension extension, which lets you use most Google Chrome extensions. (Hat tip to Ryoichi Morita for telling me about Download Chrome Extension!) It works like a charm for one of our favorite Chrome extensions, Grammarly. 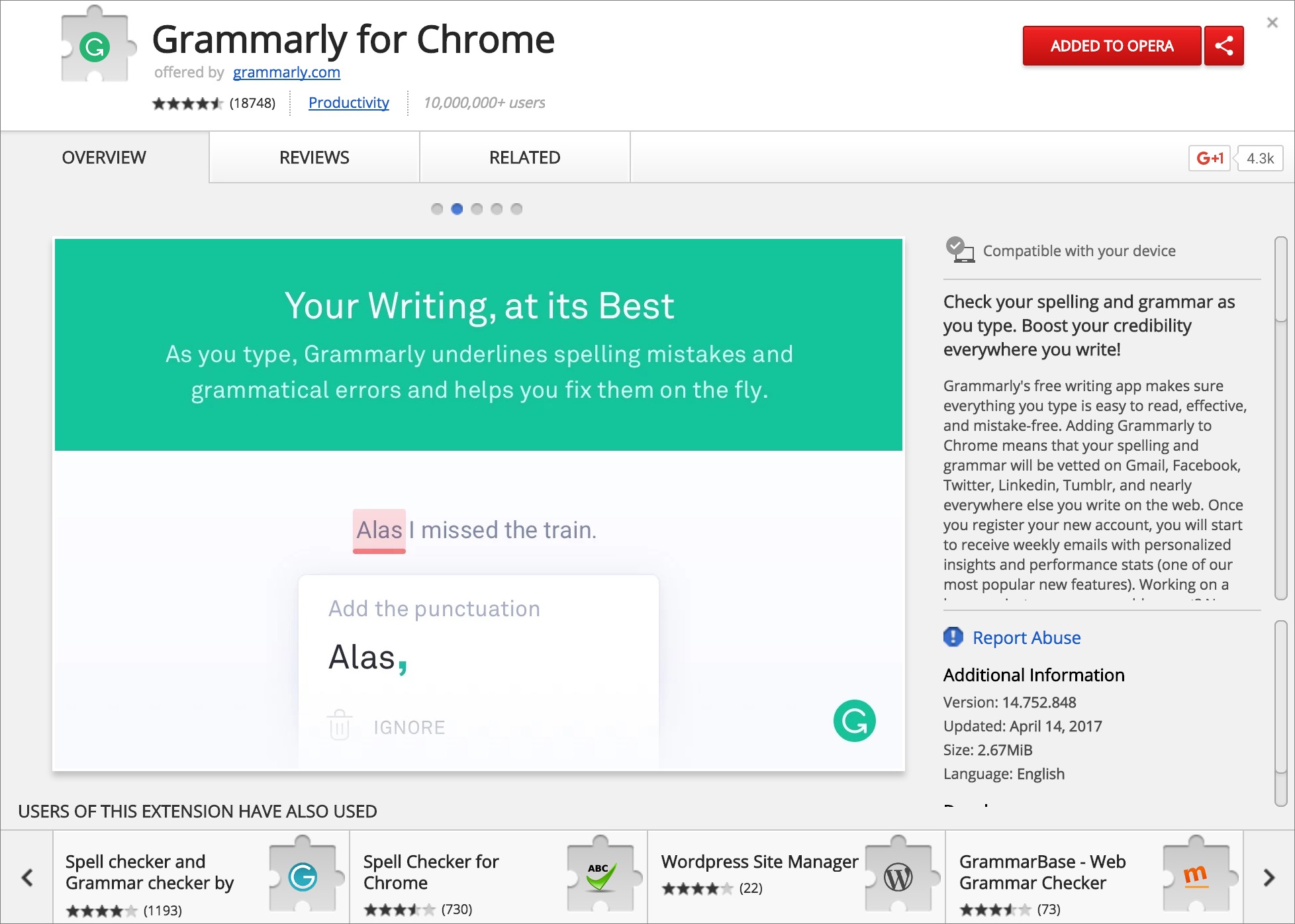 Apart from Safari, many browsers are power hogs. Opera offers a battery saver feature in Opera > Preferences > Basic. I can’t quantify the savings, but Opera claims that it will give you an extra hour of browsing over Chrome.

Opera is famous for its mouse gestures, which let you perform browser actions merely by moving the mouse pointer. I don’t care for them because I find them confusing, and many require clicking a right mouse button that I don’t have. Your mileage may vary.

Finally, another neat little feature is Opera’s built-in currency converter. Highlight a price in a foreign currency, and a popover appears showing you the amount in your native currency. You can change your home currency in Opera > Preferences > Browser > On Text Selection Convert Currency To. You can also use the popover to search for highlighted terms or even share them via the macOS share sheet.

I could go on, but in the end, Opera is still just a Web browser. However, after testing it for a few weeks, I’ve decided to keep it as my primary browser, at least until one of the others ups the ante. If you’re unhappy with your current browser, give Opera a spin and let us know what you think!

What’s your favorite Web browser? Let us know in our Twitter poll, which will be open until 3 May 2017. Unsurprisingly, Safari is currently winning by a large margin.

Comments About Three Reasons to Try the Opera Web Browser