The Centers clan is in the midst of a move. We outgrew the old prairie home — my current office often looked like an outtake from the show “Hoarders” — so we’re moving on to greener pastures. But the hustle, bustle, and boxes (so many boxes) make it difficult to review HomeKit accessories properly until we get resettled.

That’s why I’d like to talk about one of the simplest types of home automation accessory you can buy: the humble smart outlet. Smart outlets are an excellent way to get started with HomeKit because they’re cheap, simple, and easy to reposition. Just plug a smart outlet into an ordinary wall outlet, plug an appliance into the smart outlet, do a little software setup, and you’re done.

Before you invest in a smart outlet, be aware of their limitations. All they do is toggle power on and off to any connected appliances. They won’t dim your lights or adjust the output of your heater. They work best with devices that activate when plugged in, especially those with “hard” switches like electric heaters, fans, lamps, and window air conditioning units.

Which smart outlet should you buy? I’ll discuss two that I own: the Elgato Eve Energy and the iHome iSP5. The kind folks at Tin Drum PR provided me with the Eve Energy — it retails for about $50 — while I purchased the iHome iSP5 from Walmart for about $40. iHome also offers the fancier iSP8, which includes a physical remote control, for about $50.

The Eve Energy and the iHome iSP5 are similar devices, but if you see them side by side, you immediately notice the size difference. The face of the Eve Energy is square — about 2.5 inches (6.35 cm) wide and long — and 1.125 inches (2.86 cm) thick. The iSP5 is about 2.75 inches (6.98 cm) wide, 1.375 inches (3.49 cm) tall, and 1.4375 inches (3.65 cm) thick. In other words, the iHome is about half as tall but a little thicker than the Eve Energy. Depending on your particular situation, one may fit better than the other. Even though the Eve Energy is larger overall, its thinner profile makes a better option in tight spaces such as behind bookcases.

Both smart outlets feature a manual power button. The iSP5’s button, which you press to turn the outlet on and off, is tucked away in the upper-right corner. The Eve Energy’s button is right on the front, but you must hold the button down for a few seconds to turn it on and off.

As far as setup and operation goes, both set up quickly in Apple’s Home app, which I covered in “A Prairie HomeKit Companion: Setting Up Accessories and Rooms” (16 January 2017). Both smart outlets also offer their own apps, but I usually don’t like to fool with them. They seldom provide any important advantage over Apple’s Home app and generally make things more complicated. The entire point of HomeKit is that you have a central interface for all of your home automation items, regardless of vendor. As far as using the smart outlets in Home, it’s a simple as tapping the icon to turn them on or off. Of course, you can also use them in Scenes and Automations. 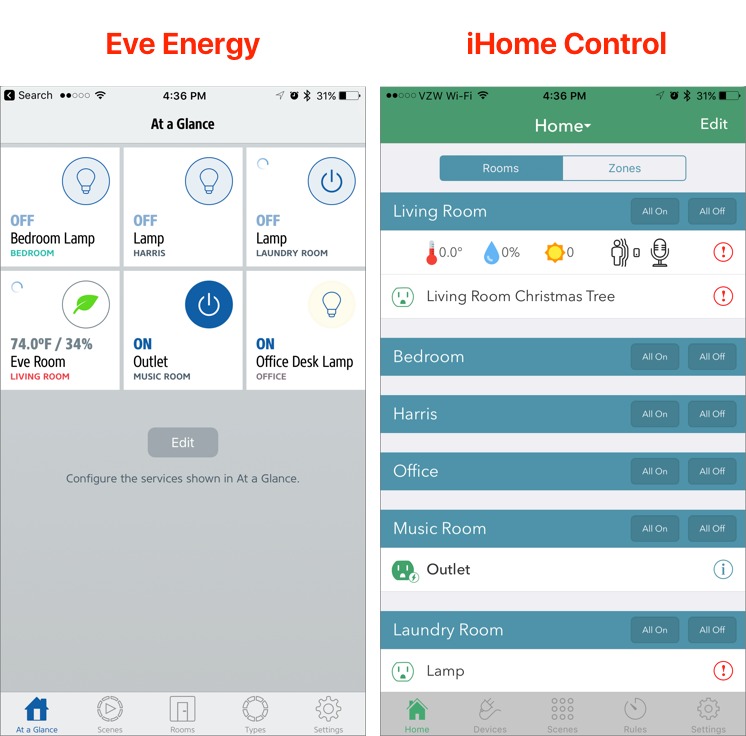 However, Apple’s Home app lacks one nice feature available from both Elgato’s Eve Energy app and the iHome Control app: power consumption monitoring. iHome’s app requires an online account, but Elgato’s doesn’t, so if you’re interested in that feature, I recommend the Eve Energy. In fact, iHome Control won’t even record those statistics until you
create an account, but Eve Energy will quietly gather them in the background with no intervention necessary. I also find Eve Energy much better than iHome Control overall because it’s a full-service HomeKit controller. In contrast, iHome Control seems to work with only a few of my HomeKit devices.

The main functional difference between these two smart outlets is that the iHome iSP5 relies on Wi-Fi, whereas the Eve Energy communicates via Bluetooth. The iSP5 is the winner here because Wi-Fi has much better range and responsiveness than Bluetooth. Elgato announced the Eve Extend Bluetooth range extender at CES 2017, but it has yet to materialize.

Overall, I recommend the slightly cheaper iHome iSP5 over the Elgato Eve Energy unless Bluetooth is preferable to Wi-Fi in your environment, you’re particularly interested in power consumption monitoring, or the iSP5 is too thick for a tight space.

If you’re curious about HomeKit automation, you can’t go wrong with a smart outlet like the iHome iSP5. It’s cheap, easy to set up, simple to uninstall, and a breeze to operate. Not only that, but these outlets are versatile, working with many different plug-in appliances. They may not be as much fun as the Philips Hue lights, but they’re easier on the bank account (see “Getting Started with the Philips Hue Smart Light Bulbs,” 1 August 2016).

That’s all from the Prairie HomeKit Companion for now. I’ll check in again soon once I’ve had a chance to experiment with an entirely new house layout.