Tech titans have clashed for decades in the education market.

Early on, Apple had an enviable position in K-12 and higher education, first with the Apple II and later the Mac, but later on lost ground to inexpensive Windows-based PCs. Then came the iPad and an Apple resurgence in the classroom, only to have that challenged by Google and its Web-centric Chromebooks. Meanwhile, Microsoft has been planning its return to the education market.

The Redmond tech giant showed its hand on 2 May 2017 in a press event that glossed over the consumer and business realms for once and focused squarely on education. The keynote, brief as these things go, revealed a new Surface laptop intended primarily for use in classrooms, a new flavor of the Windows operating system – again, largely for student use – and a bunch of education-friendly software tools.

Let’s break it all down, so those who use or recommend Apple’s education solutions know what’s happening in this space.

Surface Laptop — In education, both the iPad and Chromebooks have their problems. As a tablet, the iPad is a bit awkward for typing because it lacks an integrated physical keyboard. It’s pricey, too. Chromebooks have keyboards and tend to be less expensive but, unlike muscular and nicely constructed iPads, they have a reputation for being underpowered and chintzy. 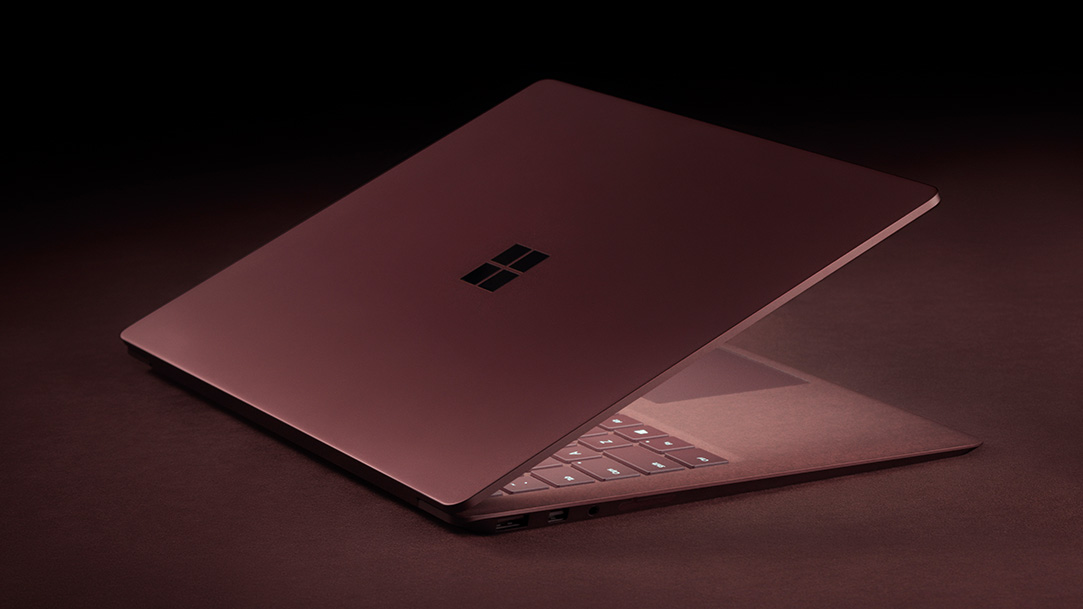 Microsoft aims to lick both problems with its new Surface Laptop, a well-built and powerful PC in a traditional clamshell configuration.

Starting at $999, the 2.76 pound (1.25 kg) Surface Laptop uses beefy 7th-generation Intel Core processors, boasts an advertised 14.5 hours of battery life, and features a 13.5-inch, 3.4-million-pixel touch display with Gorilla Glass 3 for ruggedness (a must in the classroom). Microsoft claims this “PixelSense” display is the thinnest LCD touch screen on any notebook and brags that the laptop has 4 more hours of battery life than a 13-inch MacBook Pro under certain conditions.

Aesthetics include anodized metal outside — in an Apple-like move, it comes in a choice of four shades: Burgundy, Cobalt Blue, Graphite Gold, and Platinum. Inside, the Surface Laptop uses warmer materials, including soft-to-the-touch Alcantara fabric surrounding the keyboard and trackpad — the same durable, stain-resistant polyester/polyurethane fabric found on the outside of Microsoft’s Surface Pro tablet keyboard covers. 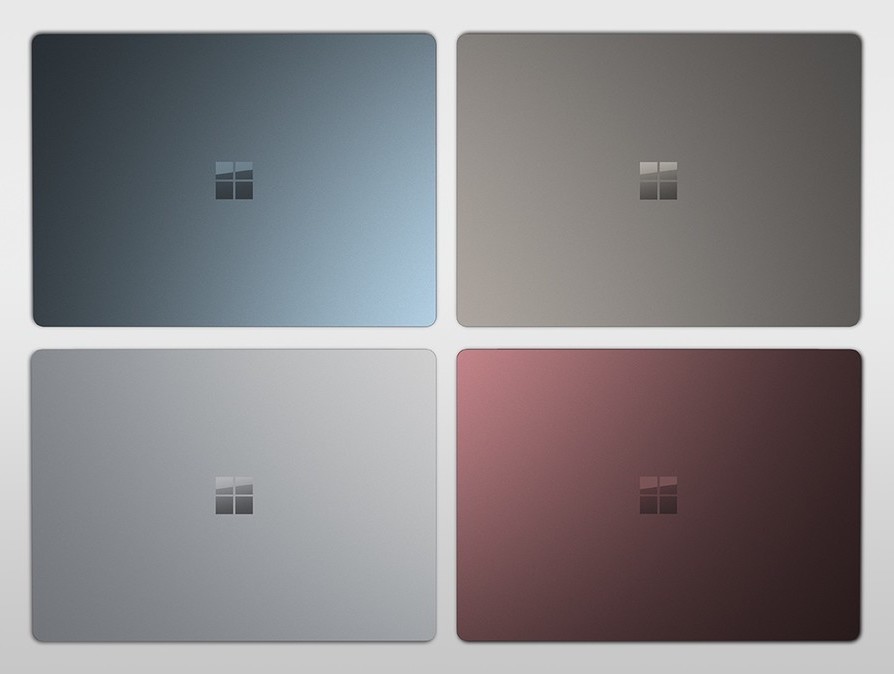 The Surface Laptop, which is 0.57 inches (14.47 mm) at its thickest point, is a notable departure from previous Surface gear that boasts less conventional designs. It’s neither a chunky Surface Book with a weird hinge and removable screen nor a Surface Pro tablet with detachable keyboard and metal flip-out stand.

Windows 10 S — Apple’s iOS and Google’s Chrome OS have a reputation for being simple to use and manage, though in radically different ways.

Now Microsoft is offering a third choice, a simplified version of Windows it calls Windows 10 S and intends largely for classroom use. To that end, it’s somewhat limited: it only runs apps from Microsoft’s app store, leaving out many traditional desktop apps. The reasoning is similar to Apple’s with the Mac App Store: apps offered for download have been vetted for security and offer uniformity in how they are used, both of which are music to the ears of classroom tech administrators. But Microsoft has tried app-store-only Windows versions before without much success.

Microsoft announced that full-featured versions of its Office apps would be made available via the app store — until now, its app store offered only limited versions of the Office apps. Microsoft is also adapting its Edge Web browser with students in mind, adding a space for organizing tabs into groups, which could be useful for thematic organization when writing school papers and the like.

Tech administrators also get a few goodies, including the option to upgrade any Windows 10 S PC to Windows 10 Pro (after which it cannot be reverted to Windows 10 S) and an option to set up classroom laptops automatically just by inserting a USB flash drive with Windows 10 S configuration specs.

Microsoft is not keeping Windows 10 S to itself. In addition to the Surface Laptop, notebooks from the likes of Acer, Asus, Dell, Fujitsu, HP, Samsung, and Toshiba will run Windows 10 S. Some of these machines will reportedly cost as little as $189, putting them squarely in the same price range as cheap Chromebooks.

Teams, Minecraft, and More — Although Microsoft has been expanding into hardware, it’s a software company at its core, so it’s not surprising that Monday’s keynote focused on applications suitable for education.

One of these is Microsoft Teams, group chat software initially released for the business market. In now offering it to the education market, the company said it will “make Teams the digital hub for the classroom where teachers and students come to collaborate and learn.”

Focusing Teams on education is an important move for Microsoft to make because of the robust collaboration features built into Google’s productivity apps, which are widely used in schools as well as businesses. In addition, platform-agnostic products such as Slack are making group chat an essential part of modern collaboration in both business and education. 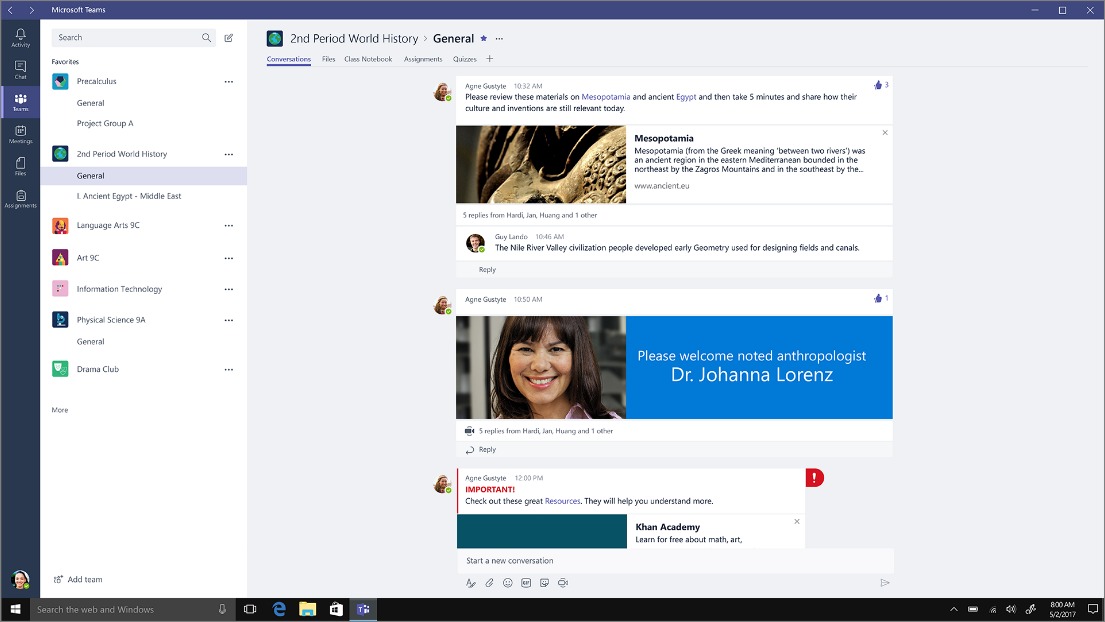 Microsoft also made an announcement related to Minecraft, the popular world-building software it bought in 2014. It is now building in coding features aimed at students, which is not unlike how Apple positions its Swift Playgrounds coding app (see “Playing Around with Swift on the iPad,” 13 June 2016). 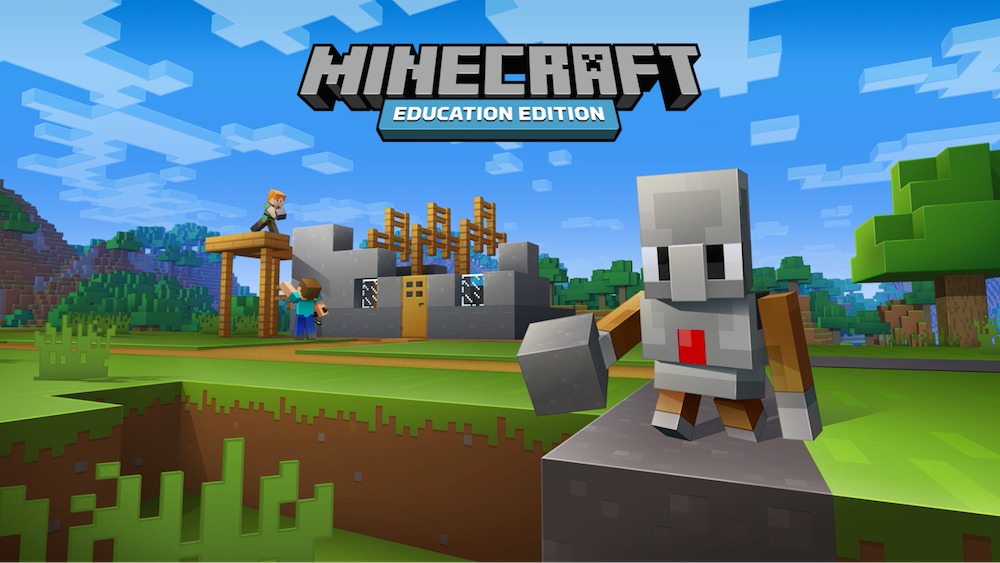 These changes will integrate Minecraft with student-coding platforms like Tynker, ScratchX, and Microsoft’s MakeCode, along with grown-up coding technology JavaScript. In this manner, students can write code that makes things happen in Minecraft environments, like building structures. Again, this isn’t far off from what Apple does in Swift Playgrounds, although Minecraft is already hugely popular
among the school-age set.

Microsoft also announced a renewed push into “mixed reality” with students in mind. Mixed reality refers to a combination of virtual reality (where you strap on goggles to navigate simulated worlds) and augmented reality (which layers digital constructs onto the real world; think Pokémon Go). Gear like Microsoft’s HoloLens headset is intended to facilitate such blended experiences, with Microsoft claiming more mixed-reality hardware is on the way (see “Windows Goes Universal… and Holographic,” 23 January 2015, and “On the iPhone, Virtual Reality Is Unofficially Real,” 17 June 2016).

In addition, Microsoft announced a deal with education-content giant Pearson, which has pledged to offer mixed-reality content in a variety of topic areas, including health, commerce, history, and STEM (short for science, technology, engineering, and mathematics).

The Third Option — Despite the continued prevalence of Windows PCs in schools, Microsoft has clearly been feeling left behind by Apple and Google in the education market.

To respond, Microsoft has adapted its core products into what it believes is a compelling package for educators and their administration overlords: a powerful, durable laptop, along with a familiar operating system modified for increased ease of use and security. Also, Minecraft!

Naysayers will note that the new Surface Laptop is not exactly education-priced: a starting price of $999 is steep compared to Chromebooks that can be had for as little as $200. Also, Microsoft’s education-focused message gets muddled when it makes comparisons to the MacBook Pro, which may be relevant in higher education, but less so in the K-12 classroom.

Critics will also wonder why Microsoft is releasing yet another limited version of Windows. Didn’t it learn anything from the likes of Windows RT and Windows Starter Edition, two previous attempts to push simplified versions of its iconic operating system?

But educators who are weary of rickety Chromebooks and keyboard-less iPads may look seriously at Microsoft’s offerings. And if that fosters competition, schools win in the end.