Well, this is exciting — the Apple world has a new conference dedicated to automation on 9 August 2017 in Santa Clara, California. CMD-D offers a packed 13-hour day of sessions on many aspects of scripting and automation. For those new to automation, there’s an optional Scripting Boot Camp on the day before, 8 August 2017 (more details on that will be forthcoming). 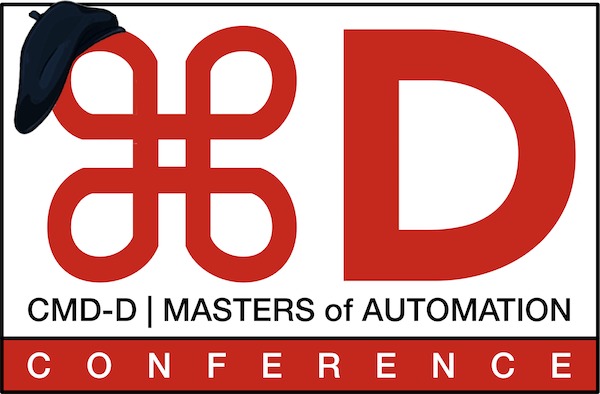 The speakers lined up so far are top-notch, which I would say even if they weren’t all friends. Sal knows more about Apple automation than anyone, and he’ll be talking about power features of AppleScript, AppleScriptObj-C, and JavaScript for Automation that even most experts don’t know. John Welch has been in the admin trenches for longer than I can imagine and will be talking about when automation is a must and when not to bother. Jon Pugh was one of the original members of the AppleScript team and will be sharing stories about how AppleScript was created. Andy Ihnatko… well, everyone knows Andy, and he is slated to discuss automation as a martial art practiced against “tedious,
repetitive work.” And finally, Jason Snell, who has become one of the premiere podcasters in the Apple world after leaving Macworld, will be hosting a live Six Colors podcast session with the speakers on the present and future of automation.

Other sessions include a deep dive into Automator, automation’s role in managing hundreds or thousands of iOS devices, how to use the Apple-acquired Workflow to automate tasks in iOS, an introduction to the Omni Group’s cross-platform scripting solution for their apps, and even an open-mic automation slam for attendees to share their most impressive solutions while competing for an award. I hope it’s a big shiny gear.

CMD-D will take place in the Santa Clara Convention Center, which is near the San Jose International Airport and not far from the airports in both San Francisco and Oakland. You can register independently for the CMD-D conference and the Scripting Boot Camp for $295, or sign up for both for $590. That’s early bird pricing, which is good through the middle of June; after that, each day’s fee goes up to $395 and the two-day pass increases to $790. Lunch and afternoon snacks are included.