With the announcement of the HomePod during the WWDC keynote today, Apple finally put the brakes on the endless speculation about whether the company would release a smart speaker to compete with Amazon’s popular Echo and its Google Home competitor. 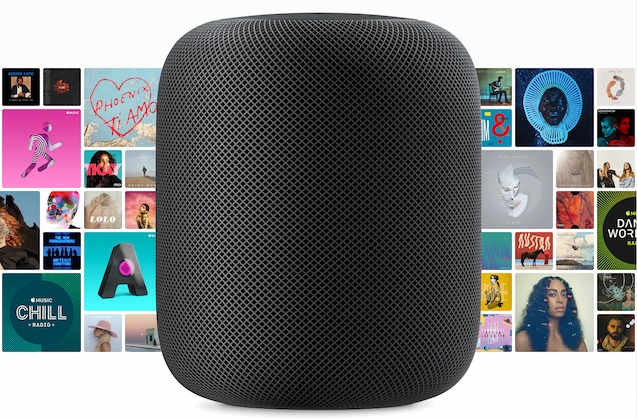 However, Apple didn’t just wade into the fray with a me-too product. In fact, during the announcement, the whole “smart” part of the “smart speaker” didn’t warrant mention until near the end. Instead, Apple focused its attention on the “speaker” features of the HomePod.

Apple’s Senior Vice President of Worldwide Marketing Phil Schiller said that Apple has been working for years to reinvent the way we enjoy music in the home, and to that end, the company first designed the HomePod to be a great speaker.

It’s just under 7 inches (17 cm) tall and is covered in a 3-D mesh fabric. It features an array of seven beam-forming tweeters, each with its own driver, and precision acoustic horns that can direct sound in any direction. Bass comes from a 4-inch Apple-designed woofer that faces upward to move a lot of air, and software provides automatic bass equalization to avoid distortion as the volume increases.

All this is powered by Apple’s A8 chip, which the company first used in the iPhone 6. It provides real-time acoustic modeling, audio beam-forming, and multi-channel echo cancellation.

Since speakers live in different rooms with radically different acoustic properties, the HomePod has spatial awareness, in that it can detect its surroundings and adjust the music to match. It even knows if there’s a second HomePod in the room, and if so, it changes how it emits sound to provide the best possible listening experience.

Apple is also using the HomePod’s processing capabilities and its array of six microphones to let you control it via Siri. Control what? Music, of course, and Apple assumes that you’ll have an Apple Music subscription. To that end, Apple has expanded Siri’s vocabulary when it comes to music. Plus, the HomePod will connect directly to Apple Music, so you won’t have to play music through another device, although we expect that will be possible as well.

What about all the other stuff that people have become accustomed to asking of the Echo and Google Home smart speakers? Apple got to this at the very end, almost as an afterthought. You’ll be able to ask Siri for news, unit conversion, stock info, weather forecasts, traffic reports, sports scores, and more. You’ll also be able to send messages, make reminders, set alarms and timers, and control HomeKit devices.

Apple emphasized the privacy aspects of the HomePod. Until you say “Hey, Siri,” all recognition happens only locally. Only after you utter that trigger phrase is any data sent to Apple, where it’s associated with an anonymous Siri ID. All communications are end-to-end encrypted.

Why didn’t Apple plug the virtual assistant features of the HomePod more? We have a few theories:

Regardless of why Apple chose to focus more on the audio quality of the HomePod than its Siri-driven smarts, we won’t be able to evaluate how well it does at either until it ships, which Apple promised for December 2017 in the United States, UK, and Australia. With other companies, that would be too late for the holiday shopping season, but since Apple sells so much directly, early to mid December should still work. Other countries will have to wait a little longer.