If you’re Apple, and you’re looking for a name for your new version of macOS, which is aimed at being a refinement to the previous version, what do you do? Name it High Sierra and make stoner jokes about how it’s fully baked. 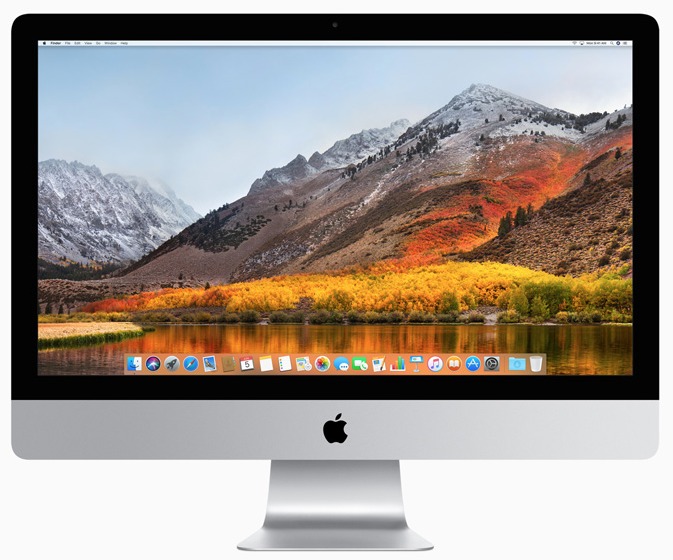 For film buffs, like our own Michael Cohen, Apple could instead have gone with a quote from the 1941 flick “High Sierra,” in which a character named Big Mac says, “Times have sure changed.”

The rest of us might identify with Humphrey Bogart’s character, Roy Earle, who replies, saying “Yeah, ain’t they? You know, Mac, sometimes I feel like I don’t know what it’s all about anymore.”

Under the hood, macOS 10.13 High Sierra will usher in the new APFS file system, H.265 HEVC video, and Metal 2 graphics. These changes will upgrade the Mac to a modern file system, bring a new industry standard for video compression to the Mac, and provide significantly enhanced graphics processing. They show that Apple is serious about the Mac’s future and about making necessary upgrades for Mac users in graphics-intensive creative fields like animation and virtual reality. Apple also announced a few welcome tweaks to its core apps.

Apple developers can access the High Sierra developer preview now, and a public beta should be available later in June. Apple expects to release High Sierra to the general public this fall (expect September or October). The upgrade will be free and run on all systems that support macOS 10.12 Sierra.

It’s All About Speed — The new 64-bit file system, called APFS, stands for Apple File System, and it’s not just for the Mac — it’s already in iOS 10.3 and will become part of tvOS and watchOS. Because APFS is decades newer than the HFS+ file system that the Mac uses currently, it was designed with modern-day concerns in mind, such as how to best work with solid-state drives.

APFS won’t make the Finder look different, but it should provide better performance: a task like displaying the size of a folder or duplicating a large file should go far more quickly. You can also look forward to features such as native encryption, faster backups, and better behavior in the case of power outages or system freezes (see “What Apple’s Forthcoming APFS File System Means to You,” 24 June 2016).

The new HEVC (High-Efficiency Video Coding, also known as H.265) provides 40 percent better video compression for 4K video than the previous H.264 standard, as well as hardware acceleration when used on certain newer Macs and with Apple’s Pro tools. In essence, in High Sierra, video should take up less space and stream better.

Metal 2 replaces the previous Metal API and is a big deal for developers — and by extension for anyone who wants the Mac to be taken seriously as a high-end creative platform. Apple’s description of Metal 2 lists the goodies expected in Metal 2, including GPU-driven pipelines, enhanced machine learning, and support for virtual reality rendering on external GPUs. Apple also announced an External Graphics Developer Kit, but details are still fuzzy. We’re still bummed that Apple passed on the opportunity to call it Heavy Metal.

App Enhancements — Apps that will see improvements in High Sierra include Safari, Mail, and Photos.

The Safari Web browser will, to be blunt, show Web pages that look and sound less trashy. Safari’s Reader view is enabled automatically for every Web article that supports it, removing ads, navigation, and distractions. Autoplay Blocking will stop media playback from occurring when you open a page — Macworld, we’re looking at you! Safari’s new Intelligent Tracking Prevention will remove tracking data that allows third parties to access your browsing history. In addition to enhancing your privacy, this feature may cause you to see fewer ads based on products you’ve researched or purchased in the past.

You’ll be able to customize all these features on a per-site basis, and the same applies to page zoom, location services, notifications, and content blockers.

Search in the Mail app will be faster and feature a Top Hits area in the results that will attempt to display the “most relevant” results. This feature is designed to learn from your actions, so the more you use it, the better the results should get. Mail will also have a new full-screen split view that puts the compose window next to your messages and better message compression, allowing it to consume less disk space.

Photos receives important tweaks that should interest many types of users. The interface will include a persistent sidebar and a redesigned Edit view. Facial recognition training you perform on one device will now appear on all your devices, the Memories feature has new categories, and new editing tools will help with fine-tuning and color saturation.

In the fun department, you’ll be able to edit Live Photos like the mini-movies that they are, with looping, reversing, trimming, and picking a key frame. You’ll also be able to turn a Live Photo into a long exposure to blur movement.

Photos will also finally bring back integration with external editors such as Photoshop and Pixelmator that was last seen in iPhoto. It will support third-party extensions so you can export projects to non-Apple printing services, such as Animoto and Shutterfly.

Other changes that Apple announced include more natural voices for Siri, simple tables in Notes, flight information in Spotlight, Siri music recommendations in Apple Music, and the capability to share a link to a file stored in iCloud Drive with anyone. The last feature noted on Apple’s Web page about High Sierra mentions iCloud storage plans for a family; presumably more details will be forthcoming.

Tripping to High Sierra — Perhaps we at TidBITS can be accused of inhaling, but reactions to High Sierra were generally positive. We’re always in favor of Apple refining existing features that seem, well, half-baked.

In the end, High Sierra adds timely improvements that will make every day use of apps like Safari and Photos more enjoyable while simultaneously adding foundational enhancements to enable previously unimaginable capabilities on the upcoming iMac Pro and promised Mac Pros. Apple even demoed some of this during the keynote by showing off a real-time virtual reality creation environment that was used to create a Star Wars experience. It may or may not have been the sort of thing anyone could do, but it was impressive.