Thinking about buying one of Apple’s just-updated iMacs? You’ll want to pay close attention while configuring them because you could end up with a worse configuration for the same price depending on how you start, or you might pay more for the same configuration. Alert reader Yasuhiro Sugawara of Sugarwater Brothers deserves the credit for identifying these quirks in Apple’s online store.

21.5-inch iMac’s Radeon Pro 555 versus 560 — First, imagine that you want to buy a 21.5-inch iMac with the fastest processor and a 1 TB Fusion Drive. Apple’s online store provides three configurations, the lowest of which we’ll ignore because it lacks the 4K Retina display and can’t be configured with a faster processor.

If you start with a middle-level 21.5-inch iMac with 4K Retina display, choose the faster 3.6 GHz quad-core Intel Core i7 processor, and select a 1 TB Fusion Drive in place of the 1 TB hard drive, you end up with a price of $1699. If you instead start with the top-level 21.5-inch iMac, you can create the same configuration for the same price merely by selecting the faster processor, since it already comes with a 1 TB Fusion Drive. 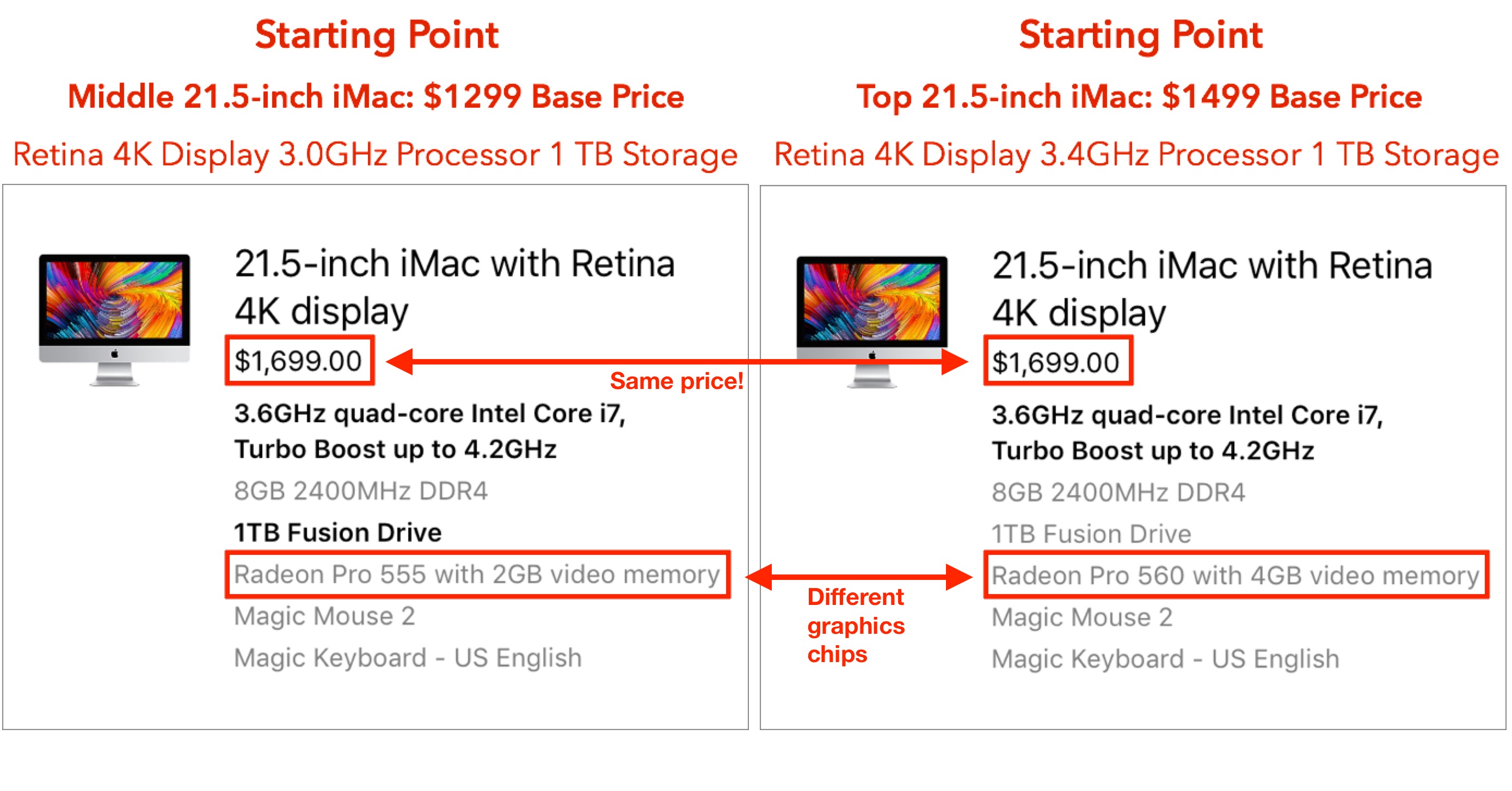 How much of a difference does the higher-numbered Radeon Pro graphics chip with twice as much video memory make? It’s impossible to say without formal benchmarking. AMD says that the Radeon Pro 555 has 12 compute units and can hit 1.3 teraflops, whereas the 560 has 16 compute units and can reach up to 1.9 teraflops. On the Tech Report Web
site, there’s a discussion of these graphics chips that suggests there might be a slight performance improvement by getting the 560 over the 555.

Whether or not you’ll notice the difference between the 555 and the 560, I can’t see any reason you wouldn’t want the faster 560 with more video memory for no extra money. It will be at least theoretically better and may increase the resale value of the iMac. Regardless, if you want a 21.5-inch iMac with the fastest processor and at least a 1 TB Fusion Drive, start with the top model, not the middle model.

The price equivalency stays in place as you add RAM or storage, though the top model can also take up to 32 GB of RAM, whereas the middle model tops out at 16 GB. As with the previous 21.5-inch iMac models, you cannot upgrade the RAM yourself, as you can with the 27-inch iMac, so make sure to order with the right amount to start.

Yasuhiro Sugawara’s discovery piqued my curiosity, so I investigated other Macs. With the 15-inch MacBook Pro, I couldn’t create a similar situation, because the middle configuration offers a $100 option of stepping up from the Radeon Pro 555 with 2 GB of video memory to the top model’s Radeon Pro 560 with 4 GB of video memory. Clearly, Apple considers that jump to be worth $100, at least when it comes to the MacBook Pro.

The Radeon Pro 575 has 32 compute units versus 36 compute units in the 580, and the peak performance is 4.5 teraflops for the 575 and 5.5 teraflops for the 580. So once again, if you want a 27-inch iMac with 5K Retina display and the fastest processor, start with the top model. The pricing equivalency remains in place as you add RAM here too, and sticks whether you want a 2 TB or 3 TB Fusion Drive.

(Speaking of adding RAM, you can upgrade the RAM yourself in all three 27-inch iMac models. The Mac Observer notes that even the low-end model can take up to 64 GB of RAM, contrary to Apple’s Tech Specs page, although you’ll need to buy it from an independent supplier.)

27-inch iMac’s SSD Pricing — There is one area in which this unusual pricing equivalency does not remain in place for the 27-inch iMac, and that’s if you want to swap the Fusion Drive for an SSD. 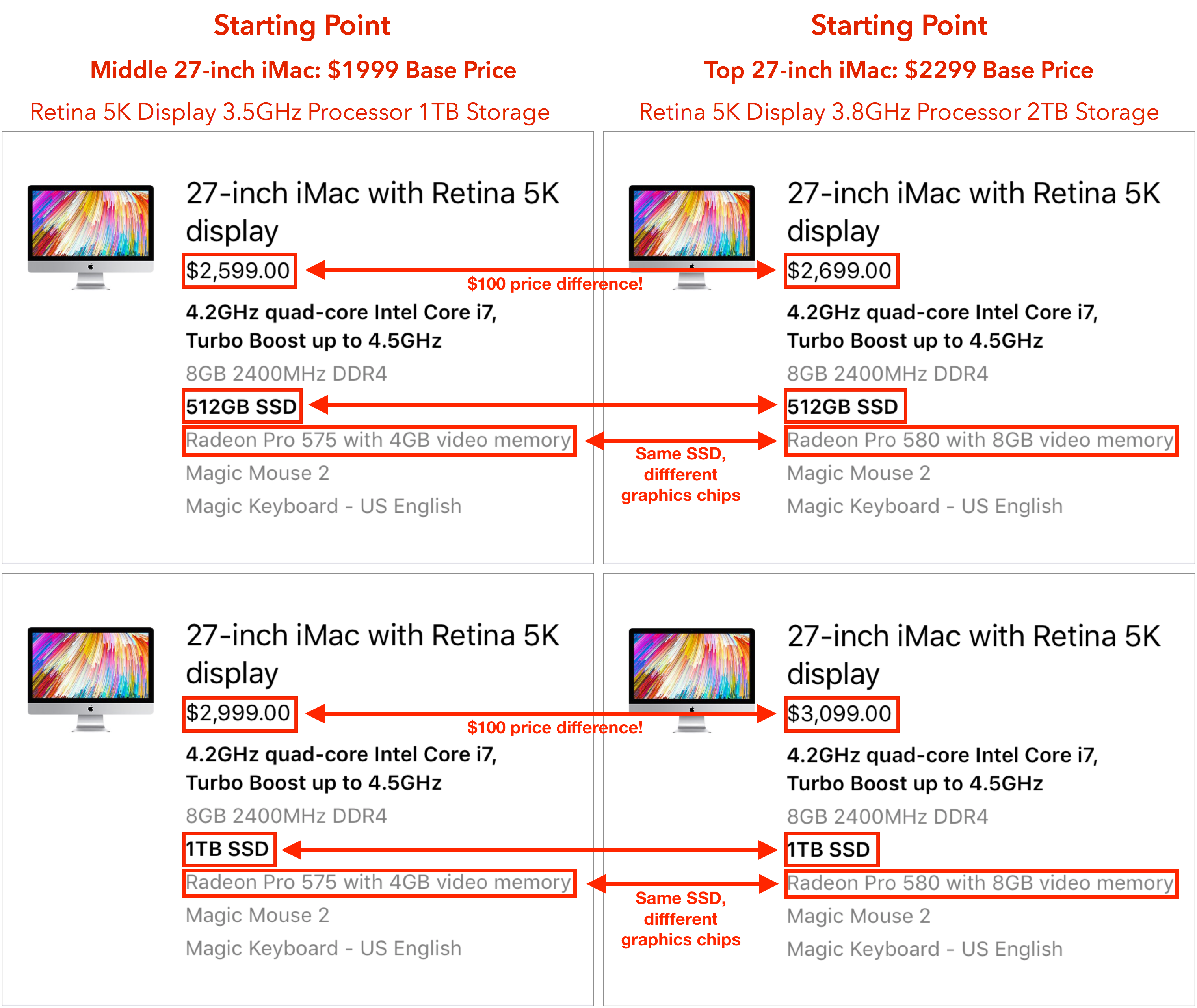 I see three possible explanations for this discrepancy at the moment. In order:

I have contacted Apple about this situation, but haven’t heard back yet.

In the meantime, the moral of the story is to pay careful attention when you start configuring an iMac to make sure you’re getting the best possible set of options for your money.