Fans of the TV show “Seinfeld” might remember George Costanza’s overstuffed wallet, which he described as “an organizer, a secretary, and a friend,” complete with notes, receipts, hard candy, Sweet’N Low packets, and possibly even cash. Back in the 1990s, unless you carried a purse, or as Jerry Seinfeld called it, a “European carryall,” your wallet was often the repository for all that stuff you might need just in case, like George’s Irish money.

Thanks to the iPhone, you no longer need a wallet so large that you have to stuff napkins in the opposite pocket to level out your posterior. Your iPhone can store notes, photos, and receipts. And with Apple Pay, Apple has even bigger ambitions.

When Apple VP Jennifer Bailey, who leads Apple Pay, said at a Recode Code Commerce Series event in 2016, “Everything in your wallet, we’re thinking about,” she probably didn’t have Sweet’N Low packets in mind. But while I’m not using my wallet to squirrel away artificial sweeteners, I am looking forward to when I don’t have to carry around a wallet full of random cards that I might need sometime.

But how close are we, really, to that day?

Even before the debut of Apple’s Wallet app (when it appeared in iOS 6 as Passbook; see “Passbook’s Best Is (Probably) Yet to Come,” 20 September 2012), I had stopped trying to carry everything in my wallet. Begone, hotel membership cards. Away with ye, frequent flyer cards.

Back then, I replaced many such cards with a single, laminated card that held numbers for my hotel and airline accounts. That was helpful, but plenty remained.

What remains in my wallet now that I’m carrying an iPhone everywhere I go? My laminated card is gone, having been replaced by a password manager and iPhone apps for hotels and airlines (see “Comparing Five iOS Travel Management Apps,” 11 April 2017).

Still, there’s a lot left, and the collection probably looks a lot like yours. Let’s take a look at each category and see what the likelihood is that you’ll eventually be able to offload it to an iPhone app.

Cash — While it seems that Apple is printing money these days, that’s only in a metaphoric sense. But if you wanted to walk around with almost no cash and pay for nearly everything with some virtual payment scheme, you might be able to get away with it.

Apps such as PayPal, Circle, Square Cash, and Venmo allow people to pay for things or send cash to each other — Glenn Fleishman wrote about that last year in “Circle, Square, and Venmo: Payment Apps Let You Pay via iMessage” (3 October 2016).

The latest news, announced at WWDC, is that Apple itself will be getting into the payment game, adding person-to-person payments as a function of Apple Pay. The process will be initiated through an iMessage app and will use a virtual Apple Pay cash card when iOS 11 ships in a few months (see “iOS 11 Gets Smarter in Small Ways,” 5 June 2017). This change will be big, maybe bigger than George’s wallet. Never underestimate the stickiness of an app that’s native to the device.

Credit Cards — If your credit card issuer is on board and you shop mostly at large chains, Apple Pay has the potential to let you leave credit cards at home. Plus, some stores let you pay via their own apps (like Walmart Pay — see “Walmart Pay Is Better Than You Might Expect,” 18 July 2016). 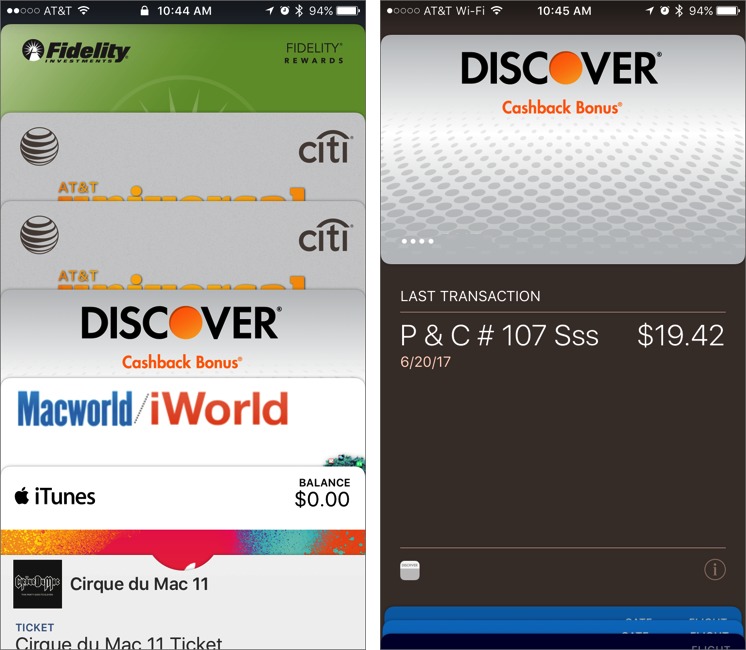 As a bonus, Apple Pay and similar apps can help you avoid paper receipts that fill your wallet, either storing them in the app or sending them to you via email.

Unfortunately, too many retailers still lack payment terminals that accept Apple Pay, so credit cards will have to stay in the wallet for now. But I have noticed that the silver paint on their raised numbers isn’t rubbing off quite so fast since credit cards come out of my wallet much less often.

As an aside, the rise of digital wallet technologies like Apple Pay also effectively killed off the nascent market for a single multi-account card — such as those offered by moribund or defunct companies like Coin, Plastc, and Swyp — that could be used in place of credit cards, debit cards, gift cards, and other loyalty cards.

Debit/ATM Cards — Apple Pay supports many debit and ATM cards just like credit cards. Using Apple Pay to pay with a debit card works mostly like paying via Apple Pay with a credit card, though you have to enter a PIN at the sales terminal.

Getting cash out of an ATM is a slightly different story. Many banks have updated their ATMs to include contactless card readers that will accept an ATM or debit card that has been added to the Wallet app.

The side benefit of using Apple Pay at an ATM is greater security because card skimmers — which thieves commonly use to capture ATM card data — can’t steal data from contactless card readers.

To use your debit/ATM card with an ATM, first double-press the Home button to invoke Apple Pay (this is best done with a finger that Touch ID doesn’t recognize). You can also open the Wallet app and tap your debit/ATM card. Then hold the iPhone near the contactless reader symbol and activate Touch ID by placing a recognized finger on the Home button. If you have one, you can also use your Apple Watch — double-press the watch’s side button to bring up Apple Pay. Finally, enter your PIN on the ATM’s keypad.

Alas, not every ATM has a contactless card reader. Even for those that do, some types of transactions, such as deposits, may still require a physical card. Until the ATMs close all these particular loops, my ATM card will have to remain in my wallet.

Transit Passes — If you live in the right place, such as New York City, London, or Japan, you can use Apple Pay to ride public transit (things have improved significantly since Steve McCabe wrote “Around The World With Apple Pay,” 13 May 2015). Apple Pay support for transit payments helps riders save time, particularly when
transferring from one service to another; can help speed passengers through fare gates; and could even save the transit authority some costs.

Sadly, far too few transit systems support Apple Pay yet. Even in Apple’s home territory of the San Francisco Bay Area, for example, commuters can use a single Clipper Card to navigate over 20 separate transit agencies but can’t use Apple Pay. It would be nice to replace that card with a virtual card in the Wallet app, but that hasn’t happened yet.

Loyalty/Stored Value/Gift/Membership Cards — Department stores, drug stores, and restaurants are starting to see the value of having their loyalty programs appear in their apps or in Apple’s Wallet. Some are placing special offer coupons right in the Wallet app, giving customers one less thing to forget when heading out for the day and increasing the odds of an impulse buy.

Apps like Stocard and Key Ring offer you the opportunity to put all your loyalty cards into one app and may also present information about ads and store sales. These apps may also be able to handle membership cards that have barcodes. For instance, TidBITS publisher Adam Engst was able to lighten his wallet load by adding his Tompkins County Public Library card and others to Key Ring. 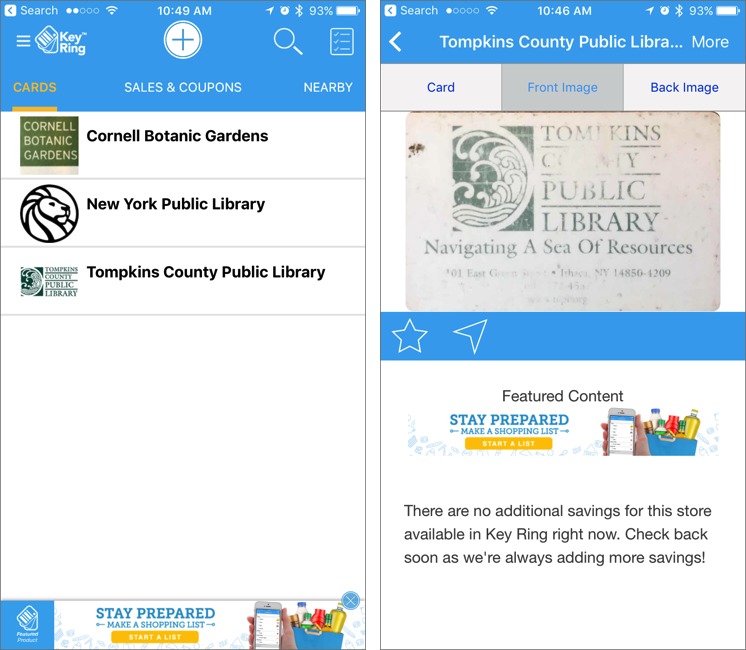 Health Insurance/Emergency ID — Everyone should carry this sort of information because you never know when a medical emergency (such as a bus) will strike. Ouch!

Fortunately, major health care providers offer apps that often include account details or even on-screen replicas of insurance membership cards. Search on your health insurance provider’s Web site to see if they provide such an app.

In addition, Apple’s Health app includes a Medical ID into which you can enter your age, blood type, height, weight, and organ donor status, along with people to contact in case of emergency. 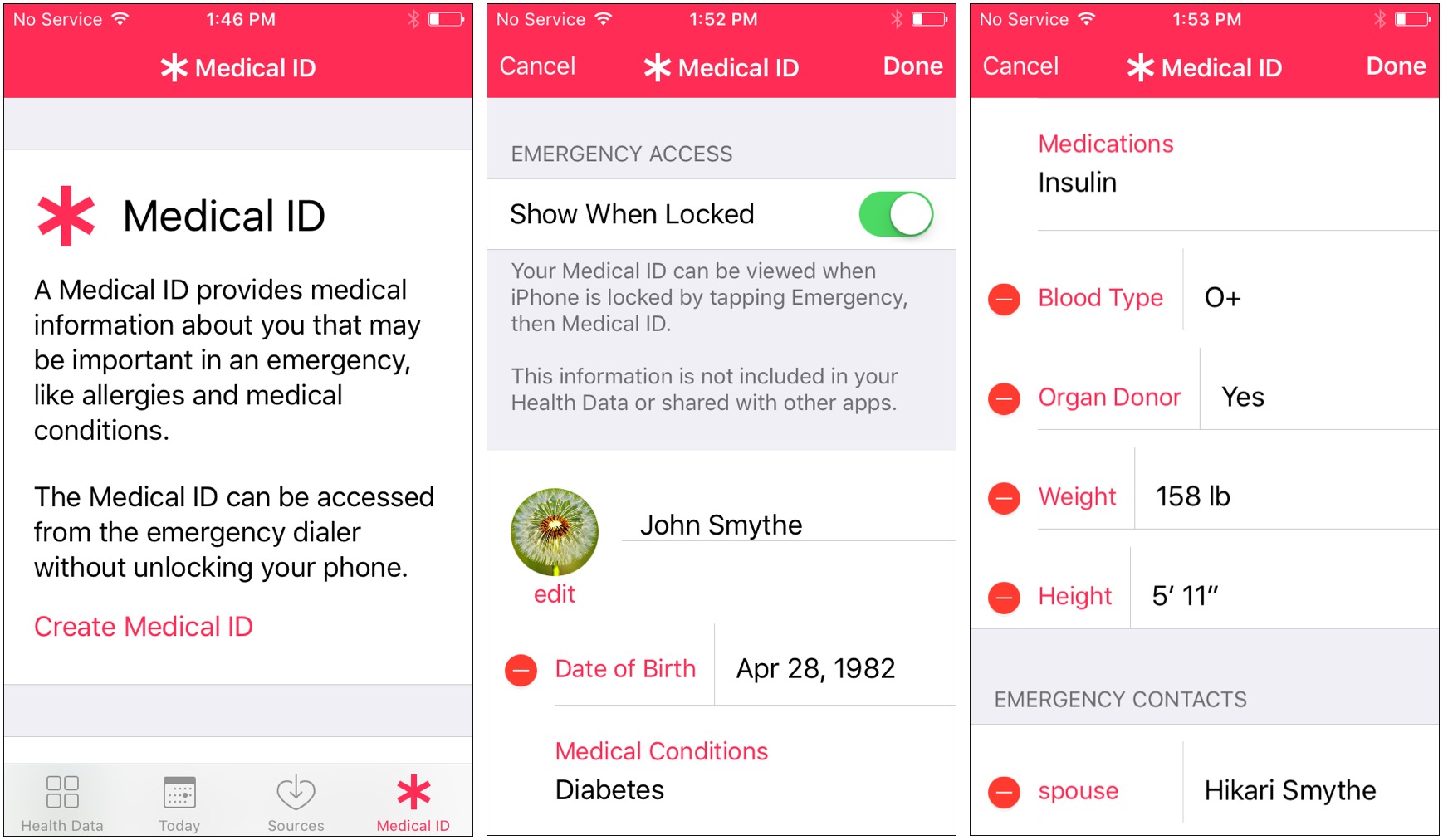 If you’re in an accident, emergency responders can access this information from the iPhone’s Emergency screen (tap Emergency on the Passcode screen) or by pressing and holding the side button on the Apple Watch. 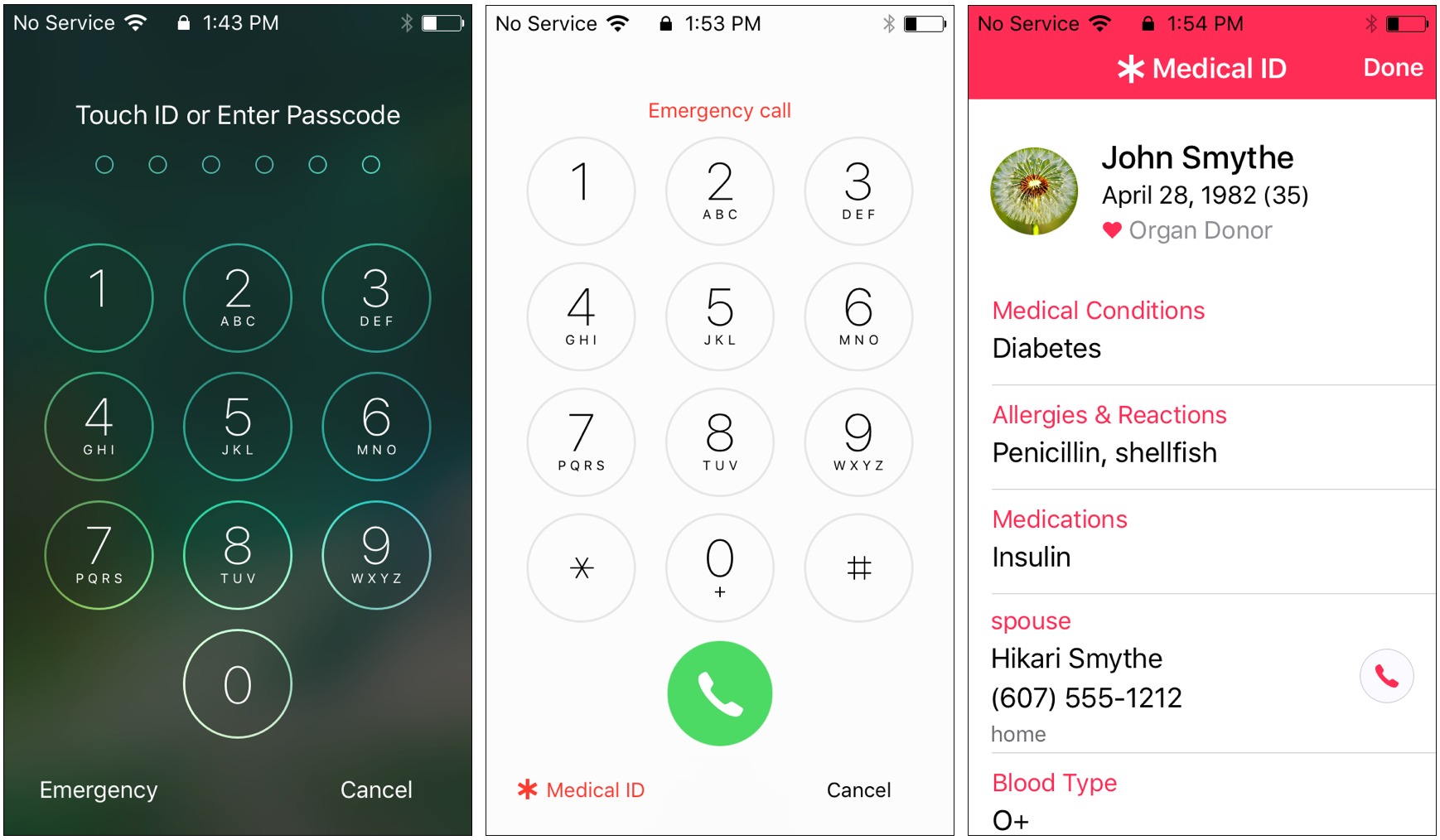 Be sure to tell your iPhone- and Apple Watch-using friends about the iPhone’s Medical ID, since it will be useful only if it contains helpful information and people know to access it.

Government ID — While you could take a picture of your driver’s license and store it on your iPhone, that’s not going to get you very far if you have to present your actual ID card to get into a bar, past the TSA at the airport, or to a police officer who has just pulled you over.

That said, Alabama now offers a digital driver’s license, and quite a few other U.S. states — and other countries — are exploring the possibility.

The idea of replacing passports and driver’s licenses is rife with security and privacy concerns, however. Digital IDs may initially be offered as a complement to traditional plastic or paper forms of identification.

For instance, the Mobile Passport app is authorized by U.S. Customs and Border Protection. It doesn’t replace the need for a passport; it merely permits U.S. and Canadian citizens to submit their passport control and customs declaration information via an iPhone or iPad (rather than fill out a paper form) and then bypass the regular line when entering the United States at selected airports and seaports.

We’re still far from solving these larger tensions surrounding identity, privacy, and security, so we’ll probably have to resign ourselves to carrying physical wallets for a bit longer.

Right now, if I could put all of these options to work, I might be able to downsize my current wallet to just a bit of cash, my driver’s license, a credit card, an ATM card, and a transit fare card.

That would be pretty much everything I need. Except for some hard candy, of course.

Comments About Can Your iPhone Replace Your Wallet?