We live in an era of everyday miracles, though we don’t always appreciate that fact. As comedian Louis C.K. puts it, “Everything is amazing, and nobody is happy.” Not only is broadband Internet nearly ubiquitous, you seldom even need to plug into a network, thanks to the penetration of Wi-Fi throughout the developed world. And heck, you might not even need broadband or Wi-Fi, since 4G LTE cellular Internet access is also widely available.

None of these mundane miracles would be possible without the even less remarkable miracle of the electrical grid. But did you know that you can combine these two to turn your home’s electrical outlets into Ethernet connections? It’s the chocolate and peanut butter of networking.

Running Ethernet over electrical wires isn’t a new technology by any stretch. I remember reading about powerline broadband regularly on Slashdot in the early 2000s, as well as Kevin van Haaren’s overview here a decade ago (see “Trading In-Home Wi-Fi for Powerline Networking,” 9 July 2007). It was once touted as the solution for last-mile broadband connectivity, while simultaneously being derided by ham radio operators who claimed that its RF interference would kill the hobby.

Ultimately, both claims were overstated. Powerline networking evolved quietly but was overshadowed by Wi-Fi, cellular broadband, and fiber-optic networks. Although powerline networking never made it to the big time, it didn’t vanish. Rather, it has become reliable, readily available, and shockingly cheap.

When Wi-Fi Fails — As I wrote in “How to Ensure High-speed Internet Access When Buying a New Home” (18 May 2017), our home’s TV service works via IPTV. So instead of the traditional coaxial connection, our “cable box” uses an Ethernet port for the TV signal.

The problem is that our fiber-optic connection comes in upstairs, and running Ethernet cable to the below-grade TV room would be a pricey proposition. So I didn’t have to pull wire, the ISP’s installers leased me a pair of AirSonics Wi-Fi bridges designed specifically for IPTV.

In my initial testing, everything seemed to work fine — cue the miracle music. But at night, the TV signal would freeze every few minutes. Watching a live baseball game became increasingly frustrating.

After I missed a game-winning home run one night, I went to work troubleshooting the issue. First, I ran Speedtest on my iPhone repeatedly. Whenever the TV connection flaked out, I noticed that the Internet connection had slowed to a crawl, which was distressing. 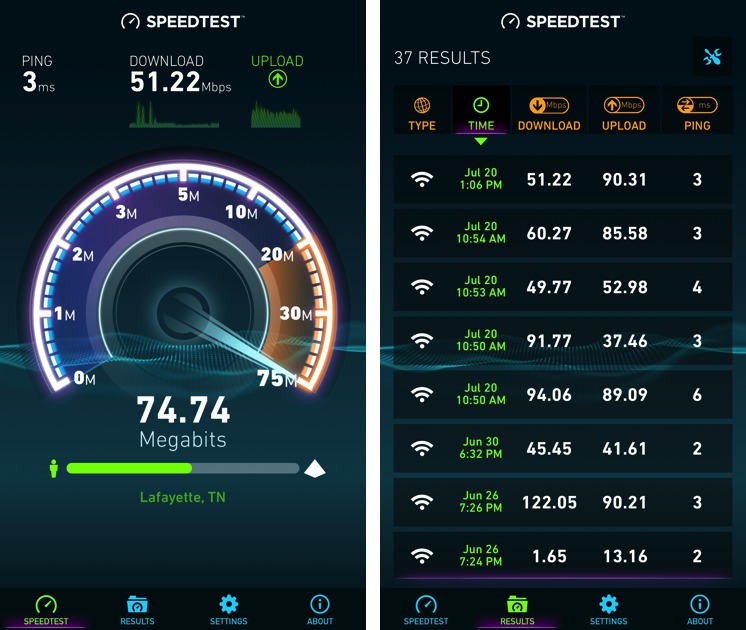 I initially thought that the AirSonics Wi-Fi bridge boxes could be the problem, but it was something my wife said that caused a light bulb to flash in my head: “This only happens when you’re in the room.” It turned out that she was right.

Most routers on the market today offer two Wi-Fi networks: 2.4 GHz and 5 GHz. 5 GHz is faster and is less prone to interference, but 2.4 GHz has greater range.

I knew the AirSonics boxes communicated via a 5 GHz Wi-Fi signal. As a test, I forced every iOS device in our TV room to connect to the 2.4 GHz network on our router. The interruptions stopped almost instantly! I waited 30 minutes and then connected my iPhone 7 Plus to the 5 GHz network. Almost immediately, the TV signal started acting up again. Bingo.

The common-sense approach would have been to just leave all devices in the TV room on 2.4 GHz. But given that iOS seems to connect to networks at random, that’s a tough solution to manage. Nor does it account for other devices entering the room, like when we have guests. “Hi, thanks for coming over to watch the big game. Can you please set your iPhone to connect to the 2.4 GHz Wi-Fi network?”

In a vain attempt to work around the problem, I changed the channels on the router to reduce the interference. That may have helped, but only a little, and the TV dropouts continued.

I decided that a hardwired connection was our best bet.

When you get these adapters, it is absolutely crucial that you install them correctly. Pay careful attention to these highly technical instructions:

It is literally plug and play. 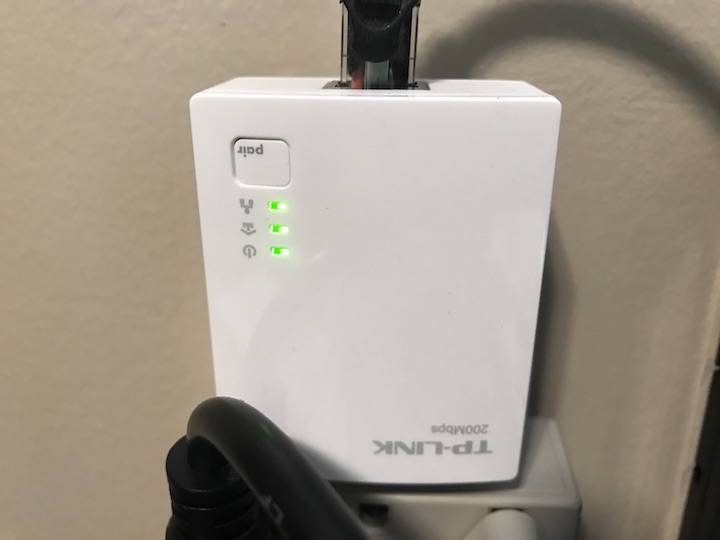 There are three minor caveats:

If you need additional Ethernet drops around your house, you can buy more adapters and plug them in wherever you need them. If you use the optional pairing feature, you’ll have to pair them to the existing adapters, but otherwise installation remains plug and play.

Overall, I’m happy with using the TP-Link AV200 adapters to create an Ethernet network. It’s far more reliable than the AirSonics boxes, and it will be a lot cheaper than leasing them from my ISP for $6 per month.

But it’s not perfect. My TV signal still freezes occasionally, though for far less time than before. I haven’t yet been able to determine why, but it may not be the AV200’s fault. Plus, about once a week I have to reset both adapters by unplugging them and plugging them back in. Annoying, but not much more so than having to power cycle a Wi-Fi router to work around Internet problems, which I’ve also had to do over the years.

As much as Wi-Fi is truly magical when it works — and it does most of the time! — it’s still not as reliable as a direct Ethernet connection between devices. But where pulling wire through walls and floors is difficult or expensive, it’s worth trying a powerline Ethernet adapter like those from TP-Link.